Life is made up of countless decisions, moments that branch our paths this way and that. Occasionally, we encounter a crossroads that leads to dramatic and instant outcomes. But between these momentous occasions, we walk through an ether of small choices and seemingly random events.

While dramatic shifts and inflection points matter, most of life accrues through the little choices we make. This is a story of the small decisions – and a serendipitous interaction – that led to something wonderful in Ames, Iowa: local peppers in a delicious burrito. 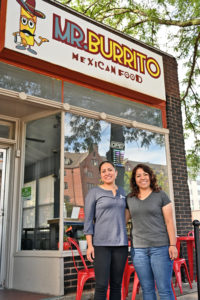 Sisters Berenice and Daisy Valderrabano, owners of the beloved Ames taqueria Mr. Burrito, have their roots in farming. They grew up raising cattle in Puebla, Mexico, and their father also worked seasonally on a Texas horse ranch. He eventually saved enough money to bring the rest of the family to the United States.

In 2003, the family found an opportunity in Ames and moved north to work in, and eventually buy, the restaurant that became Mr. Burrito, located in the city’s Campustown area. “My father knew Iowa was the place for us to have opportunity with hard work,” Berenice recalls.

Founded in 2010 with their parents, and now owned by Berenice and Daisy, the taqueria’s menu is built on family recipes brought from Puebla by their mother. They knew the idea would work “because my mom cooked really delicious food,” Berenice says. When you order a meal from Mr. Burrito, the peppers’ color draws the eye – vibrant reds, yellows and oranges, or a deep, healthy green, all flaked with the black confetti of char. Using only fresh ingredients, the Valderrabanos strive to take advantage of special opportunities to source produce. At the right time of year, if the summer weather has been kind and the peppers prolific, these peppers come from Kate Solko at Root to Rise Farm, less than 6 miles away. 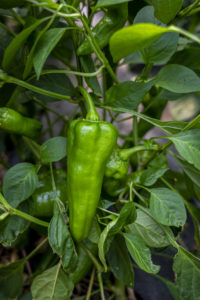 The Valderrabanos have always wanted to use local produce, but the opportunity never arose – until the summer of 2021 when they chanced to connect with Kate. The two Ames businesses crossed paths at a time when Kate was dealing with a unique pepper problem: one of prodigious pepper abundance. The unexpected bounty stemmed in part from Lucas Bleyle, an Ames native studying sustainable food systems at Purdue University who interned with Kate and designed a high tunnel trial for pepper production. Kate’s decision to try this new pepper-growing method proved highly successful at boosting pepper yields.

Ideal pepper-growing weather that season combined to create a perfect storm for prolific pepper growth. Kate and her team found themselves harvesting thousands of pounds of peppers – and facing the quandary of how to market that much product.

“We love food, we love cooking, we love really beautiful food,” Kate says. “The path to accessible, high-quality food was working for it.” 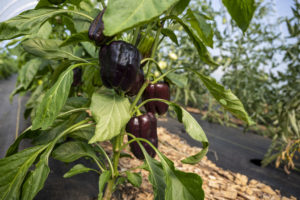 Kate has been farming for 13 years, the last three at Root to Rise Farm on the northern edge of Ames. The farming bug bit while she was searching for produce for her family. At the time, the best local food was simply out of her price range. Undeterred, she decided to create the solution.

“We love food, we love cooking, we love really beautiful food,” Kate says. “The path to accessible, high-quality food was working for it.” Kate started participating in a workshare CSA. In exchange for her labor in the field, she got a CSA share at a reduced price. It was a small decision that led to a personal revelation: Working in the earth fed both her body and her spirit. Kate has been farming ever since, turning it into her full-time profession.

When she started Root to Rise Farm in 2019, Kate decided to market through a CSA and farmers market. Since launching the farm, her CSA has more than doubled from 30 to 70 shares, and her stall at the Ames Main Street Farmers’ Market is always busy. But even split between her boxes and farmers market sales, she couldn’t move enough peppers the season she met the Valderrabanos. Needing an outlet for her tidal wave of produce, she turned to wholesale. 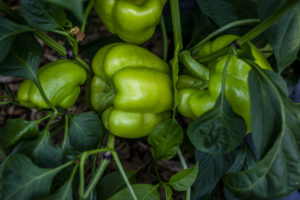 “To be honest, wholesale is hard for our production model. We barely make any profit from it,” Kate says. “The reason it’s profitable at all is because it’s surplus.” Because of this, wholesale marketing is not built into her arm production plan and only happens if there is an unexpected bounty she can’t sell elsewhere.

“It’s not consistent, so it’s one of the reasons we appreciate the wholesale customers we do have,” she says. “They’re so flexible. It’s almost like they’re on call.” Kate has sold to restaurants and food co-ops throughout Ames and Des Moines. The Valderrabanos, however, have bought the majority of Kate’s surplus produce. The collaboration has helped prevent an abundance of peppers – and their revenue – from going to waste.

Waste Not, Want Not 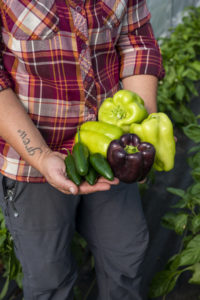 Preventing this food waste is important to Kate. The United Nations estimates that nearly half of all fruits and vegetables are wasted every year. In the United States, losses at the farm level range from 15% to 35%. If food waste were a country, it would be the third largest emitter of greenhouse gas in the world.

Kate strives to avoid contributing to that statistic. A large reason why food gets wasted comes down to appearance. Consumers have come to expect produce that looks a particular way – often, a stereotypical, homogenized version of the diverse shapes, sizes and even benign blemishes that naturally occur. Produce that strays too far from artificial aesthetic standards is colloquially called “ugly produce” – and though it’s perfectly edible, many consumers perceive it to be flawed and are unwilling to buy it. 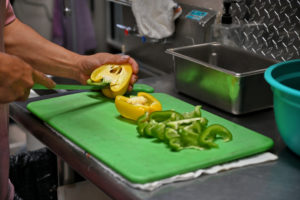 But Kate says the Valderrabanos are knowledgeable buyers who aren’t so prejudiced on pepper appearance. “One of the great things about Mr. Burrito, because they are chopping and sauteing peppers, they were able to take seconds peppers that are unmarketable because of shape.” Besides the challenge of selling oddly shaped peppers, Kate ran into an unexpected marketing problem with her farmers market and CSA customers: their ingrained belief that pepper shape indicates flavor. Carmen peppers are wildly productive, Kate explains, “beautiful and sweet,” but they taper at one end, much like an oversized chili pepper.

“I could not convince people at farmers markets that Carmen peppers were not hot,” she says. “People believe all bell-shaped peppers are sweet and all pointed peppers are hot.” 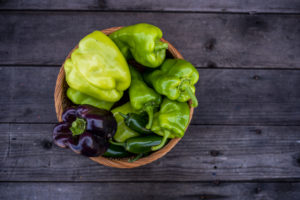 The Valderrabano sisters know better. Berenice says that because they chop and grill the peppers fresh every day, accepting a non-standard shape is no barrier to them. “We are happy to use any pepper that tastes good and fits our budget. It was an easy choice to take Kate’s peppers.”

Here we arrive at the confluence of these two paths we’ve been following. Nobody remembers exactly how it happened, but Berenice and Kate recall Facebook being involved. Kate had posted about her pepper problem, and the platform’s algorithm put that post in front of Berenice just as she was scrolling by and in need of local produce. Once the connection was made, the choice to work together was easy.

Motivated in part by her own experience growing up in a farm family, Berenice says her goal is to work with more farmers to get local ingredients on the menu. Doing that, however, will require overcoming some notable challenges. Price is one barrier. Farmers have to be able and willing to sell a significant quantity of vegetables at a wholesale price, which isn’t always an option for small-scale organic farmers with tight margins.

Cost is also a big concern for Berenice and Daisy. “I feel like organic is too expensive for us,” Berenice says. “I don’t want to raise prices.” The sisters want to keep costs low for the community, and are also keenly aware that the majority of their customers are college students with limited funds. Because Kate’s peppers were surplus, she was able to agree to a price point the Valderrabano sisters could afford.

“I feel like I have to help other small businesses,” Bernice says, highlighting a desire to “give back to the community and help other people grow.” 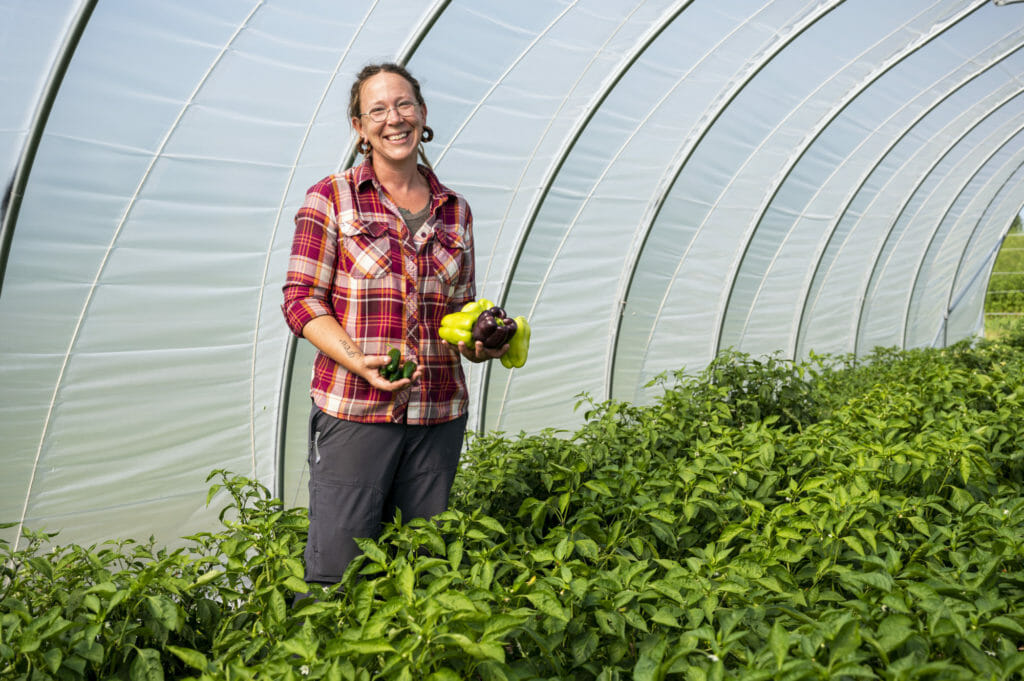 Perhaps more significantly, though, the Valderrabanos lack the relationships that could help them find farmers to partner with. Berenice is not sure where to look besides farmers markets. “I don’t go to farmers markets much since I work in the restaurant,” she says. “So I don’t make those connections.”

While there are various online directories listing local producers (PFI has one on our website), there are few such resources focused on finding local wholesalers. This means the Valderrabanos would have to inquire with each individual producer, something they lack the time to do.

Despite the broader challenges Berenice and Daisy face to using more locally raised ingredients, their connection with Kate is a positive first step – the result of decisions each made that enabled their paths to cross and a relationship to grow and blossom. For the Valderrabanos, it was the decision to browse social media at a particular time.

For Kate, it was the decision to launch a pepper-growing experiment when she did – and then to post on Facebook about her need for takers of surplus peppers. While neither could foresee the outcome of those decisions, the little choices they made – and continue to make each day – are growing change.

Beyond the immediate benefits to their two small businesses, by working together, Berenice, Daisy and Kate are also building community. For Berenice, supporting and creating solidarity with other small businesses is especially important.

“I feel like I have to help other small businesses,” she says, highlighting a desire to “give back to the community and help other people grow.”

Kate expresses gratitude for the Valderrabanos’ support and knowing she is not alone, especially when facing difficulties. “They really step up in those times,” Kate says. “It helps keep us afloat. I appreciate them deeply.”

Next article: “Farming for Those Downstream”

Rising to a Local Foods Challenge