When James Rebanks’ “Pastoral Song” was first published under the British title “English Pastoral” in 2020, there was an overwhelming response from many readers that it should be required reading in every school. 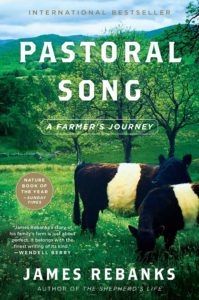 It does indeed include important information, but this book should not be read as an assigned educational task. This book should be read for the pleasure of the language it contains and the images and feelings it conjures. This is a personal and reflective piece of extraordinary work from an ordinary farm, both remarkable and deeply relatable to anyone with an agricultural background.

“Pastoral Song” follows James Rebanks’ New York Times bestselling memoir “The Shepherd’s Life,” and centers on a small sheep farm in northern England. It was written while the centuries-old farm passed to the next generation amid changes in climate, economy and political priorities in Great Britain. After experiencing the farm under the watch of two previous generations, James finds himself at last responsible for the future of the farm. “I had inherited a complex bundle of economic and ecological challenges,” he writes, “and that, perhaps, was what it really meant to be a farmer.”

The book is written in three parts: “Nostalgia,” “Progress” and “Utopia.” The first part covers James’ childhood when his grandfather was still farming and passing traditional knowledge to his grandson. These formative memories provide us with an understanding of one way a farm can work and the values instilled in James at a young age.

The second part describes changes made to the farm while James’ father was at the helm and strove to keep the farm by becoming more efficient and modern. It does a good job of demonstrating the decisions farmers face and discussing why many go in a particular direction. The final part of the book describes the direction the farm is currently taking and what it could become. It details the role agriculture could and should play in Britain’s landscape, sets priorities and talks about how to get there while also acknowledging existing limits.

James Rebanks keynoted PFI’s 2018 annual conference while he was working on this book. He had the chance to talk to farmers from all over Iowa and hear our stories of farm transitions, management adaptations and landscape changes. When I met him, he felt familiar. Although he is from thousands of miles away and lives in mountains by Iowa standards, our small farming communities and day-to-day activities are comfortingly similar.

Characters described in his books could easily walk into the local co-op and pass a few hours waiting on the weather. James knows and struggles with the same big questions we ask ourselves. How can agriculture meet all the world’s needs at once? Can we provide feed, fuel and fiber for everyone while supporting healthy, diverse ecosystems, stopping climate change and making a living for a farm family? Where do we set priorities and make trade-offs?

It is inspiring to see the same old questions from a new perspective. The PFI conference theme when James spoke was “Revival,” reflecting efforts here to revitalize rural communities and bring back ways that have all but vanished from the landscape. But James is still trying to hold onto something that has never really been lost over hundreds of years. His farm and community are encountering similar global pressures, but on a different timeline and with a very different history of agricultural practices and relationships with natural habitat.

The similarities and contrasts are enough to help us look at our own problems and solutions from a different angle. As James defends his own family’s farm, he covers basic regenerative farming mechanisms, economic significance and societal tensions. He so elegantly puts into words a lot of the stuff many of us farmers do not have the skill to articulate.

“Pastoral Song,” published in the U.S. in 2021, was recently released in paperback and is available as an audiobook for those of you fond of British accents. You can follow James on Twitter by searching for @herdyshepherd1. James’ wife, Helen, is not an author, but you can see her between every line of this book and follow her on Instagram as @theshepherdswife.

Ranae Dietzel is an agronomy data scientist and fourth-generation farmer. Her family, including husband Kevin and two children, manage a grass-based dairy at Lost Lake Farm near Jewell, Iowa. They follow regenerative practices and turn all milk from their cows into cheeses they produce on the farm.

Farming for the Long Haul