Singing the Praises of a Promising Perennial 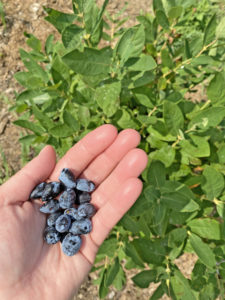 Drawn to the taste and ease of growing honeyberries, Jeff Sindelar has become a vocal champion for this little-known and hard-to-define berry

The prompt is his cue to effuse about the little-known fruit he and his wife, Deb Sindelar, grow at Deb’s Berry Farm, the business they operate near Newhall, Iowa.

Jeff’s enthusiasm then spreads – igniting curiosity and excitement among those listening. How can a berry elicit such emotion?

To the question of what a honeyberry is, there are several answers. Honeyberries are the fruit of a woody, perennial shrub, a non-invasive cousin of the honeysuckle and a native of northern regions of Russia and Japan, where the berries are known as haskaps. With cold hardiness to minus 55 degrees and flower frost tolerance to the mid-20s, honeyberries are an exciting, season-extending crop option for Iowa producers. The berries ripen earlier than the earliest strawberries and last into mid- to late June.

Honeyberries have a bluish-purple hue and a tender skin reminiscent of blueberries, but the fruit are more oblong in shape, from ½ inch to 1 inch long, and growers consider the plants much more adaptable and easier to grow than blueberries, which require acidic soil.

Most compelling, however, is the taste. 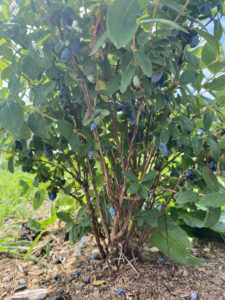 “Honeyberries are similar to, yet very different from, blueberries,” Jeff says. “They have kind of a general berry flavor, but with a kick. They have a little bit of a zing.”

Jeff and Deb planted their first honeyberries in 2011. At the time, they were experimenting with a range of other perennial berries, including blueberries, and honeyberries were less a focus of their time and efforts. Blueberries proved frustrating to grow, however. Today, honeyberries are a focal point of their production, along with red currants and hardy kiwi – a smaller, smooth-skinned relative of the fuzzy kiwi – and asparagus.

“Honeyberries are a great option for someone who doesn’t have luck growing blueberries but wants something kind of similar,” Jeff says. “For me, blueberries are a pain. They’re hard to get right in terms of soil and moisture needs, so I ripped out all my blueberries and planted honeyberries instead, and they have just been great for me.”

Alice McGary, who owns and operates Mustard Seed Community Farm near Ames, Iowa, also raises honeyberries and finds them to be a nice addition to her
operation. “I love eating honeyberries,” Alice says. “They’re tangy and exciting to taste – but they are also easy to grow. They’re cold-resistant and very winter hardy, and they’re shade-tolerant. They don’t need special soil amendments and can handle quite a lot of water. The only challenge, besides keeping the birds off, is that people don’t know them.” 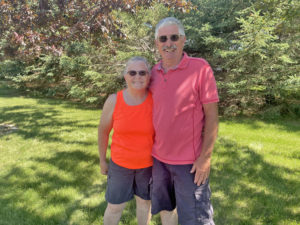 Jeff and Deb currently market their fresh berries, honeyberry juice and jams through Facebook, where they can post as needed and get to know their customers on an individual basis. Prior to the COVID-19 pandemic and the myriad changes it brought about, Jeff and Deb consistently sold out of their honeyberries through marketing on Facebook.

“We were tickled pink with the amount of honeyberries we were selling, but customers disappeared with the pandemic,” Jeff says. Inspired by the success selling his hardy kiwis to local schools, he tried to find a new market for his honeyberries there too, bringing samples for the cooks and students to taste.

As Jeff and Deb grow their honeyberry business, questions remain. Jeff hopes that finding the answers, such as the best temperature to store honeyberries, will create new markets. Details like that, he says, will be vital to selling the berries to local groceries.

Experimenting With Varieties and Planting Methods

Jeff and Deb’s success with honeyberries stems from the fact that Jeff has done his homework.

Since venturing into honeyberries, Jeff has tried growing dozens of honeyberry varieties from dozens of retailers, with sources ranging from big-box stores to special mail-order companies. What was supposed to be a retirement project after Jeff’s career in building maintenance at the University of Iowa has grown into a passion with real potential. Currently, Jeff and Deb grow over 200 honeyberry bushes representing 22 varieties.

“We’re winnowing those down, though!” says Deb, who, in addition to helping manage production, serves as the operation’s chief jam maker, baker and honeyberry juicer.

The plants they’re culling tend to be the older, less productive varieties that yield 2 pounds or less of berries in a season. In their place, Jeff is planting more of the berries with flavor he really likes. “My top five varieties are ‘Solo,’ ‘Keiko,’ ‘Opus,’ ‘Beauty’ and ‘Blizzard,’” he says. “You have to send away for these, and they are all Japanese-based varieties, but these are the ones I really love to eat. And they do better in Iowa.”

Jeff is also one of four farmers, including Alice, conducting a honeyberry research trial with PFI’s Cooperators’ Program, funded by a U.S. Department of Agriculture Specialty Crop Block Grant. The research explores honeyberry shade tolerance during establishment and the first year of fruit production.

In 2021, participants planted honeyberries in randomized, replicated plots in full sun and under shade structures. The first year of data (on vegetative metrics) will be reported at PFI’s Cooperators’ Meeting in December, and the results should help guide future honeyberry management decisions.

Beyond his own experiments, Jeff seeks out growers in more northern areas to learn from their honeyberry growing, processing and marketing experiences. Recently, he and Deb traveled to North Dakota where they got some honeyberry wine and learned how honeyberry growers there market their products, the prices they charge and the varieties they use.

“One guy is making juice and he knows exactly what varieties to use for what purpose,” Jeff says. “For juice, he likes ‘Solo’ and ‘Keiko.’ He sells a 12-ounce container of honeyberry juice for $30 – and he sells out!”

Bringing that knowledge home to share with other berry growers in Iowa is one way Jeff hopes to spread the word about honeyberries. To that end, Jeff hosted a PFI field day at his farm in June. The event let him share the full range of his operation, from plantings to products, and gave the public a chance to learn in-depth about this unfamiliar but promising perennial.

Attendees ranged from commercial berry growers, to hobbyists with a couple of bushes, to the completely uninitiated. One highlight of the field day was the chance to taste honeyberry juice, juice blends, jam, baked goods and fresh berries.

The network of honeyberry enthusiasts definitely grew that day.

Mark Westbrock of Solstice Farm near Waverly, Iowa, is another budding enthusiast. In spring 2020, he added honeyberries to his farm’s apple orchard in a unique way: He interplanted them between the rows of trees. He was inspired to do so after seeing the wide aisles (12 to 16 feet) between rows after he had planted 90 apple trees and 10 pear trees on semi-dwarf rootstocks.

Mark had recently attended a honeyberry presentation by Bernis and Jim Ingvaldson of Honeyberry USA at PFI’s 2020 annual conference and thought honeyberries sounded easy to grow and adaptable enough to his farm’s clay loam soil.

“The honeyberries have been easy to manage,” Mark says. “We get enough production for our own consumption right now. Once they are more established and producing more fruit, we hope to experiment with making honeyberry-infused cider.”

So far, Mark is pleased with the decision and excited about what may lie ahead with the berries.

Spreading this enthusiasm is partly what motivates Jeff to continue his evangelizing. As he connects with more Iowans like Alice and Mark who are curious about honeyberries, Jeff sees a horizon of possibility for these versatile and farmer-friendly perennials. He hopes their enthusiasm will be just as infectious as his.

“Oh, mercy,” he says. “I’m just ecstatic about the number of people interested in honeyberries.”