Sam Bennett and his wife Danielle are PFI members from Galva, Iowa, in Ida County. They raise corn, soybeans and small grains as part of a larger six generation family farm (Bennett Farms). Six generations is a long time to get good at something, but Sam and his family are constantly looking for ways to improve. 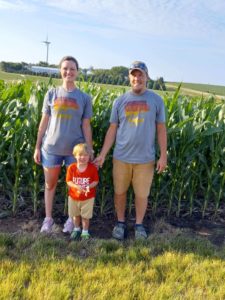 Danielle and Sam Bennett pose with son Harry on their Galva, Iowa, farm.

Over the last few years, Sam has watched with interest as fellow on-farm research cooperator Dick Sloan, of Rowley, Iowa, has conducted multiple trials exploring neonicotinoid pesticide seed coatings – commonly referred to as seed treatments – and whether they offer any benefits for soybeans. After seeing the results of Dick’s trials,  Sam finally decided in 2021 to test seed treatments on his own farm.

“The goal was to build on Dick’s research,” Sam explains. “Dick is obviously in a different part of the state than I am, but he also plants later. We wanted to see if the seed treatments were valuable for early planting.”

In general, a full soybean seed treatment includes a fungicide, a nematicide and an insecticide – typically a neonicotinoid product. With his research, Sam wanted to find out how using only the fungicide, but not the nematicide and insecticide, would affect his soybean yield and profitability. “I had a good sense from Dick’s trials and other research that the treatments weren’t necessary in late-planted soybeans,” Sam says, “but I wasn’t convinced about early planted beans.”

Working with PFI’s Cooperators’ Program and fellow farmers Alec Amundson of Osage, Iowa, and Steve Saltzman of Ames, Iowa, Sam set out to design an on-farm trial that could test the agronomic and financial benefits of using soybean seed treatments.

Chemical seed treatments are growing in popularity. The idea behind the approach is simple: By coating seeds with chemicals that kill fungi, nematodes and insects that might harm crops, plants gain critical defenses at germination and within the first few weeks of growth.

But there is little evidence these treatments actually boost yields. The consensus is starting to widen, and Dick’s on-farm trials add to the growing body of research: When he compared treated and non-treated soybean seed on his own farm, he saw no difference in soybean yields. 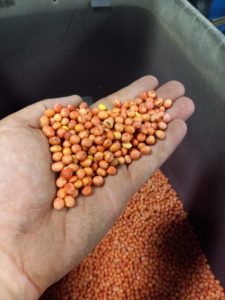 Neonicotinoids (often called neonics) are one class of insecticide often applied as seed treatments. According to the Xerces Society, an international invertebrate conservation nonprofit PFI frequently works with, neonics are perhaps the most widely used class of insecticide on the planet. The neonic family includes several different chemicals (imidacloprid, clothianidin, thiacloprid and thiamethoxam are some of the most common), and even more trade names: Poncho, Gaucho, Admire and Cruiser are just a few.

Neonics are water-soluble, which means plants like soybean seedlings can absorb the chemical through their roots. The insecticide then spreads throughout the plant, making it toxic to insects that feed on it. On paper, this systemic action makes neonics look valuable to farmers – proponents argue it’s a way to deliver whole-plant protection quickly and easily without additional field work.

When neonics first came on the market in the mid-1980s, they were hailed as an environmental solution to challenges with existing insecticides. Older classes of chemicals like organochlorines (DDT) and organophosphates (malathion, chlorpyrifos) were immediately toxic to vertebrates, including birds and mammals. Neonics are much less so. Previous classes of insecticides were also aerially applied, resulting in regular drift incidents; in contrast, neonics applied as seed coatings have a much less overt risk of leaving the area they’re intended for.

Time has revealed, however, that the traits that make neonics appealing as seed treatments are also causing unintended environmental harm. According to the Xerces Society, the same water solubility that confers whole-plant protection against insect damage also makes neonics especially prone to migrate with water as it moves across fields and through tile drainage.

While this kind of pesticide drift moves differently than aerially applied chemicals, the end result is the same: potent chemicals end up in unintended places, harming and killing non-target species in the process. Beneficial insects like pollinators are especially vulnerable. Because plants absorb the chemical systemically, neonics can show up in pollen and nectar, poisoning bees as they forage. For ground-nesting bees and wasps, another exposure route is through direct contact with contaminated soil.

Neonics also persist for a long time in soils and in water. Because these chemicals indiscriminately kill any invertebrates, not just those that damage cash crops, they can pose threats to species long after they’ve moved from where they were originally applied. In particular, there is growing alarm over the impacts of neonics in wetlands and other aquatic environments, where even low concentrations have the potential to ravage aquatic invertebrate populations. Because those species are a critical food resource for fish, amphibians and birds, when invertebrates decline, animals higher up in the food chain also suffer.

As an avid outdoorsman, the potential wildlife impacts of neonics weren’t lost on Sam when he decided to conduct his on-farm trial. “I’m passionate about the environment and pollinators and don’t want to be responsible for damage that was unnecessary,” he says. “But I also don’t want to misuse the tools and see them regulated or go away down the road as a result.”

The human health impacts of using so much treated seed also concern him. “I think a lot about how much seed dust I’m breathing in every year,” Sam says. “It can’t be good. What kind of chemicals am I breathing in when I pack the bean planter? It used to be that we’d shove all our corn seed into the pick-up if it was going to rain or something, and inevitably someone always got sick. Why would I do that to myself if I didn’t have to?”

To conduct their trial, the first thing Sam and the other cooperators had to do was find the right soybean seed – something easier said than done. Most seed dealers default to a full treatment program that includes a fungicide, nematicide and insecticide. Occasionally, they will offer untreated seed. Sam and the others, however, wanted to test seed with the same genetic traits but two different treatment programs: a full treatment, which would represent the status quo, and a partial treatment consisting of just a fungicide. “When I first inquired into different treatment types for soybeans, the dealer said no,” Sam says. “I had to stay persistent, but I had done the research and knew that products were available.”

For farmers seeking custom seed, Sam has a few tips. Because some seed products come in large quantities, he says dealers aren’t going to buy a lot of seed if they don’t have a market for it. For the same reason, purchasing small quantities of seed with non-standard treatments might be harder than purchasing larger quantities. “If they still have trouble finding non-standard seed treatments or untreated seed, they might have better luck with a regional brand.”

You have to take some responsibility for knowing what you’re using on the farm – is it harmful or not? Why would I be using it if I didn’t need to?”

In the end, he managed to find and secure a seed that included the same fungicide treatment without the nematicide and neonicotinoid insecticide. “You have to build a relationship with your dealer, and you have to approach them in the right way,” he says. “I had to start the conversation earlier, in late summer, early fall, and I bought full-box or full-pallet quantities.”

During harvest in fall 2021, Sam and Steve Saltzman found no yield difference between the treatments: Soybeans treated with just the fungicide had statistically similar yields to those that had all three seed treatments. They also ended up saving money by skipping the neonicotinoid and nematicide treatments in a part of their fields. Steve saved $3 per acre on treatments and Sam saved $10 per acre.

Their results echo what Dick’s on-farm research has consistently shown – that it’s possible to forgo nematicide and neonic insecticide seed treatments without losing yield while saving money in the process. Sam notes that one trial isn’t enough to say for sure that soybean seed treatments aren’t worth it. But his results add to a growing body of research that indicates chemical seed treatments may only improve yields in narrow and infrequent scenarios.

What’s next after his trial? Sam says he is still planting fully treated seed, but he plans to slowly transition over the next several years. “You have to start small, try it first somewhere on the farm and then grow over time.”

Another complicating factor for Sam is that his dealer offers a replant guarantee for soybeans – but only if he purchases the fully treated seed. And while he hasn’t had to replant often during his farming career, that type of insurance is hard to pass up. Beyond the extra reassurance, perceived or otherwise, that farmers feel when planting seed with neonic and nematicide treatments, replant guarantees could be a major factor in farmers’ decisions about using treated seed.

Sam encourages other farmers to do their homework, think about what they’re paying for at the dealer and weigh the pros and cons themselves. “There never appeared to be options until I started looking hard for different treatments,” he says. “For most, treatment sounds like really cheap insurance, and we don’t think about potential negatives, including the extra cost.”

“Saving a few dollars is nice,” Sam adds, “but it’s more about taking ownership of what’s applied to our farm. You have to take some responsibility for knowing what you’re using on the farm – is it harmful or not? Why would I be using it if I didn’t need to?”