Cover cropping typically involves growing vegetation between the harvest and planting of cash crops. Companion cropping or living mulch strategies, on the other hand, involve growing cash crops alongside cover crops (e.g., the cover crop is not terminated). Research in the Midwest over the past 20 years has uncovered both the challenges and opportunities with this approach.[1] Challenges include competition for nutrients and moisture between the cash crop and companion, which can severely reduce cash crop yield.[2–5] In other words, the companion behaves like a weed. This challenge can be partially overcome by careful variety and species selection as well as suppression of the companion.[1,6] The opportunities and benefits of living mulch systems mirror those commonly associated with perennial groundcover: reduced soil erosion; improved soil fertility; improved soil water and temperature dynamics; forage for grazing livestock.

Jack Boyer and Dick Sloan have incorporated small-grains crops into their rotations in recent years, which affords them the opportunity to use legume cover crops like red clover. Typically, the clover cover crop is terminated prior to planting corn and research suggests between 50 and 150 units of N fertilizer can be replaced with this practice.[7–9] In this project, Boyer and Sloan wanted to compare clover as a living mulch in their corn with the typical practice of terminating the cover crop. Weed pressure on both farms necessitated a herbicide pass in June that terminate the clovers; the resulting experiments effectively compared termination dates: at-plant vs. delayed. 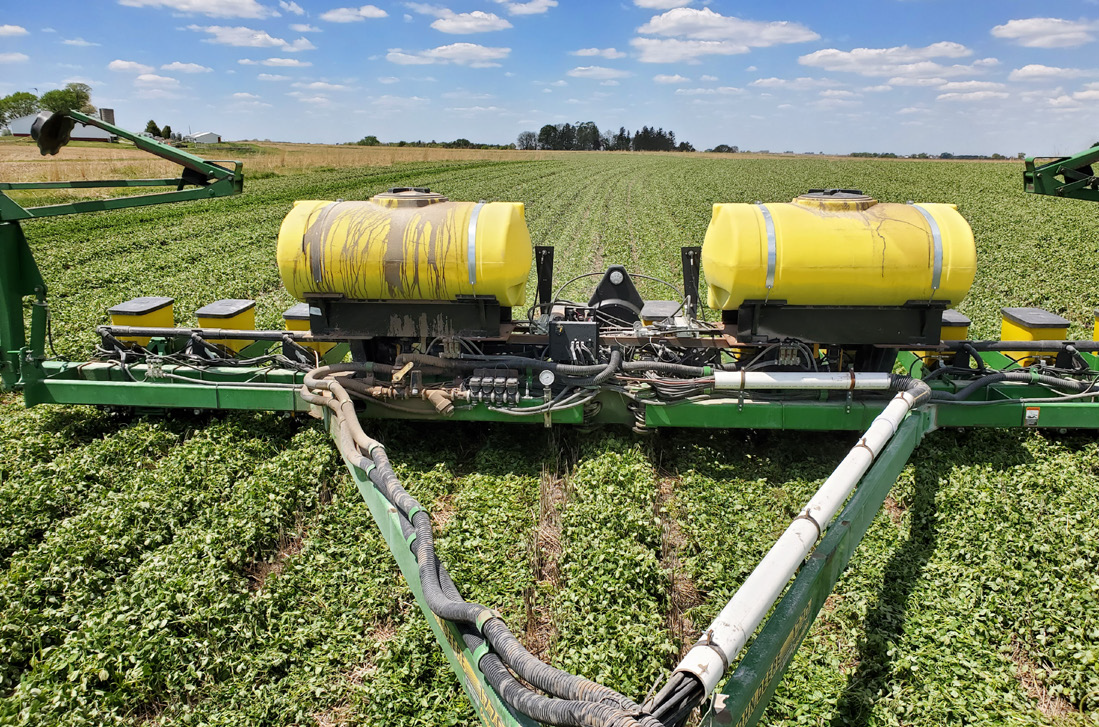 Dick Sloan planted corn on May 13, 2021 into red+alsike clover that was established with a triticale crop in April 2020.

Boyer and Sloan conducted similar, but slightly different, experiments. Both raised a winter small grain in 2020 in order to establish the clover cover crop.

Sloan seeded his entire experiment to a blend of red clover and alsike clover and compared the following two treatments: 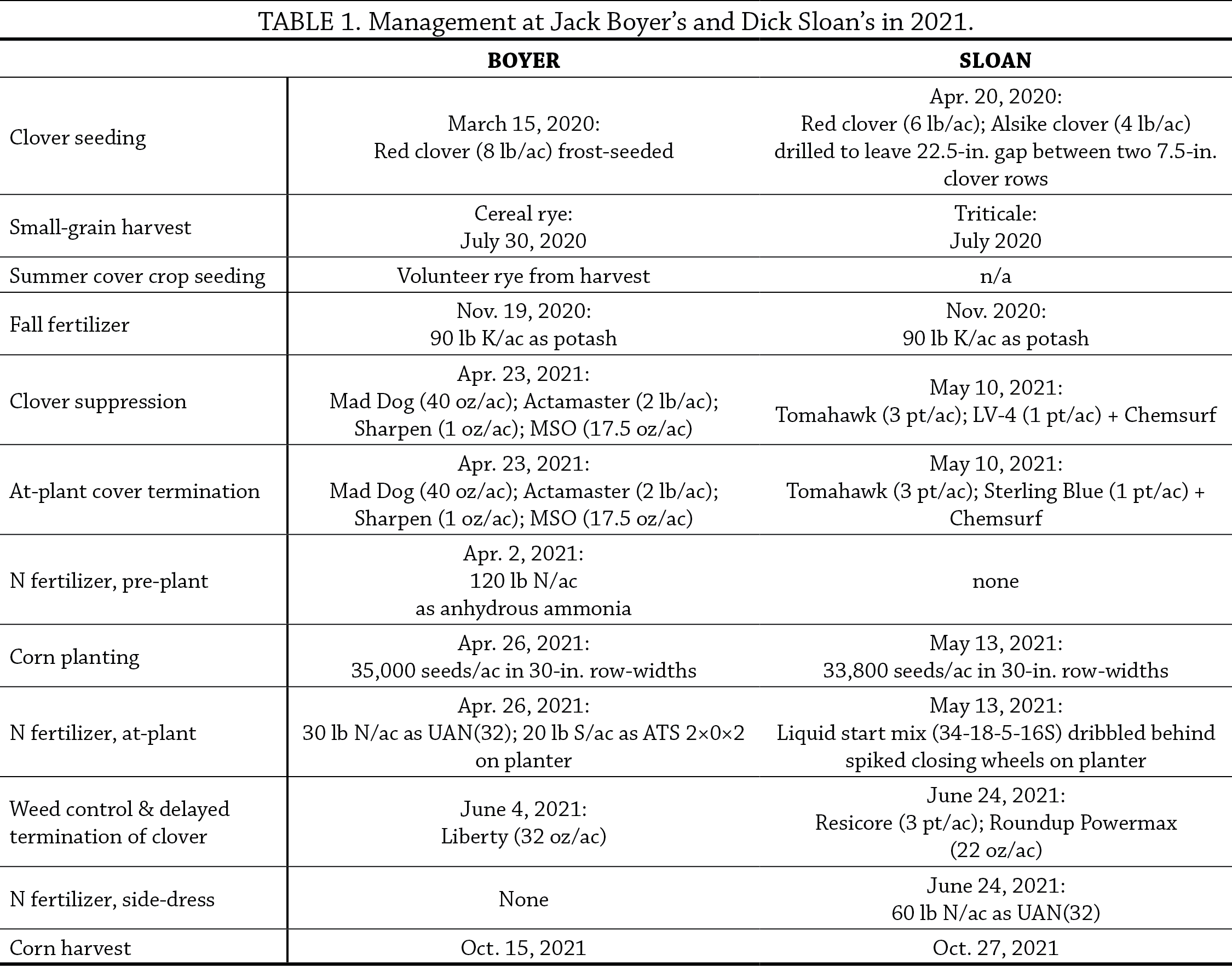 In early June 2021, both Boyer and Sloan observed heavy weed pressure (waterhemp, marestail) and elected to apply another round of herbicide. These applications ultimately terminated the clover in the ‘suppress’ treatments. Thus, the experiments effectively compared cover crops terminated at corn planting with cover crops terminated after corn emergence (delayed termination).

Sloan collected samples of clover biomass from two representative locations (1 ft × 1 ft) in the field near the time of clover suppression and termination (May 20, 2021). Sloan weighed the samples after allowing them to air dry for 5 weeks. Sloan also collected corn stalk samples for nitrate assays on Oct. 10 and conducted stand counts in each strip just prior to harvest on Oct. 25. Boyer and Sloan harvested and recorded corn grain yields from each individual strip on Oct. 15 and Oct. 27, respectively. Grain yields were adjusted to 15.5% moisture. 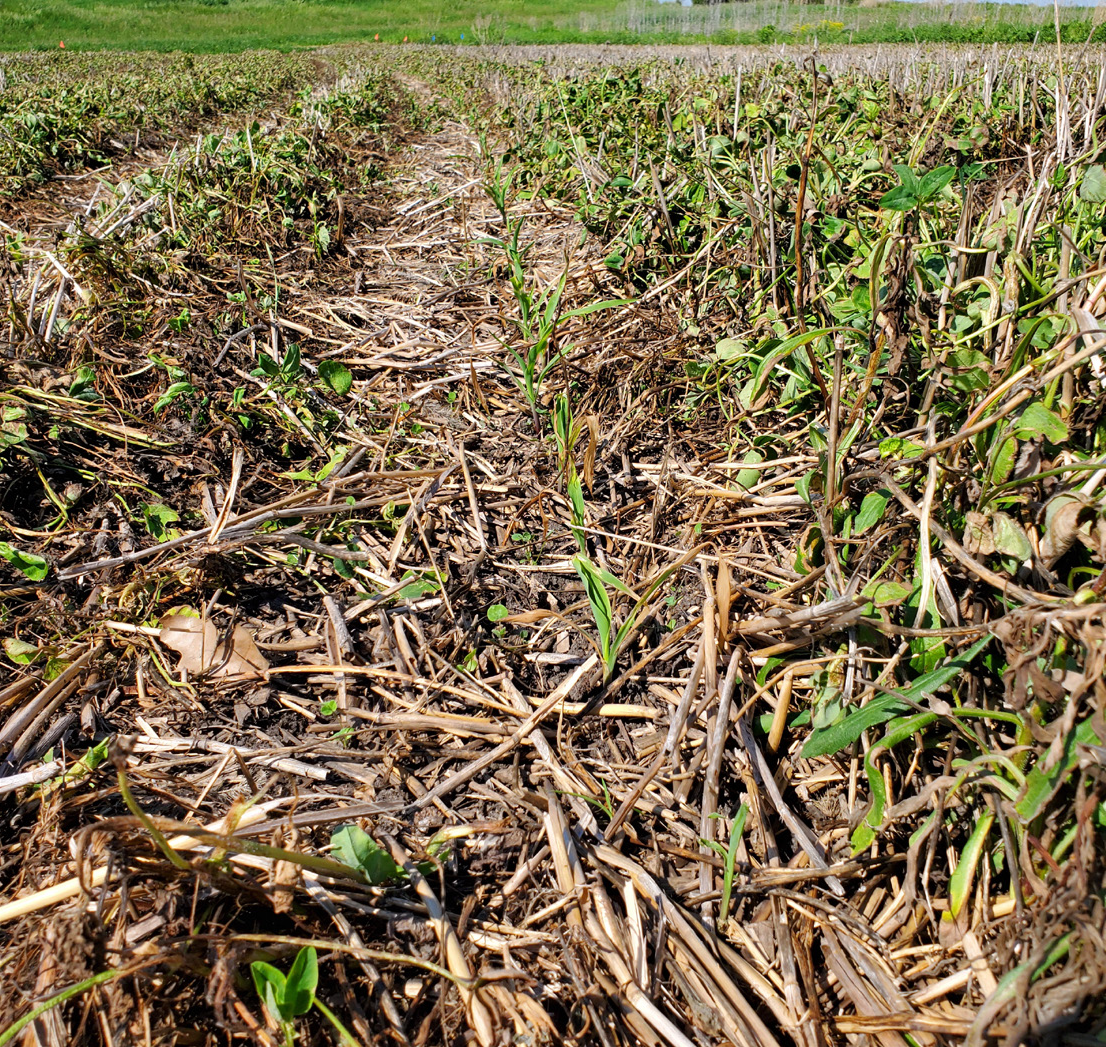 To evaluate the effect of cover crop termination on corn, we calculated the least significant difference (LSD) a t-test for the difference in average yield between their two treatments was greater than the LSD, we would expect such a difference to occur 9 times out of 10 – we refer to this as a statistically significant effect. On the other hand, if the difference resulting from the two treatments was less than the LSD, we would consider the results to be statistically similar. We could make these statistical calculations because both Boyer’s and Sloan’s experimental designs involved replication of their two treatments (Figure A1).

From samples he collected about one week after planting corn, Sloan determined that he planted corn into a clover stand of 4,118 lb/ac of biomass. In his Delayed Clover Termination strips, the clover was allowed to grow for an additional month before Sloan terminated on June 24 (Table 1).

At Sloan’s, neither cornstalk nitrate concentrations nor plant populations just prior to harvest were affected by the clover termination date treatments (Table 2). For both treatments, stalk nitrate concentrations fell in the low category (<250 ppm), but this does not necessarily indicate nitrogen deficiency, according to Iowa State University Extension and Outreach.[10] Rather, it could be an indication of the corn having just enough nitrogen through the season. 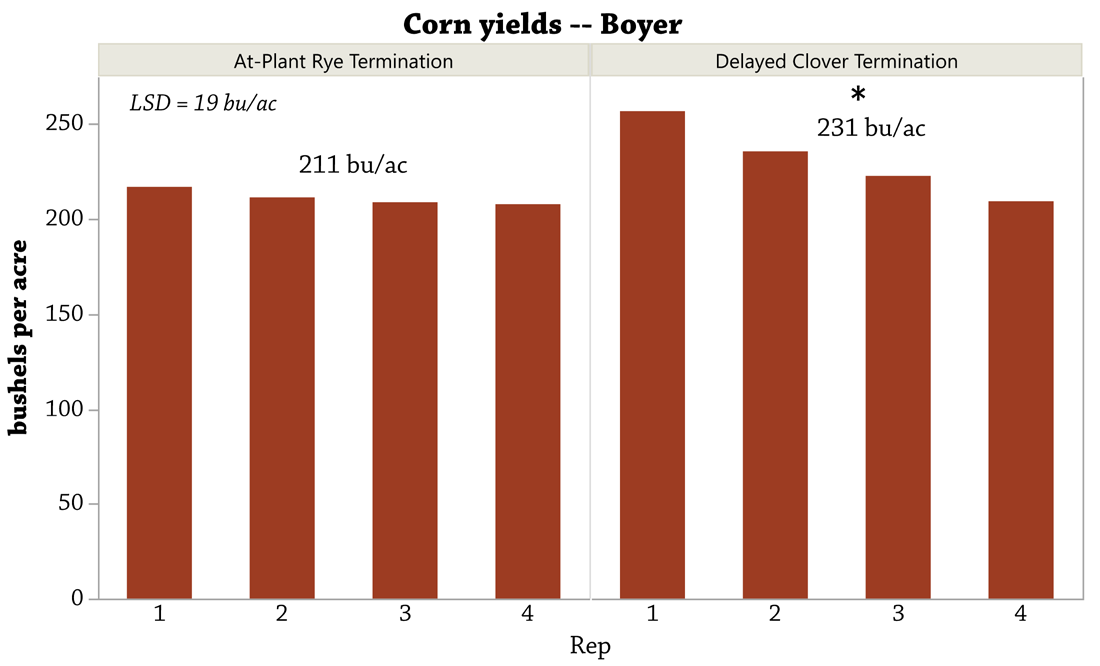 FIGURE 1. Corn yields at Jack Boyer’s in 2021. Because the treatment averages differed by more than the least significant difference (LSD = 19 bu/ac), we consider the treatments statistically different. The Delayed Clover Termination treatment was the statistically superior treatment as indicated with an asterisk (*). 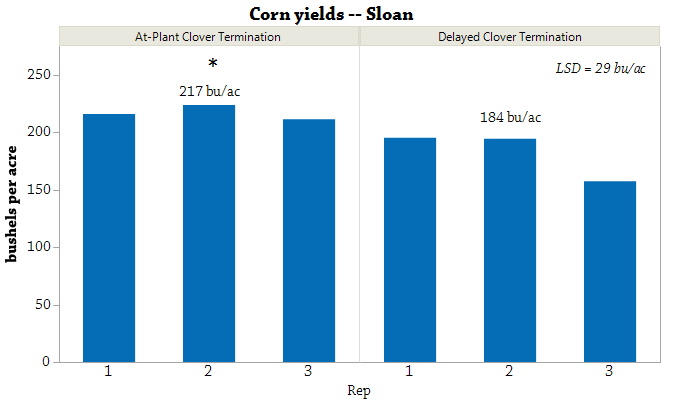 FIGURE 2. Corn yields at Dick Sloan’s in 2021. Because the treatment averages differed by more than the least significant difference (LSD = 29 bu/ac), we consider the treatments statistically different. The At-Plant Clover Termination treatment was the statistically superior treatment as indicated with an asterisk (*).

At Sloan’s field day on June 29, 2021, both Sloan and Boyer shared observations of moisture stress in the corn in their respective delayed termination treatments. Both Boyer’s and Sloan’s farms saw precipitation well below average in 2021 (Figure A2). Both moisture stress and competition from clover cover crops that were insufficiently terminated have been cited as culprits of corn yield drag in previous experiments in Ontario[11] and Iowa.[12] This may well have been why Sloan saw reduced corn yields where he delayed termination of the clover cover crop compared to both the at-plant termination and the 5-year average for Buchanan County (208 bu/ac), where Sloan farms.[13] It is probably worth mentioning, though, that Sloan achieved his corn yields with only the nitrogen applied with the starter fertilizer at planting and the 60 units side-dressed in June (Table 1). This speaks to the ability for clover cover crops to replace synthetic forms of nitrogen in corn production.

Despite low rainfall in June and July and delayed termination of clover, Boyer, observed no yield drag from delaying the termination of the clover; in fact, corn yields exceeded his county’s 5-year average by over 20 bu/ac (Grundy County = 207 bu/ac).[13] Rainfall in August was approximately twice the long-term average and that may have sufficiently improved soil moisture conditions (Figure A2). Additionally, nitrogen cycling from the decomposing red clover cover crop may have helped to boost yields compared to the rye cover crop terminated at corn planting.

We used partial budget analysis to compare economic outcomes of the two treatments at Boyer’s because of the disparity in costs of cover crop seed. Remember that the cereal rye in the At-Plant Rye Termination treatment at Boyer’s was a volunteer cover crop that was seeded from grain blown out the back of the combine during rye harvest in July 2020 (Table 1). The red clover seed in the Delayed Clover Termination treatment, however, was purchased and broadcast seeded in March 2020. Even when considering these costs, Boyer’s Delayed Clover Termination treatment bested the rye treatment by $87.84/ac (Table 3). The greater corn yields (by 20 bu/ac @ $5.50/ac) were enough to cover the cost of the red clover and then some.

From their results, both Boyer and Sloan expressed some hesitancy about adopting the practice of suppressing or delaying termination of a clover cover crop in corn. Boyer did see some promise to the practice, but came away from the experience wondering if it would be consistently feasible. Attempting to stunt the clover and create conditions where it would not interfere with the corn proved challenging. “I saw some opportunity for clover producing nitrogen, however, weed control became an issue,” he said. “The concept was good, but in practice, it was more difficult to implement successfully.”

Sloan echoed Boyer’s concerns about weed pressure when intending to let clover grow beneath the corn canopy. “A suppressed clover crop can compete with a newly planted corn crop. If weed control becomes critical to save the corn, I won’t gain any benefits later in the season and could further damage the corn in a dry year.” Instead, Sloan intends to keep using clover cover crops in his cropping system but will terminate it before planting corn because “clover after winter small grains improves my soil health and subsequent corn crops.” In a future trial, Sloan will compare a fall clover termination date with a spring termination date.

FIGURE A1. Sample experimental design used by the cooperators. The design involves replications of the two termination treatments and this allowed for statistical analysis of the results. 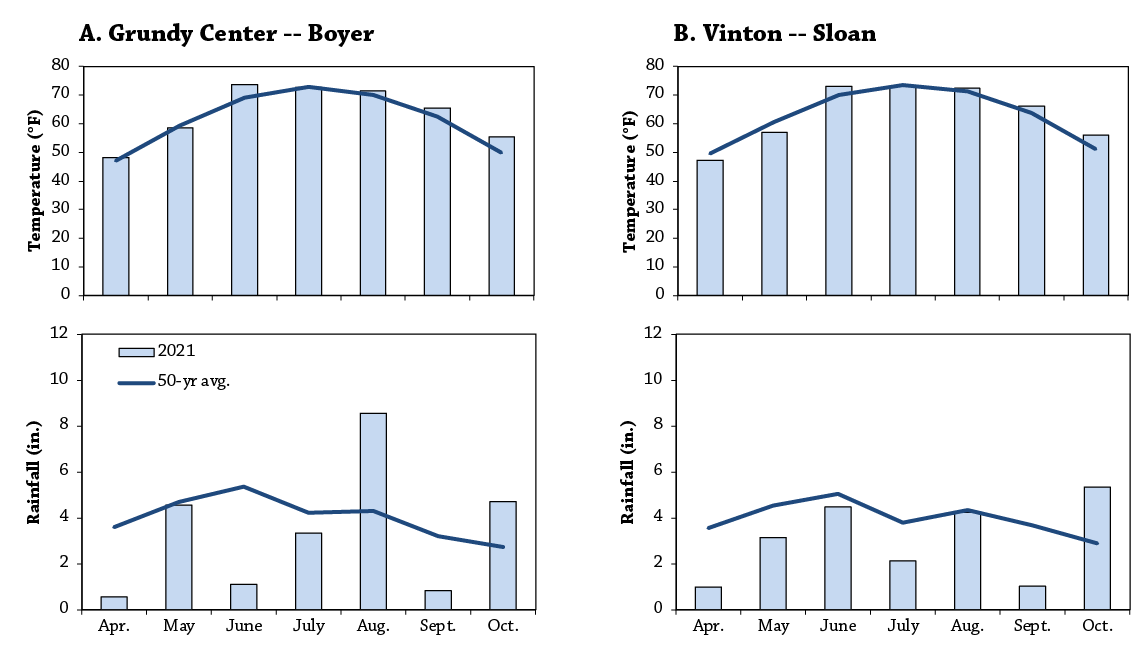 FIGURE A2. Mean monthly temperature and rainfall for 2021 and the long-term averages at the nearest weather stations to each farm. A) Boyer (Grundy Center); B) Sloan (Vinton).[15]