Neonicotinoids are a class of insecticide that causes paralysis and death of a broad range of insects by blocking receptors in their central nervous systems. When applied to soybeans in the form of a seed treatment, neonicotinoids enter seedling roots and are translocated to all parts of a growing plant.[1] Insect pests ingest the insecticide when feeding on any part of the plant, and protection lasts three to four weeks after planting.[1,2]

A growing body of scientific research has demonstrated that neonicotinoid seed treatments generally fail to significantly improve crop plant stands or yield.[1–4] PFI on-farm research conducted in 2014 and 2015 found no gains in soybean yield or profitability when using treated compared to untreated seed in 5 out of 5 trials.[4] 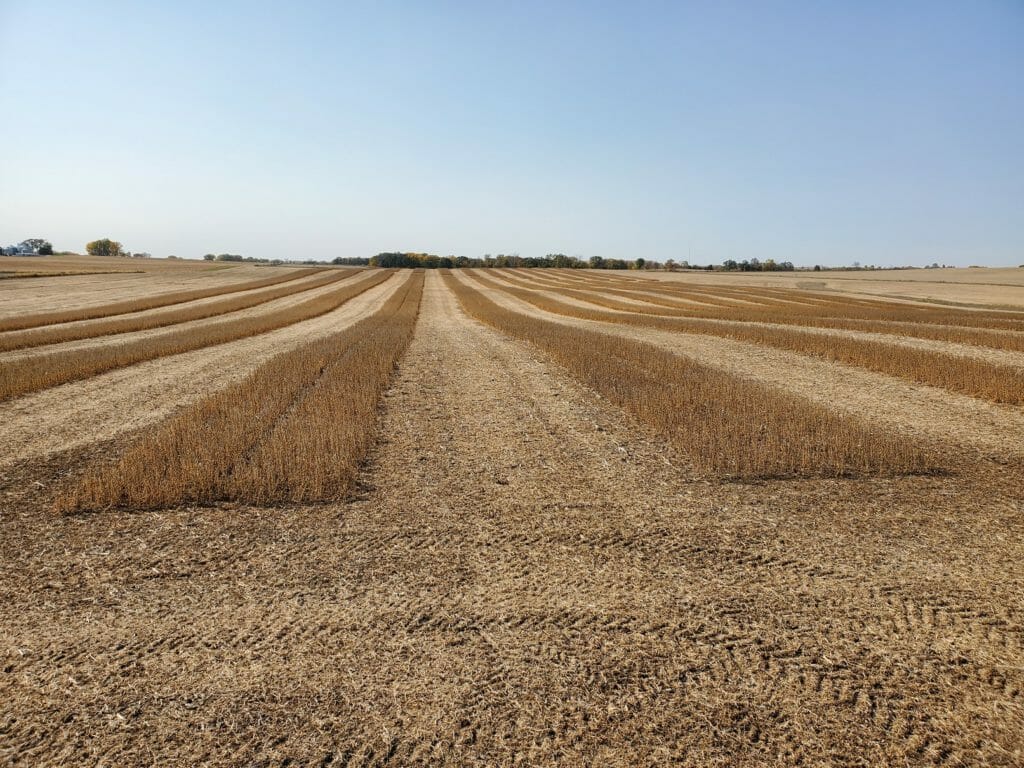 Harvest data were collected from only the middles of each strip. Photo taken Oct. 10, 2020.

Despite these findings, neonicotinoid seed treatments continue to be widely used as “insurance” and applied in a preventative manner, adding potentially unnecessary expense for growers and contributing to the widespread abundance of neonicotinoids in agricultural soils and non-target habitats.[2,3] In these environments, neonicotinoids work their way up the food chain, impacting beneficial insects, birds, rodents and deer, among a variety of other creatures.[5,6]

Dick Sloan questions the value of neonicotinoid seed treatments and is concerned about their social and environmental impacts. Sloan says, “Slugs can eat neonicotinoid-treated soybeans and just keep on slugging. But beneficial beetles that prey on slugs are sickened or killed by the insecticide the slugs have eaten, and this can lead to reduced plant populations.” For this trial, Sloan chose to compare soybean yield, soybean plant population and profitability of untreated soybean seed with soybean seeds treated with both neonicotinoids and fungicide.

Sloan established treatment strips on May 11 by drilling soybeans in 7.5-in. rows into the living cover crop. He drilled seed at a population of 136,000 seeds/ac in the treated strips and 140,700 seeds/ac in the untreated strips. The difference in seeding rates occurred because the seed treatment affected seed flow through Sloan’s drill. Treatments were arranged randomly in adjacent strips measuring 45 ft by 1,320 ft and were replicated 6 times for a total of 12 strips in each field (Figure A1).

Sloan conducted soybean stand counts in the small grain-clover/corn field on June 6 (26 days after planting [DAP]) and June 30 (50 DAP). In the continuous corn field, Sloan conducted stand counts on June 12 (32 DAP) and June 30 (50 DAP). The first stand counts were done by counting soybeans in 4 rows measuring 17 ft 5 in. long in every strip. The second stand count was done by counting soybeans inside a hula hoop that was randomly tossed in each strip. On Oct. 10, Sloan harvested soybeans from the middle 25 ft of each strip in both fields and reported yields for each individual strip. Yields were adjusted to standard moisture.

To evaluate effects of the seed treatment on soybean yield and stand count, we calculated treatment averages for each measurement then used t-tests to compute least significant differences (LSDs) at the 95% confidence level. The difference between each treatment’s average soybean yield or stand count is compared with the LSD. A difference greater than or equal to the LSD indicates the presence of a statistically significant treatment effect, meaning one treatment outperformed the other and Sloan can expect the same results to occur 95 out of 100 times under the same conditions. A difference smaller than the LSD indicates the difference is not statistically significant and the treatment had no effect.

In both fields, soybean yields were statistically similar between treatments (Figure 1). Similar to the interpretation of plant populations, the higher seeding rate of untreated seed relative to treated seed may have led to greater yields than would otherwise have occurred had both treatments been seeded at the same rate.

FIGURE 1. Soybean yields in both fields at Dick Sloan’s. A) continuous corn, B) small grains-clover/corn. Columns represent yields for each individual strip. The average yield is indicated above each group of columns. Because the difference between averages in each field is less than the least significant difference (LSD), the treatment yields are considered statistically similar at the 95% confidence level.

Sloan was able to confirm his hypothesis that soybean seed treated with neonicotinoids and fungicide provides no benefit to the return on investments in comparison with untreated seed on his farm. These findings are true for both fields in which Sloan conducted this experiment. Furthermore, Sloan’s findings align with previous trials conducted by himself and other PFI farmer-cooperators as well as with a growing body of scientific literature[1–4]. In Sloan’s own words: “This project confirms my earlier results that soybean seed treatments are not justified in my production system. I will continue to plant untreated soybean seed, avoiding the additional expense and risks of treated seeds.”

FIGURE A1. Dick Sloan’s experimental design consists of six replications of both treatments. Th is design allows for statistical analysis of the data.

FIGURE A2. Mean monthly temperature and rainfall during the trial period and the long-term averages at Independence the nearest weather station to Sloan’s farm (about 7 miles away)[7].