Cabbage is a crop that thrives when grown in the fall in Iowa. Coleslaw, however, is most popular in the hot, humid summer, and requires cabbage grown earlier in the year to be ready for harvest by July. While cabbage is not a summer crop, heat-tolerant varieties have been developed and released for summer growing. In 2019 Emily Fagan, Kate Edwards, Carmen and Maja Black performed a cabbage variety trial to test heat-tolerant varieties of cabbage from the East Coast[1]. They found that Farao performed best against the three other varieties (Primo Vantage, Caraflex, and Capture), and were curious about testing Farao against other, new cabbage varieties, including two red cabbages. 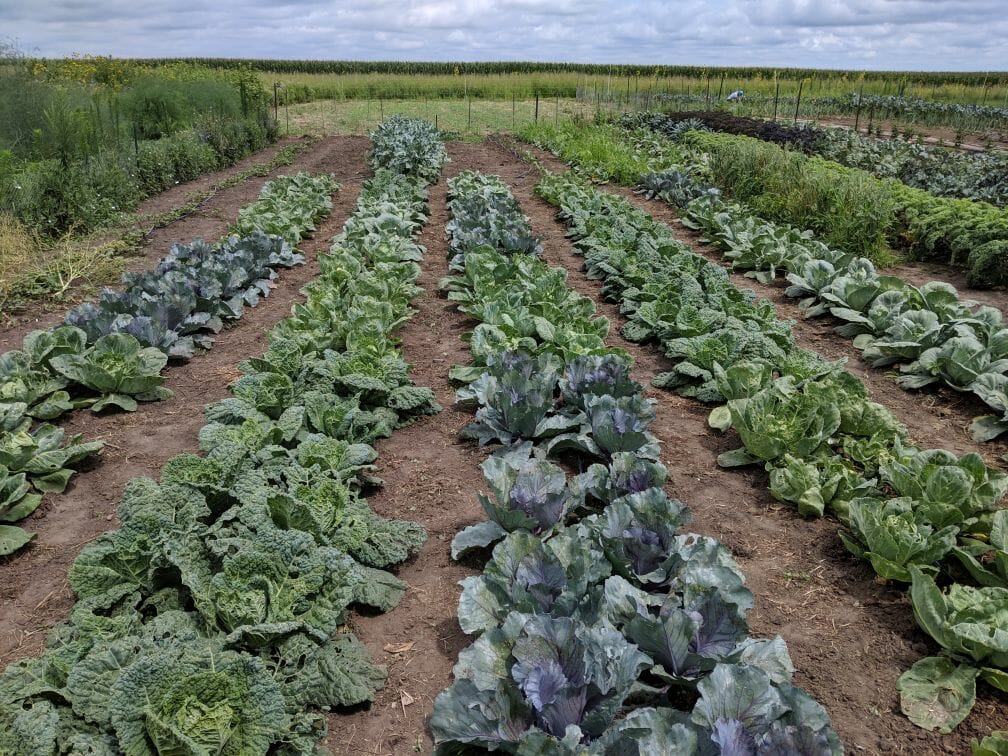 Alice McGary looks over her rows of cabbage.

Cooperators were very motivated to continue growing and incorporating summer cabbage into their growing seasons. Kate Edwards looked forward to testing the newer varieties while collaborating with other cooperators and improving her research skills. “I feel if I can improve my ability to do trials, that will help our farm answer questions for years to come,” Edwards said. Hannah Breckbill and Emily Fagan were motivated by last year’s trial and the ever-present demand for coleslaw. “It will help us be more successful with summer cabbage, make all our work worth it, and keep our customers happy,” Fagan said.

Each farm set up a randomized, replicated trial with four replications of each variety. Cooperators planted at least ten plants per plot, and tested up to six cabbage varieties: Farao, Red Express, Tiara, Charmant, Red Jewel, and Famosa. The replications allowed for statistical analysis of the results (Figure A1).

In late March through early May, cooperators seeded their cabbage varieties in the greenhouse. Then, around a month after seeding, cooperators transplanted the cabbage into their fields in the design format from Figure A1. In late July through mid-September, or when the cabbage was deemed mature, cooperators harvested and measured it. Management information can be found in Table 1. 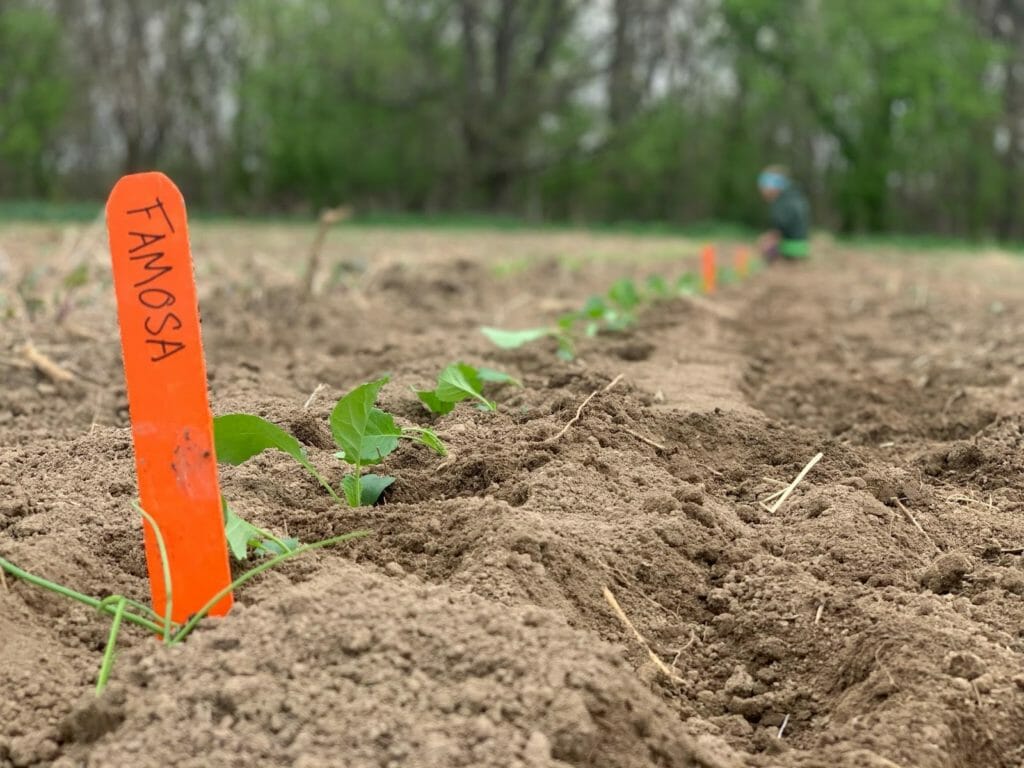 Carmen & Maja Black transplant their cabbage into the field.

Cooperators collected yield data by plot: head weight and total plot weight per plot. They also scored each plot for quality issues, specifically head splitting, black rot and cabbage worms. Presence of these issues was scored per plot as “none,” “some,” or “much.” To create average scoring for quality, numerical values were later substituted as such: “none” = 0, “some” = 1 and “much” = 2. Therefore, a score of 0 indicates no presence of the indicated quality issue and scores closer to zero indicated better cabbage quality. These quality scores were not statistically analyzed. 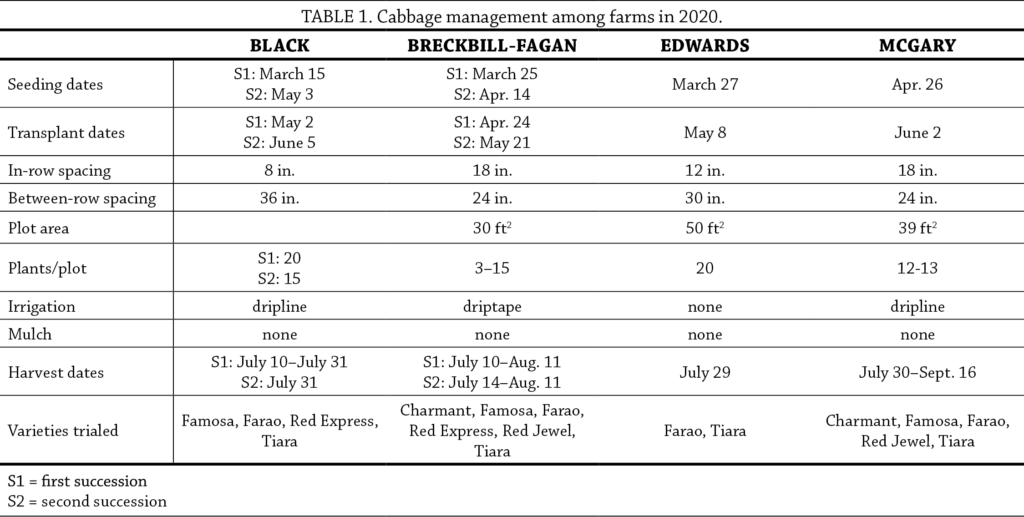 To determine the effect of variety on cabbage yield, we calculated Tukey’s least significant difference (LSD). If the difference in yield for any two varieties was greater than or equal to the LSD, we confirm that variety had a statistically significant effect on yield. On the other hand, if the difference in yield was less than the LSD, we consider the varieties to be statistically similar. We used a 90% confidence level to calculate the LSDs, which means that we would expect our rankings to occur nine times out of 10. We could make these statistical calculations because the farmers’ experimental designs involved replication and randomization of their treatments (Figure A1).

At Breckbill and Fagan’s farm, there was no significant difference in harvest rate among the six varieties, with Succession 2 seeing a higher harvest rate generally (Figure 1A). Head weight varied by succession: Farao performed significantly best in S1, and Tiara in S2. In both successions, Red Jewel performed significantly worse than the other varieties, and Red Express also performed poorly in S2 (Figure 1B). Given that Farao produced one of the highest head weights in both successions, this confirms its consistent high production on Breckbill and Fagan’s farm. 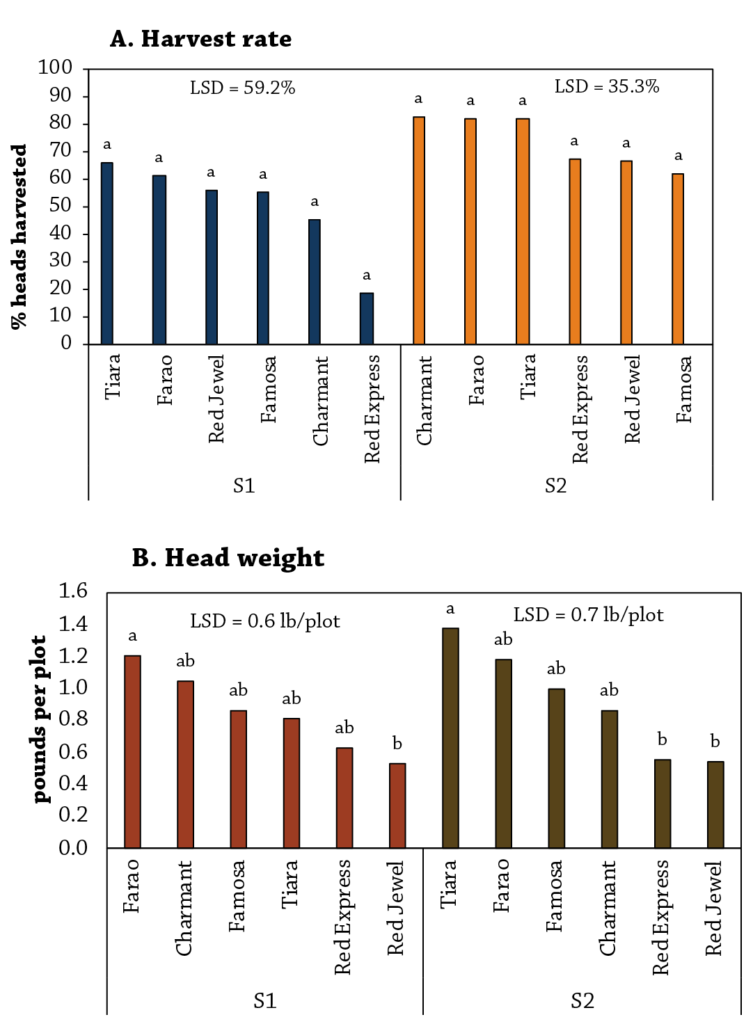 FIGURE 1. Cabbage yield at Hannah Breckbill & Emily Fagan’s farm in 2020. Varieties are listed according to their performance in each succession, with each column representing the succession mean. Results that differ by the least significant difference (LSD) are followed by different letter-ranking and are considered statistically different with 90% certainty. 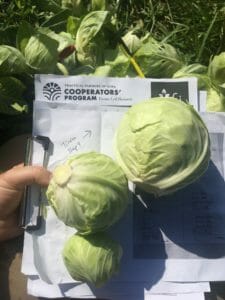 Kate Edwards measures a replication of Tiara cabbage at harvest.

Across the successions, there was very little issue with splitting and relatively minor amounts of black rot, a positive sign about hardiness across varieties (Table 2). In S1, Farao had slightly worse issues with quality than the other varieties, and in S2 Tiara had very slightly worse issues. Red Express had fewer issues across both successions.

Edwards grew the Farao and Tiara varieties of cabbage only, and they performed similar to one another. There was no significant difference in harvest rate, which were both high (Figure 2A). No significant difference was observed for head weight (Figure 2B) or plot weight (Figure 2C). These results are encouraging for the Tiara variety, which has as consistent production as, if not insignificantly better than, Farao.

FIGURE 2. Cabbage yield at Kate Edward’s farm in 2020. Because results did not differ by more the least significant difference (LSD) they are considered statistically similar with 90% certainty. We indicate these similarities with the same letter-rankings above the columns.

Similar to Breckbill and Fagan’s farm, splitting was not an issue with Farao or Tiara at Edwards’ (Table 3). Farao had slightly better quality than Tiara for black rot and cabbage worms. The general lack of splitting and black rot is positive, and means both varieties have good hardiness. 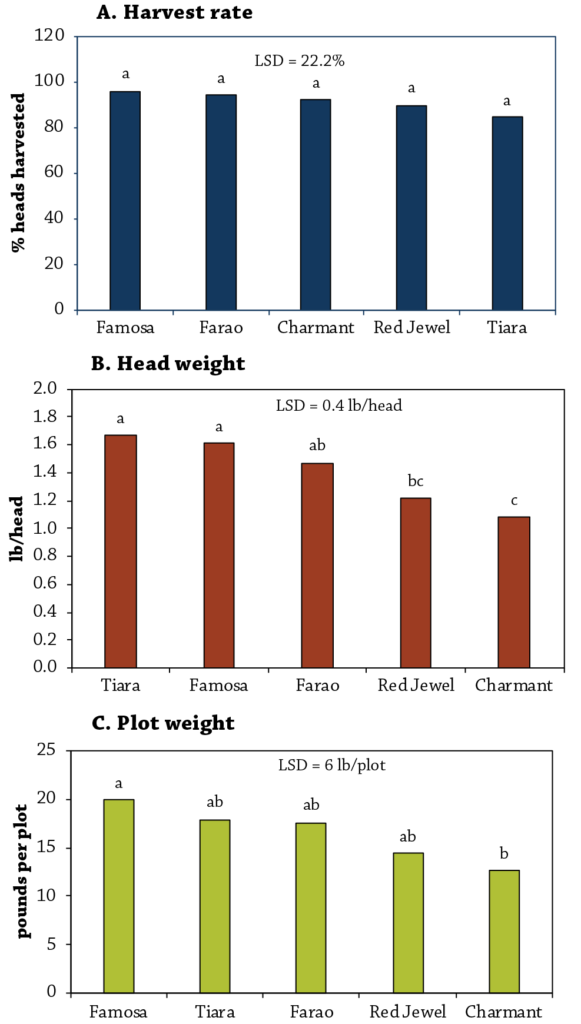 FIGURE 3. Cabbage yield at Alice McGary’s farm in 2020. Varieties are listed according to their performance with each column representing the succession mean. Results that differ by the least significant difference (LSD) are followed by different letter-ranking and are considered statistically different with 90% certainty. 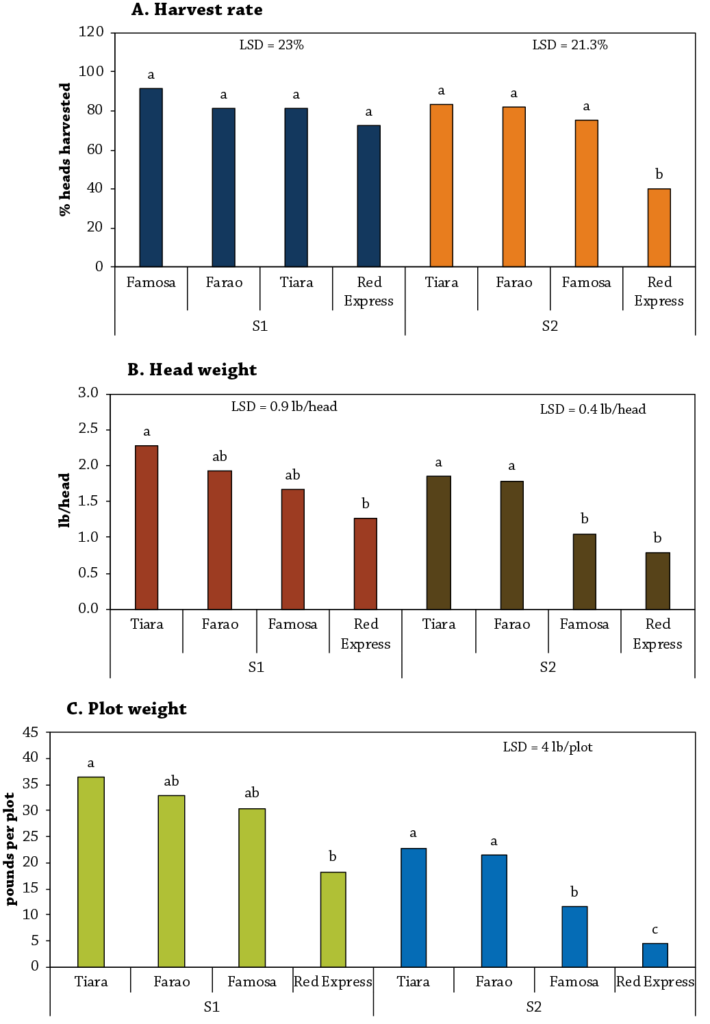 FIGURE 4. Cabbage yield at Carmen & Maja Black’s farm in 2020. Varieties are listed according to their performance in each succession, with each column representing the succession mean. Results that differ by the least significant difference (LSD) are followed by different letter-ranking and are considered statistically different with 90% certainty.

Carmen and Maja Black recorded the number of cabbage with quality issues per plot (instead of using a 0-2 range quality range like the other farms). They found no quality issues at all in S2, and no cabbages with worms in either succession. Only one Tiara cabbage had splitting issues. Black rot was more prevalent, and three Red Express had instances of it (Table 5). Famosa was the leading cabbage for quality. 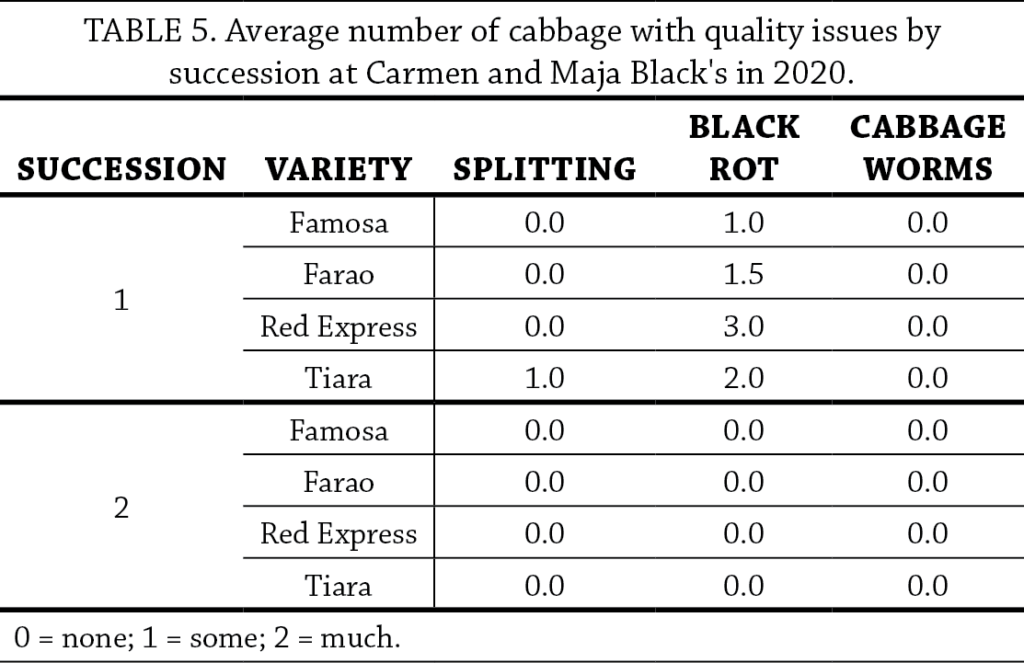 Cooperators expected Farao to be a top producer and provide better quality. This turned out to be true at each of the four farms with Tiara consistently scoring among the best as well.

For Emily Fagan, this trial taught her which varieties to plant and which to avoid. “[It] will save me from trying to grow unproductive varieties in the summer,” Fagan said. Kate Edwards noted that while factors outside of her control were challenging, the trial was still valuable.

Cooperators want to continue the Cabbage Variety Trial for a third year this growing season. Edwards plans to compare her year 1 and year 2 varieties for a final verdict. “I also plan to stagger the seeding date in the greenhouse a little and plant our plants when they are ready instead of waiting to get a better distance between trial successions,” Edwards said. Hannah Breckbill and Emily Fagan also wish to participate in the trials third year, but have learned that red cabbage does not grow as well for them. “I think we’ll stop trying red cabbage in the summer, and will add a new variety of green cabbage to our summer plantings,” Fagan said. 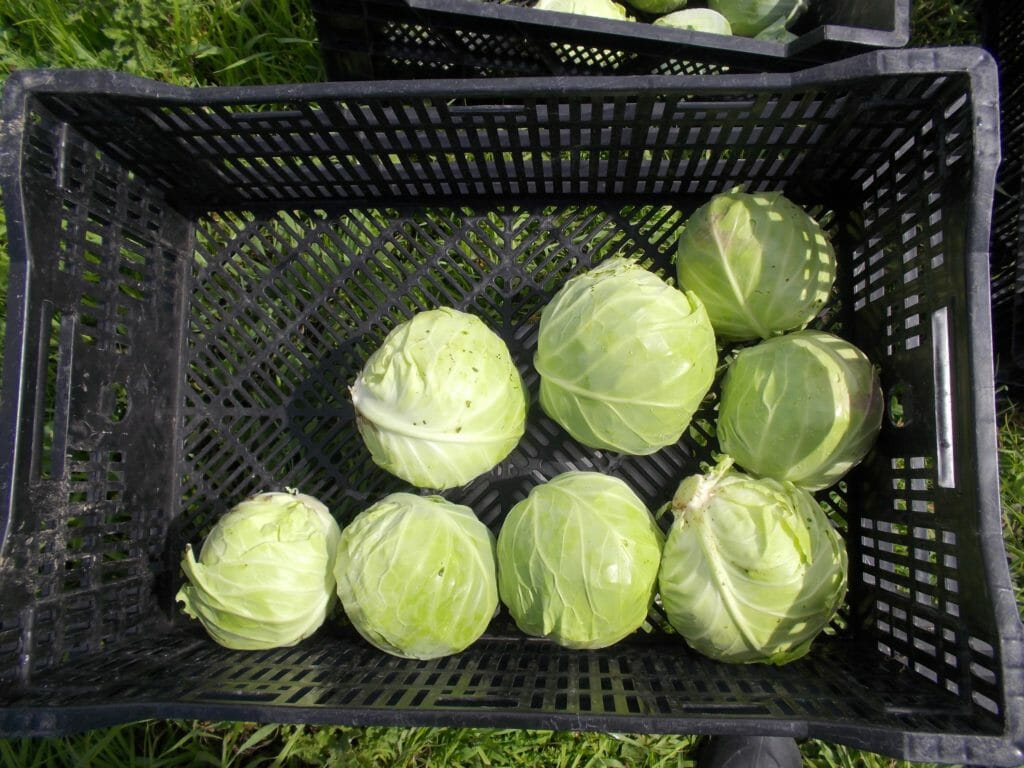 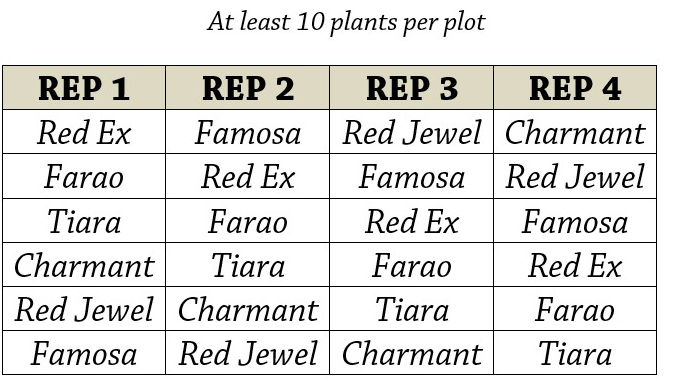 FIGURE A1. Example of experimental design used by all farmers in the trial, which included randomized replications of the varieties. This design allowed for statistical analysis of the results.

FIGURE A2. Mean monthly temperature and rainfall for April through September and the long-term averages at the nearest weather stations to each farm. A) Black & Edwards B) Breckbill & Fagan C) McGary[2]