The use of rotary hoes, harrows and tine weeders for weed management in small-grains crops (like oats) has been studied across the world.[1–3] This trial was originally designed with a tine weeder because of their increasing popularity among organic farmers who have reported aggressive action and good weed seedling disruption in soybeans. When Alert attempted the first pass with the tine weeder in late April, however, it resulted in too much plugging due to the soybean residue remaining after one preplant tillage pass (see photo). They switched to a rotary hoe which better accommodated the soybean residue.

At left, Alert ﬁrst attempted to use a tine weeder through emerged oats on Apr. 26, 2020 but it resulted in too much plugging. At right, rotary-hoe pass on Apr. 26 that better accommodated the leftover soybean residue from 2019.

To test the effect of rotary hoeing on oats, Alert and Smith compared two treatments:

Alert and Smith harvested and recorded oat yields and grain moisture from each strip on Aug. 8. “The oats were quite clean so we were able to direct-cut the oats rather than swath and pick up.” Alert said. Oat grain yields were corrected to 13% moisture.

Rotary hoeing oats had no significant effect on oat yield (Figure 1), though it did delay heading by about four days. These results mirror those from on-farm research conducted by Darren Fehr and Dan Wilson with the Iowa Organic Association in 2016.[3] Both farmers saw no difference in oat yields compared to where they did not hoe the oats. In the present trial, Alert and Smith’s average oat yield was 134 bu/ac across the two treatments. That is nearly double the 75 bu/ac average yield for Iowa’s north-central agricultural district in which Alert and Smith farm, for the period 2015–2019.[4] 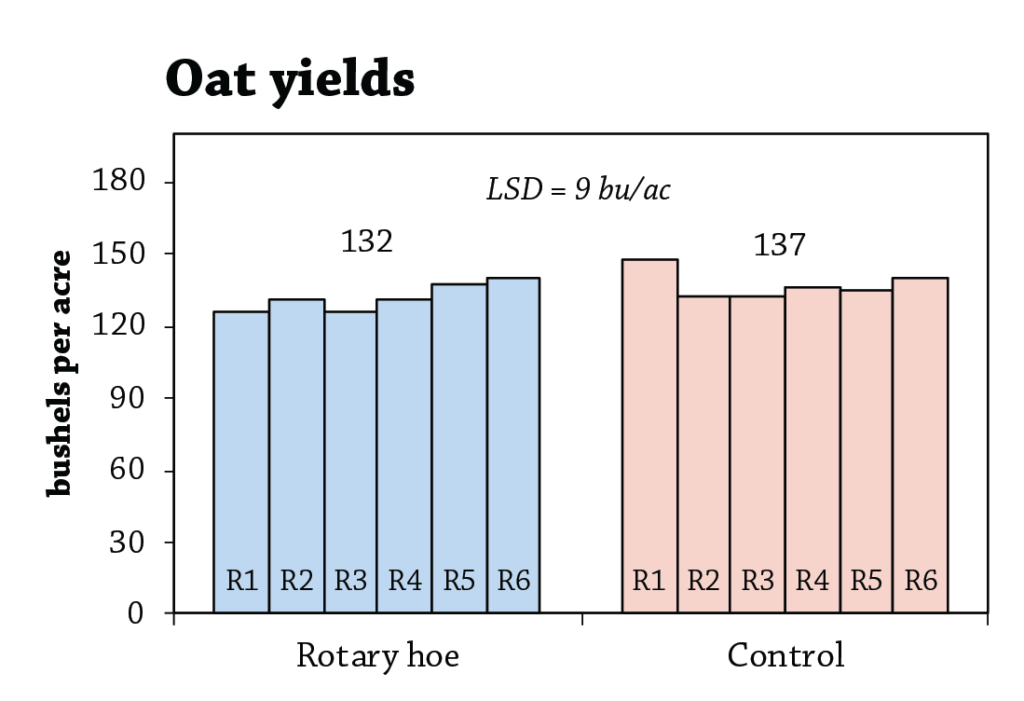 FIGURE 1. Oat yields at Doug Alert and Margaret Smith’s, harvested on Aug. 8, 2020. Columns represent yields for each individual strip. Above each set of columns is the mean for both treatments. Because the observed difference between the two means (5 bu/ac) is less than the least significant difference (LSD; 9 bu/ac), the results are considered statistically similar at the 95% confidence level.

The rotary hoe treatment involved three extra passes through the field compared to the control treatment: two rotary hoe passes (Apr. 26 and May 4) and a broadcast-seeding pass for the red clover (May 4) (Table 1). We assigned costs to the rotary hoe passes ($10.35/ac × 2) and broadcast-seeding pass ($12.10/ac) based on ISU Extension and Outreach survey data for 2020.[5] Ultimately, the rotary hoe treatment cost $32.80/ac more than the control treatment with no improvement in oat yield (Figure 1) nor any reduction in observed weed pressure, according to Alert. He also noted much better red clover establishment with their typical practice of drilling the clover at the same time as the oats (see photos). 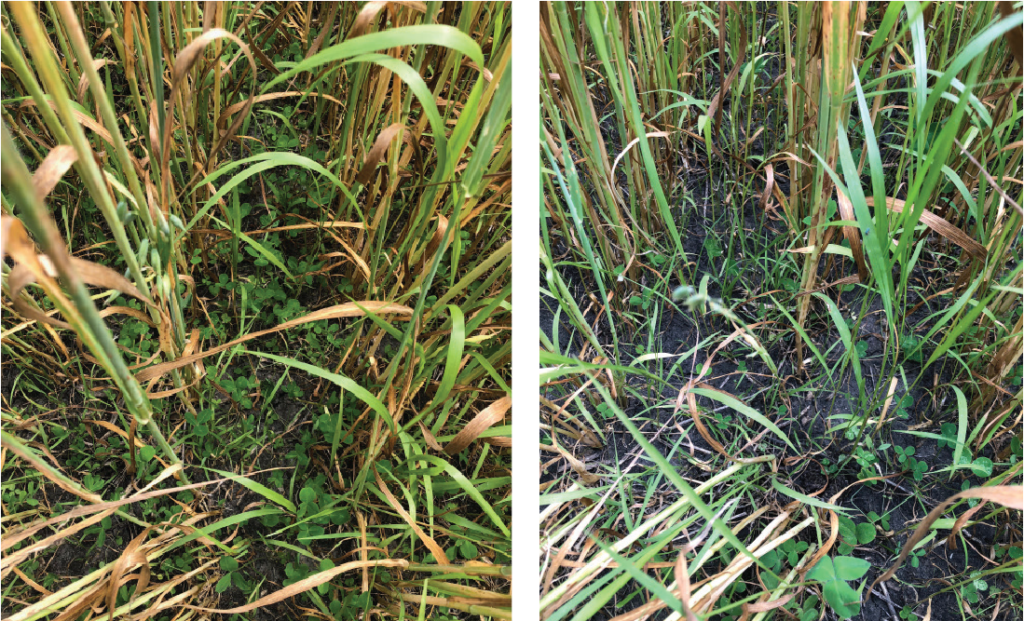 Because rotary hoeing had no effect on oat yields compared to the control, the practice is considered an added expense to Alert and Smith’s crop production. “Probably not a practice I’ll do again,” Alert said. “It’s more passes and delays clover planting and from experience it works really well to co-seed oats and clover. Though we usually get enough rain to germinate red cover dropped on the soil surface in late April or early May, this really is a riskier option than getting that seed underground with the drill a month earlier.” Smith added: “Our impression is that tine weeding is really only applicable where fields have been clean tilled, with very little or no residue. Rotary hoeing may be an option where weed pressure is very high and/or when a post seeding is planned following oat harvest.” Striving for early oat planting, though, will likely have as much or greater effect on weed suppression than mechanical interventions.

FIGURE A2. Mean monthly temperature and rainfall for Apr. 1, 2020 through July 31, 2020 and the long-term averages at the nearby Hampton weather station.[6]