Growing tomatoes in the high tunnel gives farmers an early jump on the tomato market, and can help protect the plants from some environmental stressors. Typically, farmers choose hybrid tomato varieties in the high tunnel (rather than open-pollinated or “heirloom” varieties) for the hybrids’ bred resistance to disease. This is the third year in a row of high tunnel tomato variety trials, but the first year to include both hybrid and heirloom varieties. Rob Faux of Genuine Faux Farm in Tripoli, said, “We would like to optimize our high tunnel tomato production, but we are committed to growing heirloom varieties on our farm. If we can better assess how well these varieties produce in the high tunnel, we can determine appropriate prices and determine whether we should investigate other varieties.”

This project was conducted by farmers at two Iowa farms: Rob Faux (Genuine Faux Farm) in Tripoli and Lee Matteson and Rose Schick (Lee’s Greens) in Nevada. The farmers planted three or four replications of their preferred tomato varieties in randomized, replicated trials. Faux trialed the varieties Black Krim and Italian Heirloom, while Matteson/Schick collected their second year of data comparing Big Beef and Bigdena. Varieties were selected based on farmer preference. Seeds for this trial were from Johnny’s Seeds and Seed Savers Exchange. Catalog descriptions of the varieties are in Table 1. 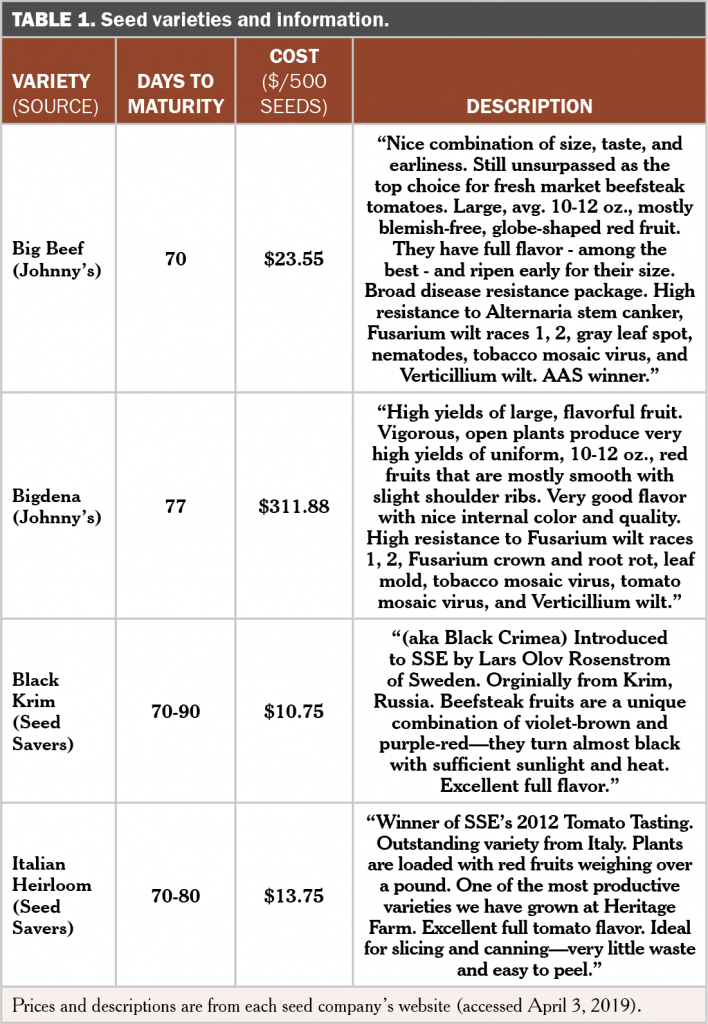 Production practices including mulching, spacing, irrigation, planting dates and harvest dates were determined by farm and are detailed in Table 2. The number of plants per plot ranged from 16 to 20, and both farms used 24 in. by 24 in. spacing between plants. Both farms grew their own transplants, and transplanted in-ground in high tunnels; the high tunnel at Matteson/Schick was heated for early-season production.

Farmers harvested fruit as it was mature and needed for market, counting number of fruits and weighing fruit by plot during each harvest. Data were analyzed using JMP Pro 13 (SAS Institute Inc., Cary, NC) statistical software. For Matteson/Schick, a repeated measures approach was used to examine the effects of harvest date, treatment, and their interaction on cumulative tomato yield. Due to irregular harvest dates among plots at Faux, repeated measures could not be employed. Instead, means separation among varieties was computed using Tukey’s least significant difference (LSD) to examine effects of variety on end-of-year tomato yield. Statistical significance is reported at the 90% confidence level.

Figure 1 shows cumulative yields through the season at Matteson/Schick’s. Bold lines represent the varietal average and lighter lines show the individual plot yields. A repeated measures analysis showed that for the period of June 6 – July 9, Big Beef produced more pounds of fruit than Bigdena, but by the end of the season the production was not statistically different, with Big Beef producing and end-of-season average of 15.7 lb/plant compared to Bigdena’s 16.0 lb/plant.

Figure 2. Mean fruit size of successive harvests shown in lb/fruit at Matteson/Schick’s. Bold lines are the average values for each variety; light lines are individual plot values. A comparison of linear models showed that Big Beef’s fruit size declined at a faster rate over the harvest season than did fruit size of Bigdena.

Matteson and Schick were interested in tracking fruit size over the season, as fruit size does matter to customers at farmers market, and they felt that Bigdena held its size better thoughout the season, while Big Beef produced larger fruit early, and smaller fruit later in the season. This was supported by the data, which is displayed in Figure 2. Fruits from both varieties were smaller at the end of the season than at the beginning, but Big Beef started larger (average of 0.74 lb/fruit compared to 0.69 lb/fruit for Bigdena) and ended smaller (0.37 lb/fruit for Big Beef compared to 0.43 lb/fruit for Bigdena). The linear model for Big Beef showed that fruit size declined at a statistically faster rate (-0.096 oz/day) than the linear model for Bigdena (-0.064 oz/day). Bigdena held its fruit size throughout the season better than Big Beef. End-of-season total yield values for Big Beef and Bigdena are provided in Table 3.

Due to irregular harvest dates among plots at Faux’s, only end-of-season values for yield characteristics are compared. Statistically, there were no significant differences in tomato yield (lb/plant or fruit/plant) or size of tomato (lb/fruit).

Enterprise budgets were not done for this project, but a back-of-the-envelope calculation provides some insight into the effect of seed cost on overall revenue. If all seeds purchased are successfully planted, the cost per seed (and thus, per plant) ranges from $0.02 for Black Krim to $0.62 for Bigdena. Table 5 shows the estimated revenue per plant, less seed cost, using the varietal yield at each farm.

All of these are quality seeds, but Bigdena is a more expensive F1 hybrid. Though Bigdena has a higher price tag, Matteson/Schick achieved high enough yields such that seed cost equaled 1% of revenue; a small factor in production costs. However, if Bigdena seeds went unused or transplants failed, the seed cost would quickly diminish profitability. 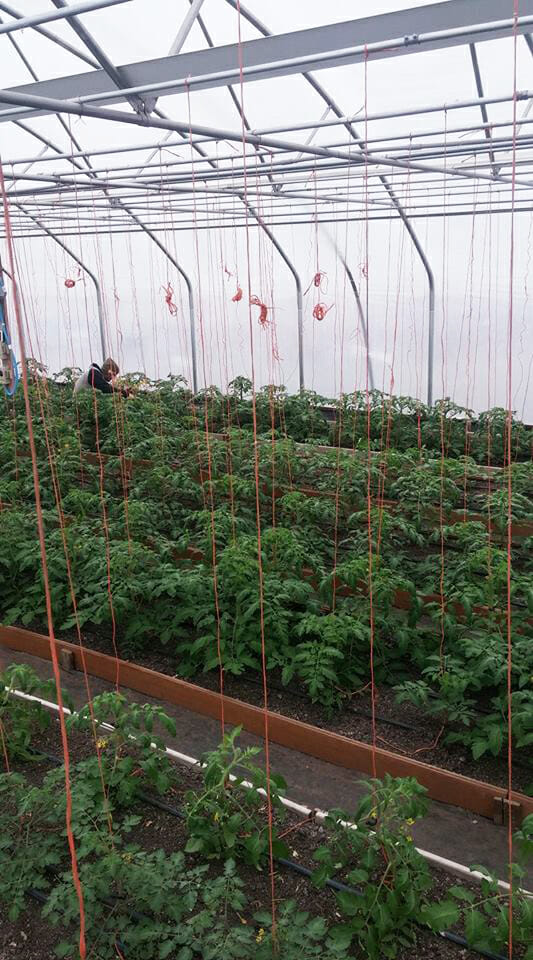 Tomatoes in the heated high tunnel at Matteson/Schick’s on April 3.

Matteson/Schick and Faux each compared two tomato varieties in randomized, replicated trials their high tunnels. Matteson/Schick, in a heated high tunnel, compared Big Beef and Bigdena (hybrids), while Faux compared Black Krim and Italian Heirloom (open-pollinated heirlooms). At Matteson/Schick’s, Big Beef had statistically higher yield until July 9, at which point cumulative yield from Bigdena caught up, and yields between the two varieties were not statistically different. Bigdena’s fruit, however, held its size better throughout the season, while Big Beef produced larger tomatoes early and smaller fruits at the end of the season. At Faux, end-of-season yields were not statistically different between the two varieties, and the varieties both had an average fruit size of 0.62 lb/fruit.

Schick and Matteson want tomatoes ready early in the season, and Big Beef is an early starter. However, the combination with Bigdena has advantages, too. “Big Beef has better name recognition at the farmers market, and its harvest started sooner. But it seems to do the traditional bell curve for harvest with tomato size declining as the season goes along which decreases the amount that can be sold to restaurant customers and more have to go to seconds,” said Schick. She continued, “It seemed to us that Bigdena has two flushes. Its harvest starts later than Big Beef, has a flush (in July), then has another one later (in late August).”

Faux noted that “if you can only pick one heirloom tomato variety, it should be Italian Heirloom.” In past years, Faux’s farm records indicate that fruit size of Italian heirloom was typically 0.75 lb/fruit, and that he typically expects 20 fruit/plant. In comparison to his expectations, 2018 was a mediocre tomato season. Faux also notes that the plants themselves are on the small-side and a “bit wispy”, but the production from them is excellent. The only issue he has with Italian Heirloom is occasional sunscald because there is less leaf cover.

Faux prefers Black Krim for a gourmet tomato. Also a smaller plant, he notes that they like warmer and drier weather; the opposite of the 2018 growing season. He also noted that because they are a black variety (rose-colored with greening/blackish shoulders), deciding when they are ripe is more difficult.