This research was funded by McDonald’s and USDA – Natural Resource Conservation Service.

The state of Iowa used to be the number one oat producing state, with over 6 million acres of oats grown in 1950.[1] In 2020, 73,000 acres of oats were grown in Iowa.[2] Oats grow well in Iowa and have multiple purposes; to sell as grain or feed or grown as seed for cover crops. Oats and small grain production in general can result in farmers controlling input costs because they facilitate the use of legume cover crops as a source of soil fertility and replacement for N fertilizer. A diversity of crops also offers farmers biological risk management in the form of breaking pest and weed cycles from the extended rotation. Livestock feed is a primary driver of what is grown in the Midwest, and incorporating oats into livestock rations would help diversify the landscape with a third crop, while providing soil health and water quality benefits.

Bill Couser owns and operates Couser Cattle Company in Nevada, Iowa, finishing 10,000 cattle and growing 5,000 acres of corn and soybeans annually. Couser explained, “We grew oats when I was a kid 50 years ago, but we fed those to our tractors, which were our horses. Since actual tractors came along, we’ve lost that market for oats. When I look at soil health and water quality, oats seem to be a natural fit, and I want to see what we can do for our land.” 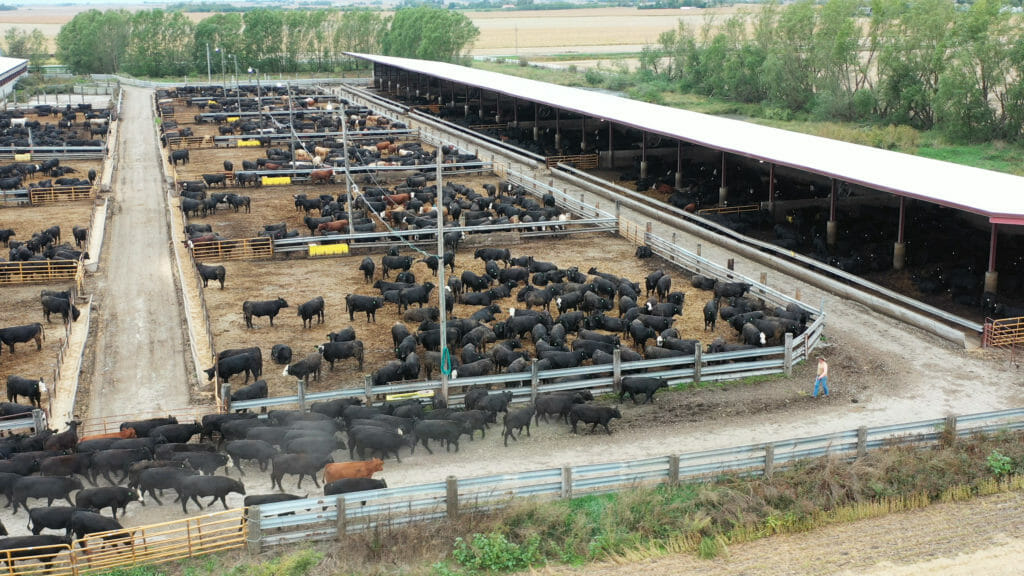 Couser fed cattle two different rations for 205 days or 230 days depending on the ration fed, and monitored animal performance in each treatment (Tables 1 and 2). Rations were formulated by Erik Loe, nutritionist with Midwest PMS, LLC. Ration, feedstuff, and fecal samples were obtained by Loe and anlayzed at Servi-Tech Laboratories in Hastings, NE. The intake and cattle weight data were collected by the feedlot manager and sent to Garland Dahlke at Iowa State University for compilation and analysis. 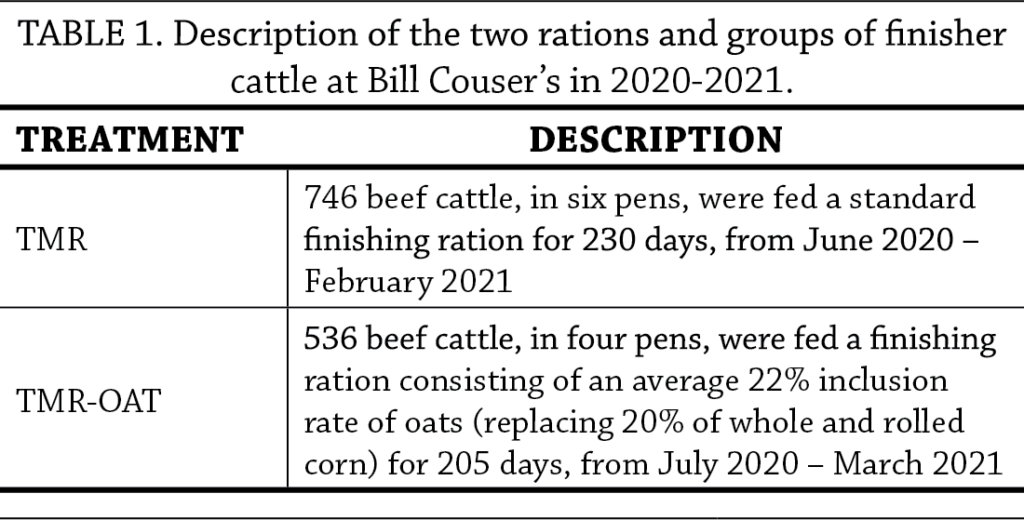 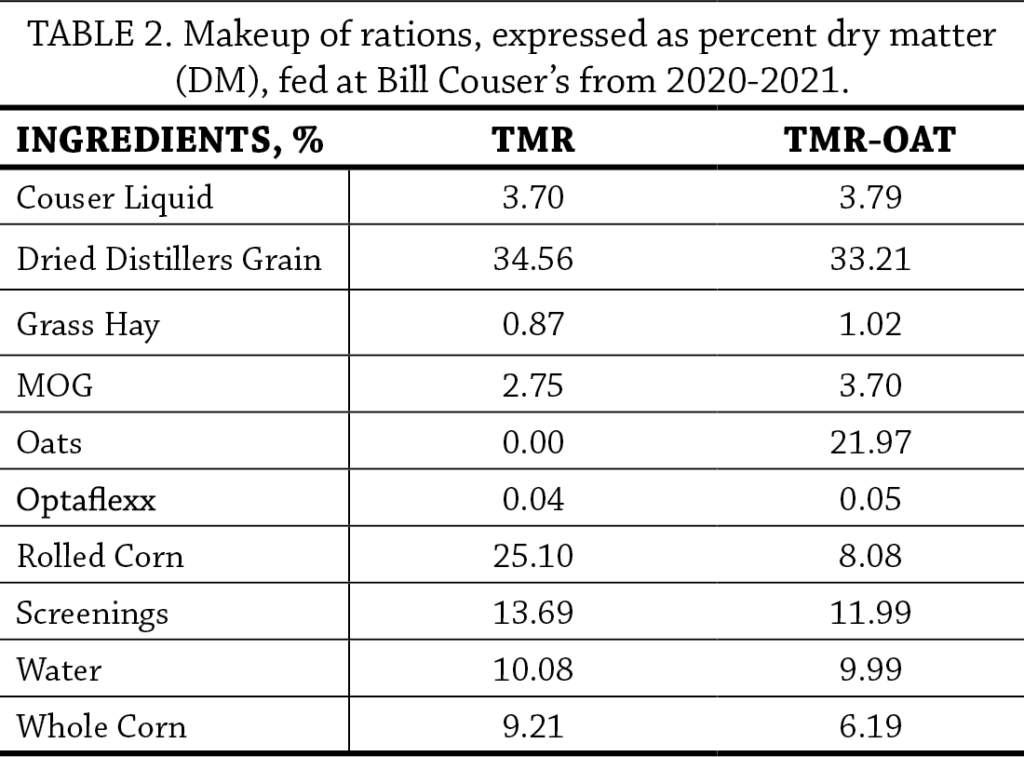 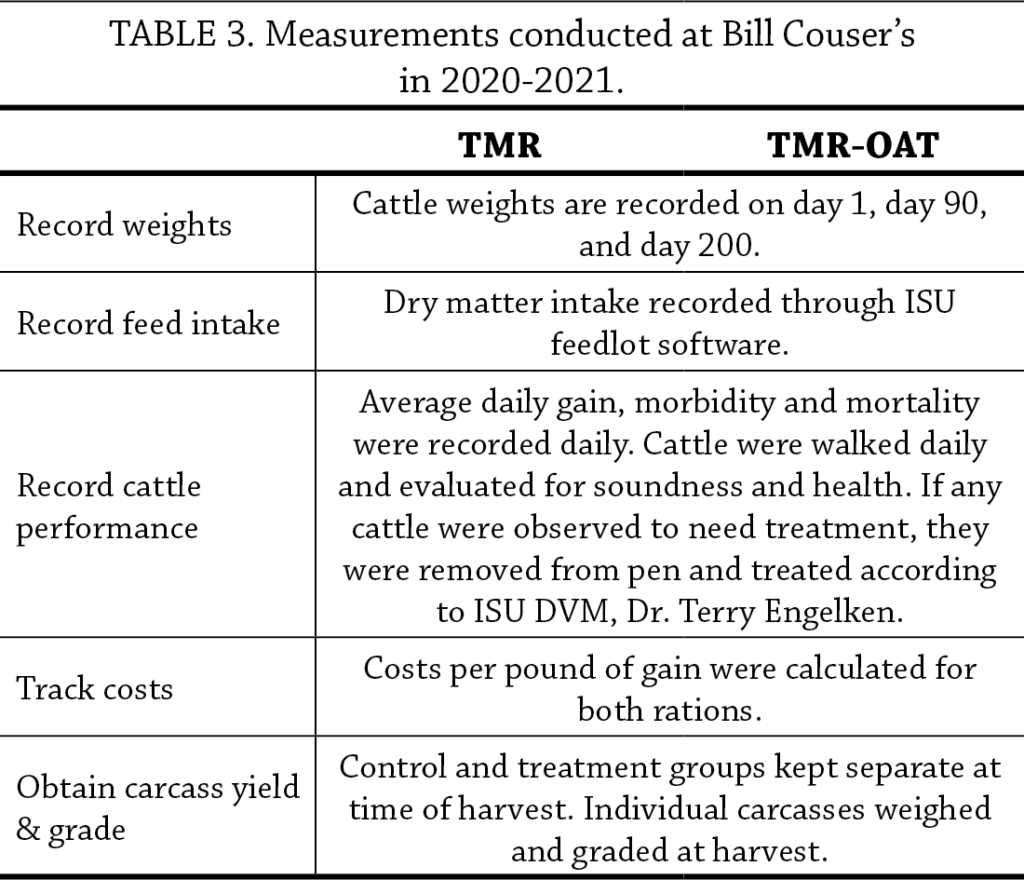 Data were by analyzed by Dahlke, assistant scientist for the Iowa Beef Center at Iowa State University, using a Student’s t-test calculated within Excel to determine statistical difference between the treatments. Statistical significance was determined at the 95%

confidence level. Pens of cattle were considered replicates and individual animals were samples within replications. All individuals within a pen were averaged to provide one response per pen or replication within the treatment and control rations.

Body weights and days on feed 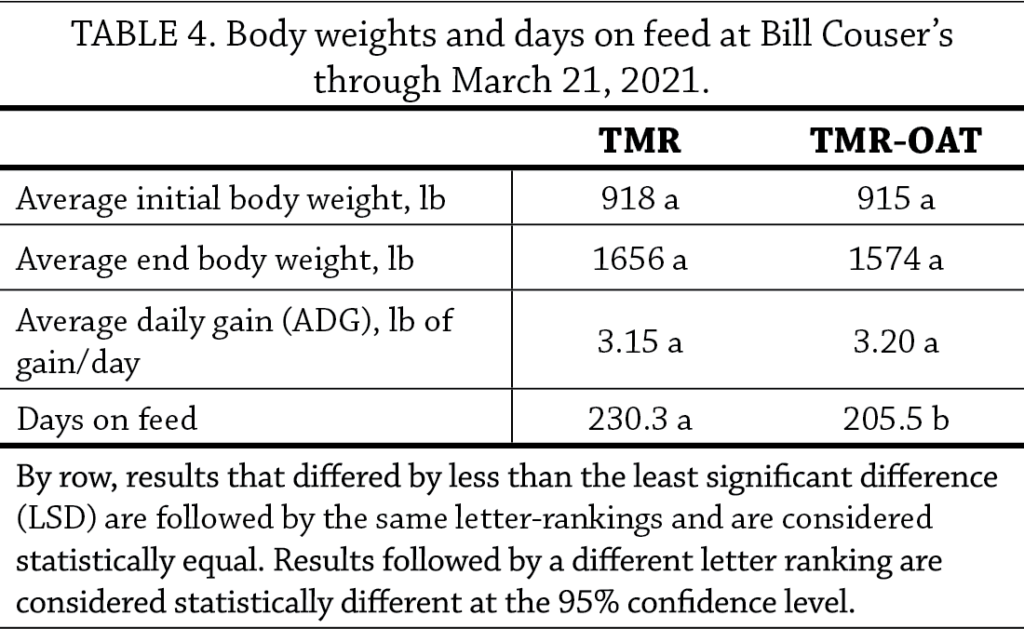 Key performance indicators were evaluated to determine the effect of ration on cattle weight gain (Table 5). Dry matter (DM) intake in the TMR-OAT ration, measured in pounds of feed per day, was higher by 1 lb per day, but not statistically different from the TMR ration. Feed efficiency, or pound of feed per pound of gain, was also statistically equal. Animals that received a health treatment, or morbidity, were counted and measured as a percentage of the total herd within a treatment group. Animals that died, or mortality, were counted and measured as a percentage of the total starting herd within a treatment group. No significant difference was measured between treatments for mortality or morbidity of animals. Overall the pens of animals that arrived at the Couser Cattle Co. and throughout the trial were rarely treated and eight of the total 1,282 animals died during the trial period, accounting for 0.01% of the total animals. 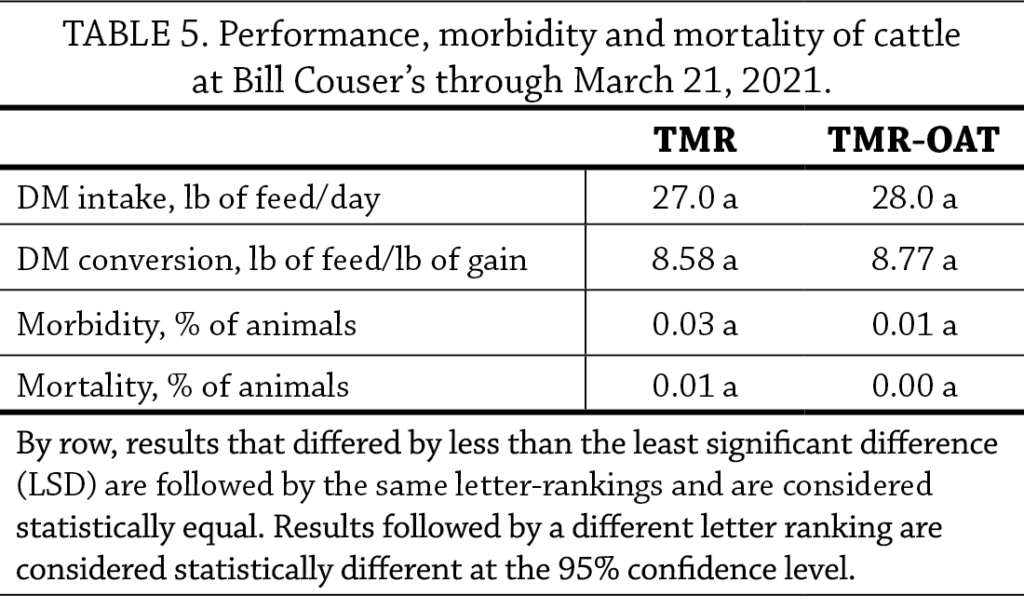 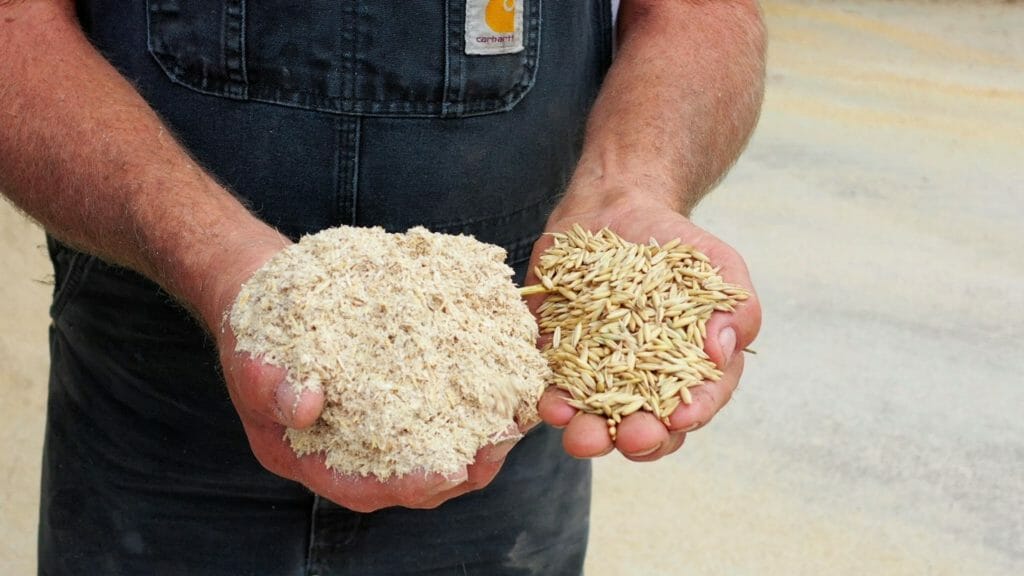 Whole oats, right, were processed then incorporated into the total mixed ration at a rate of 22% dry matter.

The major differences measured during this trial occurred between the costs of feed (Table 6). Oats cost $3.97 per bushel while corn averaged $4.37 per bushel over the trial period; on a per pound basis, oats cost $0.12 per pound while corn cost $0.08 per pound. Oats would need to cost $2.75 per bushel to be on par with the price of corn in this study. The TMR-OAT ration cost $186.36/ton of DM and was significantly more expensive compared to the TMR ration costing $155.13/ton of DM. The cost of feed per pound of gain was higher in the TMR-OAT ration ($0.82) compared to the TMR ($0.67). The dollar per head to finish an animal was statistically greater on the TMR-OAT ration, $1,977.89, compared to the TMR ration costing $1,863.12. The final carcass weight of animals at slaughter was also different among treatments (1,062.93 lb for TMR versus 985.30 lb for TMR-OAT), as was the cost per hundred weight of carcass, $175.27 for the TMR ration and $200.86 for the TMR-OAT ration. As expected, it cost more to finish cattle when oats were included. 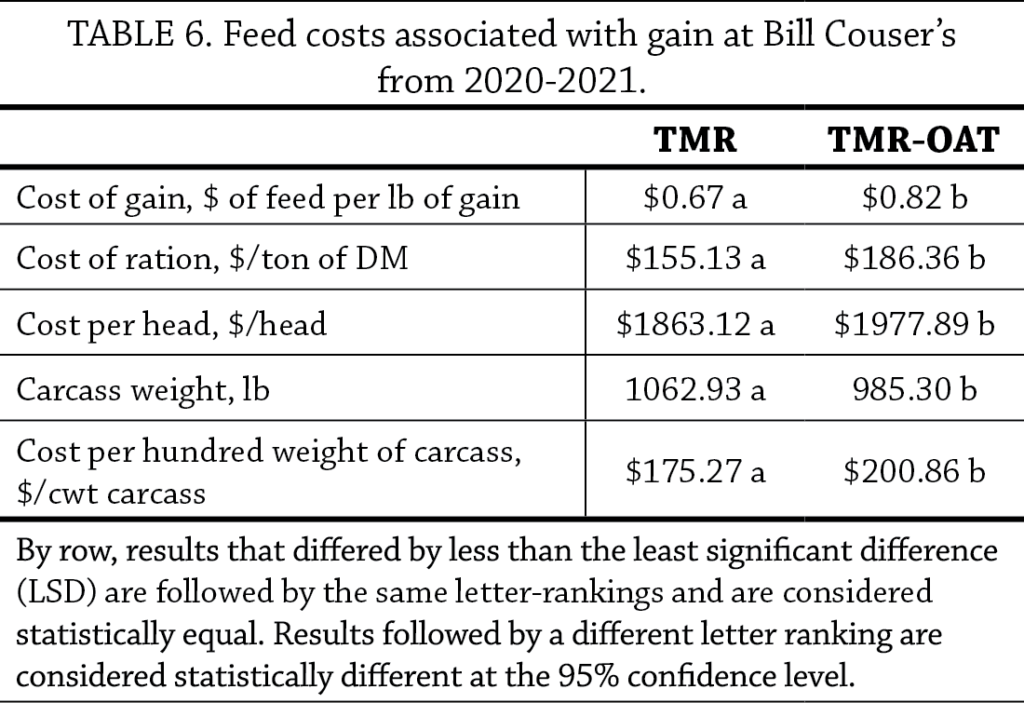 Carcass quality data was collected at the slaughter facility and reported for animals within the different treatment groups (Table 7). The percent yield of the animals, or the amount of meat that was able to be harvested from the carcass, was similar between the two treatments. No differences existed among three of the four beef quality grades: prime, choice and no roll. The TMR-OAT carcasses had a significantly higher percentage of select grade carcasses than the TMR carcasses. Loe stated, “The oat fed cattle graded incredibly well with 85.36% grading USDA Prime and Choice.” 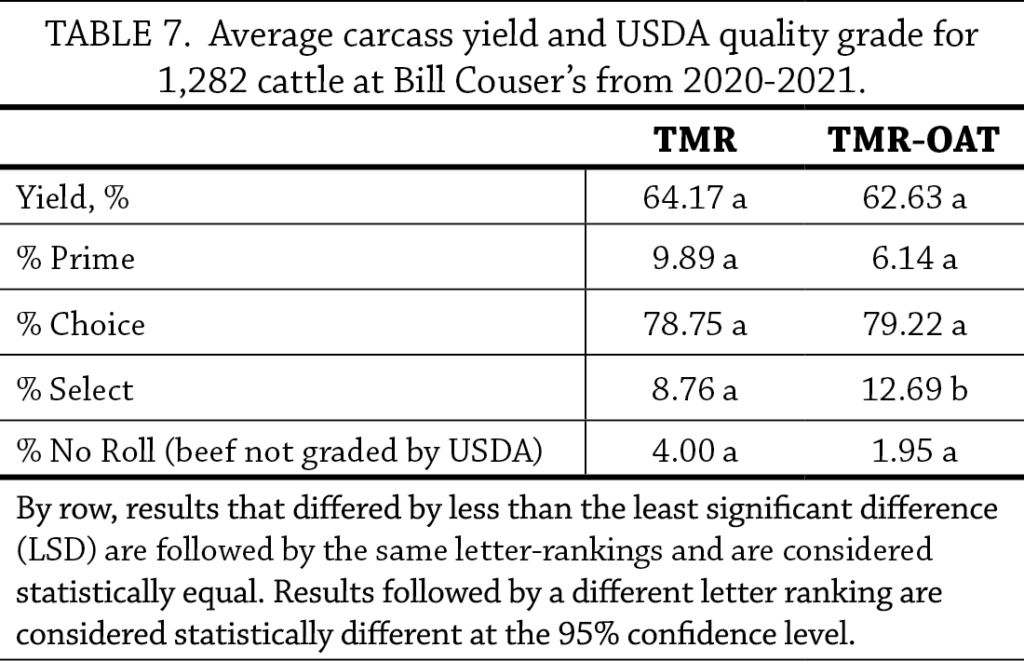 Oats as 22% of a total mixed ration compared to a standard corn-dominant TMR resulted in no statistical difference in body weights, cattle performance or mortality. Oat-fed cattle yielded a higher percentage of select carcasses than standard TMR fed cattle. “Overall, oats were an effective replacement of corn and cattle performed as expected,” stated Loe. It cost more to finish the cattle with the inclusion of oats because the per pound cost during this study was higher than the per pound cost of corn. Oats would need to be purchased at around $2.75/bu to make the cost to finish the animals equal.

The next steps of this trial include summarizing the landscape impact and how a greater number of oat acres grown as cattle feed impacts the ecological footprint of beef production. PFI will also explore potential trials to evaluate animal performance on rations that include different small grains such as wheat, hybrid rye or triticale.

FIGURE A1. The experimental design consisted of ten pens each containing between 114 – 131 cattle each.