This project was supported by the Walton Family Foundation

While cover crops in the Upper Midwest are typically established in late summer or early fall after cash crop harvest, this strategy limits viable cover crop options to winter hardy small grains species like cereal rye or winter wheat. Seeding cover crops earlier in the growing season presents opportunities for including more species diversity. Recent studies in South Dakota showed that corn yields were not compromised after cover crop mixes were seeded to the corn in late June at the V5 stage of corn development.[1] Previous research by Practical Farmers cooperators has found it challenging to successfully establish cover crops when interseeding to corn early in the season when the corn is at the V2 to V4 stage. Jack Boyer had success interseeding cover crops to seed corn. The cover crops survived through the summer and had no negative effect on seed corn yield compared to the no-cover control.[2] Seed corn allows for much more sunlight penetration through the crop canopy to the soil surface than field corn. As such, both Boyer and Jeremy Gustafson assessed interseeding cover crops to corn hybrids with horizontal and vertical leaf orientations. Neither saw a difference in cover crop growth between the corn leaf orientations and Boyer saw a yield reduction from the interseeded cover crops compared to a no-cover control.[3] Most recently, cooperators investigated 60-in.-wide corn rows for interseeding cover crops. Two farms saw similar corn yields to corn grown in 30-in. row-widths; two other farms saw reduced yields with the wider rows.[4] In general, the wider corn row-width resulted in far more cover crop growth. 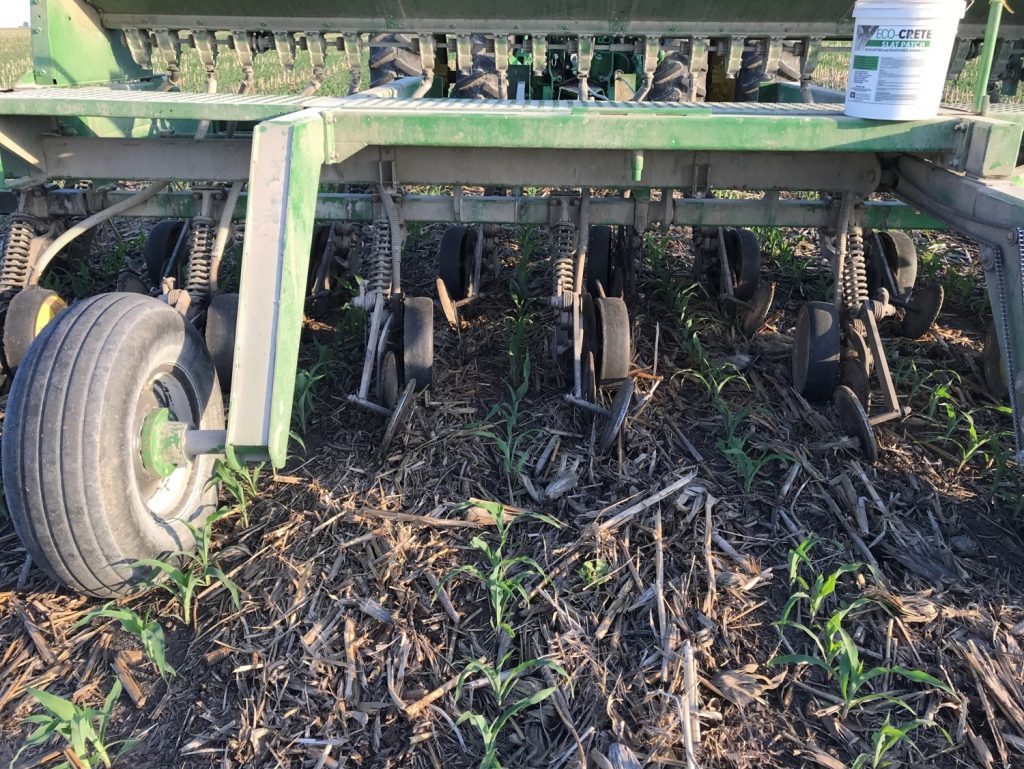 Chris Teachout and Michael Vittetoe have tried interseeding cover crops to corn in small patches of their fields the past few years. Both decided it was time to investigate the practice in experimental trials. “I’ve been hoping to make interseeding a bigger part of our corn program in the future so conducting trials will help us learn how to make that happen.” Vittetoe said at the onset of the study. “We might as well work with PFI to help others learn about the practice,” he added.

Objective: Determine the effect on corn yield of a cover crop interseeded to corn near the V2 corn development stage.

These experimental trials were conducted by Chris Teachout near Shenandoah in Fremont County and Michael Vittetoe near Washington in Washington County. Teachout interseeded a cover crop mix to standing corn and compared the effect of N fertilizer rate (70 and 100 lb N/ac) on corn yield. Nitrogen rate treatments were replicated three times in randomized strips. Vittetoe evaluated the effect of interseeding a mix of cover crops to standing corn on corn yields compared to where no cover crops were interseeded in both 2017 and 2018 (trial in 2018 occurred in the same field as in 2017). Interseeding and no-interseeding treatments were replicated three times in randomized strips. Crop management details for both farms are provided in Table 1.

Teachout collected soil samples to a depth of 6-in. on June 11. Samples were sent to AgSource Laboratories (Ellsworth, IA) to determine the burst of CO2-C following rewetting of dried soil using the Solvita assay. Corn was harvested individually from each strip and corrected to 15.5% moisture.

Corn yield response to interseeding differed between the two years at Vittetoe’s. In 2017, interseeding resulted in a yield reduction of 43 bu/ac compared to no interseeding (Figure 2). Vittetoe blames the reduced corn yields on the tremendous amount of cover crop growth that occurred from the interseeding in early May 2017. That year, he interseeded the cover crop on May 9; 19 days after planting corn (Table 1). By mid-June, some of the cover crops were nearly as tall as the corn (photos below). This likely resulted in competition for water and nutrients with the corn (much like weeds) and reduced yield potential.

In 2018, corn yields were greater in the interseeding treatment by 20 bu/ac (Figure 2). Compared to 2017, Vittetoe observed far less growth and competition from the interseeded cover crops in 2018 that were interseeded on May 24; 33 days after planting corn (Table 1).

“We took a big yield hit from the interseeding in 2017, but all of that cover crop probably helped yields in 2018,” Vittetoe said. Recall that Vittetoe repeated the trial in 2018 in the same location and strips as in 2017. It very well could have been that the large amount of cover crop growth in 2017 improved soil conditions relative to where no cover crop was interseeded. The cover crop mix was made up primarily of legumes and legume cover crops are known to improve corn yields.[6] Across both years, corn yields at Vittetoe’s exceeded the Washington County average of 195 bu/ac[5] regardless of interseeding. 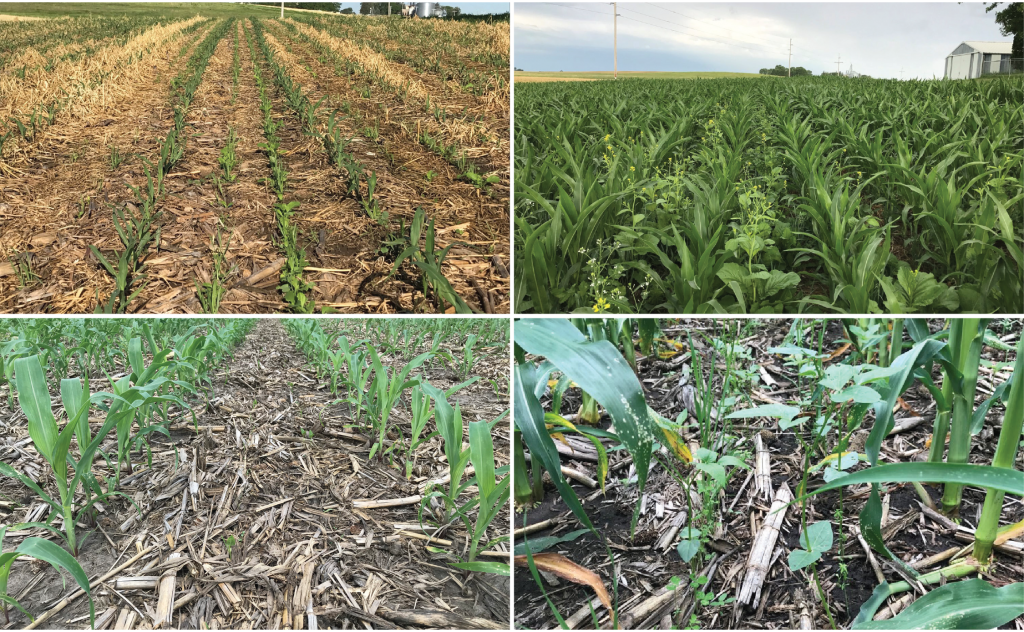 Teachout collected soil samples from all strips in June to determine any soil health differences between N rate treatments. The Solvita assay determines soil microbial activity by measuring the amount of CO2-C respired over a 24-hour period from a dried soil sample that has been rewetted and held at an ideal temperature. At Teachout’s, the N rate did not have an effect on the CO2-C soil burst (Figure 3). 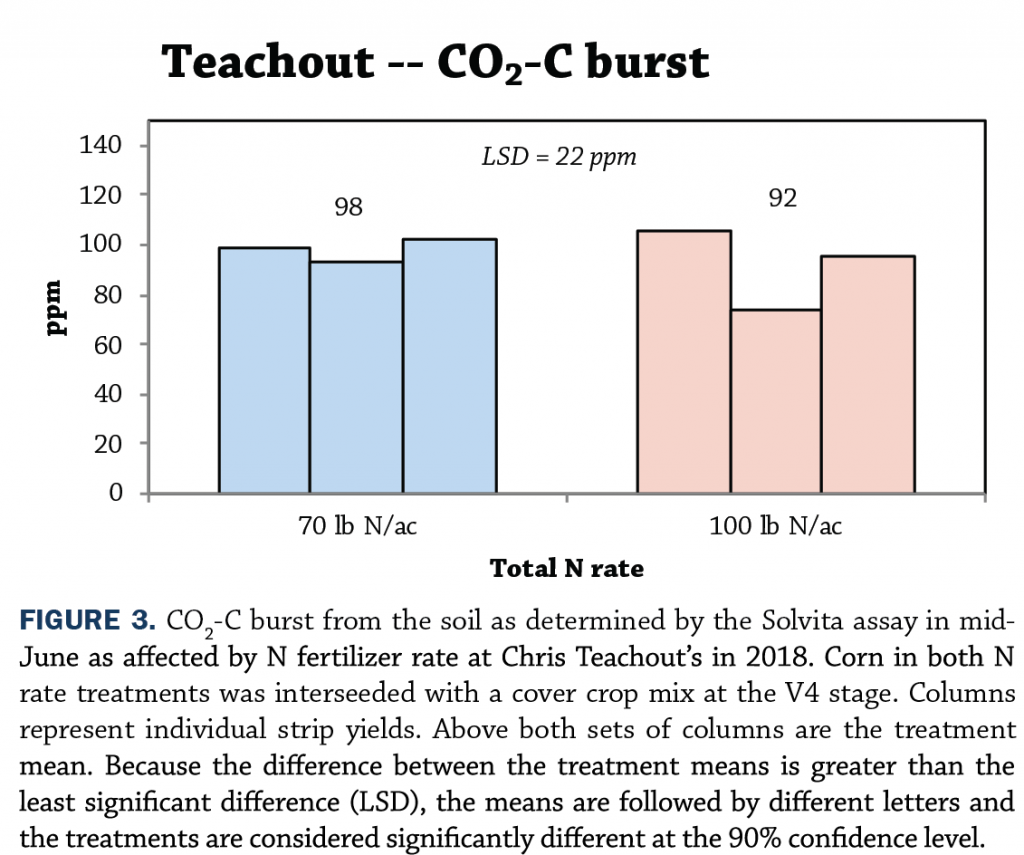 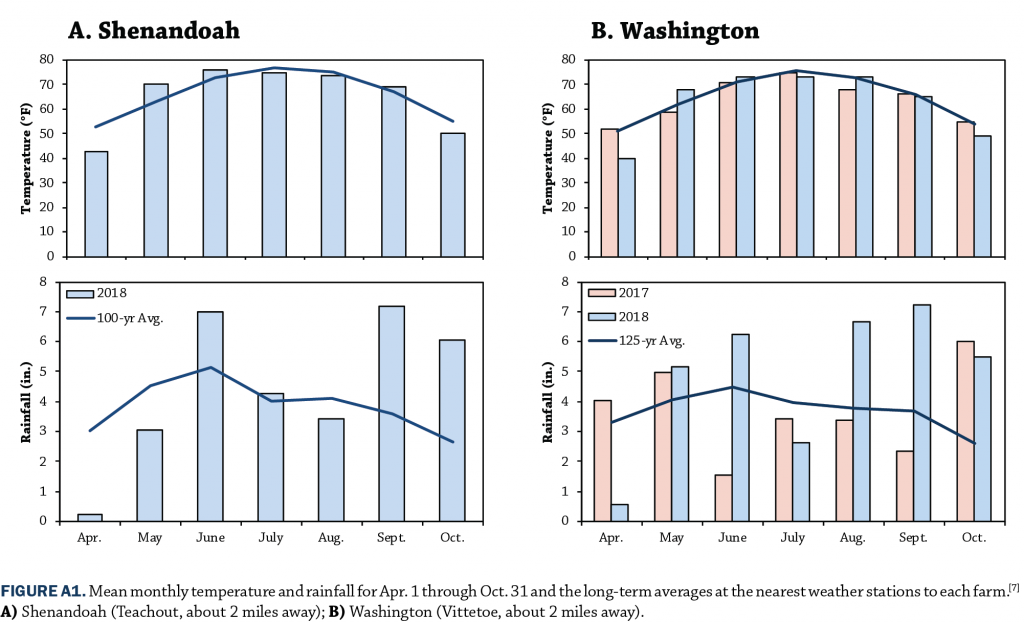