Both Boyer and Sloan planted corn in 2021 following soybeans. In June 2021, they both established two treatments: 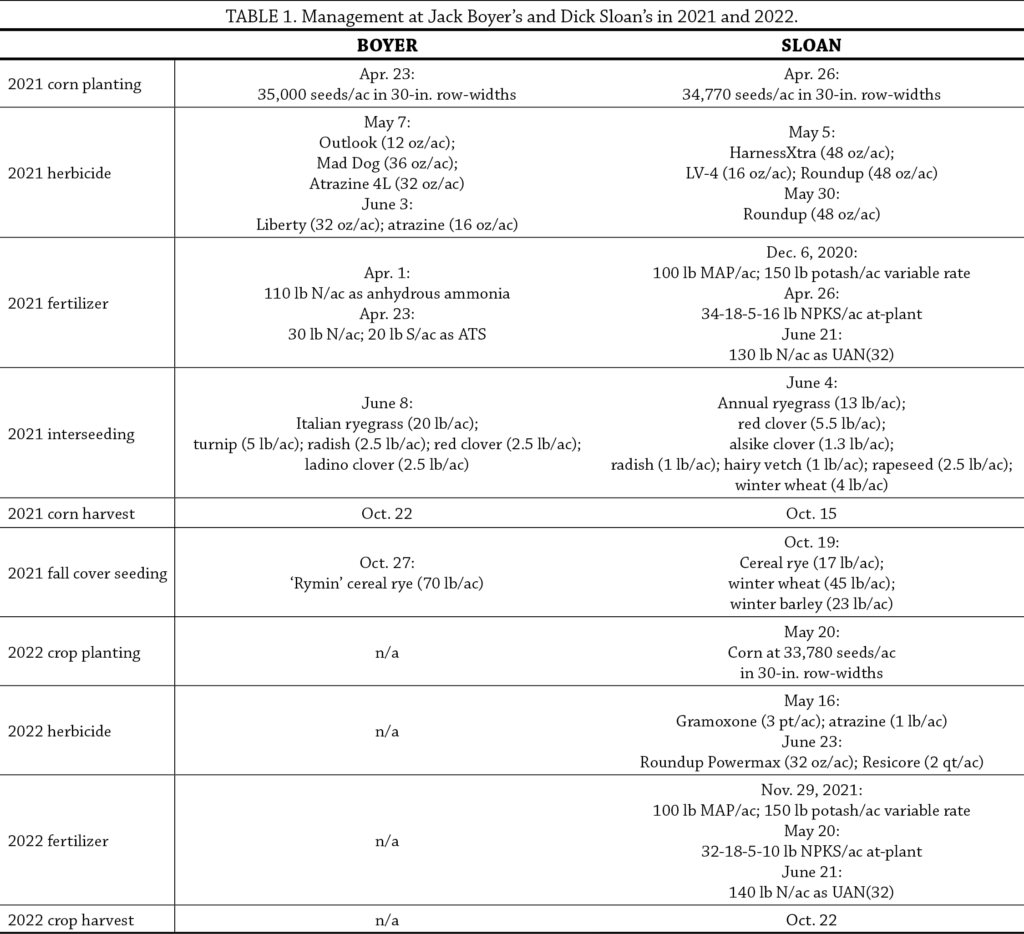 Sloan collected samples of interseeded cover crop biomass from three locations in each strip near the time of corn maturity on Sept. 18, 2021. Sloan weighed the samples after allowing them to air dry for 5 weeks. The following spring, Sloan collected samples of cover crop biomass and groundcover from all treatment strips on May 10, 2022. Biomass samples were collected in the same manner as in fall 2021. To determine groundcover, Sloan took photographs from three locations in each strip and then we analyzed them using Foliage, an open-source web-based application.[1] Boyer did not collect cover crop biomass or groundcover data because the interseeded mix failed to overwinter. He noted that the atrazine included in the June 3, 2021 herbicide application at his farm was by mistake and that it substantially harmed the Italian ryegrass in his interseeded mix.

To evaluate the effect of treatment on cover crops and corn, we calculated the least significant difference (LSD) using a t-test at the 95% confidence level. If the difference between the two treatments was greater than the LSD, we would expect such a difference to occur 95 times out of 100 under the same conditions – we refer to this as a statistically significant effect. On the other hand, if the resulting difference between the two treatments was less than the LSD, we would consider the results to be statistically similar. We could make these statistical calculations because both Boyer’s and Sloan’s experimental designs involved replication of the treatments (Figure A1).

From the samples Sloan collected of the interseeded cover crop in September 2021, the mix produced 98.3 lb/ac.

At both farms, the interseeded cover crop mix had no effect on corn yields in 2021 (Table 2). Note that during 2021 the Fall cover treatment was technically a no-interseeding treatment as far as the corn was concerned that year. 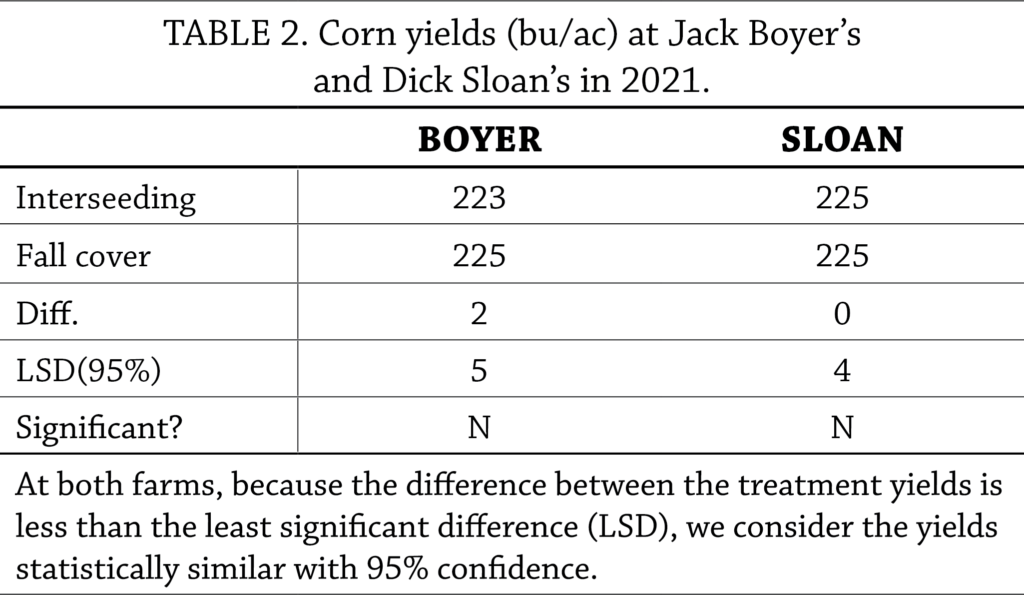 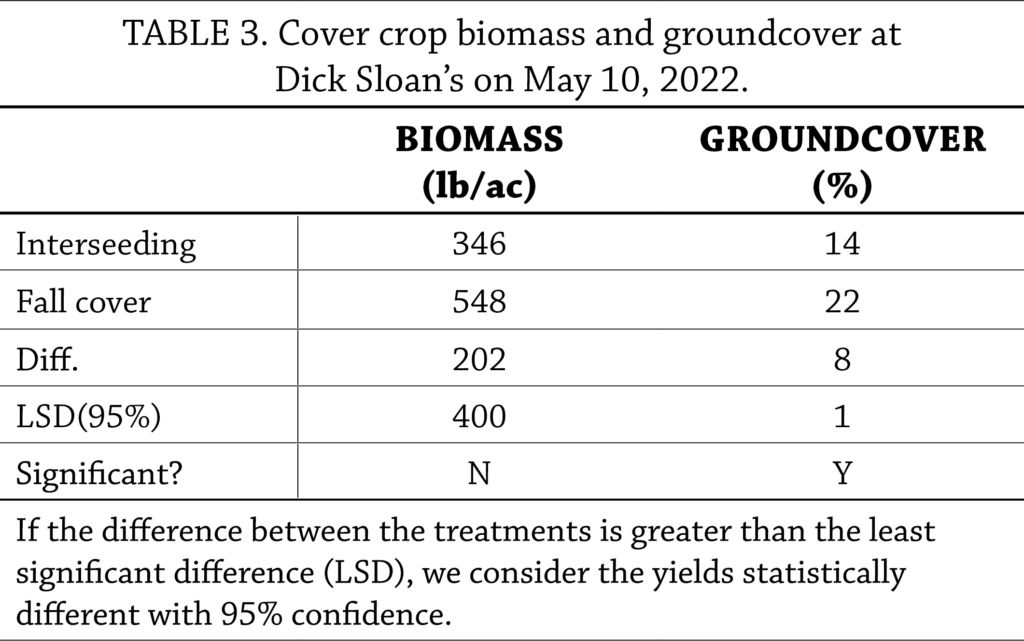 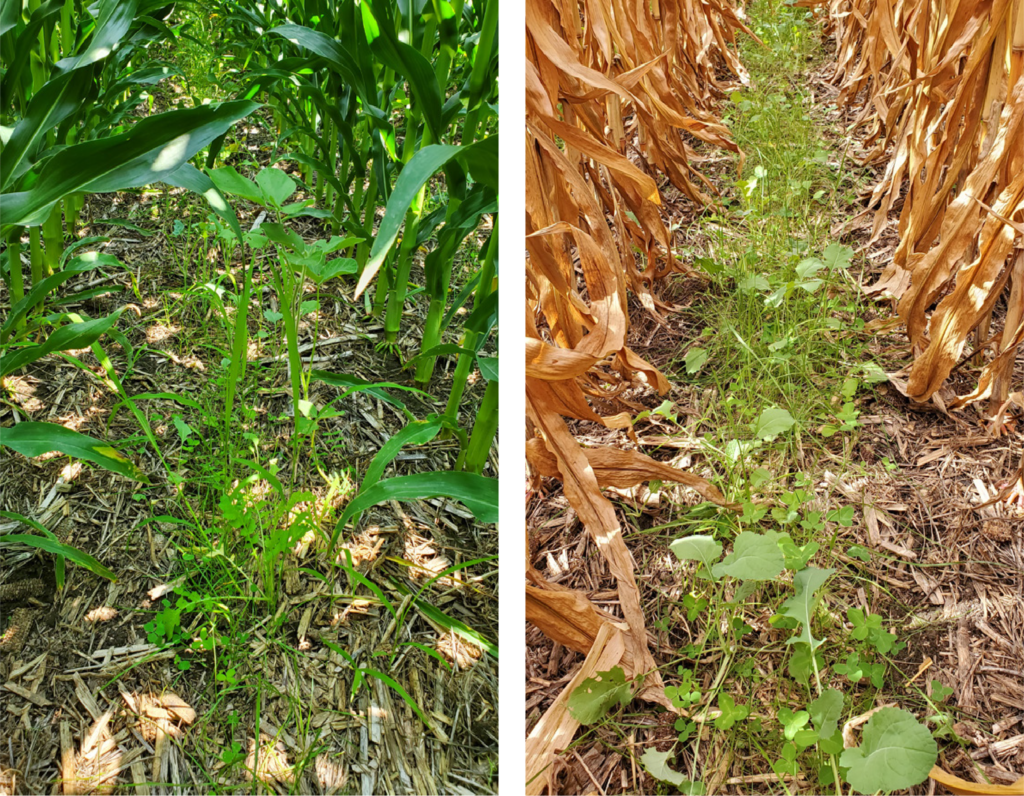 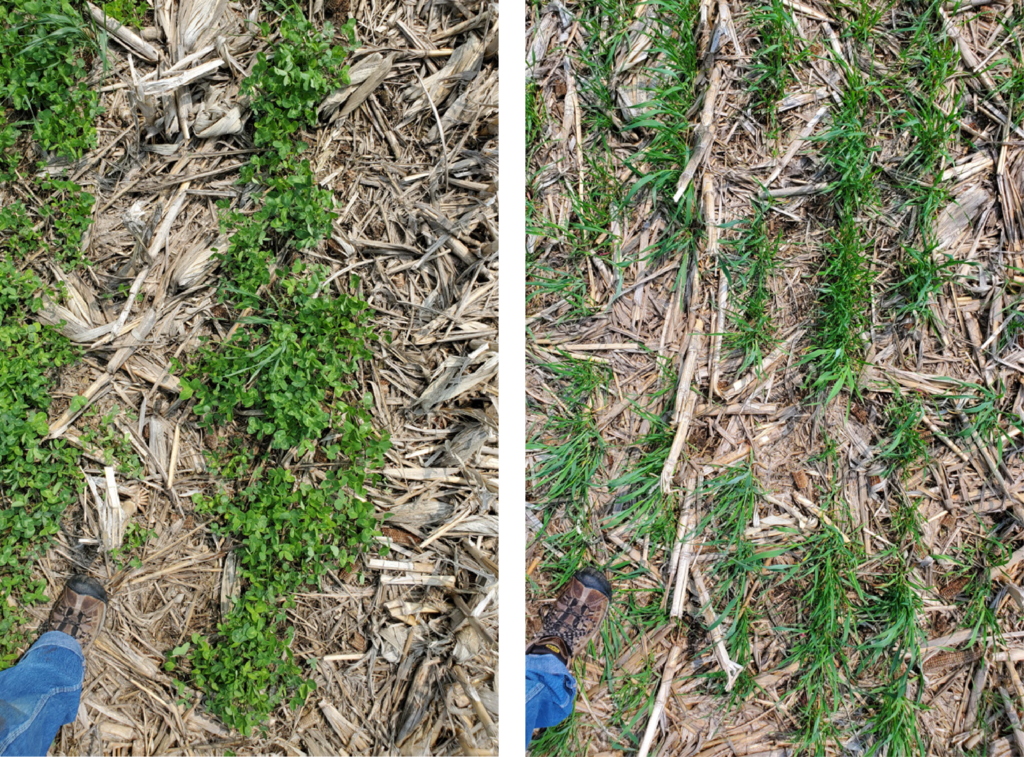 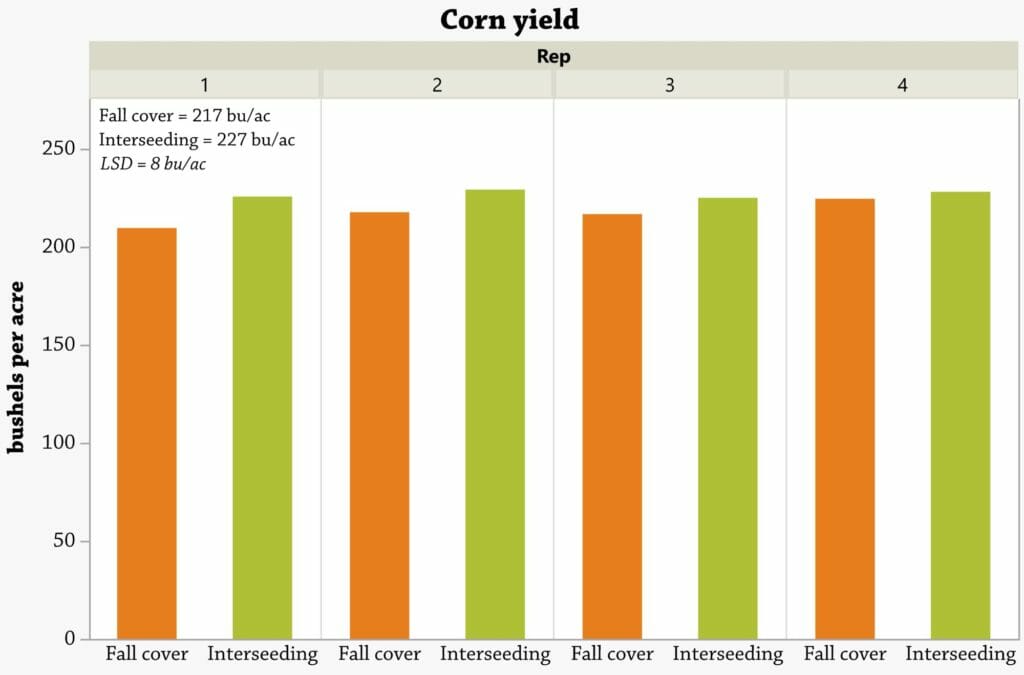 Moreover, the Interseeding treatment resulted in improved net returns by $39/ac (Table 2). The greater costs of the Interseeding were more than offset by the yield improvement. “This trial shows me that it really might be worth the battle to get some perennial legumes, brassicas and other cover crops growing between the rows of first-year corn in my corn-corn-soybean rotation,” Sloan said. “It can be worth the expense to get away from a heavy reliance on winter small grains for cover crops.”

Boyer and Sloan expressed interest in learning about different strategies for incorporating cover crops on their farms: be it cover crop species other than winter small grains or seeding cover crops in the summer rather than post-harvest in the fall. Both have had plenty of success with winter small grains like rye and wheat for years. Boyer has tried summer interseeding for a few years and has evaluated numerous species. This trial helped him identify species that may not be successful when interseeding to corn on his farm. Sloan, on the other hand, did have success with interseeding. He found this appealing because if interseeding in the summer can be a successful strategy it would reduce pressure in the fall for getting other acres on the farm seeded to cover crops. “I need to add more legumes to my cropping plans. If I can establish clover in my corn the same as I do with my small grains, it can thrive once the corn is harvested and continue to thrive the next spring,” Sloan said. “I accept that I had some beginner’s luck but it’s really fun to see a cover crop change give a significant boost to second-year corn yields.” When considering how to continue this practice on the farm, Sloan added the he would like to improve his interseeder with better planting units in order to get a reliable, consistent cover crop established in the summer underneath the corn canopy. “The plants we can grow with interseeding are so different than the ones we plant in October.”

FIGURE A1. The cooperators’ experimental design consisted of four replications of the two treatments. This design allowed for statistical analysis of the data. 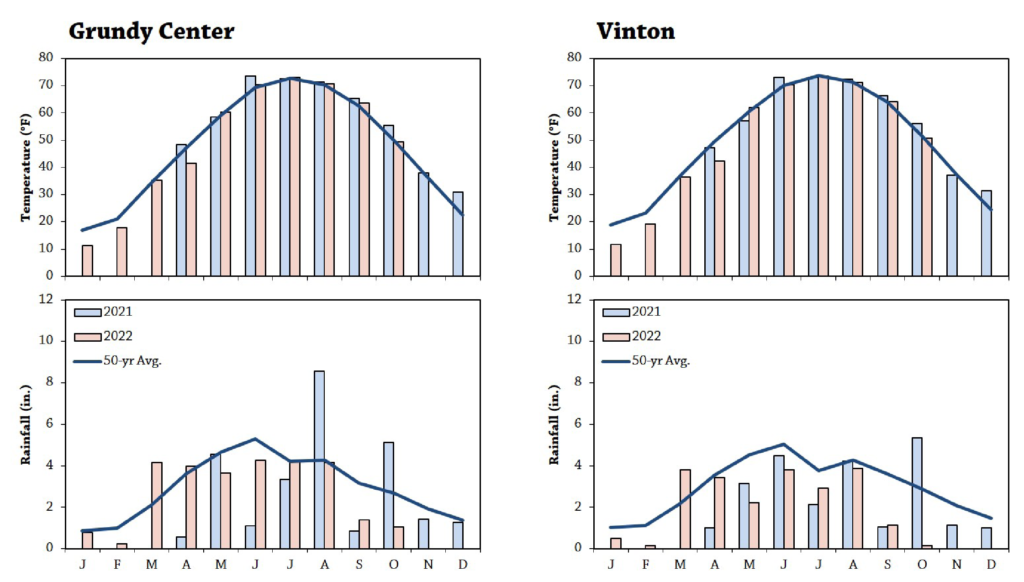 FIGURE A2. Mean monthly temperature and rainfall during the trial period and the long-term averages at the nearest weather stations to a) Boyer’s (Grundy Center) and b) Sloan’s (Vinton) farms.[2]