Inspired by the floods of 2019, Arthur and Lee Wisecup have embraced an ambitious cover crop strategy for their river-bottom farm

Like many farmers near the Missouri River in 2019, father-son farming team Lee and Arthur Wisecup found themselves looking for something creative to do with some of their farmed acres as flooding in March and May disrupted normal operations. 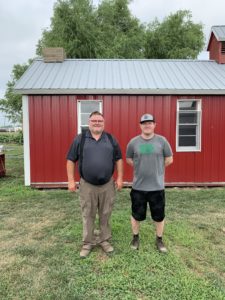 Lee Wisecup, left, and his son, Arthur Wisecup, are working together to expand cover crops and conservation on their fourth-generation family farm.

Historic floods that year, which affected nearly 14 million people in the Midwest and South, caused extensive damage to homes, communities and farms along the river and its tributaries, as well as other rivers in the region. Seeking to improve soil health, suppress weeds and learn how to work with cover crops, Lee and Arthur decided to plant a multi-species cover crop mix on 500 of their 1,600 acres near Missouri Valley, Iowa.

“Half our acres we did not plant [in 2019] because we had a wet spring,” Arthur says. “So we got into doing a lot of prevent-plant acres with about eight or 10 different cover crop species. We really liked planting soybeans into that, so the following year, we started planting cereal rye. Our main goals are soil health and weed suppression.”

Just three years on, they are proving that productive river-bottom farmland is prime ground for cover crops and conservation. Committed to using practices that boost profits while protecting the environment, the family has embraced an ambitious cover crop adoption strategy that includes experimenting with roller-crimping and different cover crop mixes.

That commitment culminated this year in a new milestone: For the first time, the Wisecups covered all 1,600 acres of their cropland in diverse cover crop mixes ahead of the 2022 growing season. In July, they also hosted their first PFI field day to share what they have learned about integrating cover crops and conservation on their farm.

Arthur and Lee are part of Wisecup Family Farm and Museum, which is home to four generations of farmers: Arthur, his father Lee, grandfather Charlie and their families, who all play an integral part. Established in 1942, the farm today is a mix of conventional corn and soybeans planted into diverse cover crop mixes, restored wetlands, pollinator and quail habitat and an on-farm museum.

The family’s journey towards more conservation practices on the land picked up after Arthur returned to the farm in 2014 from Doane University, in Crete, Nebraska, where he studied environmental science. While the family had started experimenting with no-till in 2010, once Arthur returned, they invested more time and energy pivoting towards a no-till cover crop system. By 2020, the Wisecups had transitioned all their acres to no-till.

In 2018, the Wisecup family enrolled 237 acres of their land into the federal Conservation Reserve Program and installed wetlands. Their commitment to conservation has not gone unnoticed: In 2019, the family received the Pheasants Forever & Quail Forever Precision Farmer of the Year Award.

In 2020, the family got involved with Practical Farmers through PFI’s cover crop cost-share program, which has helped them in their push to expand cover crops on their land. One of their goals, as conventional farmers, is to find ways to reduce herbicides and synthetic nitrogen. They are making progress. “We have noticed some reduction in herbicide use,” Arthur says. “Nitrogen reduction has been trial-and-error. We are learning but we are confident in cover crops.”

In July, Arthur and Lee hosted a field day to showcase practices they have adopted in their recent journey with cover crops and no-till. “We want farmers to not be afraid to plant cover crops on the river bottom,” Lee says. “Very few people are doing it in our local area.” 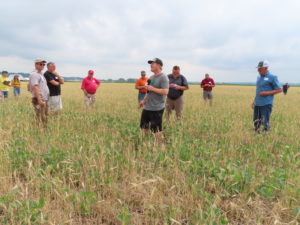 Arthur Wisecup speaks to attendees at the family’s July 16 field day at their farm near Missouri Valley, Iowa.

The event was an opportunity for Arthur and Lee to highlight their cover crop mixes for corn and soybeans, their first attempt using a roller-crimper and their ongoing experiments – including on-farm research looking at short-stature and short-season corn. They also shared some of the changes they’ve noticed since adding cover crops, as well as some of the challenges they’ve encountered – like seeding cover crops in the mud. Before planting cover crops, for instance, Arthur says compaction was a noticeable problem. Now, in the short time since they’ve planted covers, the soil structure is starting to improve and water is draining more easily.

“We’re trying to get a coffee ground-like structure, and we are starting to see that structure versus a thick layer of compaction,” Arthur says. “Compaction is probably our biggest worry for corn.”

Getting the Job Done

Part of the Wisecups’ learning process has involved experimenting with the best ways to seed their cover crop. Common seeding methods include aerial seeding, drilling and broadcasting after harvest in the fall. Different factors can influence the choice of seeding method – such as what equipment a farmer already has that can get the job done.

“Going big” with covers requires thinking ahead and looking for new ideas, particularly when trying something outside the norm. For Arthur and Lee, this has involved finding creative ways to outfit their existing seeder to save money while making it work better for diverse cover crops mixes. 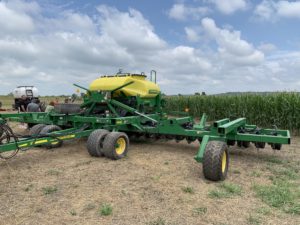 The Wisecup family has been using their 1990 CCS John Deere air seeder to seed their cover crops, and they continue to modify it so it works better for their cover crop goals.

Currently, they use a 1990 CCS John Deere air seeder with single-disc no-till openers to seed all of their cover crops and soybeans. In the fall of 2021, Arthur and Lee used it to seed a cover crop mix of cereal rye, barley, rapeseed and winter camelina ahead of their corn and a mix of rye and barley ahead of their soybeans. The family has owned the seeder for about 10 years and continues to add new technology to it.

“Last year, we completely rebuilt the air seeder without having to buy a new one,” Arthur says. “It had a new serial number put on it because we added more computers. The frames don’t really go bad. It’s all the wear and tear on parts.”

Parts such as closing wheels and springs, for instance, typically require replacement every 5,000 acres. With the current air seeder, Arthur says they can control how densely cover crops are planted by adjusting the seeder’s seed-metering wheels that control seed to the row units.

So far, Arthur says the air seeder has worked well on their wet, muddy river-bottom ground. It has good seed-to-soil contact, which helps ensure the seeds germinate. It also pairs well with the family’s precision technology, which they began using in 2012 and is now an integral part of their operation.

The Wisecups would now like to get a no-till drill with at least two seed tanks that will let them plant multiple cover crop species simultaneously. “With two tanks, we’re hoping to split the winter camelina to give it a better chance to start growing than it has in the blended tank,” Arthur says.

The new planter also needs to successfully plant their cash crops. Lee and Arthur recently tested a multi-tank minimum-till drill and immediately ran into some snags. “We hoped that minimal-till would be sufficient to plant soybeans into corn stubble, but the row units did not operate evenly in their full no-till system,” Arthur says. “It was shooting the beans on top of the ground instead of putting it in an inch deep.”

An uneven planting depth will lead to poor emergence and a poor stand. While they’re back to the drawing board, father and son continue to workshop ideas that will let them plant at the correct depth in a no-till system. “We’re hoping we can work with our local John Deere to build something,” Arthur says.

While the Wisecups continue to experiment and refine, the cover crops trajectory spurred by the floods has blossomed into committed curiosity about the ways cover crops can help them build farm resilience – and that is perhaps a silver lining of the disaster: After successfully covering all of their acres, they are now poised to envision even more ambitious ways to improve cover crops and conservation on their farm.

Next article: “Pathways to Peppers”