With proper management, a cereal rye cover crop can maintain, or improve, corn and soybean yields compared to when no cover crop is used.[1] Because cereal rye cover crops can result in early season soil and fertilizer N immobilization that can negatively affect crop yields, [2,3] proper management includes considerations for cover crop termination date and a sufficient N fertilizer program. On-farm research conducted by PFI cooperators Jack Boyer and Jeremy Gustafson has shown no yield penalty to soybeans that were planted directly into a living cereal rye cover crop that was terminated within the next few days.[4,5] Attempting the same approach with corn, PFI cooperators Dick Sloan and Tim Sieren saw corn yields reduced by 5–21 bu/ac compared to when the cover crops were terminated at least two weeks prior to planting the corn.[6,7] When a cereal rye cover crop is terminated two weeks prior to planting corn, research by PFI cooperators[7,8] and scientists at Iowa State University[9] suggests that higher N fertilizer rates are not required for optimal yields. Those studies found that applying the same amount of N fertilizer as one would with no cover crop resulted in similar corn yields. Finally, research in southeast Ontario found that equivalent corn yields can be achieved among full-width tillage, strip-till and no-till systems when a cereal rye cover crop is terminated two weeks prior to corn planting.[10] Costs among tillage regimes, however, can vary and farmers often wonder about the ultimate impact of tillage passes on returns on investment.

At left, corn was no-till planted into a cereal rye cover crop. At right, corn was planted following as strip-till pass. Photo taken on Apr. 30, 2018 at Tim Sieren’s.

“I’ve been noticing higher yields when strip-tilling corn into rye cover crops,” Sieren said about his motivation for conducting this trial. “I wanted to do a comparison with no-till to see just how much a difference there is in yield between the two.” Boyer was curious to learn about any yield differences between no-till and strip-till as well. “Hopefully I can also learn if my N fertilizer rate can be reduced,” he said.

This study was conducted by Jack Boyer near Reinbeck in Tama County; Tim Sieren near Keota in Washington County; and Jeremy Gustafson near Boone in Boone County. All three cooperators seeded a cereal rye cover crop in Fall 2017 and evaluated the effect of no-till planting or strip-till planting on the succeeding cash crop in 2018. Boyer and Sieren planted corn; Gustafson planted soybeans. 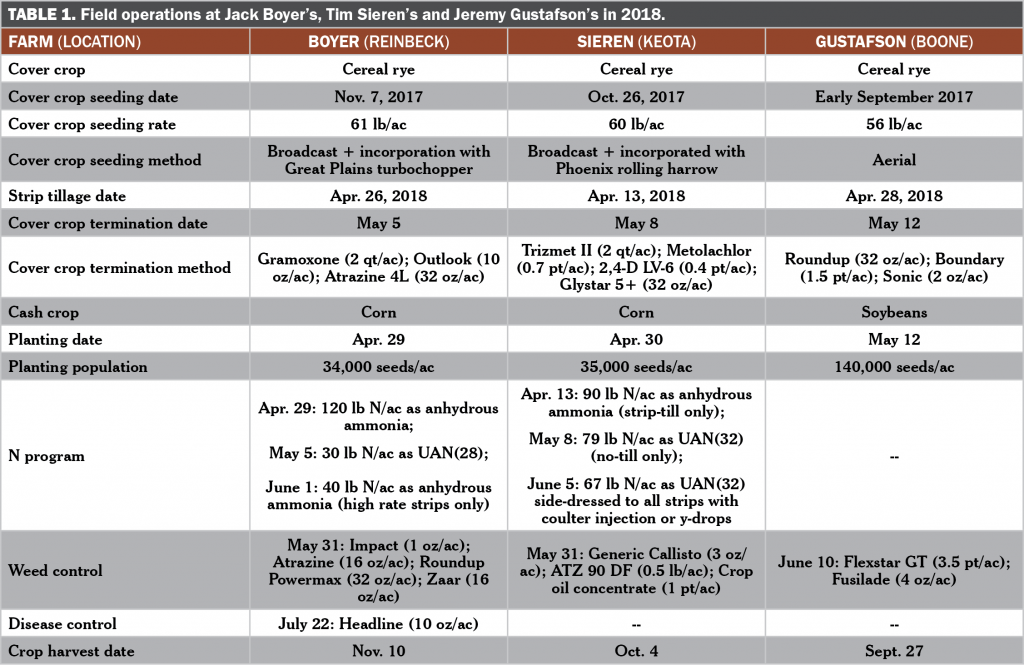 Incidence of corn seedling disease was assessed in late May at Boyer’s and Sieren’s by Dr. Alison Robertson’s lab team from the ISU Department of Plant Pathology and Microbiology. This assessment occurred before the split-plot treatments were established at either farm.

Soil samples were collected to a depth of 6-in. in mid-June at the Boyer and Sieren farms. Samples were sent to AgSource Laboratories (Ellsworth, IA) to determine the burst of CO2-C following rewetting of dried soil using the Solvita assay. Corn stalk samples were collected for NO3-N concentration analysis after the corn reached physiological maturity at Sieren’s on Sept. 13.

Air temperatures during the February–April period at all farms were below the long-term normal (Figure A1). This, along with a very dry April at each farm, likely contributed to low amounts of cover crop growth observed during the spring. As such, Boyer and Sieren terminated their cover crops approximately one week after planting corn (Table 1). Gustafson terminated his cover crop the same day he planted soybeans. Though Boyer did not collect samples, he estimated the cereal rye cover crop was approximately 4 in. tall at the time of termination. The average amount of cover crop biomass prior to termination at Sieren’s was 348 lb/ac (eight days after planting corn). At Gustafson’s, the average amount of cover crop biomass at termination was 832 lb/ac.

The Solvita assay determines soil microbial activity by measuring the amount of CO2-C respired over a 24-hour period from a dried soil sample that has been rewetted and held at an ideal temperature. Neither the tillage treatments at both farms nor the N rate at Boyer’s or side-dress method at Sieren’s had any effect on the CO2-C soil burst (Figure 1). 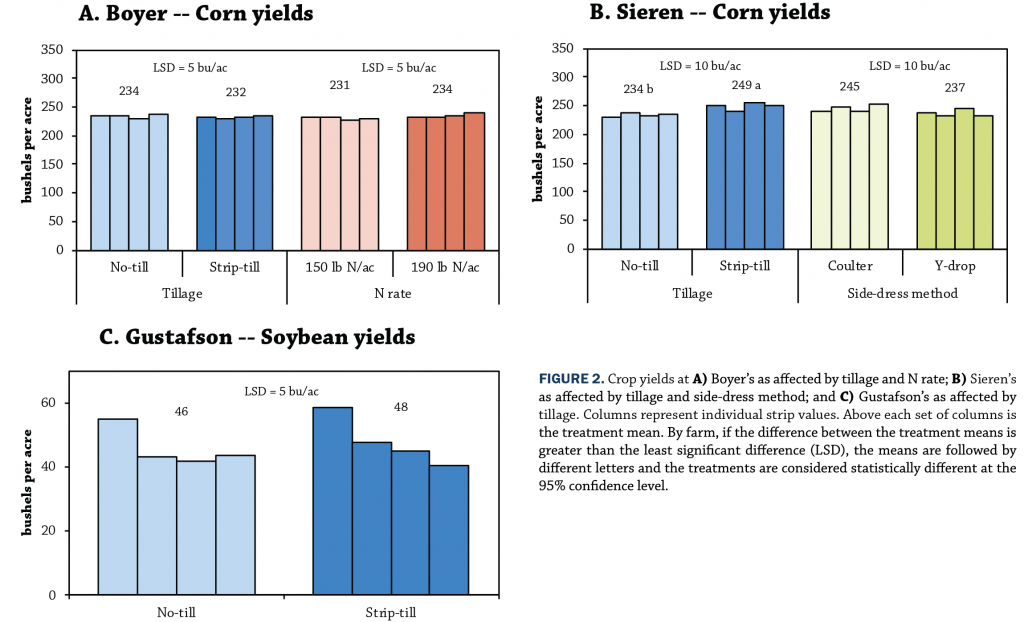 Corn yields at Boyer’s and Sieren’s far exceeded their respective five-year county averages of 192 bu/ac and 195 bu/ac.[13] Soybean yields at Gustafson’s fell below the five-year Boone County average of 52 bu/ac.[13] June through September was exceptionally wet at Gustafson’s (Figure A1) and he noted substantial ponding in the field which may have reduced yield potential.

Tables 3–5 provide partial budget summaries of the costs, receipts and returns on investment for the treatments at the three farms. Costs associated with cover crop seeding, cover crop termination, crop planting, in-season weed control, fertilizer application and crop harvest were incurred among all treatments and are thus not considered when calculating the returns on investment. Rather, only the costs that differed among the treatments at each of the three farms are considered in the partial budget summary tables. Because tillage did not affect yields at Boyer’s or Gustafson’s (Figure 2), strip-till reduced returns compared to no-till at both farms (Tables 3 and 5). At Boyer’s, the high fertilizer rate (190 lb N/ac) also reduced returns as he saw no difference in corn yield between the two N fertilizer rates compared (Figure 2A). Greatest returns on investment at Boyer’s were achieved with no-till and 150 lb N/ac (Table 3). Unlike at Boyer’s and Gustafson’s, however, strip-till improved yields at Sieren’s (Figure 2B). The cost of strip tillage (and the additional 11 lb N/ac as anhydrous ammonia Sieren applied to that treatment) appears warranted at Sieren’s as he saw returns increased by more than $31/ac in the strip-till treatment (Table 4). Though he applied an additional 11 lb N/ac to the strip-till treatment, N fertilizer costs were nearly identical between the tillage treatments at Sieren’s. The corn yield improvement achieved with strip-till more than paid for the higher costs incurred in that treatment in Sieren’s case.

This study evaluated the effect of no-till and strip-till on corn and soybeans when following a cereal rye cover crop. The three farmers involved wanted to know if corn or soybean yields, and returns on investment, could be improved with strip tillage in a cover crop system.

Strip-till both improved corn yields and returns at the Sieren farm only. Sieren suspected he was achieving better yields on his farm with strip tillage: “This trial confirmed the yield increases [I’ve been seeing on my farm] with my strip-till practices.” Corn yields at Boyer’s and soybean yields at Gustafson’s, however, were no different between the no-till and strip-till treatments. At those two farms strip-till reduced returns; no-till proved the better system. Moreover, Boyer saw similar corn yields between two N fertilizer rates (150 and 190 lb N/ac). He credits this trial with helping him realize the opportunity to reduce crop input costs: “I believe that I can reduce N application and no-till plant corn without reducing yield.” As a result of this project, Boyer and Gustafson plan to further expand their use of no-till when planting corn and soybeans, respectively, following a cover crop. Sieren, having achieved better yields and returns with strip-till, plans to try strip-till in more of his fields with cover crops to see if he can reap similar results as those he observed in 2018.