The difference between annual, biennial and perennial plants is simply the number of years they require to complete all stages of their life cycle. Seeds of tomato, an annual, are planted in the spring, undergo rapid vegetative then reproductive development throughout the summer, and then die before winter. Perennials begin in the same way, but undergo a dormant period between vegetative and reproductive development. Dormancy carries them through the cold winters before longer daylight hours and warmer temperatures trigger a break in dormancy and the onset of reproductive development. If the plant is a biennial, it would fruit and set seed then die before the next winter; but if it is a perennial it would live on in a similar fashion into the third year or longer. For the sake of maximizing time and space, farmers often grow biennials as annuals. This is possible because the parts we wish to consume – leaves, for example – are already harvestable in the first year.

In typical cooperator fashion, Jon Yagla, Hannah Breckbill and Emily Fagan were curious to see if they could fiddle further with plant life cycles. They wondered if they could plant biennial and annual salad greens in the fall, then overwinter them for spring harvest before they bolt. They hoped that by overwintering very young, immature greens they could trick the plants out of breaking dormancy and starting reproductive development the next spring and instead get good harvest early in the spring from rapid vegetative growth of young seedlings. 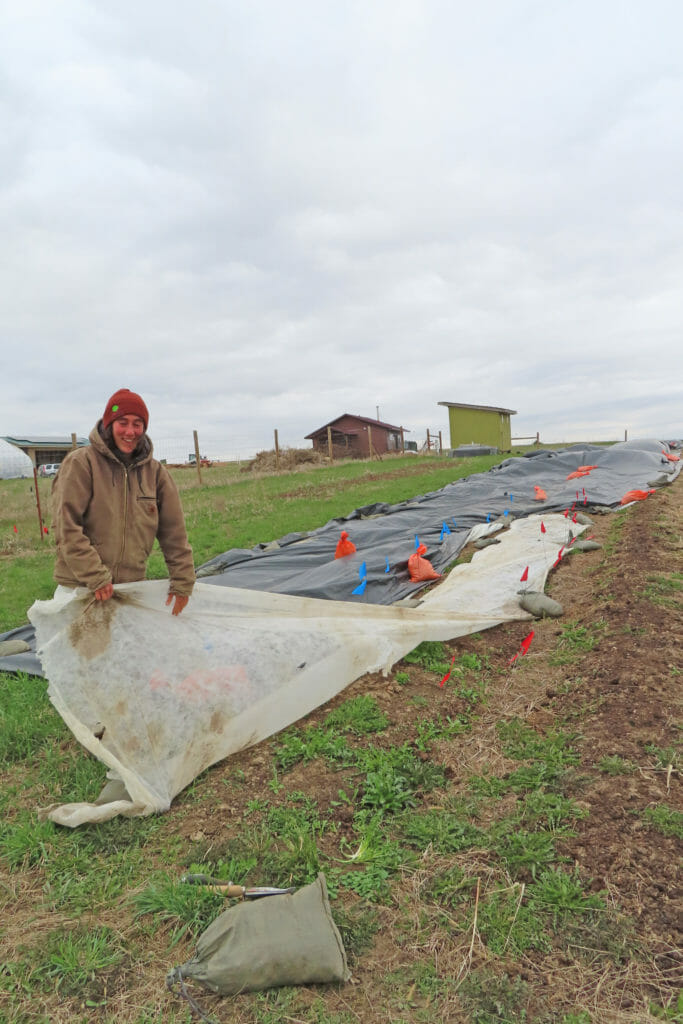 The objective of this trial was to determine which of several salad greens species are most cold-tolerant for overwintering. Jon Yagla commented, “I hope to have a better understanding of which greens, besides spinach and cilantro, overwinter well in Iowa. This will help with early greens production without the use of expensive high tunnels and living roots in the soil for longer periods of time, which is a goal for improved soil health.” Fagan added, “This will help us learn more about how to have a variety of greens ready to sell as early as possible in the spring.” 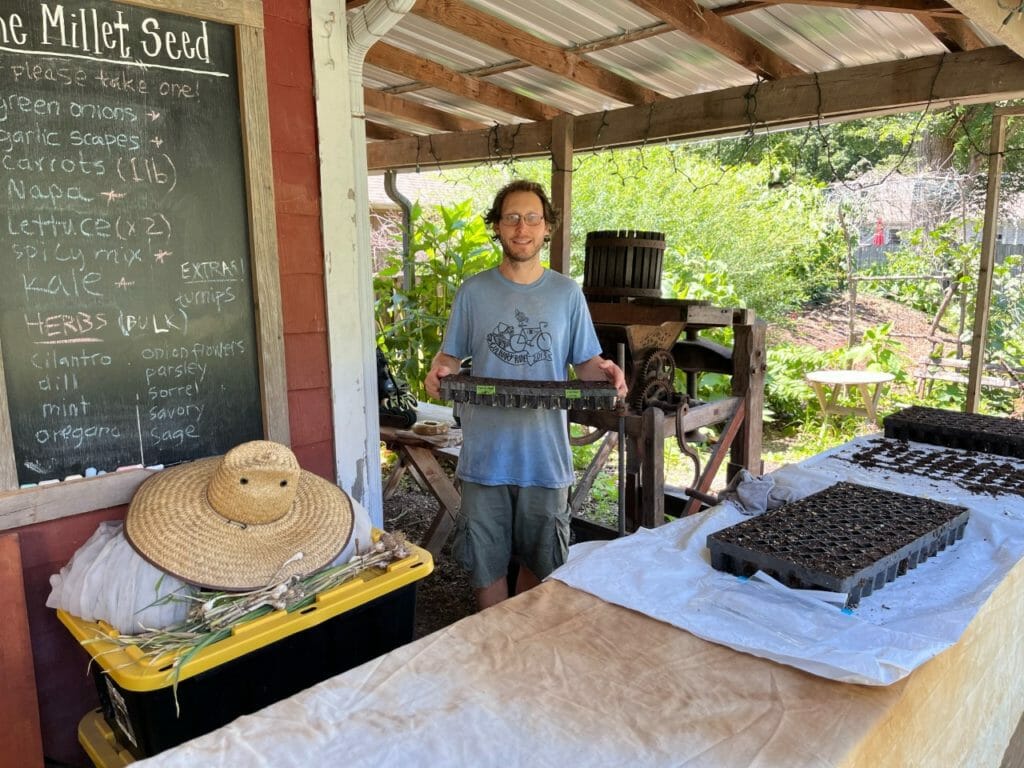 For this trial Breckbill, Fagan and Yagla each chose a selection of cold-tolerant greens varieties to seed in late September 2021. For detailed management information, see Table 1, and for the full list of species and varieties planted at each site, see Figures 1 and 2. The growers planted two replicate plots of each variety. At both sites, the growers planted 20 seeds per plot in a single row measuring 2 ft in length, then covered plots with floating row covers. For a sample plot layout, see Figure A1.

Shortly after planting (Sept. 25, 2021), Yagla discovered severe damage to several plots caused by squirrels. On Oct. 8, he re-planted several plots. On December 15, after experiencing damage in another trial from deer feeding, Yagla added additional protection to his plots in the form of a caterpillar tunnel but removed one layer of row cover fabric to prevent overheating.

The growers were interested in sampling a large number of greens varieties to overwinter rather than comparing a small number. To encourage initial testing and to accommodate space constraints, two replications of each variety were planted rather than the standard of four replications. For this trial we used numerical comparisons rather than statistical comparisons to narrow down the number of species that might be best to test in future trials with thorough statistical analysis. 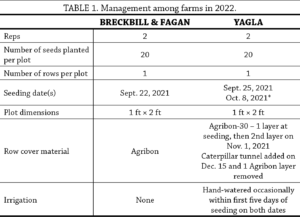 * Some plots were re-seeded after squirrels accessed plants underneath row cover and dug up portions of several beds. 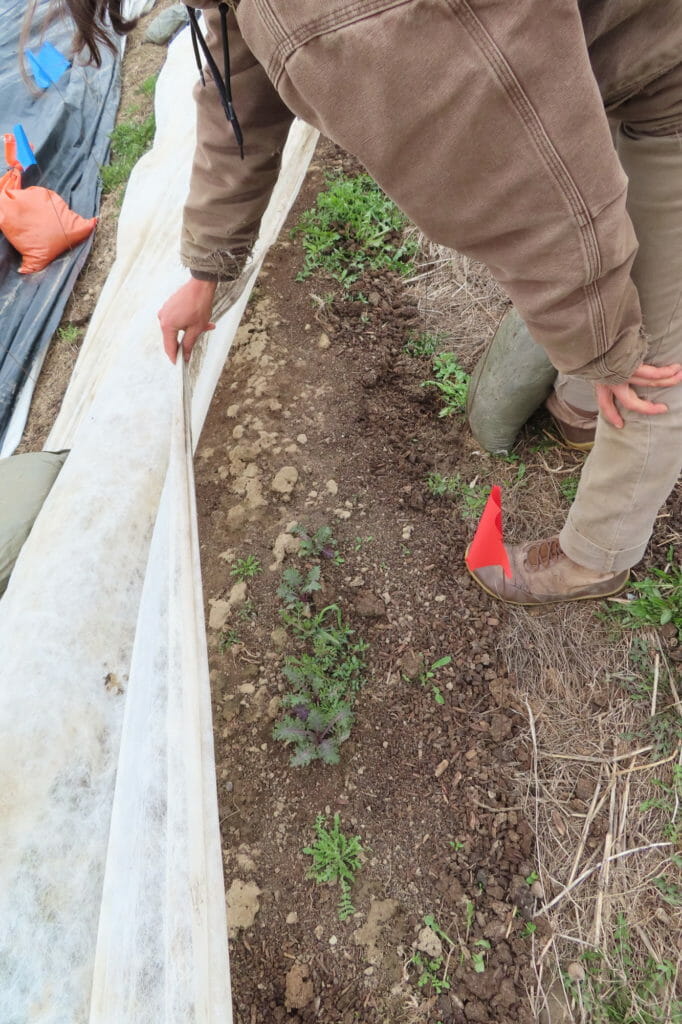 At Breckbill and Fagan’s, cilantro (var. Leisure) and kale (var. Red Russian) exhibited the greatest germination rates – 83% and 65%, respectively – while parsley exhibited 0% germination (Figure 1A). While germination rates were generally low, survival rates were abysmal. Only four of 16 varieties survived through winter, but their survival rates did not exceed 20%. Fagan offered several thoughts on why survival might have been low, saying “the plants might not have been big enough going into winter.” She wondered if a dry fall and no irrigation might somehow also have contributed to their lack of resiliency.

Yagla’s results were more favorable. For about half of the varieties he seeded, germination rates hovered at or above 75% (Figure 1B). All varieties had at least some plants survive, but Vit Mache and claytonia performed best with survival rates exceeding 70%. Parsley and all three kale varieties likewise performed well. 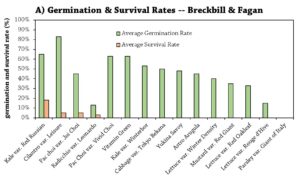 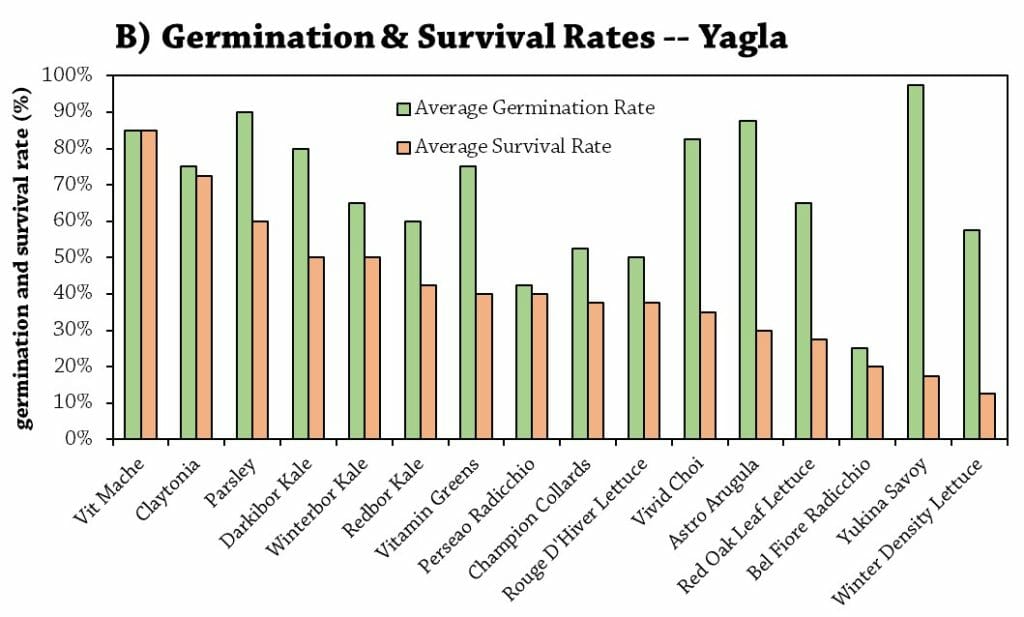 FIGURE 1. Germination and survival rates at (A) Hannah Breckbill and Emily Fagan’s farm, and (B) Jon Yagla’s farm.

While germination and survival rates provide valuable information, they are one part of a fuller picture. Yagla remarked, “There were some really good survival rates of over half, but the majority bolted pretty much immediately [in spring].” He offered the following observations in regard to bolting, flavor and ease of harvest:

Many valuable observations were made as a result of conducting this trial. Yagla, who saw greater success than Breckbill and Fagan, reflected, “I have a much better understanding of which greens are suitable for a fall seeding and early spring harvest. I will try fall seedings of claytonia and red oak leaf lettuce for early spring harvest in the future.” Fagan and Breckbill, who farm further north and on a windy bluff, commented, “I suspect a lot of these varieties would have survived winter with more care. For example, receiving more water initially and being planted in a high tunnel instead of the field.” Though uncertain, Breckbill and Fagan would consider trying some varieties again. They added, “We liked this trial because it gave us space to try varieties we might not try otherwise. It was nice to have the accountability and the flexibility to be adventurous on our farm!”

FIGURE A1. Example of experimental design used by Breckbill, Fagan and Yagla. 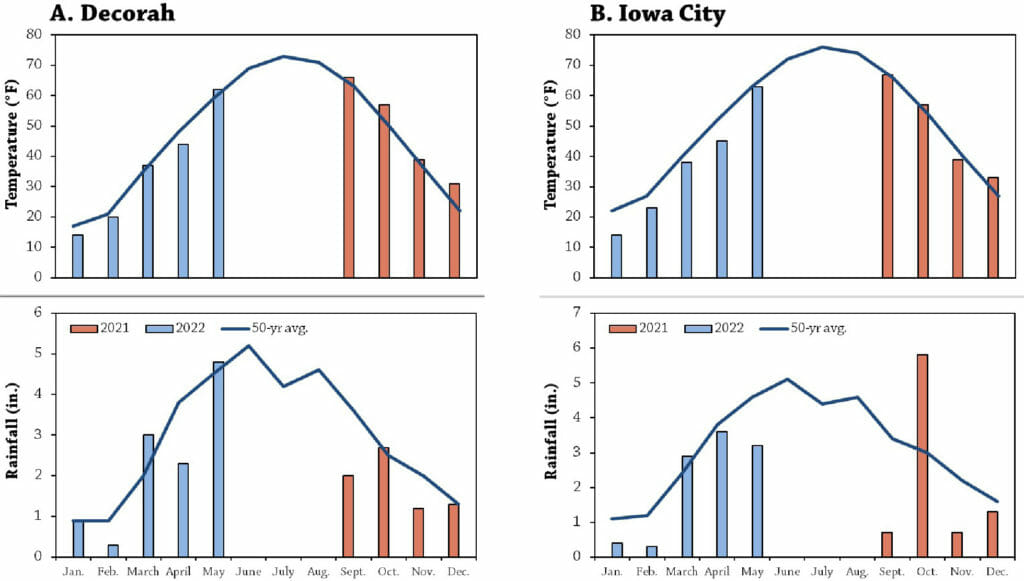 FIGURE A2. Mean monthly temperature and rainfall during the study period and the long-term averages at the nearest weather stations to Breckbill and Fagan (Decorah) and Yagla (Iowa City).[1]