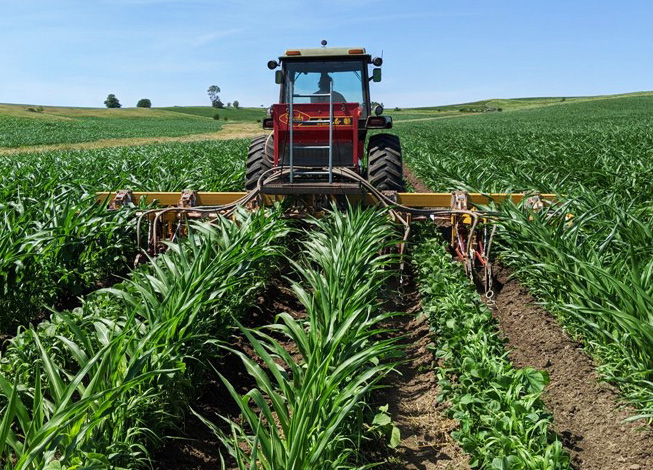 Soybeans growing in every third row of corn in the skip-row treatment at Vic Madsen’s during cultivation on June 25, 2020.

To test the effect on organic corn yields from planting soybeans instead of corn in every third row, Madsen compared two treatments:

Madsen implemented four replications of the two treatments (Figure A1). Strips measured 36 ft wide by 522 ft long. Field management is presented in Table 1. Corn and soybeans in the skip-row treatment were planted on the same date with the same planter pass. In the skip-row treatment, Madsen set his corn planter to 40,121 seeds/ac; skipping every third row resulted in a seed drop of 26,747 seeds/ac. 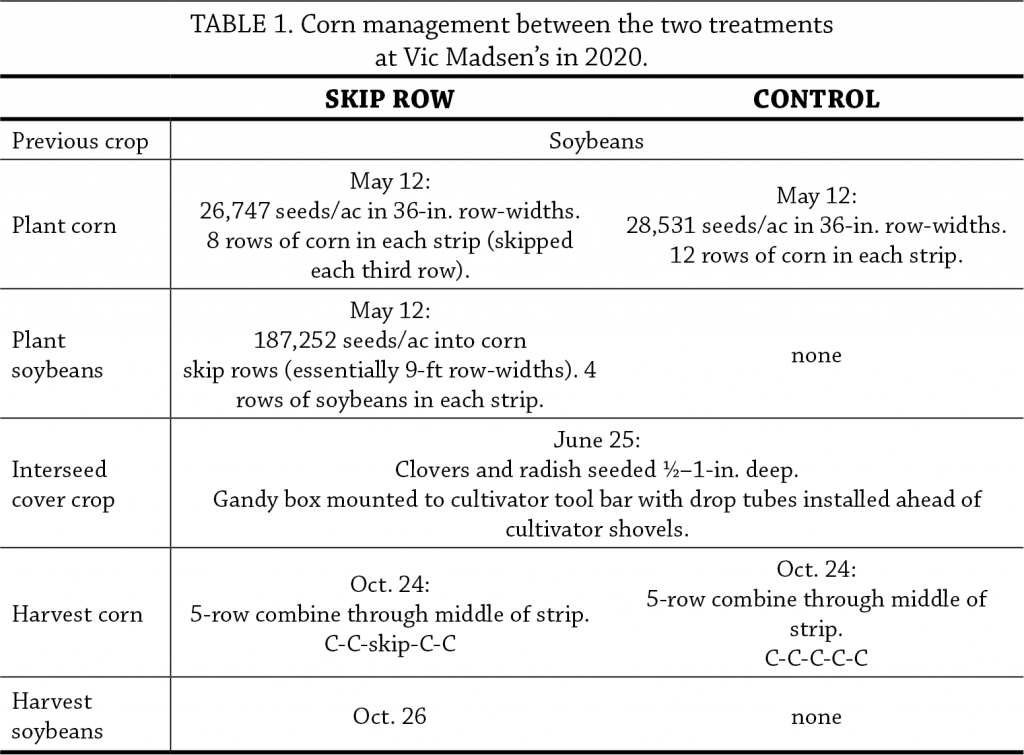 Madsen recorded corn yields and grain moisture from the middle five rows of each strip on Oct. 24. In the skip-row treatment, this resulted in four rows of corn harvested; two on either side of one soybean row. Soybeans from the skip-row treatment were bulk harvested on Oct. 26. Corn yields were corrected to 15.5% moisture; soybean yield was corrected to 13% moisture.

To evaluate the effect of the skip-row planting arrangement on corn yield, we calculated treatment averages and then used a t-test to compute the least significant difference (LSD) at the 95% confidence level. The difference between both treatment’s average corn yield is compared with the LSD. A difference greater than or equal to the LSD indicates the presence of a statistically significant treatment effect, meaning one treatment outperformed the other and Madsen can expect the same results to occur 95 out of 100 times under the same conditions. A difference smaller than the LSD indicates the difference is not statistically significant and the treatment had no effect.

Corn yields were significantly reduced in the skip-row treatment by nearly 30 bu/ac compared to the control (Figure 1). Moreover, Madsen observed no benefit of the cover crops interseeded in late June. “Sadly, we got no good out of the cover crop seed cost or effort. They germinated and emerged but quickly ran out of moisture and disappeared” (Figure A2). 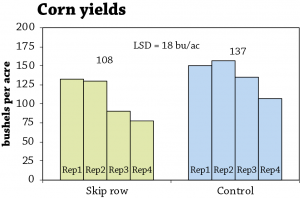 FIGURE 1. Organic corn yields at Vic Madsen’s, harvested on Oct. 24, 2020. Columns represent yields for each individual strip. Above each set of columns is the mean for both treatments. Because the average difference between the two treatments (29 bu/ac) was greater than the least significant difference (LSD = 18 bu/ac), we considered the treatments to be statistically different at the 95% confidence level. 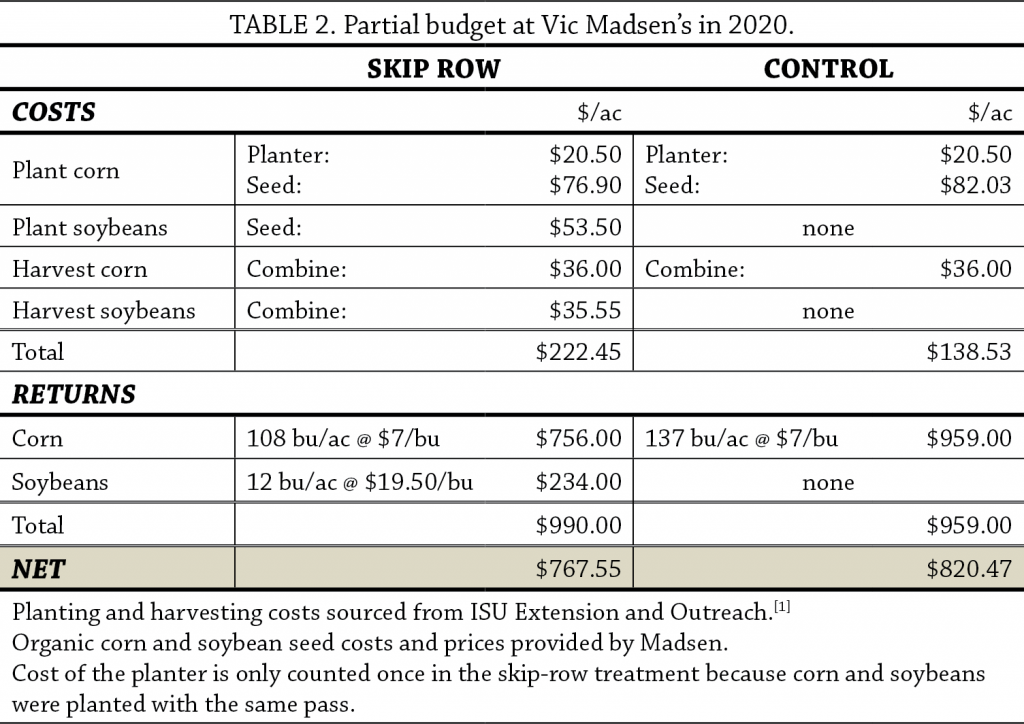 Madsen tried a companion planting of organic corn and soybeans in order to assess the economic viability of something he had been wondering about and, in his words, “to beautify our farm and produce a more attractive landscape.” Going into the experiment, Madsen figured he would be satisfied if he saw a 10 to 20% reduction in corn yield from the skip-row treatment; in the end, he observed a 21% yield reduction (Figure 1) and nearly $53/ac less in net returns (Table 2) from the skip-row treatment. If he were to try this practice again, Madsen would consider a shorter corn variety for letting more sunlight penetrate to the soybeans and use a shorter soybean variety that would be less prone to lodging in low-light conditions.

FIGURE A1. Vic Madsen’s experimental design. He implemented four replications of the two treatments (8 strips total). This design allowed for statistical analysis of the results. 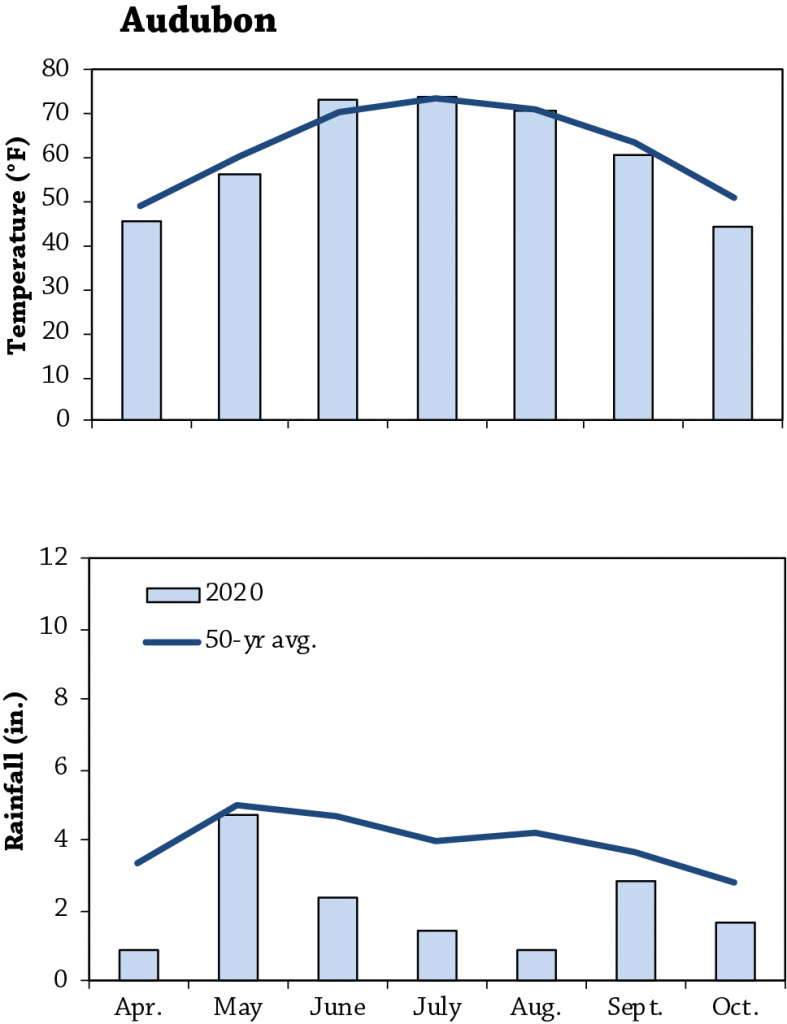 FIGURE A2. Mean monthly temperature and rainfall for Apr. 1 to Oct. 31, 2020 and the long-term averages at the nearby Audubon weather station.[2]