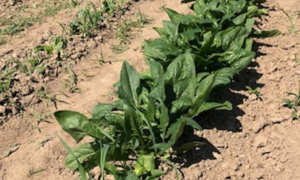 As a cool-season vegetable, spinach does best when planted late summer or fall.[1] Spring plantings can also be successful but have a tendency to ‘bolt’ (i.e. flower and set seed) as day length increases into summer, causing the leaves to become bitter in taste and unmarketable. Because of spinach’s popularity at farmers markets and in community supported agriculture (CSAs), farmers like Hannah Breckbill, Emily Fagan and Kate Edwards share an interest in prolonging its availability on their farms as long as possible through the summer. Conducting variety trials on their farms is a great way to determine which varieties are likely to bolt least and yield best. Along with Bonnie Riggan, Breckbill, Fagan and Edwards conducted spinach variety trials on their farms in 2020.[2] They found that the varieties Kolibri and Space generally yielded best and bolted least.

After having developed a greater understanding of which varieties perform best on their farms, Breckbill, Fagan and Edwards next set out on a mission to determine the optimal seeding rates and methods for their enterprises. Edwards typically seeds spinach at two times the recommended rate to compensate for the high clay content of soils at her farm and prefers hand-seeding to using a seeder for greater accuracy and predictability. She commented, “Calibrating mechanical seeders in horticulture is very imprecise. Unpredictable seeding rates results in under- or over-seeded spinach and inconsistent yields.” With hopes of substantiating their opinion that hand-seeding at the 2x rate is the best seeding method for their sites, Breckbill, Fagan, and Edwards designed an on-farm research trial to compare spinach yield and quality among three seeding methods: (1) Seeder 1x– one pass with a seeder at the recommended rate, (2) Seeder 2x – two passes with a seeder (double the recommended rate) and (3) Hand 2x – hand-seeded at two times the recommend rate. In addition to investigating seeding methods, Edwards also compared yield between two different varieties – one of the best yielding varieties from her 2020 variety trials (Kolibri) and a new variety – Kookaburra.

At the outset of the trial, Breckbill and Fagan remarked, “We are motivated to find more consistent success with spinach, which our customers will certainly appreciate.” Edwards added, “I’m looking forward to building connections with other PFI cooperators and staff as well as teaching my farm crew about on-farm research.” 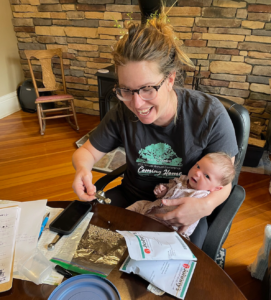 Breckbill, Fagan and Edwards established their trials in late April (Table 1) by direct-seeding spinach in each treatment according to their unique experiment designs (Figure A1). At Breckbill and Fagan’s, seeding method treatments were arranged in a randomized complete block design with one treatment assigned to each of three neighboring plots. They replicated each complete set of treatments four times for a total of 12 plots (3 seeding methods × 4 replications = 12 plots), and repeated the experiment by planting a second succession of spinach according to the same experiment design on May 4 (Table 1). Because Edwards assessed both seeding method (3 treatments) and variety (2 treatments), she used a split-plot experiment design. She assigned varieties to one of two neighboring plots, then divided each plot into three subplots to which seeding methods were assigned. Edwards replicated each subplot × plot combination four times for a total of 24 subplots (2 varieties × 3 seeding methods × 4 replications = 24 subplots). The random assignment and replication of treatments enabled us to statistically analyze their data.

At the time of harvesting spinach in each plot (Table 1), cooperators assessed plots for bolting and yellowing, which were scored on a qualitative scale of 0, 1, or 2 (0 = “none”, 1 = “some” and 2 = “much”) and were not statistically analyzed. Immediately after harvesting spinach, cooperators weighed spinach harvested from each plot.

To evaluate the effect on spinach yield of seeding method at Breckbill & Fagan’s and variety and seeding method at Edwards’, we calculated the average yield in each treatment or treatment combination then used Tukey’s tests to compute the least significant difference (LSD) at the 95% confidence level. If the difference in yield for any two treatments or treatment combinations was greater than or equal to the LSD, the treatments were considered to have a statistically significant effect on yield and the cooperator could expect the same results to occur 95 out of 100 times under the same conditions. Conversely, differences less than the LSD indicated the difference in yield was not statistically significant and the treatment had no effect. 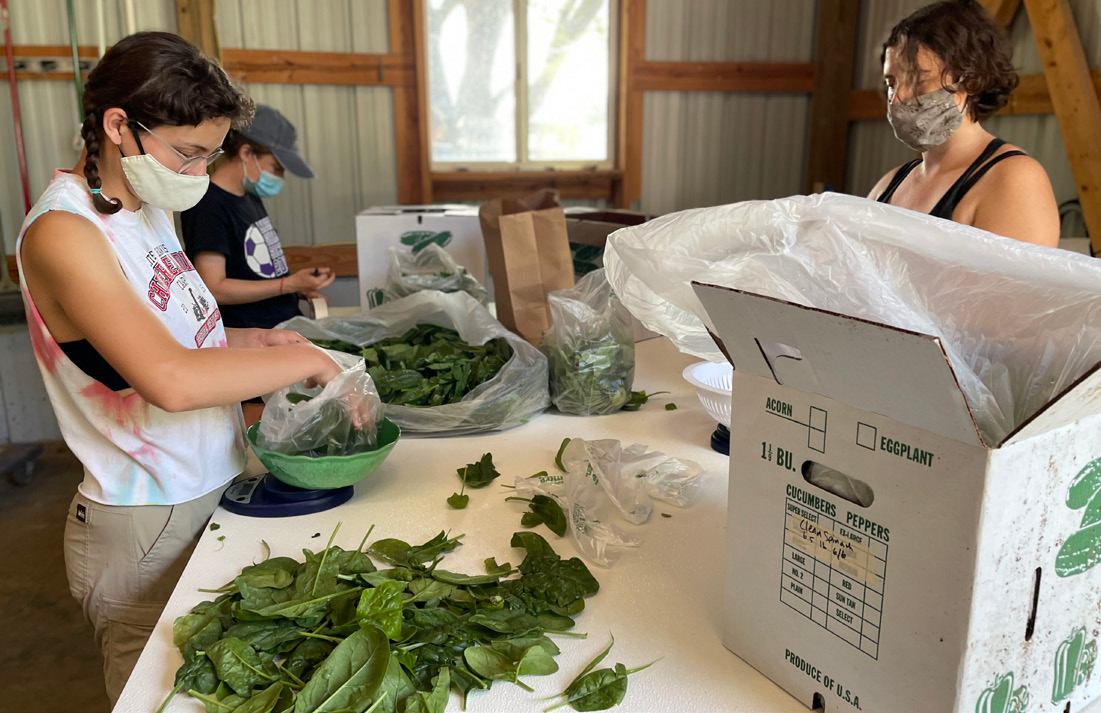 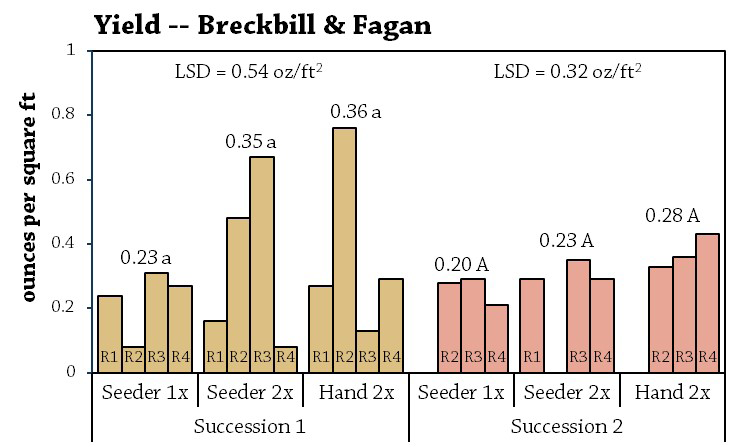 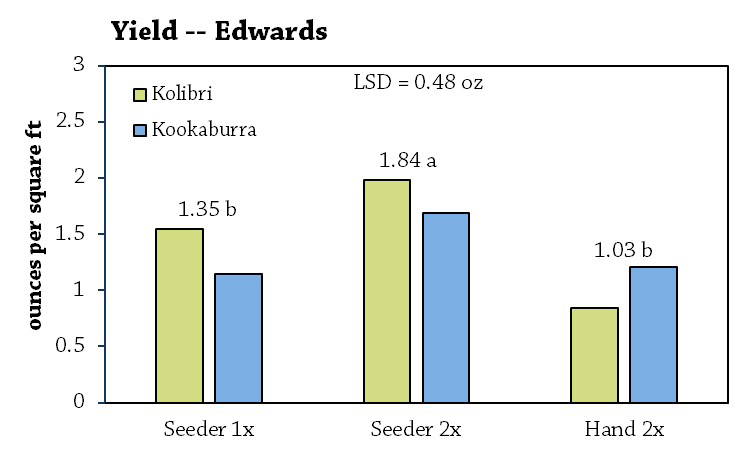 FIGURE 2. Spinach yield (oz/ft2) among seeding methods at Edwards’ farm in 2021. Individual columns represent the average yield of a variety within a given seeding method treatment. Numbers above paired columns represent the combined average yield of both varieties within a seeding method. For any two seeding methods, when the difference between their averages is less than the least significant difference (LSD = 0.48 oz), their yields are considered statistically similar at the 95% confidence level. When the difference in averages between two treatments is greater than or equal to the LSD, their yields are considered statistically different at the 95% confidence level.

Bolting and yellowing scores at Breckbill and Fagan’s tended to be greater in the second rather than first succession, which is consistent with their yield trend (Table 3, Figure 1). Slightly warmer than average temperatures along with lower than average rainfall during the second succession’s growth likely contributed to the uptick in bolting and yellowing (Figure A1). No clear pattern emerged for bolting or yellowing among seeding methods within either succession. Bolting scores were the same among treatments within each succession, but spinach seeded at the Seeder 1x rate resulted in less yellowing than spinach hand-seeded at the 2x rate in both successions. 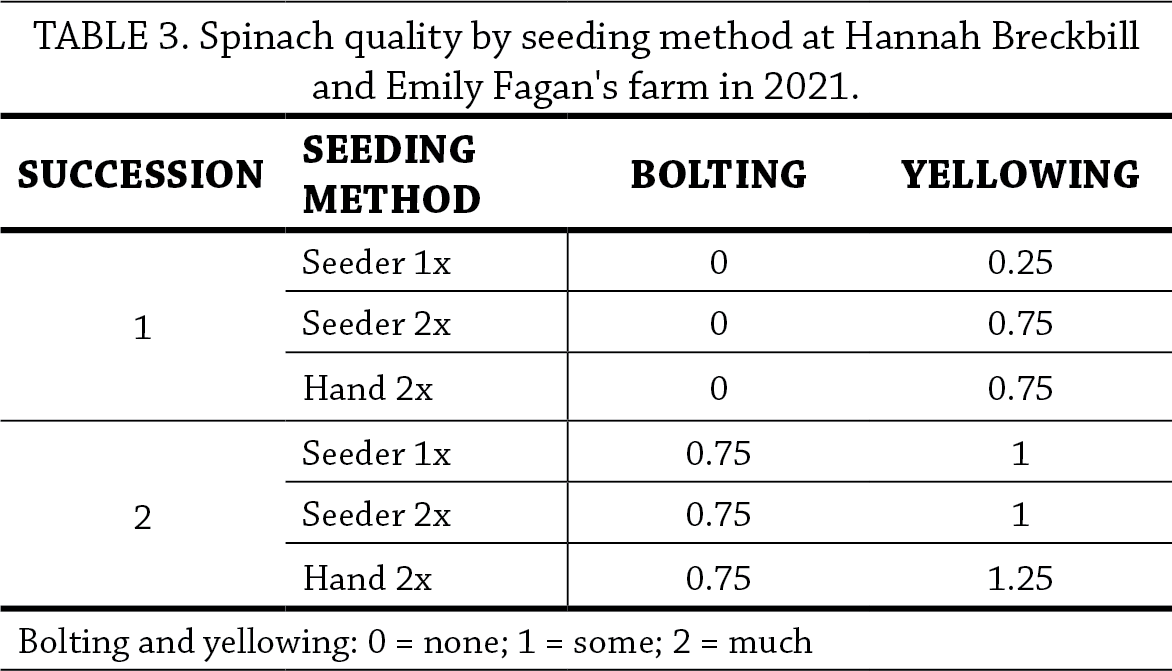 Contrary to their hypothesis that planting spinach with a seeder at the 1x rate would result in greater yield, Fagan and Breckbill experienced no yield differences among seeding methods in either succession while Edwards experienced the greatest yields using a seeder to plant spinach at the 2x rate. The Kookaburra and Kolibri varieties that Edwards additionally tested yielded similarly. It may be worth nothing that, while not statistically conclusive, hand-seeding spinach (2x rate) at Breckbill and Fagan’s resulted in numerically greater yields in both successions than spinach planted with a seeder at the same rate. Additionally, planting with a seeder at the 1x rate resulted in the lowest yields numerically. Fagan commented, “I do feel that seeding rate impacts how well our spinach yields, even though the data weren’t statistically conclusive. Using the seeder is a job I don’t like to do very much, so I’m not likely to choose to do it that way unless the data really tell me I should.”

Bolting and yellowing tended to occur more in the second rather than first succession at Breckbill and Fagan’s, as expected. And, as with their yield data, seeding method appeared to have no effect on bolting, regardless of the succession. At Edwards’ farm, the seeding method appeared to influence bolting while variety did not. Bolting occurred least when spinach was seeded with the seeder at the 1x rate. Interestingly, the pattern of yellowing scores at Edwards’ farm opposed the pattern of bolting – yellowing scores in the Seeder 1x method were greater than for the other seeding methods, and the Kolibri variety experienced more yellowing than Kookaburra.

FIGURE A1. Example of experimental designs used by Breckbill and Fagan (top) and Edwards (bottom), which included randomized replications of varieties and seeding methods. This design allowed for statistical analysis of the results. 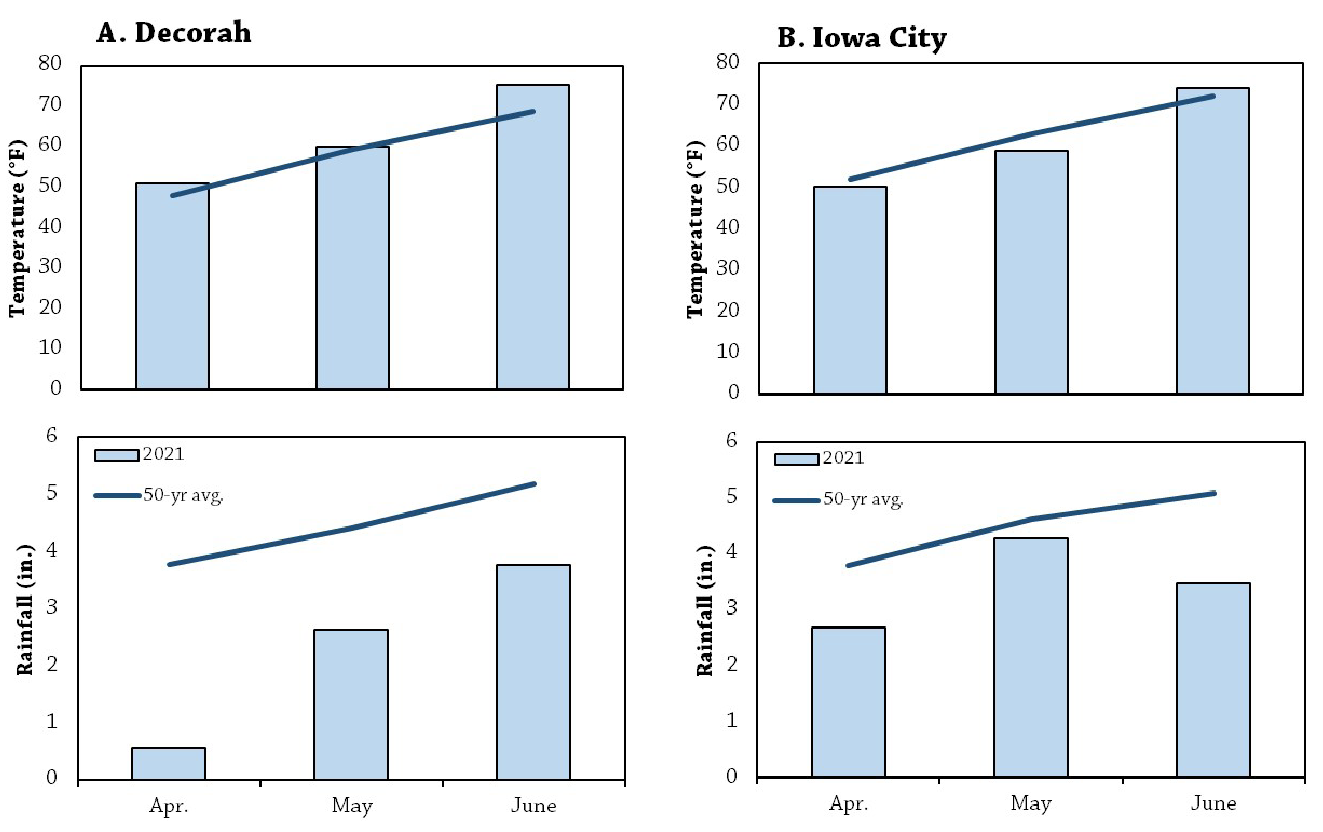 FIGURE A2. Mean monthly temperature and rainfall for during the study period and the long-term averages at the nearest weather stations to each farm.[3] A) Decorah (Breckbill and Fagan, about 10 miles away); B) Iowa City (Edwards, about 8 miles away).

Live from the Farm: New and Favorite Equipment in the Field and Pack Shed for Vegetables