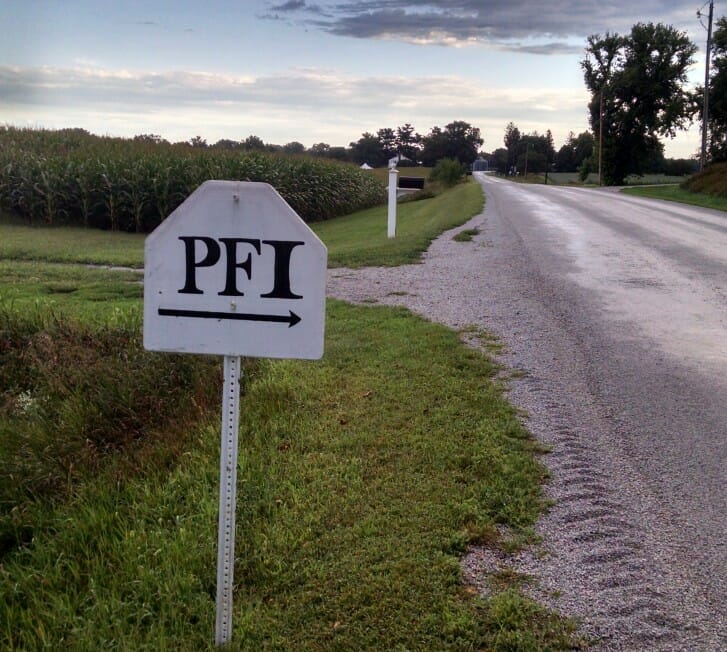 Jon, Tina, Bach, Nancy and Anderson Bakehouse welcomed close to 60 people to their farm to discuss crop rotations, cover crops, grazing and general soil health on August 26. Jon and Tina are the fifth generation to farm the land near Hastings, Iowa in Mills County on which Jon’s great-great grandfather first homesteaded. The underlying theme throughout the day was healthy soils produce healthy crops and healthy animals.

The day began with Jay Crom, a local independent crop consultant Jon works with, discussing the benefits of plant diversity on the farm—diversity in crop rotations and pasture/forage fields. Benefits a farm could recoup from plant diversity include disease and insect pressure suppression, reduced chemical inputs (and costs!), increased crop productivity, and better soil health in terms of microbiological activity. 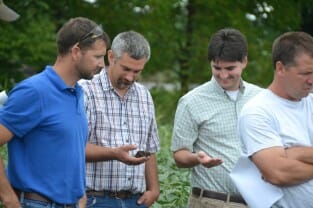 Attendees inspect the soil from the field that employs Jon’s “soil building” rotation.

We next moved out to the field that Jon currently has in the corn/soy/small grain+cover crop mix rotation. Jon had dug a four-foot deep soil pit in the field and Rick Bednarek, state soil scientist with the NRCS, led a discussion on the soil health benefits of using cover crops in a no-till cropping system like the one employed at Maple Edge Farm. But before we got out to the field, most folks were nervous that conditions would be pretty muddy and that the soil pit would be filled with water as the farm had received 0.73 inches of rain early that morning. However… the soil pit was NOT filled with water! This field that Jon has in his self-titled “soil building” rotation allowed all that rain water to infiltrate and those of us who walked into the field, and down into the soil pit, did not have much mud to shake off our boots. 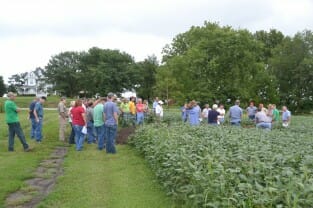 The crowd gathered ’round the soil pit as Jon and Rick Bednarek discussed the soil health benefits of crop rotations, cover crops and no-till. No muddy boots!

Rick explained the differences in crop rooting depth between cropping systems employing conventional tillage vs. those in no-till with cover crops and longer rotations. That same soil that permitted all that rainwater to infiltrate so quickly also allows Jon’s crops to send roots deep in the soil profile to access moisture and nutrients necessary for plant growth.

Jon was asked about his “soil-building” rotation with respect to labor and equipment. This field was chosen for this rotation, Jon explained, because it had been underperforming in recent years and he was looking at rebuilding productivity through plant and biological diversity. After soybeans are harvested, Jon drills a mix of rye and triticale that is chopped off the following summer. After the small grains, Jon seeds an 8-way mix of cover crop species that grows through the remainder of the year feeding the soil.  Chopping/harvesting and planting in July are not exactly the norm for row-croppers in this part of the Corn Belt.  Jon explained that he really enjoyed completing these field operations in July because it didn’t conflict with any other important tasks on the farm. Trying to complete all the planting in spring and all the harvesting in fall in a timely fashion can be a challenge so Jon’s cropping system results in a better distribution of labor across the year.

Maple Edge Farm is also currently conducting some on-farm research as part of Practical Farmers of Iowa’s Cooperators’ Program. Jon planted in paired strips normal- and early-maturing varieties of corn and soybean. The idea is that if they can harvest corn and soybeans a little earlier in the season that will allow more time for cover crops to get established before the winter freeze, thus recouping more potential benefits from the cover crops. An earlier cover crop planting date also opens up more possibilities in terms of which cover crops can be planted. The later one waits to plant a cover crop, the more limited the options become—cereal rye really becomes one’s only good choice once late October rolls around. Stay tuned for this research report in the years to come! 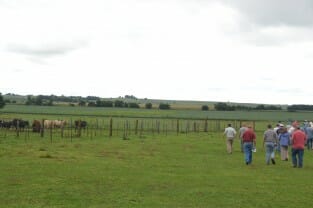 The group took a walk through the pasture and past the cattle on their way to the annual forage mix in the next field.

The day concluded with a stop in field Jon had seeded to an annual forage mix in May. Jon had grazed cattle in the field earlier this summer and was planning on bringing the cattle back through the field this fall after some re-growth. Colten Cotterton, of Green Cover Seeds in Bladen, NE, was on hand to discuss the mix he and Jon worked together on. Species in the mix included Brown MidRib (BMR) sorghum, BMR millet, sunflower, safflower, soybean, turnip, radish, collards and mung beans. Jon said that when he first let his cattle out on the mix they really enjoyed grazing it. In order to add some more tonnage to the field before bringing the cattle back out, Jon was considering broadcasting some rye and barley in the coming days. The forecasted rains and already decent soil moisture conditions should ensure good germination with a broadcast seeding of these cereal species. Jon mentioned that he was going to go with a similar mix in the field again next year before transitioning the field back into row-crop production the following year. As with the field in the “soil-building” rotation, Jon was looking to using diversity (plants AND animals!) to spur biological activity in the soil and improve crop productivity. 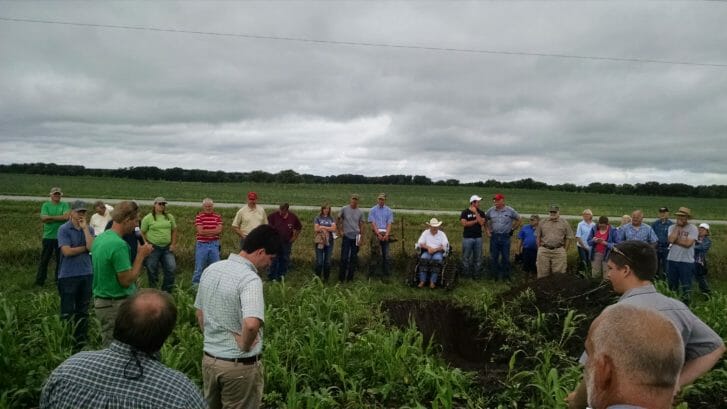 Jon (at left with microphone) addresses the crowd in the field that he seeded to an annual forage mix.

It was a great field day with a full slate of topics for discussion. Plenty of folks stuck around to enjoy lunch and talk more about crop diversity, cover crops and soil health. And the best part? The predicted thunderstorms held off and we enjoyed a beautiful, mild summer day in SW Iowa! 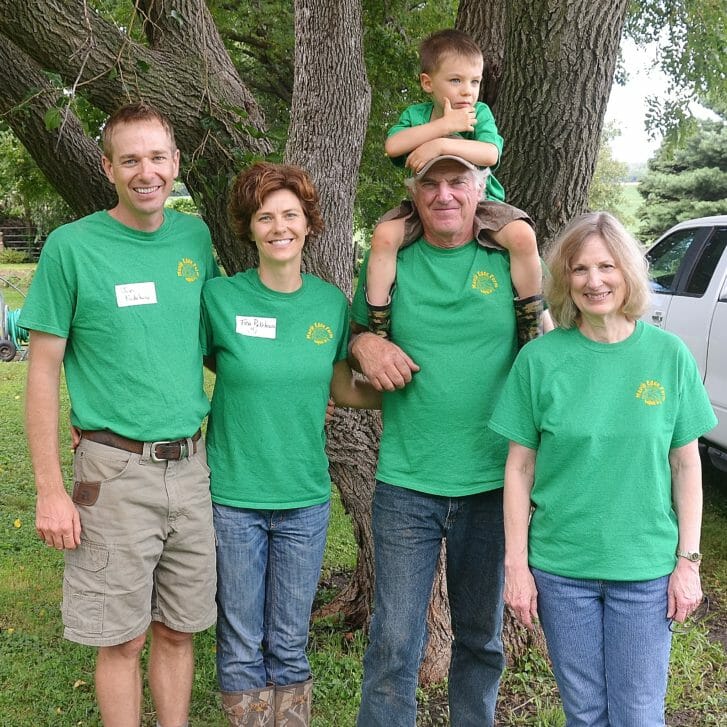