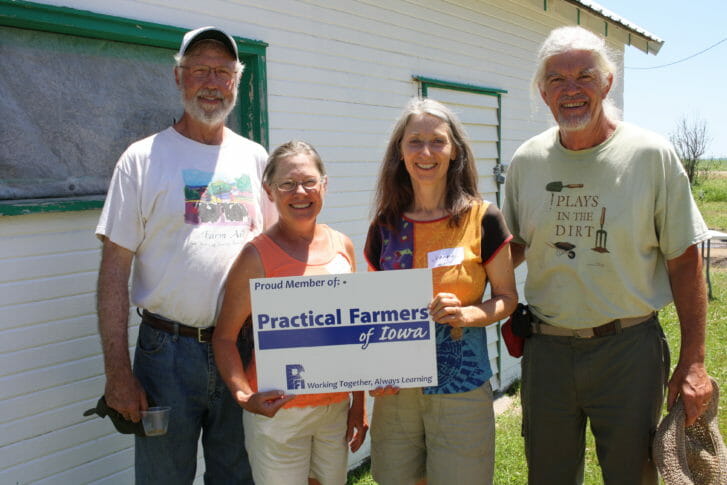 George Naylor, Patti Edwardson, Joanna Hunter and Billy Sammons rolled us into the 2016 field day season on June 15 near Churdan.

On June 15, Billy Sammons, George Naylor, Joanna Hunter and Patti Edwardson kicked off Practical Farmers’ 2016 field day season. They had 110 people attend near Churdan to learn about using a roller-crimper to terminate a cereal rye cover crop ahead of soybeans. Both couples are transitioning acres into organic production. By using a roller-crimper, they are attempting to incorporate both cover crops AND reduced tillage into their organic practices.

Roller-Crimper: Locally Designed and Made

This past winter, Billy and George had local manufacturer, Anthony Minnehan, make a roller-crimper after design specs provided by the Rodale Institute. They deviated from the original design just a bit by electing to use a “double chevron” blade configuration. Billy explained this was because they made the roller 16 feet wide and they were concerned that a single chevron blade on a roller that wide would not crimp the cover crop well enough. They also constructed the roller to be pulled behind a tractor on a three-point hitch. Some roller-crimpers are designed to be mounted on the front of a tractor so that you can roll a cover crop and plant a crop all in one pass. Billy mentioned that though this one-pass system might be appealing, he was concerned that mounting the roller on the front of the tractor would make it very difficult to turn in the field. We learned that the cost of roller-crimper manufacture was $5,000.

A cereal rye cover crop was seeded into standing corn last September at both Billy’s and George’s farms. They had a Hagie Highboy seed the cover crop at a rate of 2-3 bu/ac. This May, they drilled soybeans in 15-inch rows a couple of days prior to rolling the cover crop. On May 22, the rye cover was about 5-feet tall and seeds heads appeared to have 20% of their anthers emerged and shedding pollen. Billy explained that they would have liked anthesis to be a little further along but heavy rain was forecasted and they probably wouldn’t be able to get back into the field for a couple weeks as a result. They decided to drill soybeans and roll the rye that week. Because anthesis wasn’t too far along, Billy rolled the rye twice: once going north-south and then again going east-west across the field. He figured this would better terminate the rye at this not-quite-ready stage.

After 5-6 inches of rain a few days later, the soybeans began to emerge from the rolled rye. Some rye shoots began to pop up as well. It appeared that tillers and new basal shoots sprung from rye plants that were not completely terminated by the roller-crimper. Billy knew that having the rye 50% or more into anthesis (flowering) would be better for getting a good kill of the rye with the roller-crimper. “It would have been good to wait until the rye was further along and flowering more. From what I’ve read, that’s when researchers have found the rye cannot recover from being rolled and crimped. But we had to make the decision to roll given the heavy rains forecasted,” Billy said. “After that rain, those plants that weren’t fully killed tried with all their might to spring back to life. You could see where they had been crimped in 4-5 places with the blade, but they were still alive! We’re still learning about how to best use this technique.” 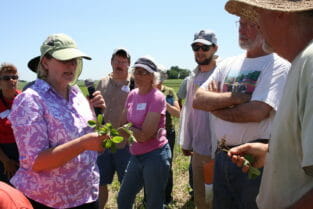 PFI member Margaret Smith discusses the developmental stage of the soybeans from the rolled area and tilled area.

The soybeans that were drilled into rolled rye at George’s were next to a field where soybeans were drilled six days earlier following rye that had been tilled in. PFI member and agronomist, Margaret Smith, noted that the soybeans in the tilled area were ahead in development by only about ½-stage, which is what you’d expect for soybeans planted six days apart. The thick, rolled rye didn’t seem to be stunting those soybeans. Last year, Margaret and her husband, Doug Alert, hosted a field day after they rolled a hairy vetch cover crop ahead of corn on their organic farm. Read more about that here: Evaluating a Cover Crop Terminator (and more!) at Ash Grove Farm.

By the time of this field day, Billy and George had had the cereal rye cover crop seeded and rolled and the soybeans drilled. In order to give those in attendance an idea of all that happened prior to the day, Billy presented a slide show of photos and important dates of operations from the past few months. Billy’s presentation of that timeline and photos can be viewed here: 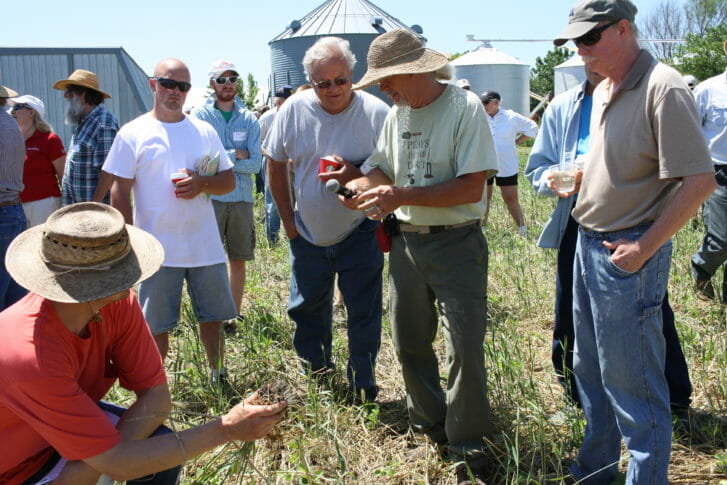 Billy leads a discussion in the field where the soybeans were drilled and the rye was rolled.

A few days after their field day, Billy decided to mow the rye that had re-sprouted and persisted in the soybeans. He got the idea to mow above the small soybeans from people who attended the field day! “I figure we added maybe a ton of biomass to the earth floor and most of the tillers were in anthesis so are not likely to grow back,” Billy wrote. 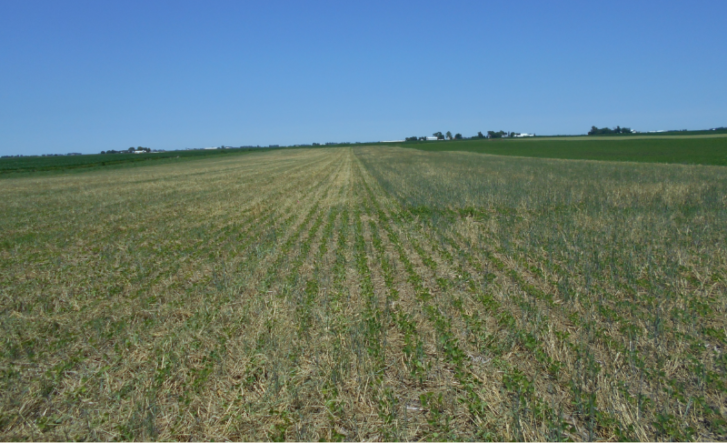 Mowed portion of the soybean field on the left. After mowing the entire field, Billy observed, “It really does look good now…kinda thinned out the stand a bit with the tractor wheels, but I suppose that’s part of the reason for a higher population in the beginning. Weed pressure is nil and we will watch closely.” Photo taken on June 20, 2016. 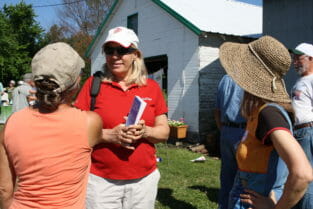 Dr. Kathleen Delate (professor/extension organic ag specialist from ISU) was on hand to share results and observations from her team’s years of research investigating the roller-crimper’s use in organic cropping systems. Her team has been looking at rolling cover crops ahead of both soybeans and corn since 2005 when they first started working on organic no-till at the Neely-Kinyon Research Farm in Greenfield, Iowa in Adair County. Kathleen says that weed control and yields of organic no-till soybeans have been on par with organic soybeans managed with tillage. With corn, however, things haven’t gone as well. You can learn more about Kathleen’s work on organic no-till in Iowa at the links below: 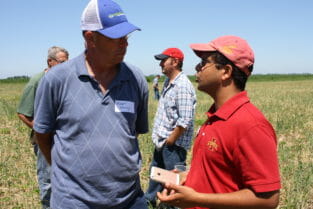 Dr. Ajay Nair also presented recent work he and his graduate students have conducted on using a roller-crimper to terminate cereal rye ahead of vegetable crops. As far as termination with the roller-crimper is concerned, Ajay stressed the importance of waiting until approximately 50% of the rye seed head is displaying anthers and shedding pollen. He says that waiting longer into pollen-shed and grain development is fine, too; rolling any earlier, though, probably won’t sufficiently kill the cover crop. Benefits his team has observed are milder soil temperatures and lower weed pressure thanks to the rolled cover crop mulch. Ajay’s presentation from the field day can be viewed below:

The field day concluded with a meal provided by local chefs Tony Pille and Chris Place. They prepared a meal featuring greens they grew and lamb from Cory Family Farm (PFI members in Polk County). Served on homemade flatbread, the meal had attendees proclaiming “best food at a PFI field day EVER!” 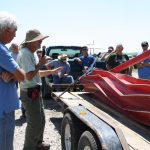