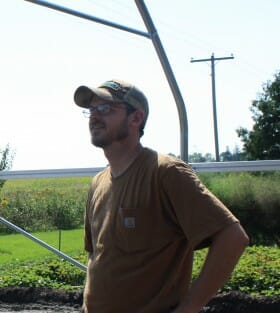 Josh Nelson farms near Belmond with his father, two uncles and a cousin, growing corn, soybeans and pigs on the family’s main farm. Each family member rents or owns land individually, Josh explains, but “we all work jointly and own the equipment together.”

“This is my fifth year farming with them,” he adds. “Prior to that, I spent nearly a decade working as a journalist.”

Josh, the sixth generation to farm the family’s land, also independently operates Cardinal Prairie Farm on a portion of the land he rents, where he raises chemical-free produce on more than a half-acre – though he hopes to “slowly expand to a few acres” in the next few years. He also has a small herd of Highland cattle.

“The vegetable operation is chemical-free, which means I treat it as essentially organic once the plants sprout,” Josh says.

While he says he doesn’t have plans to become certified organic at the moment, he uses a variety of production practices to promote plant and soil health, including crop rotations; companion plantings to reduce disease pressure and improve plant vigor; cover crops to improve soil; and composting for fertility.

Josh markets his products through North Iowa Fresh, an aggregator and marketer of locally grown and produced food. He also sells at area farmers’ markets and directly to restaurants in the Wright County area.

He and his wife, Kate, have two children – Will (Kaiser Wilbur) and Lilly, born last year. Outside of farming, Josh sits on the boards of directors for Healthy Harvest of North Iowa and North Iowa Fresh. He is also active in the Wright County Farm Bureau and the Iowa Soybean Association.

“I joined PFI originally to learn more about cover crops and controlling nutrient runoff on my fields,” Josh says. “Other articles in the quarterly newsletter got me thinking about how I could diversify my farm income, which led me to start the produce operation.”

He praises the high tunnel build organized by Practical Farmers, and hosted by Sara and Bob Pearson of Prairie Sky Farm in September 2015, as “probably the best PFI event I have attended.” Read more about that event in this blog post, this photo blog and the horticulture article in the Autumn 2015 issue of our quarterly newsletter (flip to page 4).