This is Paul Mugge’s small grain of choice. He raises variety NE4236GT organically for Albert Lea Seed on his farm in O’Brien County. He plants triticale with a no-till drill on the day after soybean harvest. “My ideal scenario is to finish planting triticale by October 10 – it doesn’t look like that’ll happen this year because it’s so wet. But last year I didn’t get it into the field until the end of October and I had a great stand because the fall was so long and warm.” 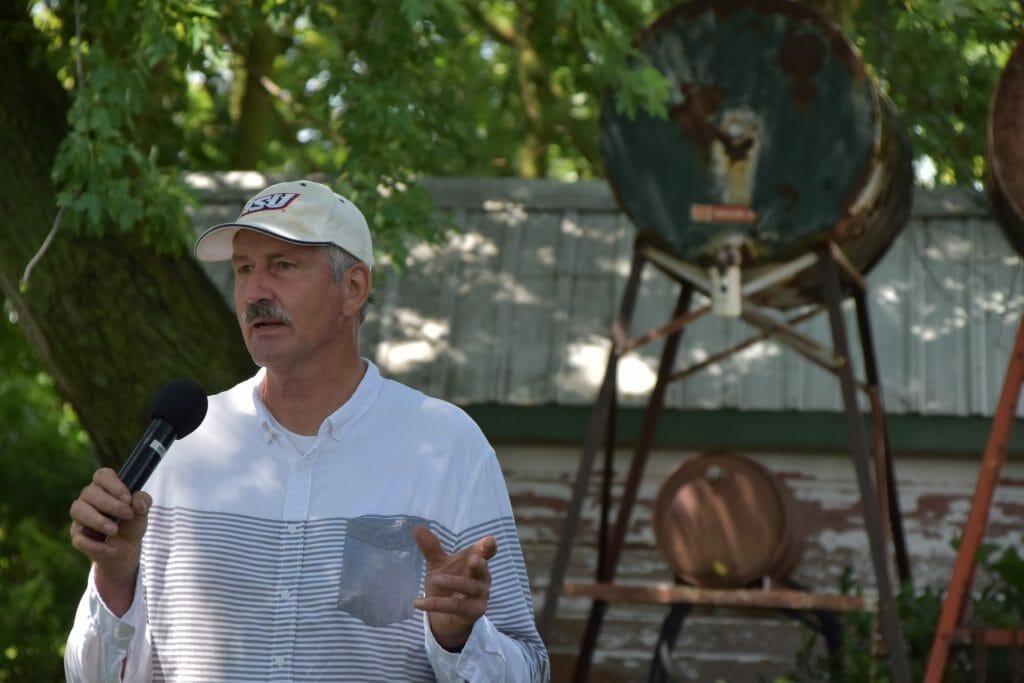 Paul Mugge has over a decade of experience growing winter triticale.

Because Paul farms organically he has big ridges in his soybeans from cultivation. So when he goes to set up his planter for triticale he adjusts some of his coulters shallower so his drill follows the contour of the ridges. He plants about 100-110 pound/acre of triticale. In his triticale seeding rate trial in 2016 he found no significant difference between an 85 lb/acre and a 135 lb/acre seeding rate, so he’s not too careful about getting a precise plant population. Triticale has a more consistent seed size than other small grains so going by lbs/acre is fairly consistent and works for his operation.

In April, Paul goes out into the field and broadcasts red clover into the triticale. “I don’t do any primary tillage on my farm so I use red clover because it winter kills,” Paul says. “The clover stays about 6 inches tall until I harvest triticale standing, like wheat. By Labor Day the clover is in full bloom. After that I clip it so that the weeds don’t go to seed, but because it bloomed I got the nitrogen fixing out of the clover.”

In Paul’s organic system,  all of his nitrogen goes on before corn (i.e. after small grains) as manure and N from clover. “I am hesitant to put on manure ahead of small grains because of potential weed issues,” he says. “I get 60-70 bushel triticale as it stands without any additional fertilizer.” And that’s nothing to turn your nose up at.

Dick Sloan started growing rye for small grain seed and a “resource saving crop” in 2012. He’s been farming since 1978 in Buchanan County in northeast Iowa, and liked the idea of rye in his rotation to displace fertilizer needs. 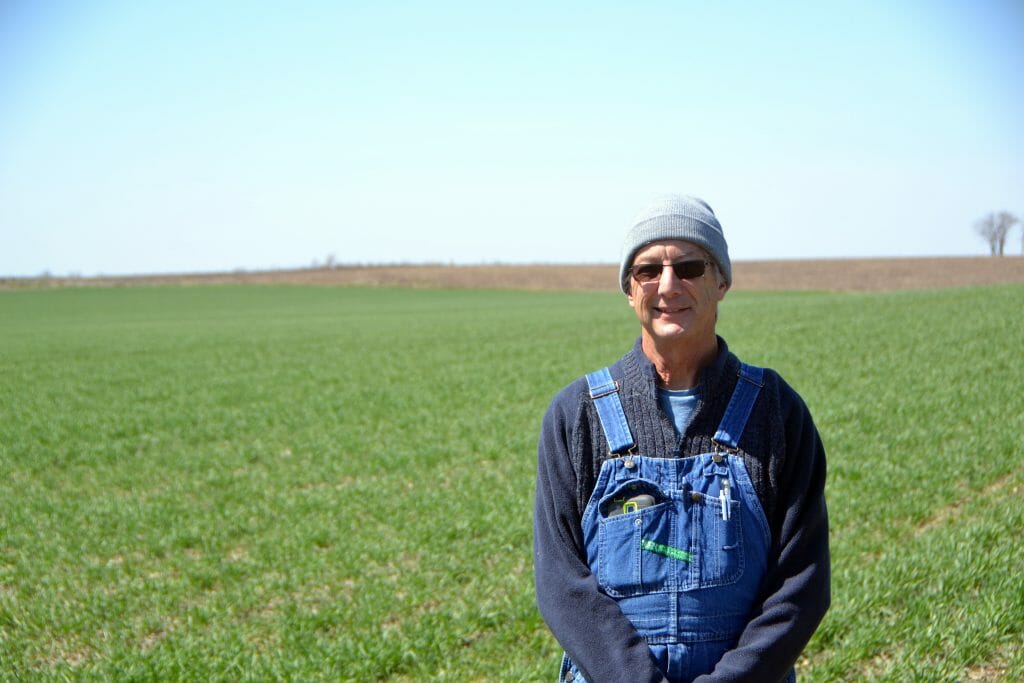 Dick Sloan stands in front of a green field of winter wheat in April. He has grown winter rye, wheat and barley on his farm for his own cover crop seed.

Like Paul, Dick no-till drills rye right after soybeans. He selects a maturity group 2 soybean to make sure he can get into the field to plant his rye and barley in early October. He cautions farmers to pay attention to whether the combine is catching residue and dropping it off the back – these clumps of residue can prevent seed from reaching the soil and result in an uneven stand of rye (or any other small grain). Staying alert and catching problems as they happen can save you from having to go back address residue clumps over a whole field later. He sets his drill for a seed depth of ¾ to 1 ½ inches.

Dick’s goal is to establish 25-35 healthy plants per square foot – or about 1.3 million seeds per acre. With a more variable sized seed like rye and the fact that he grows his own seed so there’s no label count for seeds per pound, he goes to the trouble of counting and weighing his seed and calibrating his seed box by this count each year. With an open pollinated or VNS rye this seeding rate is usually in the neighborhood of 100 lbs per acre. A great resource on calibrating drills for small grains planting is this episode of Rotationally Raised, our small grains series on Youtube, which walks through the whole process step by step:

Through trial and error Dick has landed on a fertilizer plan of two applications – one in the fall and one in the spring. In the fall he applies 15-26-60-12 of N-P-K-S respectively, with the N coming from ammonium sulfate. Then in the spring applies a 30-20-30 mix of potash and MAP in the spring before stem elongation.

“One year I went out and planted winter barley,” Dick says. “Then I come to find out that they say you’re not supposed to plant winter barley north of a certain highway in Missouri – but I haven’t had too bad of luck with it. I’m still looking for good varieties that will overwinter more consistently, though.” Barley is the earliest small grain to harvest, a couple weeks ahead of wheat, and then a couple weeks after that rye comes out of the field.

His fertility program for the barley (and his wheat) is the same as the rye fertility program, except that he cranks up the N in the spring by 15 lbs. So his spring N application is 45 lbs instead of 30, while the P and K stay the same as the rye. This is because the barley and wheat are shorter plants that improve yield with more nitrogen without the lodging problems that the taller rye plant experiences. This is a double edged sword. Barley’s short stature makes it easy to harvest and unlikely to lodge, but you don’t get the same carbon out of it because it has so much less biomass than a rye crop would.

Shared learning calls are monthly opportunities for farmers to hear experts and experienced farmers and share challenges and successes with their peers who are raising small grains. If you’d like to receive details for our next shared learning call contact alisha@practicalfarmers.org.