Our second spring field day as part of our 2018 Cover Crop Caravan series was hosted by Josh Nelson and Austin Charlson on March 28 in Clarion. Our plan was to have lunch in town and then head to Josh’s and Austin’s fields but an early spring snowstorm left 8-10 inches of snow on the ground in this part of north-central Iowa and kept us inside. Despite this, Josh and Austin shared with the group how they’re making cover crops work on their farms and we also heard from Doug Adams and Patrick Chase from the NRCS on the benefits of cover crops and reduced tillage for the soil. 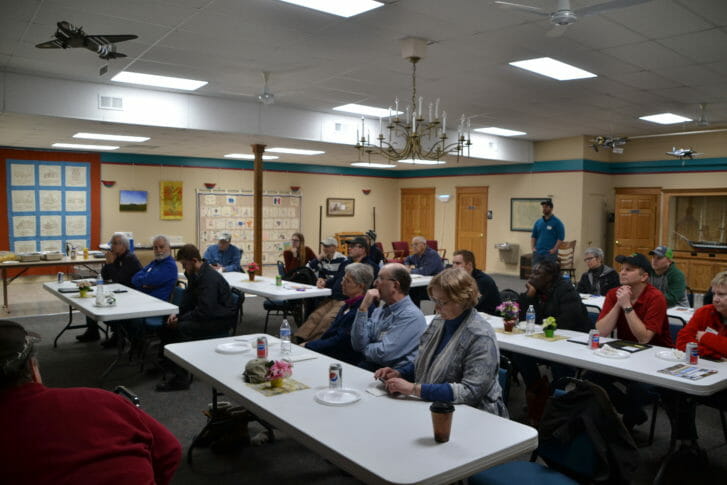 Snow on the ground kept us indoors, but attendees learned plenty from the cover crop experiences shared by Josh Nelson, Austin Charlson and Doug Adams.

Austin kicked off the presentations by admitting to the group that he was “just tipping my toe into the water” when it comes to using cover crops in his corn-soybean system. As he’s been gaining experience using cover crops the past 2-3 years, Austin cited both Practical Farmers of Iowa and Corn and Soybean Digest as his two primary resources for finding information on cover crops. He recalled seeding a cereal rye cover crop after corn one fall and receiving a 9-inch rainfall that evening. All that water washed some of that newly broadcast seed into concentrated areas and also left some gap areas. The next spring, the cereal rye was very thick where the rainwater had concentrated the seed. As the year went on, Austin noted how that thick rye prevented any weeds from poking through (obviously, this was not the case where there were gaps in the rye stand). He waited until the rye was 4-5-feet-tall to terminate the cover crop and plant his soybeans in 15-inch rows. One of the big benefits that resulted from this was that, come fall, the combine skimmed across that field (and the leftover rye mulch) extremely smoothly. “We often have to roll our soybean fields here to avoid rocks when combining so close to the ground,” Austin said, “but we didn’t have to roll that field because of the cover crop.” 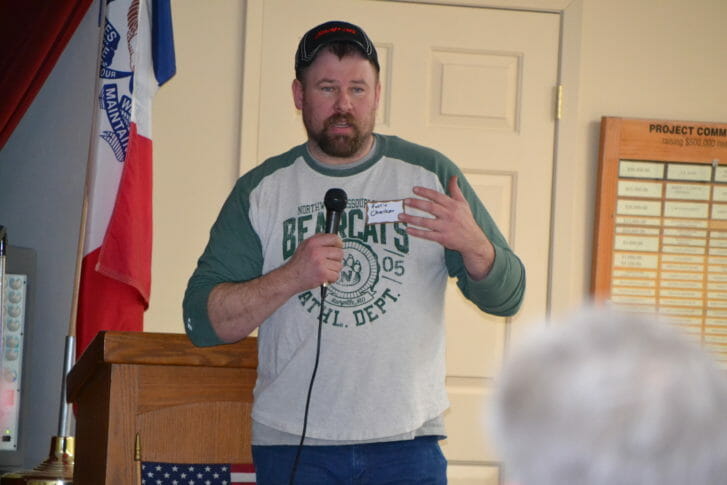 Austin Charlson has been impressed with how a lot of cover crop growth ahead of a soybean crop can reduce weed pressure. “I’m going to try to make cover crops work as long as I can.”

Josh Nelson has been using cover crops since 2015. His reasons for using cover crops include improving soil quality along with reduced tillage and hog manure and also because many of his fields are surrounded by environmentally sensitive areas like rivers, marshes and lakes. Josh mentioned that he typically has cover crops flown onto his fields with an airplane service in late August. This technique can result in a reliable fall cover crop stand if the seed can catch a rain shortly after being aerially applied. For the most part, Josh has been using cereal rye as a cover crop and seeding at a rate of 60 lb/ac. In the future, Josh is curious about mixing in rapeseed with the cereal rye in an effort to increase the diversity of plant life in his fields. 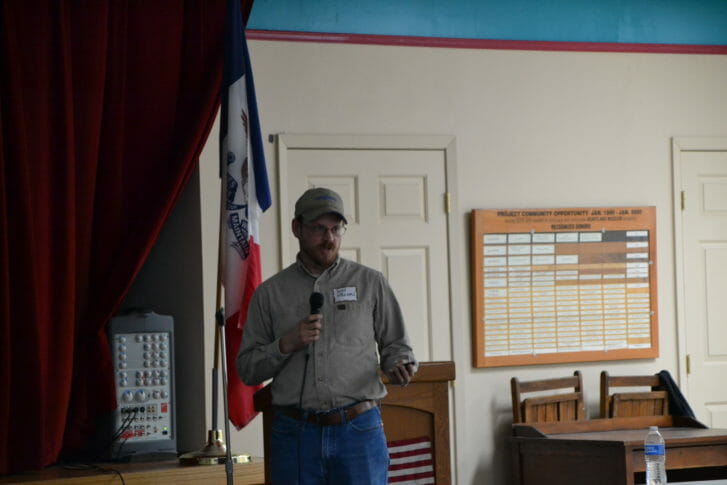 Josh Nelson uses cover crops on his corn and soybean acres to improve soil and water quality. “Make sure you develop a plan for management before planting cover crops.”

Come spring, Josh monitors his cover crop growth and the nighttime temperatures in order to decide when to terminate the cover crop. He cited a rule-of-thumb his friend, and fellow Practical Farmer member, Michael Jackson uses when determining when a cover crop can be successfully terminated with glyphosate: “You know the cover crop is growing and can be killed if you’ve already mowed your lawn once.” Waiting for a few nights in a row with temperatures just around 50 degrees Fahrenheit is also something Josh abides by. “Cool temperatures after spraying the cereal rye has resulted in an inconsistent kill and can lead to headaches later on,” Josh said. Because of this, Josh typically is terminating his cover crops in late April in north-central Iowa. With this, he’ll usually be planting his corn and soybeans in early to mid-May.

When it comes to planting corn or soybeans following a cover crop, Josh explained that depth control and well-maintained disc openers are essential for properly placing the seed into the soil.

Doug Adams, farmer and NRCS soil conservation technician for Humboldt County, explained how incorporating cover crops and reducing tillage can be successful for corn and soybean production in north-central Iowa. This is particularly true for a soybean crop, Doug said. For the past few years, Doug has eliminated tillage and reduced herbicide use thanks to a cereal rye cover crop. Seeding his soybeans into 55-inch-tall rye and then spraying the rye and rolling the rye is how he’s reduced herbicide (he only needs to spray the rye but not spray for weeds later in the season). Laying down all that rye plant matter results in an extremely effective mulch that suppresses weed growth but allows the soybeans to emerge and thrive. That can certainly reduce your crop production costs! So can substituting tillage with cover crops (see Doug’s comparison below). 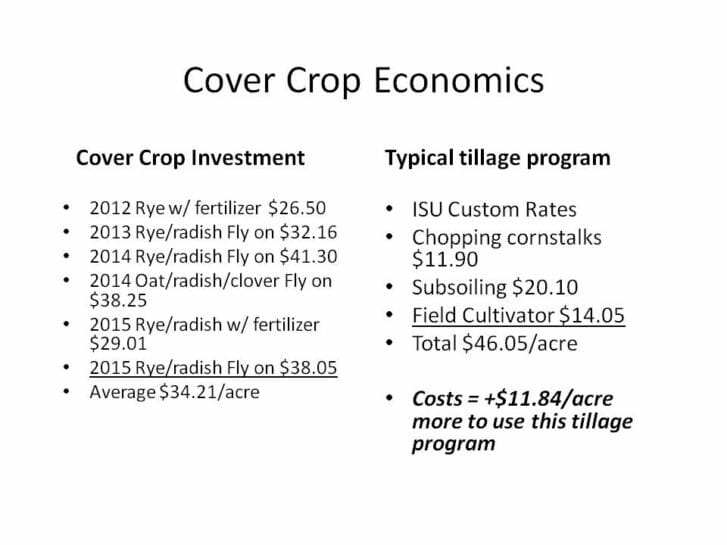 Doug Adams compared his cover crop costs from the past few years with the costs associated with a typical tillage program in north-central Iowa. 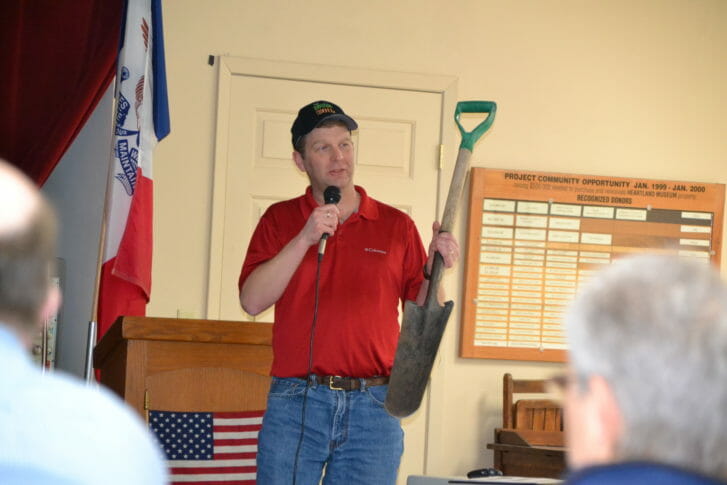 We weren’t able to make it out to the field because of the snowcover, but Patrick Chase, NRCS area resource soil scientist for north-central Iowa, performed two vivid soil health demonstrations. 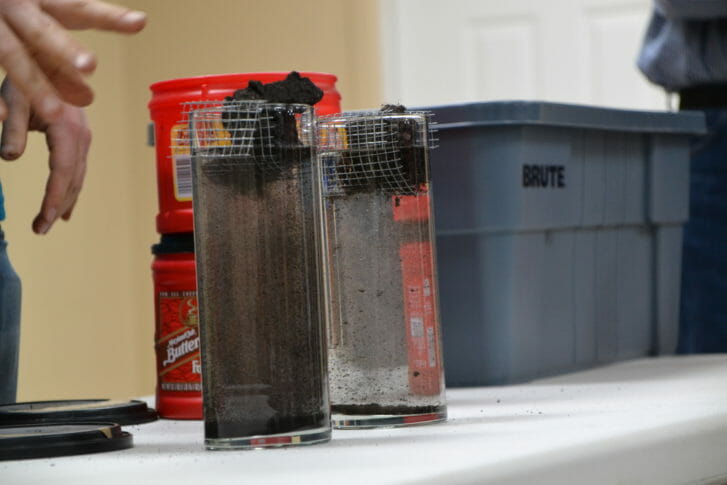 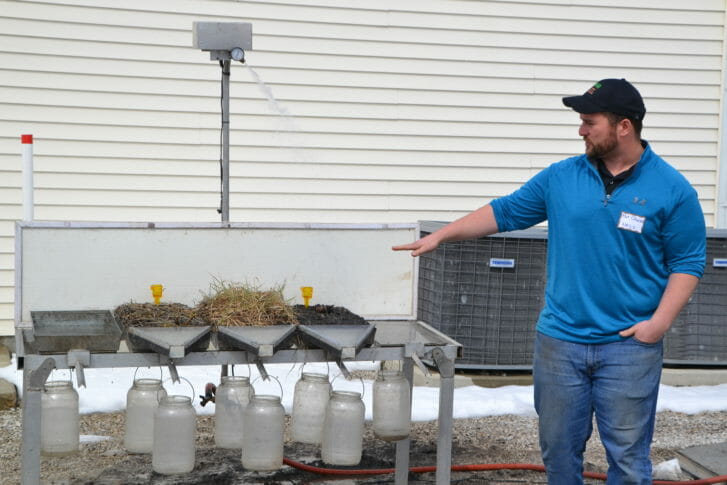 Patrick Chase ran the rainfall simulator. On the left is soil from a field with cover crop. In the middle is from a cereal rye grain crop. On the right, soil from a conventionally tilled field with no cover crop. 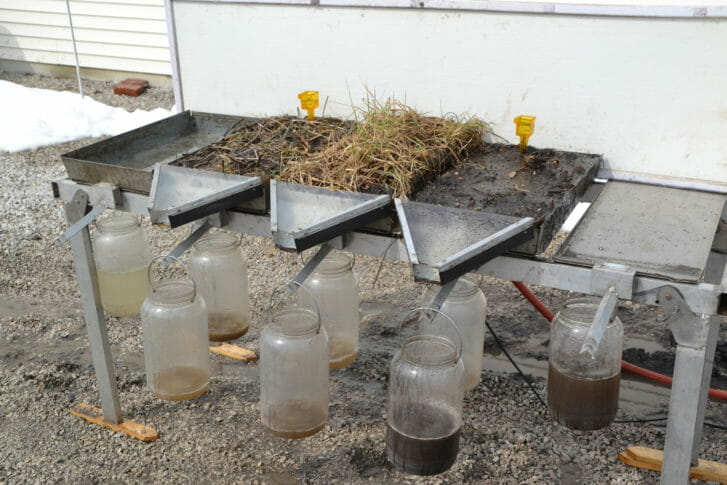 After 1 minute of simulated rainfall, you can get an idea of how much runoff (front jars) and infiltration (back jars) occurs. Notice all that runoff with no cover crop! 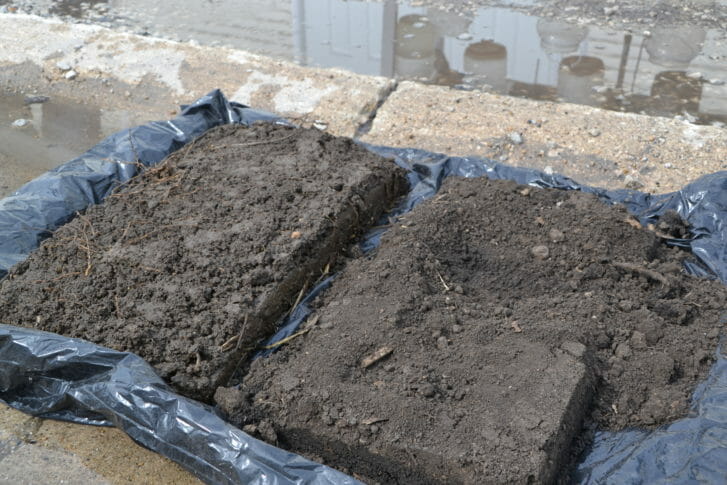