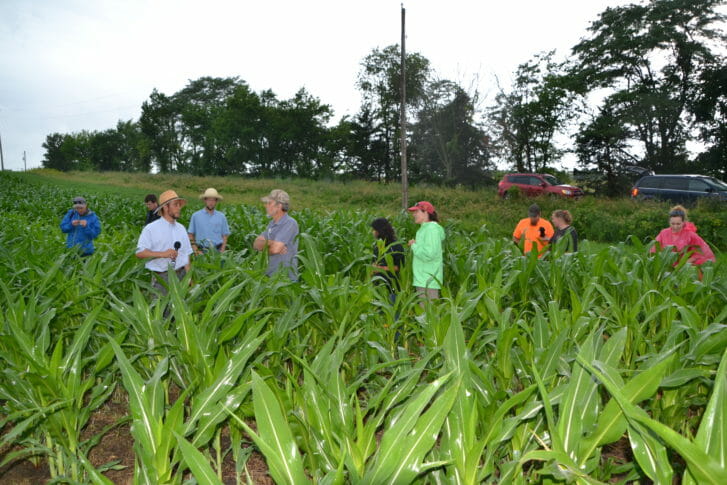 Arlyn Kauffman leading field day attendees on a tour of a corn field that is following a wheat and triticale cover crop.

“I joined Practical Farmers of Iowa because I needed a support network and people to go to in order to learn about better soil management and conservation practices,” said Arlyn Kauffman as he kicked off his field day on June 19 near Weldon in south-central Iowa. “Practical Farmers is a resource group to learn from. I glean ideas from other farmers on how to do better on our farm.”

Arlyn, and his wife Sue, held the field day in full participation of the PFI tradition to share knowledge, inspire curiosity and instigate change. “When I first started farming on my own a few years ago, I saw the soybeans do really well where the fencerow used to be,” Arlyn told the group. “I wondered: Why can’t the whole farm look like that?” Enter cover crops.

The Kauffmans first started using cover crops to stem soil erosion. Arlyn recalled the time he was riding in an airplane near Des Moines and witnessed from above the “chocolate milk” running from the fields into the rivers and stream. Cover crops, like cereal rye, have long been proven to reduce soil erosion that can occur from bare surfaces following the harvest of corn and soybeans in the fall and prior to any planting of corn or soybeans in the spring. As the Kauffmans began covering up those bare surfaces, they too saw a reduction in soil erosion. “Not too long after joining PFI five years ago, I began to learn about the importance of growing diverse plants – how that was important for resilience,” Arlyn said. 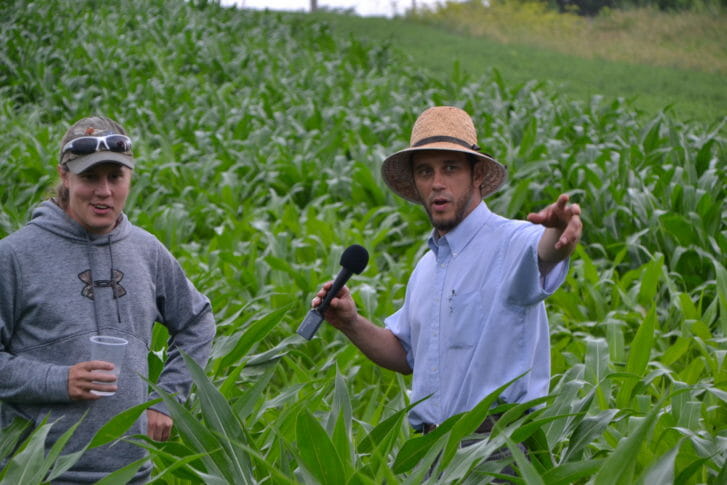 Arlyn and fellow PFI member Sam Bennett. Arlyn credits PFI with helping him to find other farmers he can share ideas with and learn from.

Cover Crops a Gateway to Diversity

The Kauffmans farm 250 acres and have incorporated cover crops as a routine practice (their goal is for cover crops on 100% of their acres). In the past few years, they’ve been adding small grains into their crop rotation that includes corn, soybeans and alfalfa. “Seeing the cover crops growing out there in the spring, I thought, ‘Why not let them mature and go to seed?’” Arlyn said. They began allowing a few acres of cereal rye, winter wheat and winter triticale mature and harvested them in July. The resulting seed is used as a cover crop on the rest of the acres that fall. Using cover crops became a gateway to incorporating small grains and more diversity into the Kauffmans’ cropping system.

“What we really like about raising cereal rye or triticale for seed,” Arlyn said, “is the opportunity for a lot of diverse cover crops we can plant after we harvest the small grain in July.” Not only is this an opportunity for a mix of soil-building cover crops, but also an opportunity Arlyn’s neighbor’s cattle to graze. “My cousin Andrew can put up fence faster than you can shake a stick!” Arlyn said as he spoke about the benefits of this crop-livestock approach.

The Kauffmans invited Alison Robertson, a plant pathologist at Iowa State University, to share some recent research that she and her lab team are conducting across the state regarding cover crops and corn seedling disease. Her team is trying to understand the possible role of seedling disease in corn yield drag when corn follows a cover crop like cereal rye. “Seedling disease can result in reduced stand and reduced crop vigor; both of those can contribute to reduced yields come harvest time,” Alison said. “Cover crops, like cereal rye, can potentially create a ‘green bridge’ for corn pathogens like Pythium.” The rye can serve as an alternate host for the pathogen which eventually infects the ensuing corn.” 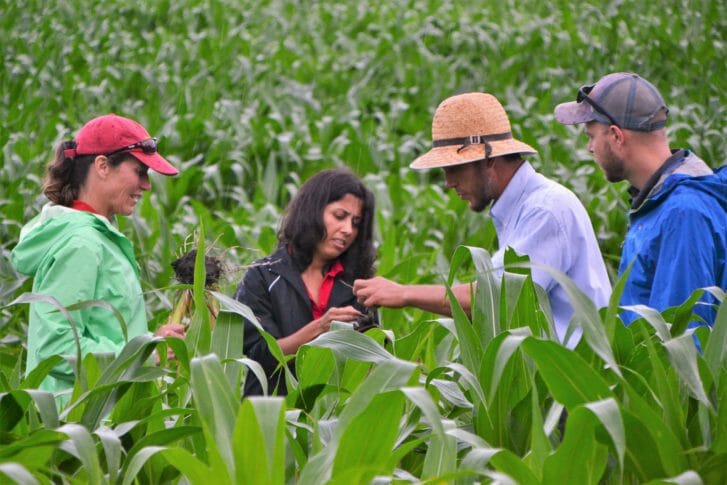 One of the ways the Kauffmans are trying to make cover crops work is to apply some N fertilizer to the corn at the time of planting and apply the balance at sidedress in June. Many other PFI farmers have cited this strategy as a recipe for success when planting corn after a cereal rye cover crop. This might be a way to help the corn overcome any early season N or disease stress that could result from the cover crop and eventually cause yield drag. This spring, Arlyn applied 60-70 lb N/ac with the corn planter. We stopped by his Uncle Morris’s shed to view the planter set up they use to accomplish this. One thing Arlyn pointed out several times was that he could not be farming but for the help of his family and the sharing of equipment. 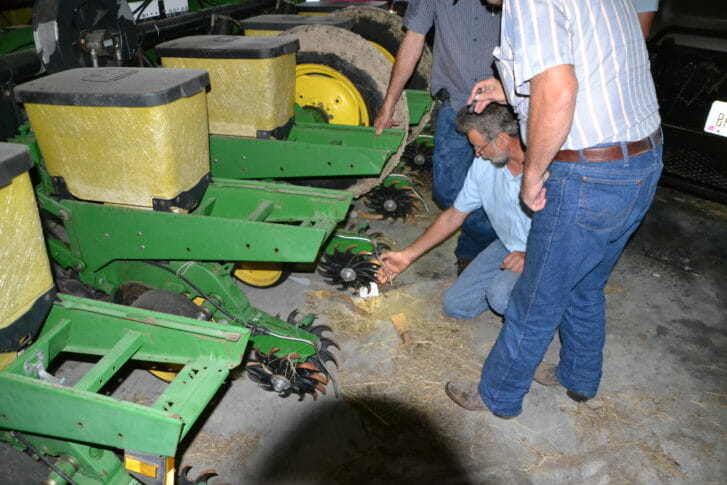 Arlyn’s uncle, Morris, showing field day attendees the set up on their corn planter for applying N fertilizer at the time of planting. 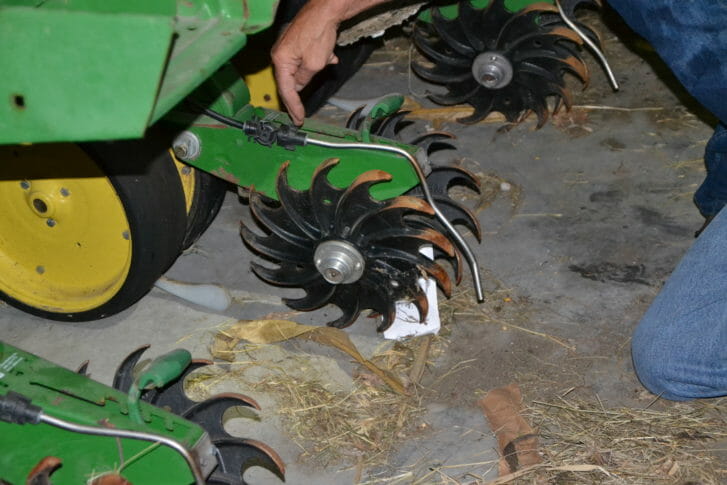 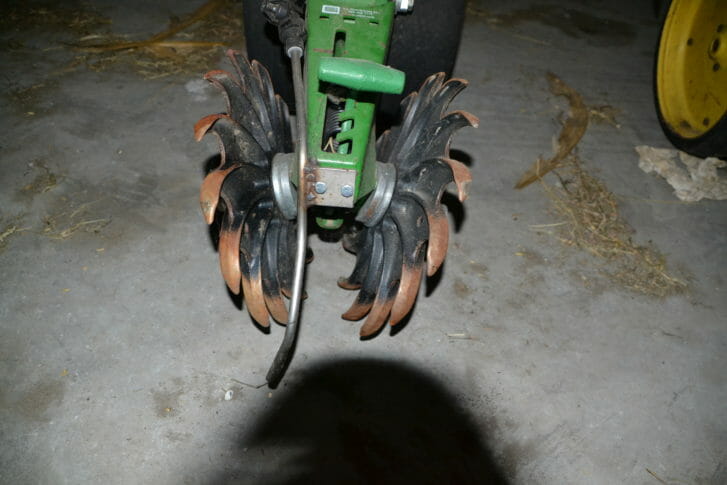 Considering how they’re trying to make cover crops work in their farm, Arlyn recited a mantra common to many PFI farmers: “This is not the right or only way, it’s our way. There’s probably a better way and that’s what we’re looking for.”

We’d like to thank Grain Millers and the Iowa Ag Water Alliance for sponsoring this event.