It was a picturesque scene at Grassway Farm in Maynard for the Wedemeiers’ first PFI field day. The milk herd grazed in a steady drizzle in the distance while the crowd huddled in one of the old barns to learn about organic transition from host, Scott Wedemeier.

Scott began with a little background information and an overview of the operation. “Initially when I came back from college we had just one barn with 100 stalls,” says Scott. “You need to increase your revenues, increase the volume of cows you milk when you add more people, and I was the extra person so we added more cows.”

Today the number of milk cows at Grassway Farm is 177.

“We didn’t want to add a lot of cost so we decided to start grazing,” says Scott. “We started grazing in 2005 and we’ve been grazing ever since. The reason we grazed initially was to add more cows with lower input costs from facilities and structures, but as you get into it more you realize there’s quite a bit of health benefits to the animals.”

With a new operation comes new challenges. Scott was met with some trials and tribulations before he worked out a way to graze cows, calves and heifers of all different ages without having to move several different herds.

Once the rain died down a bit, the crowd made its way outside to discuss Scott’s grazing tools including fence posts and his 18-year-old four-wheeler. He doesn’t like big, fancy four-wheelers. Instead he opts for a vehicle that starts everyday and simply gets the job done.

Scott creates paddocks with high tensile fencing. “If I’m going to go across the pasture and put in a post every three and a half seconds, I need to be able to reach the ground. I have the post sitting on my lap, the wire on the back, and as I go along I stop and put a post in.” This is harder to do in a large four-wheeler that rides high off the ground.

The pasture has some muddy areas as well that four-wheelers tend to get stuck in. Scott likes being able to physically pick up and move stuck four-wheelers instead of calling someone to come pull him out with a tractor. Scott then transitioned into a discussion about fence posts. The posts that work the best on his farm and that he’s implemented in his pasture are pigtail posts. They’re easy to get into the ground even when it’s frozen. He’s found that they can be set up the quickest. 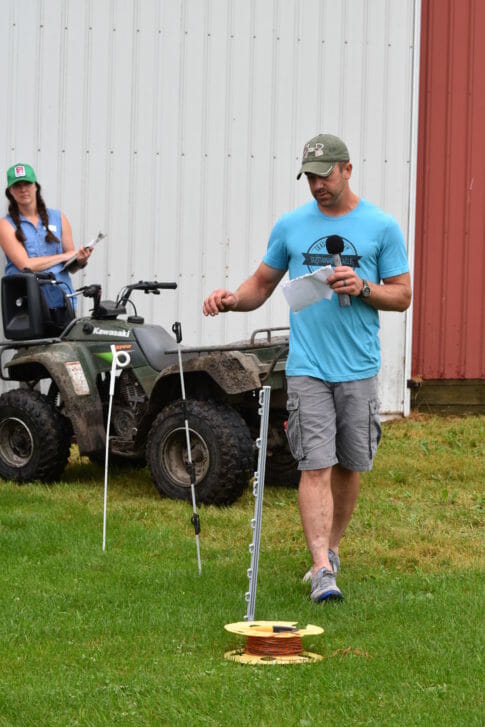 Scott likes to “nook and cranny” graze his herd. The flexibility that comes with portable electric fencing allows him to have unique paddock shapes. He even had his heifers graze around his barns to help control the ragweed near the buildings. After an overview of the Wedemeiers’ pasture tools, the group made its way to the milking herd in the pasture to further discuss herd management.

While standing in the pasture from the day before, Scott showed the audience the difference between a grazed paddock and a paddock that was soon to be grazed. He likes to go into the new paddock and just pull some grass to estimate what kind of forage the cows are getting.

“Wherever this grass breaks is what they’re going to pull off,” Scott says. “They don’t have any top teeth so if that’s what you can tear off without cutting it or clipping it that’s what the cows are eating.” He’s used this method to get a good forage sample for testing. He’s gotten to the point where it’s been so consistent at 170-180 relative feed value (RFV) that he’s simply stopped testing it. 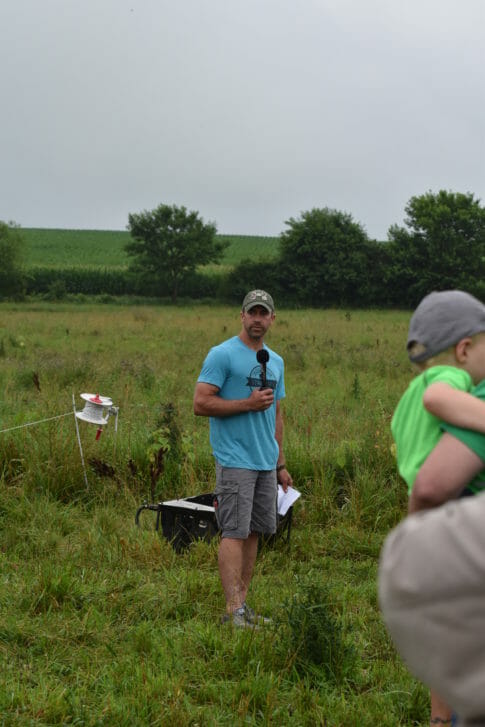 The Wedemeiers use homemade waterers for the cows. This one is on its 7th year. It’s a 30-gallon barrel with ⅔ cut off and framed up in steel. It’s light enough for Scott to throw on the four-wheeler but sturdy enough that the cows can stand in it. The large flow valve helps enable him to have a smaller waterer. If he had a smaller flow valve he’d have to haul a big tank across the pasture.

Along the lanes run an underground PVC pipeline with spigots every 300 feet. Scott has painted the spigots red so he can find them when the grass gets really tall. The location of these spigots plays an important role in deciding where the next paddock is going to be set up.

The lanes are hard to manage especially after heavy rains. The farm had received an inch of rain the night before, and the cows had torn it up pretty good. “That’s the only problem with dairy cows is that when they’re out they have to go back in to be milked.” says Scott. On wet days, Scott likes to set up paddocks as close to the milking barn as possible to avoid significant damage to his lanes.

The pastures also get beat up pretty badly on wet days, and today was one of those days. Scott combats that by having a few paddocks set up for really wet days. Those areas will need plenty of rest before they can be grazed again. Scott then moved the cows by lifting a gate made of PVC pipe with a t-base on it. “You can make a gate anywhere; you don’t need all these extra posts,” Scott says. 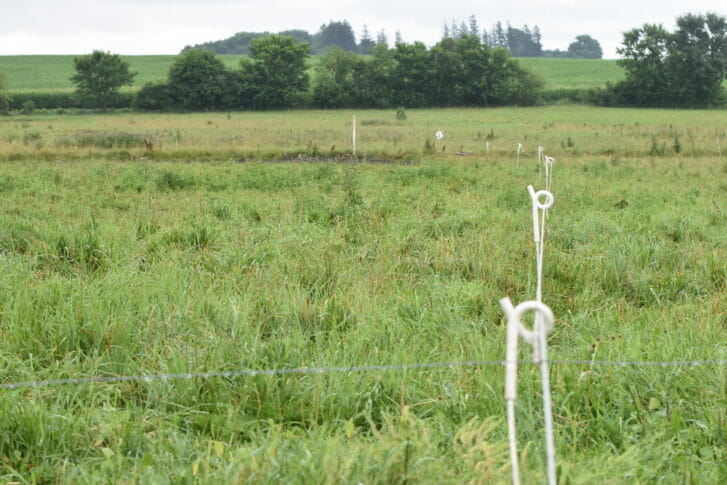 Discussing the transition to organic

After a light lunch provided by Organic Valley, Scott discussed his experience in transitioning to organic. When meeting with financial adviser about conventional versus organic dairying, it occurred to Scott that it was time for something to change.

“I can do this for the rest of my life and stay status quo, but I’ll never be able to buy my father’s farm and I said ‘what’s the point in that.’” At the time, the Wedemeiers were already doing a lot of the things that organic practices require. They were grazing and managing their cows differently than most dairies. So Scott pitched the idea to his dad, Gary, and they began the transition.

The problem was that the Wedemeiers decided to transition to organic in March which meant they had to return all of the conventional seed and fertilizer they had already purchased. Scott says, “That first year was pretty rough getting going.”

Struggles were abundant during that first transition year, especially with equipment. Scott had to buy a new cultivator because it was six rows and their planter was eight. They realized they had thrown out some of this equipment in the not-so-distant past. Scott recalls in that first year struggling to wait to plant when it was dry and beautiful in late April while his neighbors were all in the field.

Scott uses beef and pork as another income source for the farm. In 2017, Grassway Farm sold 17 steers in halves and quarters and 13 hogs. Scott raises Brown Swiss steers that are a byproduct of the dairy operation.

“We came to the conclusion that there wasn’t really good access to organically raised beef or hogs,” says Scott. “So we decided to ramp up our efforts as a service to our community. Grassway Farms was able to utilize students taking a small business marketing class at Wartburg College to help them begin to market their products and sell their brand. The students helped develop grasswayfarmiowa.com and created a logo for the farm.

The milking parlor is a TRANS Iowa Low Cost Milking Parlor designed by Dr. Larry Tranel at Iowa State University. “If we continued to milk cows the way we did, it would have taken me 20 years to milk the same cows that I can in this parlor in 15,” Says Scott. “So that’s a lot of time off, five years.” 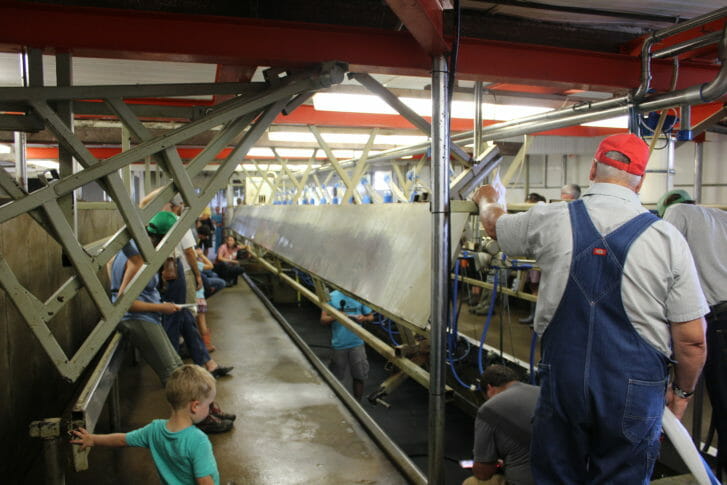 The crowd listens intently as Scott explains the TRANS Milking Parlor design. Scott is able to milk 70 to 80 cows an hour with two people in this parlor.

Scott made a few adjustments to Dr. Tranel’s parlor. He measured his cows to be sure they would fit the parlor well. With this parlor, Scott is able to milk 70 to 80 cows an hour. Each side of the parlor can milk 15 cows at one time. As one side milks, the other comes in. The heifers do an excellent job on their first few times milking, and Scott hardly ever has an issue with an unruly heifer. The cows do the pushing and prodding for him.

At the end of the field day Scott gave some final advice. “If you’re going down this road I wish you luck and certainly associate with people who believe in what you’re doing.”

Thank you to the Wedemeier family for opening up their farm! This field day was put on in partnership with Iowa Organic Association and funded by Organic Valley and USDA’s Risk Management Agency.