Oats as a feed grain for pigs is nothing new, yet many producers are concerned over the high fiber content and low test weight.  Well-balanced small grain-based diets can perform as well as corn- and soy-based diets, especially when oats are dehulled and fed to gestating sows.

Nutritionally, small grains are similar to corn but provide less energy and vary in fiber, fat and lysine content.  The high crude fiber content of oats is desirable for pigs at all stages of production, but the concern is balancing fiber content without limiting energy requirements to meet daily gains. Of all the small grains, oats have the highest fat content (2-12%), have almost double the amount of lysine of corn and are rich in vitamin B1, B2, B6, and vitamin A, K and E. Oats help maintain normal intestinal function, reduce risk of constipation and diarrhea and minimize stress behavior.

To summarize, oats have: 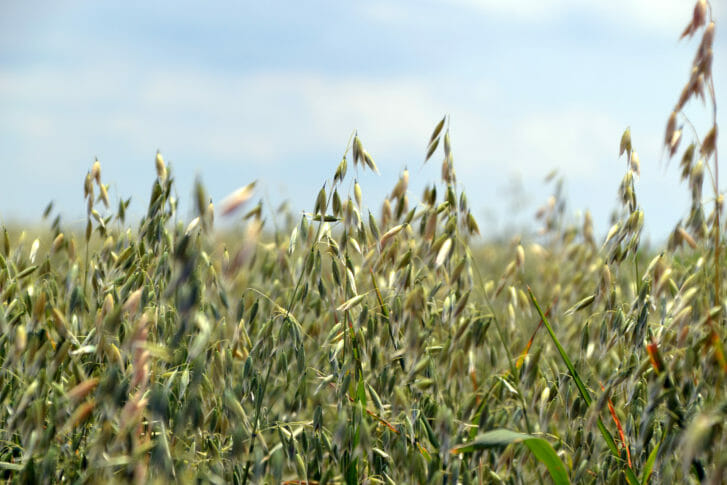 Oats are highly palatable to all ages and production classes of pigs. They are fed primarily in two forms – hulled or dehulled; dehulled oats should be ground to prevent the pigs from separating out the hulls from the grain, that way they consume both. A fine to medium grind is better than a coarse grind. Using dehulled oats or naked oats improves feed value and palatability.

Oats are best used in gestating sow diets, but should be limited in other production phases because oats fill up the gastrointestinal tract and its compartments. Jeff Mattocks, from Fertrell, spoke at the PFI conference in 2017 (shown below). He mentioned how, “feeding oats to pigs is a natural way of controlling for parasites. Due to the sharp fiber, the hull of the oat passes through the digestive tract causes a natural irritation to the parasites that build up in the digestive tract.”

For gestating sows, oats can be the sole grain source in rations, but oat-heavy rations will need to be balanced to meet energy requirements. For lactating sows, the percentage inclusion rates should be lower than gestating sows because producing milk for piglets requires more energy. Oats can help minimize diarrhea problems in weaned and small feeder pigs and can protect gestating sows from constipation and prevent ulcers in growing pigs. Paul Ackley, a farmer in Bedford interviewed for our Rotationally Raised video series says, “Oats are smooth feed, a soothing feed to the gut for sows. Oats help to bulk up the sows, helping them from getting constipated around farrowing.”

What Percent of the Diet can be Comprised of Oats?

Compiled from the Tri-State Swine Nutrition Guide and other state extension nutrition guides from the University of Florida and Iowa State University.

How Much Should you Pay for Oats?

The relative value of a feed ingredient is used to compare the value of that feed to the price of industry standard energy and protein. The value of small grains should be based on their nutrient contribution to the ration regarding digestibility and costs. The current price for corn is $3.41/bushel (56lbs/bu) and oats $2.37/bushel (32lbs/bu); on a per pound basis, corn costs $0.06/lbs and oats costs $0.07/lbs. 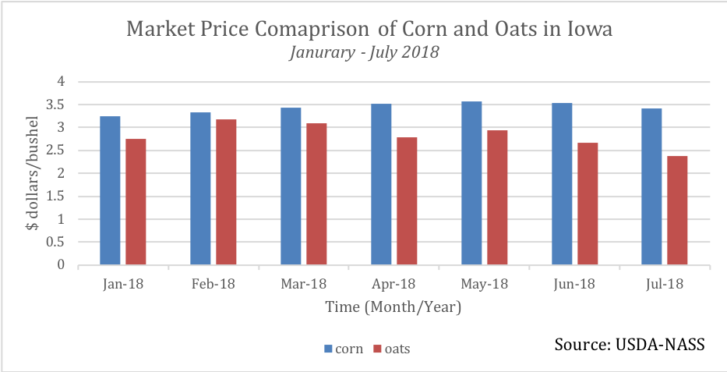 When looking at sample rations from Iowa State University Extension in the tables below, comparing the cost difference between a diet with or without oats, the rations with oats are more expensive. However, this only compares the cost of the feed and does not account for other economic benefits of an extended crop rotation such as corn, soybeans, and oats with red clover or alfalfa hay. Decreased inputs from extended rotations include:

Examples of Oat Rations for Pigs 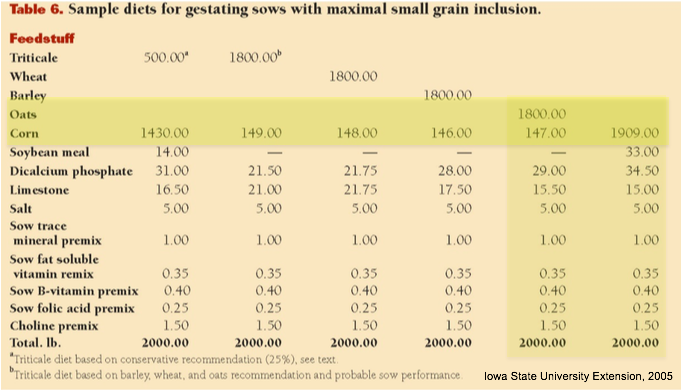 The table above, the highlights gestating sow rations with and without the inclusion of oats. From the two rations compared, the relative cost of corn and oats based on current market prices is shown in the table below.

How to Choose an Oat Variety