An important component of this role is not only educating the residents of their district, but also the lawmakers who represent them on the state and federal levels. The nonprofit Conservation Districts of Iowa organizes an annual Partnership Day at the Iowa State Capitol Building to help facilitate this essential interaction.

In mid-January, soil and water conservation district commissioners from across Iowa descended on the state Capitol building for one of the more successful Partnership Days to date, and PFI members were well represented. Commissioners met with 27 legislators from both the Senate and House of Representatives throughout the day. Those attending were encouraged to contact their lawmakers ahead of time to let them know of their plans to visit and intent to meet. Occasionally, this results in a scheduled meeting. More often, however, these meetings are impromptu throughout the day. 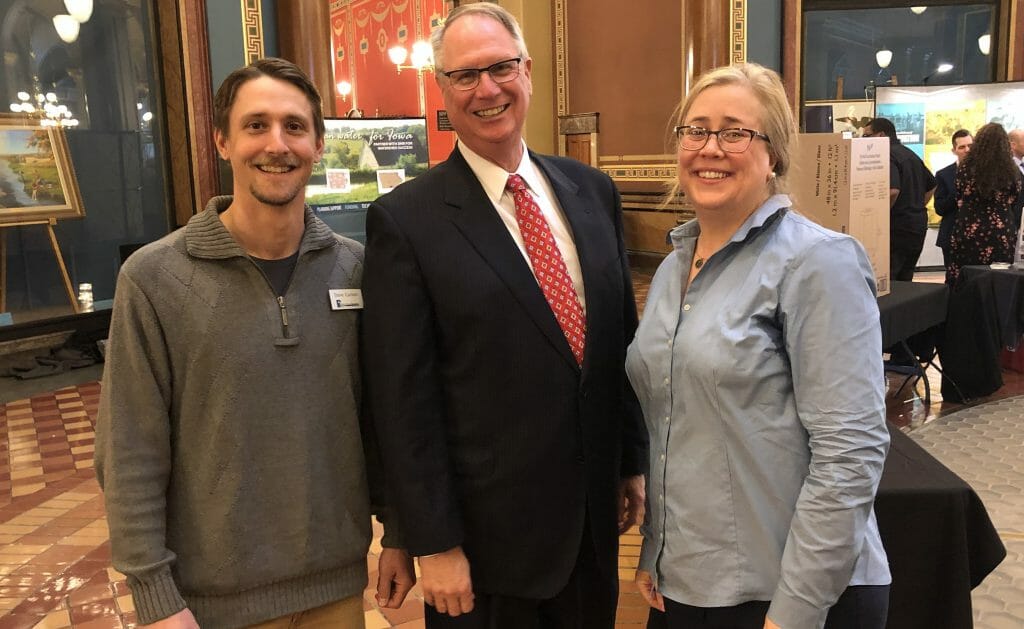 On behalf of Boone County SWCD, fellow commissioner April Burch and I had three representatives to target. We visited the entrance to both the Senate and House of Representatives’ chambers, and submitted a written request that was delivered by a page to our legislator. We struck out in all three of our first attempts, and were told to leave a note or try back later. While perusing the educational displays set up in the rotunda, showcasing successful water quality projects and other conservation efforts from across the state, we found our representative for the 48th District, Rob Bacon, doing the same thing. It’s helpful to know what your legislators look like! Rep. Bacon was happy to talk with us while strolling the rotunda. 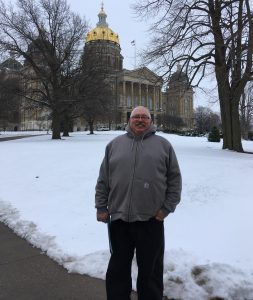 Fred Abels traveled to the state Capitol from Holland, in central Iowa, to meet with his legislators and share conservation efforts in his district.

Fred Abels, farmer and commissioner from Grundy County, has had similar experiences throughout the four years he’s attended Partnership Day. “This year I got a chance to talk with our senator, Annette Sweeney, along with another commissioner, just out on the floor,” Fred says. “The other commissioner and I are both doing conservation work, so we talked with her about that. It was pretty informal.” Sharing a personal story, as Fred did, to illustrate a point and highlight how a program works on the ground is an important way to establish credibility.

Whether your meeting is scheduled or unplanned, your impression on lawmakers will be much more effective if you’ve done some research on them. Know whether they have an agricultural background, and what legislative committees they serve on. Henry County commissioner Jeff Olson attended this year with that in mind. “One of my officials is a farm boy and the other has a spouse who was a farm girl,” Jeff says. “One of them retired and now we’ve got a new young man, who I was interested in meeting to introduce myself. He’s got experience in the Capitol but does not have a connection to a farm, and I wanted to let him know I can help and be there if he needed an ear.” 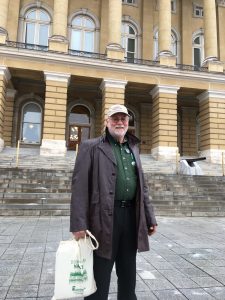 Why These Visits Are Important

The primary goal for meeting with our legislators face-to-face is to develop an on-going, personal relationship and to offer ourselves as a resource for them. As a fellow elected official, commissioners are viewed by legislators as experts on local conservation efforts.

Dennis Carney is vice president of Conservation Districts of Iowa, the non-profit focused on supporting commissioner education and development. “I feel like one of the main things CDI should be doing is to put policymakers in contact with the people who are administering the programs,” he says. Dennis notes that some newly elected lawmakers may not realize what a resource their district’s commissioners can be. “It’s important to try and make them familiar with CDI, the other organizations there, the commissioners and how the soil and water conservation district system works,” he says. Jeff supports this effort: “I try to make the contact to show that we’re elected officials right beside them, on the grassroots level.”

Fred Abels also sees Partnership Day as an opportunity to balance the narrative that lawmakers are exposed to. “Meeting with our legislators is important to keep funding flowing for conservation,” Fred says. “There are lobbyists there regularly who drive a lot of this – legislators are bombarded by them.” Noting that large agricultural organizations have the funding to pay for professionals to further their interests, Fred says Partnership Day gives other voices a chance to be heard. “This event gives us a chance to put a face in front of [lawmakers] and let them know there are boots on the ground out there.”

What We’re Asking For

Commissioners know what conservation needs are unique to their districts and whether they have the funding for technical and financial assistance to address those issues. Framing these district-specific needs to a direct funding request in the state budget helps to bring a local context to their decision.

Conservation Districts of Iowa provides commissioners with the budgetary details needed to make an informed request. For instance, the Soil Conservation Account was allocated $3.8 million in FY19, but it would take funding at the $8 million level to ensure district offices have adequate staff to deliver their programs and perform outreach to landowners. If funding for the Iowa Financial Incentive Program was increased from $8.3 million to $12.5 million, we could fund the current backlog of conservation practices.

To learn more about how to get involved with your local soil and water conservation district and what’s involved, contact Steve Carlson at (515) 232-5661 or steve@practicalfarmers.org.