How to Manage Small Grain Diseases While Maintaining the Bottom Line

“One issue with small grains in Iowa, and in humid climates,” says Nathan Anderson of Aurelia, “is that you can have some disease problems.” But small grains diseases can be managed with both cultural and chemical methods if you know when to scout and deploy defensive countermeasures. Knowing the key windows for disease susceptibility, when control measures are effective and the potential impacts if you don’t treat are all key pieces of information to making a profitable management decision. Dr. Emmanuel Byamukama, who studies and teaches small grains diseases at South Dakota State University, provided us with some of this knowledge on our April shared learning phone call to help farmers make profitable disease management decisions.

Several best practices for small grains production can limit your risk of having a disease take hold in the first place – regardless of the disease pattern. The first, “Over fertilizing can increase the risk for disease because of less air circulation, but if you under fertilize, this is not good either, because the plants are weak and unable to fend off pathogens,” Emmanuel says, “keep it at the optimum rate and split the application if it’s a winter small grain so that there’s not too much tillering.” The second is to select resistant cultivars to provide innate resistance where possible to diseases. This can save money in the long run by avoiding fungicide applications and maintaining yields, as Emmanuel says, “cultivar selection is a low hanging fruit to control diseases.”

Then, Emmanuel coaches, the next step is to know when conditions are right for diseases to strike, this can help organize your scouting calendar so you’re looking for the key diseases at the time that they’re most likely to be developing. “We’re scouting those diseases to see if they’re present, to see if we’re reaching a threshold and see what our environmental indicators are that might increase the prevalence of the disease if it is present already,” Nathan says, “so that allows us to make a good decision of whether we need to use those products or not.”  Some predictive tools can help along the way, but there’s no substitute for getting out in your field on a regular basis so you can detect changes when they occur.

Diseases that appear early in the season (April-May) thrive in damp environments and cooler temperatures, below 75 degrees Fahrenheit. This includes tan spot, powdery mildew and stripe rust. Tan spot and powdery mildew are both fungal diseases where inoculum survives on small grain residue in the field. Crop rotation is therefore a critical management strategy to prevent disease, but most farmers in the Cornbelt are probably already excelling at this point as continuous wheat rotation are uncommon in our area. Tan spot is characterized by leaf lesions with a dark center surrounded by a yellow, lighter halo and can infect both wheat and oats after long, wet periods. Powdery mildew looks, as its name suggests, like powdery ash covering the leaf. Small grains tolerate a low level of infection for both tan spot and powdery mildew so there’s no need to apply a fungicide unless lesions are detected on the second leaf below flag leaf. 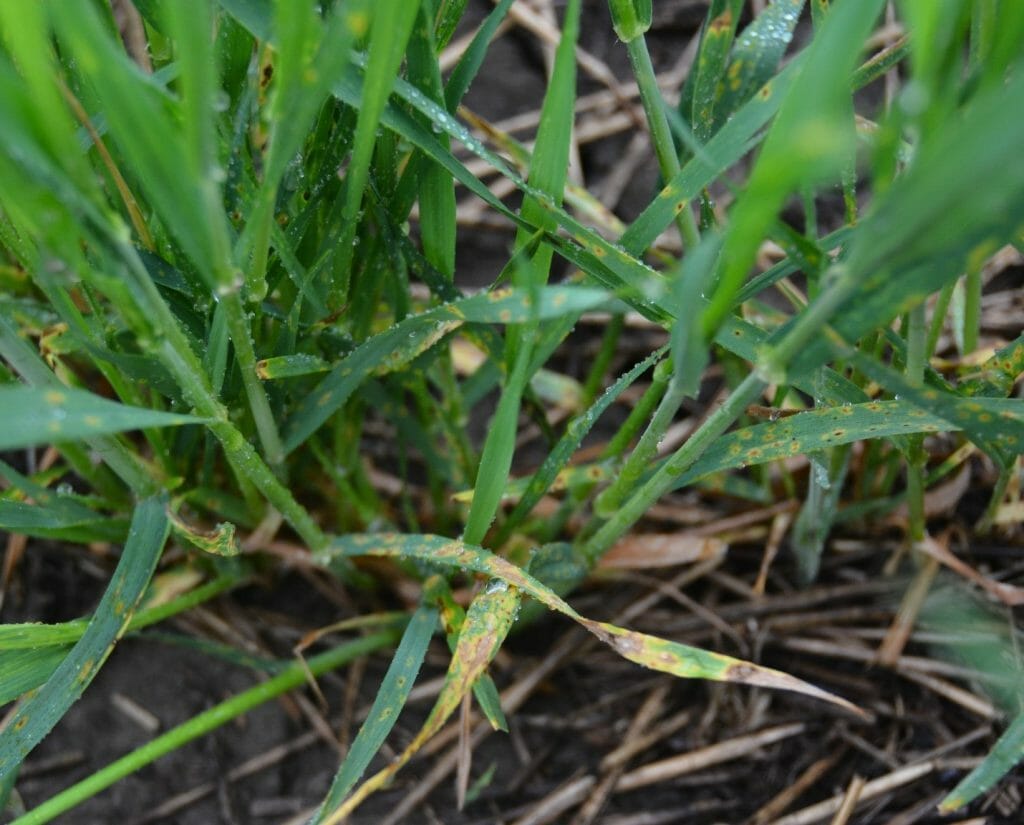 Tan spot symptoms on young wheat early in spring. Notice the wheat straw in this no-till field, which is the source of the tan spot inoculum. 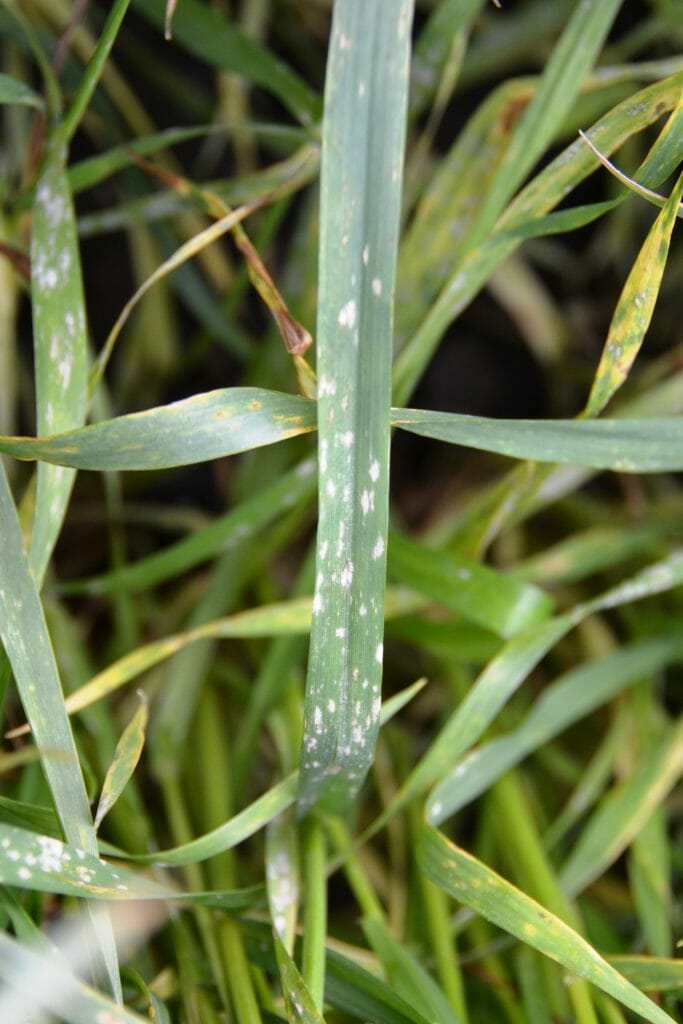 Powdery mildew symptoms in wheat. Notice the ash-like powder on the leaves and also the heavy tillering which can lead to early powdery mildew development.

Rust diseases require six hours of leaf wetness, and are unable to survive Midwestern winters. “The rust pathogens require a living tissue to survive in the Cornbelt,” Emmanuel explains. “Rotation is therefore not effective for rust diseases since the inoculum is windblown from the southern states.” Cultivar resistance is therefore the best cultural tool to prevent rust diseases and active scouting will determine if a fungicide application is necessary. There are three different types of cereal rusts that set in at different temperature conditions. The earliest rust is stripe rust, creating linear dark lines on the leaves that leave a rusty dark orange to yellow color on your fingers if you rub the leaf. Stripe rust occurs at 50-60 degree temperatures. Leaf rust requires warmer temperatures between 60-77 degrees and is characterized by dark brown spots. If any level of leaf or stripe rust is detected it’s important to spray a fungicide. Stem rust, which infects at the highest temperatures of 79-86 degrees, has largely been out-run by small grains breeders so this disease is hardly ever a concern. The USDA Agricultural Research Service’s Cereal Disease Lab posts rust movement updates on their website to give growers a heads up on rust’s progress northward and therefore when to ramp up scouting. 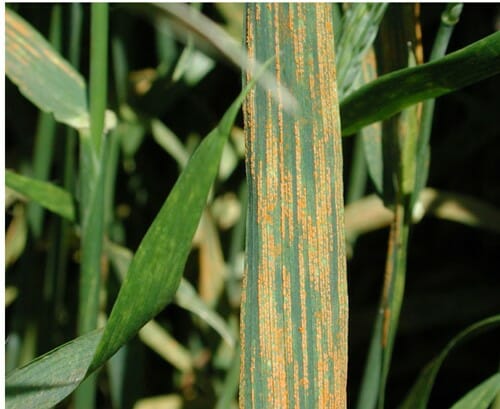 Stripe rust symptoms on wheat leaves. Notice the linear arrangement of the rusty, yellowish-orange pustules on the leaves.

Crown rust is a rust disease particular to oats that infects during moist weather with days between 68-77 degrees. If you brush against it, it will leave orange on your hands. The crown rust pathogen thrives on oat plants during the growing season and then moves to buckthorn stands to overwinter until oats are in the field once again. Removing buckthorn near farm fields can reduce the occurrence of crown rust though if there is still buckthorn on other properties in your area this may not be enough to stop the disease’s spread. The best cultural technique is to plant resistant oat cultivars. 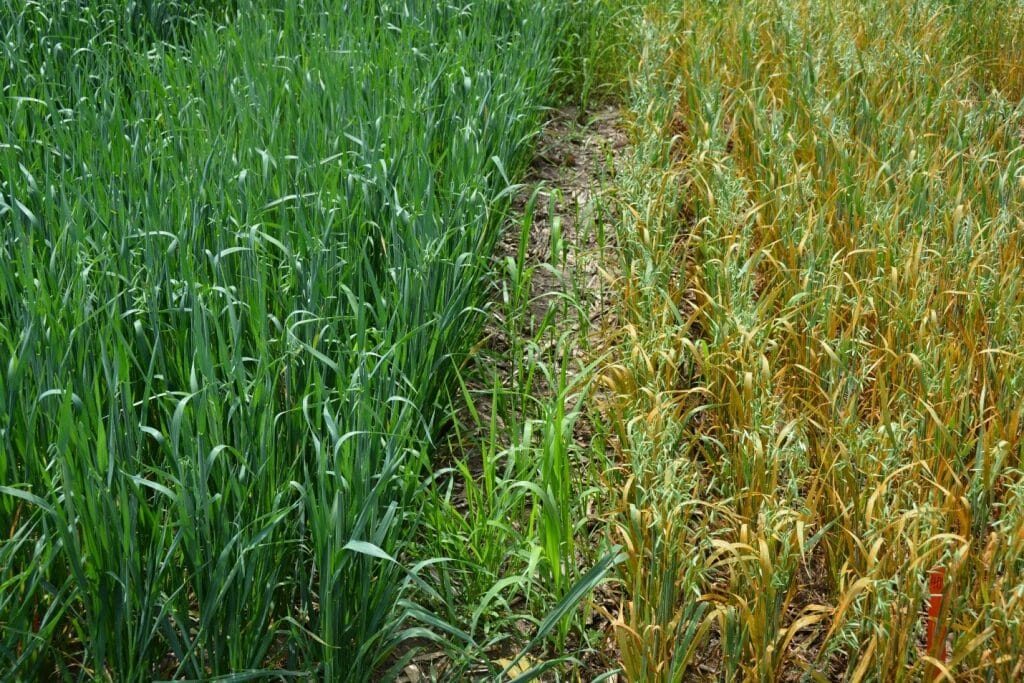 Diseases that affect small grains later in their life cycles include Stagonospora blotch and Fusarium head blight. Stagonospora is less common, affecting only barley, rye and wheat and infections on all but the latter are usually minor. The disease causes lesions similar to tan spot (dark in the center and yellow around the outside) but the lesions occur during or after flag-leaf growth stage, are larger and are shaped like a lens. Unchecked the disease can also cause glumes to turn dark and look water-logged causing shriveled kernels and low test weight. Crop rotation can prevent Stagonospora or a fungicide application at flowering. 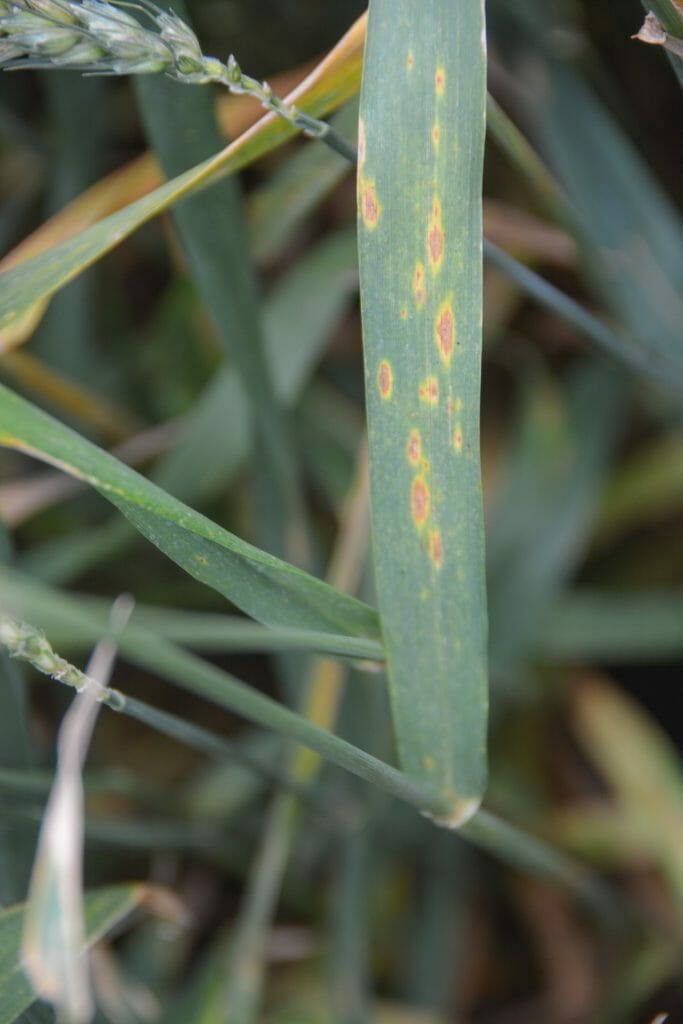 The big bad wolf of small grain diseases is Fusarium head blight (FHB) by the time it’s detected it’s too late for a fungicide application and once it takes hold it reduces small grain yield and can cause mycotoxin (DON) contamination in the grain. This disease is also known as scab. “Scabby grain can be rejected at the elevator,” Emmanuel says. “The maximum DON level allowed in grain by FDA is 2 ppm. When FHB is severe, DON levels as high as 35 ppm can be found in the grain! It can be a big problem in our area when we get warmer temperatures and moisture at the same time when wheat is at flowering.” To help growers predict when conditions are ripe for FHB, there is a great tool, www.wheatscab.psu.edu, which rates the risk for FHB based upon your area and the cultivar you have planted. This can help aid in the decision to spray fungicide at 50% flowering because in order for fungicide to be effective against FHB it must be sprayed at flowering before there are any signs of the disease. This is one area where scouting is not helpful. However, keeping an eye on the weather from the time wheat is heading to shortly after flowering (risk window for FHB) can help determine the need for a fungicide. The prediction tool helps to track the weather and provide the likely risk of FHB. 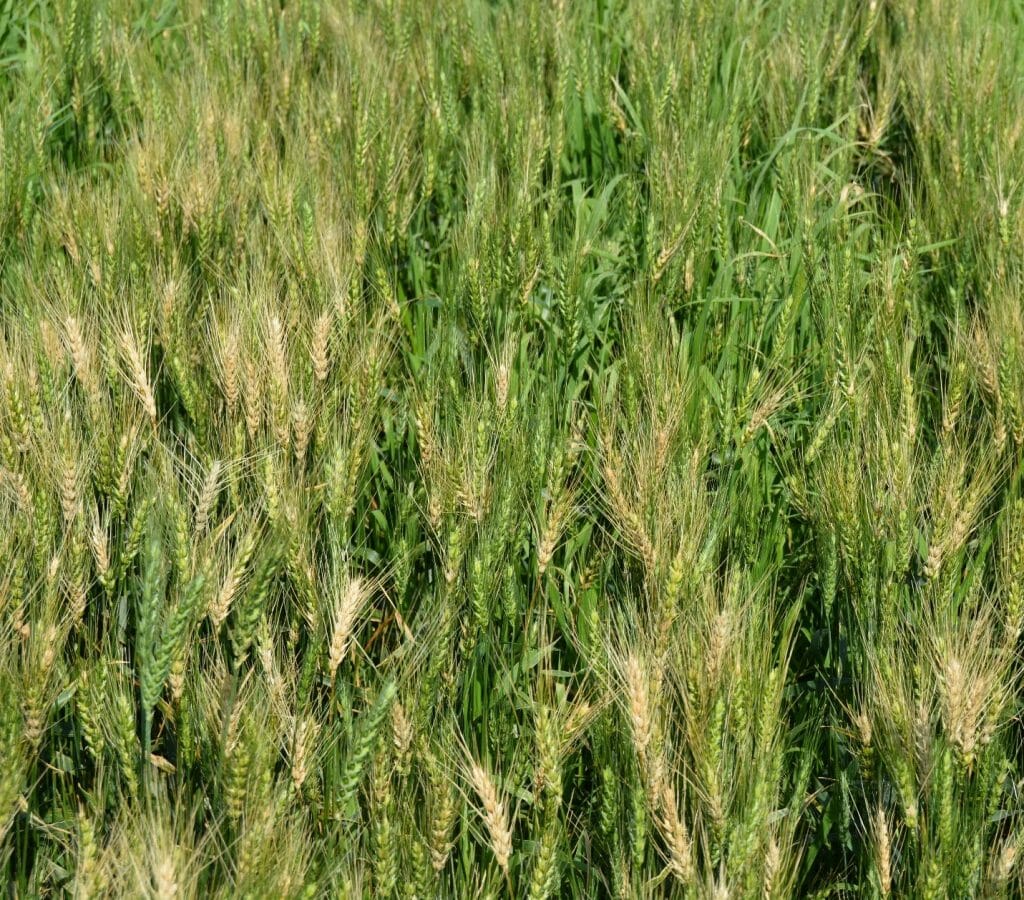 FHB inoculum can come from both corn and small grains – in corn the same fungus causes corn stalk rot. FHB risk can be mitigated by limiting corn and small grain residue on the field through crop rotation, removing residue or tillage. And FHB resistant cultivars should be planted if possible. The US Wheat and Barley Scab Initiative catalogues the moderate resistance of wheat and barley varieties on the market. But, be cautious, Emmanuel says, “no cultivars have total resistance.”

“Fungicides cost money and we want to make sure that we’re only using them when they are warranted,” Emmanuel says. There are three windows when you can apply a fungicide to a small grain crop:

“Best return on investment will always be the application at flowering,” Emmanuel says. This is the application that is most likely to increase test weight and keep grain marketable by preventing mycotoxins when FHB risk is moderate to high. You can determine if a fungicide application is necessary based on the FHB prediction tools and by scouting at flowering for leaf spot diseases on leaves. Fungicide treatments at the earlier windows should be more of a case by case basis based on scouting. Applications at tillering generally have the least return on investment and should only be invested in in high-residue continuous small grain rotations or where tan spot or powdery mildew are detected on the lower leaves. If stripe rust is detected, fungicide should be applied right away. Flag leaf applications have a slightly higher return on investment than at tillering, but are only necessary if disease development is observed on the second leaf below flag leaf.

What fungicide to use? “There are three main groups of fungicides,” Emmanuel says, “Group 11 (strobilurins), Group 3 (demethylation-inhibiting or sterol biosynthesis inhibitors) or Group 7 (succinate dehydrogenase inhibitors or SDHI). Group 3s are best for controlling FHB. Once wheat has headed we want to stay away from Group 11 because they can increase mycotoxin in the grain.” Most of the fungicides on the market have good to excellent ratings for the rust pathogens. One helpful tool is this handy chart of fungicide efficacy ratings by disease published by the North Central Regional Committee on Small Grain Diseases. For organic growers, there are some biological control options available too. “One product that we tested and really works well against leaf spot diseases in wheat is Bacillus amyloliquafaciens,” Emmanuel says, “and there are quite a few products on market with this biocontrol.” Federal regulations outline the full list of allowed and prohibited substances for organic production.

As far as equipment and application goes there are some pointers here too. You might think that spot spraying only problem areas is a good strategy to save money, but Emmanuel says, “Drone or spot spraying is likely not good for small grains because the diseases tend to be widespread throughout the field – even if you can’t see it yet.” Generally, you want a nozzle that provides good overall coverage over the small grain such as a fine, wide mist. However, “for FHB we want heavy drops so that the fungicide can go into the head,” Emmanuel says. “You don’t want the funnel type, you want a straight spray to place the fungicide on the head.”

Tim Sieren of Keota says that understanding these growth stages takes a little studying up, but is essential if you are going to be using fungicides. “It’s not different than with corn, you need to understand your V stages so you can know what time to apply the right chemicals,” he says. With disease management, timing is crucial, so whether you’re combatting crown rust in oats or head scab in wheat, the most important thing is to read the label. “That’s why they have the labels – to tell you the proper time to apply it to get the maximum benefit,” Tim says.

And just in case you’re finding all of that hard to remember I’ve summarized this information by disease in this chart:

Practical Farmers of Iowa holds regular calls on small grains production and marketing topics, monthly call topics and details of how to join in are circulated through our small grains e-newsletter which also provides monthly updates and resources relevant to what’s happening in the field. You can sign up for this newsletter here.