For two Boone-area growers, ornamentals have helped sustain their businesses

Separated by only 10 miles, Mike Salama of Salama Greenhouse, and Nicole and Steve Jonas of Red Granite Farm, have each created businesses that integrate fruit and vegetable production with ornamental plant production – a practice that has diversified their operations and expanded their customer base. Though they share this approach, their operations are totally unique.

Using What You Have

Joe and Vivian Salama, Mike’s parents, began growing greenhouse cut roses in 1973. Roses today, however, ship cheaply from Central and South America, and the Salamas gave up roses in 2004, instead focusing on Easter lilies, poinsettias, spring bedding plants and baskets, and floral arrangements. When Mike returned from California in 2013 to take over the business, he recognized the value of the existing enterprises, but knew there was more to do.

In his parents’ day, everyone went to the greenhouse to buy plants and flowers. Now, customers expect to buy them at the grocery store and elsewhere – not just the retail greenhouse. So Mike has adapted his business, working with larger wholesale accounts, but also flower shops and grocery stores that buy by the dozens of plants for holidays like Easter and Memorial Day. As a full-service flower shop, the Salamas are also always ready for weddings, funerals, and school dances, and Mike does custom vegetable seedlings for local vegetable farms. 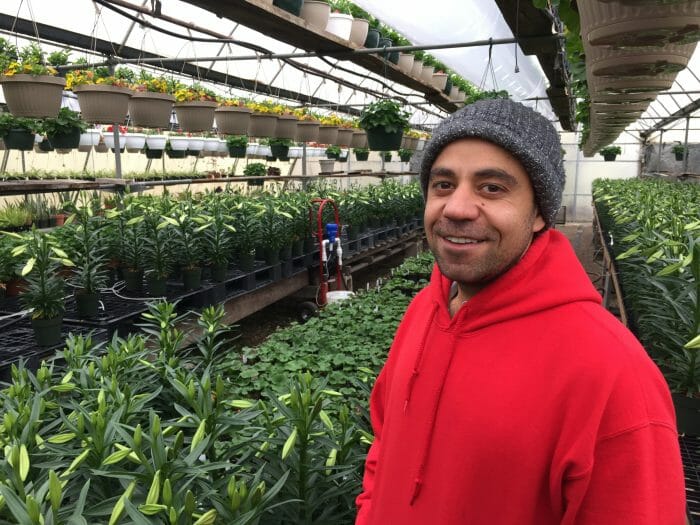 Mike Salama in one of his greenhouses, with Easter lilies in the foreground.

Watching trends and listening to buyers, Mike is making more finished planters, baskets and living décor – like succulent picture frames – and selling them in their retail greenhouse and to their wholesale customers. He’s tripled the volume of finished planters from when he started, and could do more, though says he still sells plenty of annual plugs for customers to create their own planter mixes. In the Salama retail greenhouse, most customers are still women over 30, but not as uniformly as in the past.

“I see more men coming in to buy landscaping plants and flowers for their own use – not just the occasional bouquet,” Mike says. “Younger customers, who require a bit more hand-holding as first-time buyers, tend toward interesting foliage, like coleus and grasses, as well as succulents for their ease of maintenance and curious forms.”

The biggest change, however, was born in the oldest infrastructure. Mike put the old rose troughs to work growing hydroponic tomatoes and cherry tomatoes in the spring and summer, which he sells through grocery stores as Tomato Joe’s and Lil’ Joe’s. He also uses them for hydroponic greens, which are harvested from September through the deep winter.

When the spring bedding plants are finished in June, the polycarbonate panels serving as greenhouse tables come off the rose troughs, and the troughs are planted to hydroponic greens. “Before this, the greenhouses were empty from July through March,” Mike says. “Now they are full – and earning income – year-round.

But not all of Mike’s decisions have been right, or easy. Some wrong decisions end up as jokes, like the box of macramé basket hangers he threw out (who really thought macramé would come back into style?). Other challenges are persistent, like maintenance issues and seasonal staffing. “When something breaks and you have to stop everything to fix it, there’s no way to plan for that or staff for it,” Mike says.

With seasonal staffing, Mike is encouraged that the move to more year-round production has let them keep some quality staff all year, but the budget is tight. “It’s difficult to have high enough sales during the winter to pay for employees with higher wages,” Mike says. “So I either just break even and keep staff that is trained, or I lay them off and hire inexperienced staff the next season, and spend time retraining everyone. I’m still not sure which way is better.”

(Left) Nicole Jonas produces ornamental plants from seedlings, bare root, division or propagation, depending on the plant. (Right) A sampling of plants for sale at Red Granite Farm.

Building What You Need

While Mike created new enterprises using an existing structure, Steve and Nicole Jonas have built their business from scratch, merging their independent passions for ornamental plants and vegetable production to start a family business. Both have degrees in horticulture from Iowa State University – Steve in vegetable production and Nicole in ornamental plants and landscaping design. They moved to their property in 2007, which had a house and a barn (which now functions as the garden center), and have added a high tunnel, chicken house and, most recently, a packing shed.

Their first year on the farm, Steve and Nicole began selling vegetables at farmers market and continue to do so, growing 3 acres of produce. In 2011, Nicole started the perennial plant enterprise, and 800 laying hens now round out the three pillars of their farm business. She focuses on landscaping perennials – cultivars of native species and ornamentals – and has found that more people are interested in establishing flowering plants to benefit pollinators.

We sell a lot of cultivars of native plants, which are good for people who want the look of a native prairie, but want to better control the spread of it or are growing in pots,” Nicole says. “This isn’t just to make your house pretty; it’s to support pollinators.”

For regular plant sales, Nicole finds she markets best to gardeners and people who already know their plants. Instead of marketing in a 20-mile radius, she advertises to people who live 50-100 miles away, positioning the farm – and her classes and workshops – as a destination. For true novices (and committed gardeners in search of fresh ideas), Nicole also does landscape design consulting.

For this, her own green thumb is particularly useful. “I try to pick things I have tried myself and have in our landscape on the farm,” she says. “Then when a customer – particularly for a landscape plan – comes to the garden store, I can show them how the plants will look grown-out in the landscape, not just in the pot.”

In addition to their farm businesses, Steve and Nicole both have other jobs. Steve works full-time running the compost facility at ISU, which provides the couple and their three children with health insurance and benefits. Nicole works part-time during the winter at Story City Locker, in addition to handling the bulk of the farm work and consulting. “In some ways, we’ve picked a certain lifestyle and now we have to support it,” she says.

“The spring sales are boosted by the garden center. I don’t know where we’d be without this part of the business . . . . It has been a huge part of our income.” – Nicole Jonas

The most challenging aspect of the Jonases’ farm life, as it is for many, is balance – keeping everything running to a high standard of quality while “staying sane” and making time for family, and balancing the expectation that farm kids need to do chores while also creating incentives so they want to help with more unsavory tasks, like scooping out the chicken house or spending a Saturday at the farmers market. “For some jobs, we pay them,” Nicole says. “They put that in their savings account and when they need basketball shoes, or someday a car, they have their own money.”

She also notes that because Steve works full-time during the growing season, she has to be mindful about not “bombarding him with farm stuff the minute he gets home.” Additional labor has helped tremendously. “Once we were big enough to support some employees, it made us more efficient, and at the end of the day made this business so much more enjoyable,” Nicole says. She does strongly recommend, however, that anyone starting a retail space start small and grow slowly, as building a customer base was the hardest part of the business.

Now that they’ve had a few years to reflect and refine their systems, Nicole and Steve feel the farm’s three enterprises are complementary. “We don’t do spring vegetables,” she says. “We plant our fields, of course, but we don’t start going to farmers market until June. The spring sales are boosted by the garden center.

I don’t know where we’d be without this part of the business. It does have a lot of input – this stuff isn’t cheap to buy, but it has been a huge part of our farm income. Perennials don’t sell themselves like vegetables do – it really takes a salesperson, but that’s what I like to do.”

Farming With a Plan