Farmers put this age-old supplement to the test

Apple cider vinegar has long been used as a folk remedy for humans and livestock alike. When fed to livestock, farmers claim it aids in fiber digestion, increases milk production and acts as a dewormer, among other benefits. Over the past two years, several dairy farmers participated in an on-farm research trial to measure the effects of the supplement on their milk cows.

Farmers involved in the study wanted to compare the milk quantity and quality of cows fed apple cider vinegar to those who didn’t consume it. In an ideal research setup, half of the herd would receive the vinegar and the other half would not, and the milk would be analyzed separately. A big lesson learned from this trial is that it’s very difficult to conduct milk analyses in on-farm research settings. Because dairy farmers milk all their cows into the same bulk tank, there’s not a good way to keep milk separate in order to measure the impact of a certain treatment on milk characteristics.

Because splitting the herd and keeping milk separate was not possible, the farmers tried a different method: They fed the apple cider vinegar to their herd for three-month increments, followed by three months of not feeding it. In the second year of the trial, they switched the time of year they were feeding the vinegar to try to account for seasonal variability in milk production. Because of the limitations imposed by the realities of a working dairy, results of this trial are not statistically significant, but the farmers learned from their experiences nonetheless.

Apple cider vinegar can either be mixed in with livestock feed or added to the animals’ water source. In this trial, farmers added the supplement at a rate of 4 ounces per cow per day. When it’s added to the feed, it is commonly dumped into a grinder-mixer while the feed is being mixed. John C. Gilbert, who farms near Iowa Falls, adds apple cider vinegar to his mix of corn, soybean meal and minerals. He lets the mix sit for 24 hours before feeding it to his dairy cattle, which allows the acetic acid to start breaking down the grains. “Apple cider vinegar makes starch more available,” says John, who started feeding his cows apple cide vinegar four years ago. The Gilberts also add a heavy dose of vinegar to the cows’ water around calving time because they believe it helps keep cows healthy during birth and the onset of lactation. 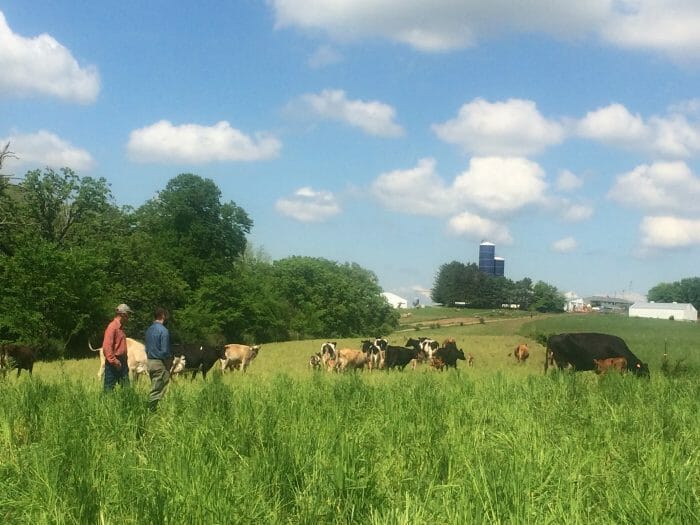 Francis Blake, left and Eric Bryden stroll through pasture at Blake Family Farm outside of Waukon.

“Everything is so seasonal, it’s hard to pinpoint when a product is helping or not.” – Francis Blake

Francis Blake, of Waukon, and Scott Wedemeier, of Maynard, both Organic Valley dairy farmers, also mix it in with feed. Francis pours apple cider vinegar on barley as it’s being ground, before he adds minerals, salt, kelp and diatomaceous earth to the feed mix. He recalls the first time he fed apple cider vinegar: “The vinegar smell was strong, but the cows licked it right up. They really go after it when vinegar is in there.” 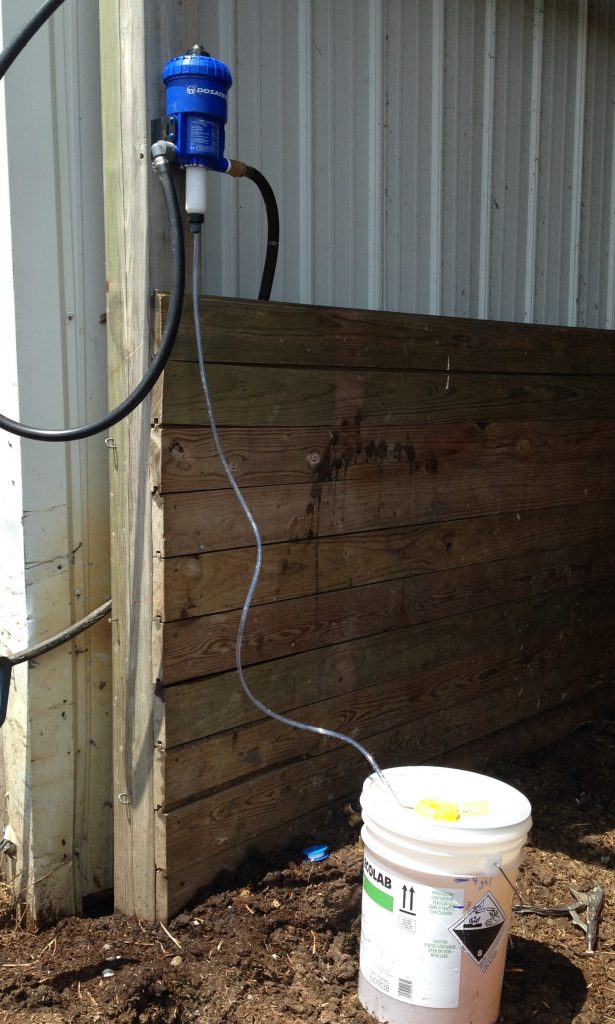 Kevin Dietzel uses a dosimeter to administer apple cider vinegar in the cow’s drinking water at a rate of 4 ounces per cow per day.

Scott dumps the vinegar on finely ground corn and adds water to make a cakey mixture. This mixture is then blended with soybean meal and minerals to evenly distribute the vinegar. At one point, Scott tried spraying apple cider vinegar on the feed with a tank and electric pump, but found out this method would not work in the winter. The trial called for the participants to feed apple cider vinegar during the winter, in order to keep on the three-month feeding schedule. That added an extra obstacle – keeping the vinegar from freezing. Ideally, it’s stored in a heated shop. But if that’s not an option – as it wasn’t for Scott – one workaround is to keep a 1,500-watt stock tank heater in the tote with the apple cider vinegar. This worked for Scott, but he still had trouble keeping the plastic valve from freezing on sub-zero days.

Apple cider vinegar can also be poured directly on hay or silage: some farmers use it on hay as a preservative to prevent mold. For Kevin Dietzel, a 100% grass-fed dairy farmer and cheesemaker in Jewell, adding the vinegar to his cows’ water was the best option, since he doesn’t feed any grain. Kevin used a dosimeter – a device that injects apple cider vinegar into his water line at the desired concentration – from a 5-gallon bucket filled with vinegar.

“When I first started adding it to water at the beginning of each three-month period, the cows sniffed the water and acted funny,” Kevin says. “They were suspicious because it smelled different, but then they drank like normal after the first day.” He noticed a layer of solids at the bottom of the water tank during time periods when he fed apple cider vinegar that hadn’t been there otherwise, and thinks the acetic acid in the vinegar causes iron to settle out of his well water.

Scott Wedemeier and his family milk around 165 cows near Maynard in northeast Iowa. Milk yield data from June 2017 to December 2018 shows that, on average, when the herd was administered apple cider vinegar, the cows produced 87 pounds of milk per cow per day versus 78 pounds when vinegar was not offered. The cause of the 9-pound difference is difficult to parse out, since the Wedemeiers operate a grazing dairy. In these systems, milk production is influenced heavily by season, weather and forage variability. The Gilberts also observed differences in milk production. “When we first started feeding apple cider vinegar, if we would run out, we would see an immediate drop in milk production by a couple pounds per cow per day,” John says. Yield results from this study are encouraging.

In addition to total yield, butterfat and protein are important components of milk, and dairy farmers are paid more for milk with higher butterfat and protein content. Generally, milk contains 3% to 4% butterfat and 3.5% protein. For each of the farmers in the study, apple cider vinegar had a negligible effect on the amount of butterfat and protein in the milk. And though it didn’t notably boost butterfat and protein, it didn’t adversely affect those milk components either. For the Wedemeiers, the vinegar also resulted in some cost-savings. “When we were feeding vinegar, we removed an expensive yeast product that promotes the digestion of fiber from the ration,” Scott says. “We were expecting butterfat depression from that, but didn’t see as much irregularity as we expected. We saved money doing that.” 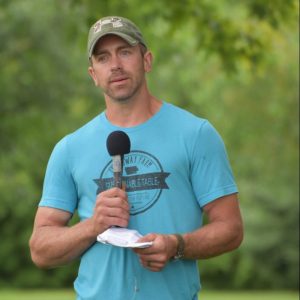 “I think the apple cider vinegar promotes the right bacteria in the digestive system and helps to keep bad bacteria, like E. coli, from proliferating.” – Scott Wedemeier

Although the results of this trial did not show statistical differences between groups, farmers made several anecdotal observations. Proponents of apple cider vinegar, for example, suggest that acetic acid shifts rumen pH in a way that helps fiber digestion – thus helping cows to digest forage. Scott noticed when his cows were supplemented with vinegar, they had smoother manure, indicating well-digested feed. “The digestion of the feed products was really good,” he says. “I saw more fiber and chunks when they were not on apple cider vinegar.” He also never dealt with cows “going off feed” – stopping eating – during vinegar feeding periods. “I think the apple cider vinegar promotes the right bacteria in the digestive system and helps to keep bad bacteria, like E. coli, from proliferating.” This trial has also got Scott wondering if apple cider vinegar would help with cows’ transition from their dry period – just before calving – to lactation.

Francis saw no real differences in animal appearance or milk production. “Everything is so seasonal,” he says. “It’s hard to pinpoint when a product is helping or isn’t.” But he still thinks it’s a good idea to keep feeding his cows apple cider vinegar, even though the benefits are hard to measure. Kevin, however, does not plan to continue feeding it to his cows based on his experiences during the trial. “I don’t spend money unless there is a very good reason to, and so far, the benefits seem marginal,” he says. 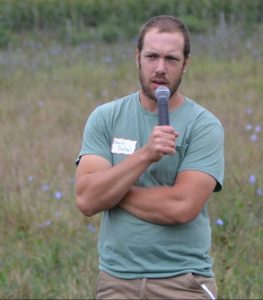 ”I don’t spend money unless there’s a good reason to, and so far, the benefits seem marginal.”
– Kevin Dietzel

Kevin wonders if increasing the rate from 4 ounces a day – or adding it to feed instead of water – would have reaped a greater benefit. Another problem with apple cider vinegar on Kevin’s farm is time: filling a 5-gallon bucket with vinegar every day adds yet another step to his daily chores.

The participating farmers are pleased they saw no negative effects from feeding vinegar, but still have to decide if administering it is worth the cost. The raw, food-grade vinegar for the study was ordered from The Vinegar Guys, which sells organic vinegar for $5.50 per gallon and regular vinegar for $3 per gallon.

Review of: “Nourishment: What Animals Can Teach Us About Rediscovering Our Nutritional Wisdom”