Review of: “Nourishment: What Animals Can Teach Us About Rediscovering Our Nutritional Wisdom”

Reading Fred Provenza’s book “Nourishment” took me back to his three-day PFI-sponsored workshop in Winterset during the Indian summer of November 2016. New to farming, and to rotational grazing practices that represented the history of my farm, I wanted to attend the workshop as soon as I read the description of the event.

When Fred began the first of his many Powerpoint presentations on day one, I knew I was in for a ride! Readers of “Nourishment” should likewise be prepared for a trek through thought-provoking information as well. 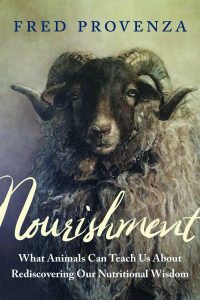 The book is a synthesis of Fred’s life work. He draws on experiences from growing up fishing in mountain streams of Colorado, to working on a Rocky Mountain livestock ranch, to researching goats and sheep in the shrub-grassland rangelands of Utah as a graduate student and professor at Utah State University.

The heart of the book is about food choice and feeding behavior of ruminant animals. The book is not a “how-to,” however. Rather, Fred combines his observation and study of animals to describe why animals select food the way they do given the opportunity.

He does so with stories from his research findings and those of others to develop a big-picture view of food preference by animals involving everything from microbes in the ruminant gut to plants and plant communities in the natural landscape.

Early in his research career, Fred studied the feeding habits of goats on the shrub blackbrush. Why did the goats prefer the older, seemingly less palatable stems of the shrub rather than the new shoots that are more nutritious and higher in energy and protein? To find out, Fred conducted feeding trials to test the goats’ feeding preferences. He extracted secondary plant chemical compounds from the new shoots and combined them with flavoring into food pellets, which he fed to the goats.

To his surprise, the goats ate the flavored pellets of every chemical compound, including pellets containing tannins. But when he fed the goats tannin pellets a second time, he found the goats would not eat them – they had learned after the first feeding that the tannins were undesirable and unpalatable. But how? Fred concluded that the tannins communicate with the cells and organ systems in the goats’ bodies to provide feedback that causes a dislike for the flavor associated with tannins.

While researching sheep in winter, Fred observed that the animals ate 10 species of shrubs and a grass species. In the morning, the sheep ate sagebrush. In the afternoon, they ate grass and other shrubs, and in the evening, the sheep ate four-wing saltbrush.

The pattern revealed that the sheep routinely ate meals in courses. From this study – and other research on sheep and cattle feeding habits by colleagues – Fred concluded that the animals eat plants in a particular sequence and combine plants that contain different amounts of energy, protein and secondary compounds to meet their nutritional needs and detoxify harmful compounds. 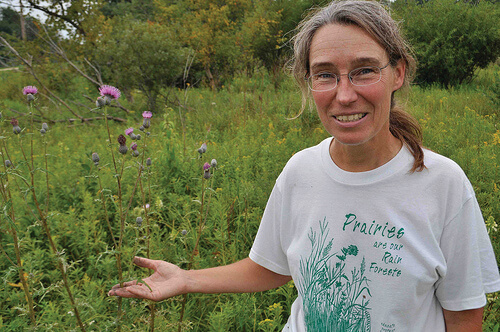 Mary Damm is a plant ecologist, most recently researching plants and soils of native and reconstructed tallgrass prairies in Iowa for her doctorate in biology from Indiana University Bloomington. She is also a farmland owner of Prairie Quest Farm, a 120-acre grass-based livestock farm near McGregor, Iowa.

These are some of the gems of insight in Fred’s book. There are many more awaiting the reader. In other parts of the book, Fred discusses ideas on evolutionary biology and the extension of nourishment to human health and the well-being of current and future generations. These parts may seem more peripheral to some readers.

The book is written at a scholarly level with pages of footnotes and references. Some sections may be difficult to understand on first reading, but the book and ideas are worth following through to learn concepts that may be applied to or make sense of observations from one’s own farm. Readers may want to revisit some sections later to glean another layer of understanding.

Fred does not give suggestions for how to offer native plants in the diets of livestock in the more humid climate of the former prairie and savanna ecosystems of Iowa and the Upper Midwest, nor does he give examples of preferred native plants from these regions. Maybe that is a task for those of us living in this region to learn and figure out. Information from the book provides initial guidelines on how to start.

Mary Damm is a plant ecologist, most recently researching plants and soils of native and reconstructed tallgrass prairies in Iowa for her doctorate in biology from Indiana University Bloomington. She is also a farmland owner of Prairie Quest Farm, a 120-acre grass-based livestock farm near McGregor, Iowa.