For the Wangsness family, seeking advice from bankers, lawyers, tax pros and other experts was the next step in the process.

Many farm families looking to transfer the farm to the next generation know they need to enlist the services of professionals, but are unsure where to begin. 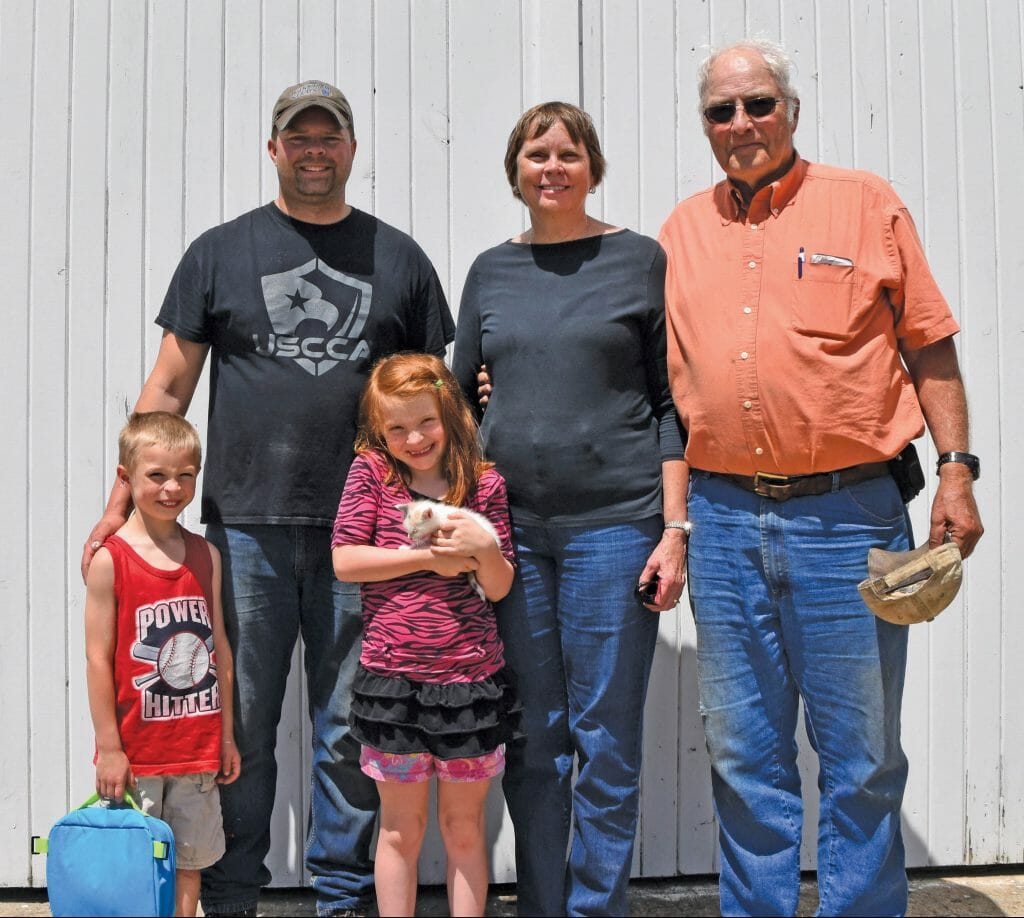 The Wangsnesses raise organic corn, soybeans, small grains, hay and layer chickens south of Decorah. Wayne’s family has farmed in the area since the 1860s, and he’s lived on the current farm since 1944.The farming spirit carried on to Ryan. “I can never remember not knowing I wanted to farm,” Ryan says.

When he was in high school, discussions about how he would farm began to get more deliberate and the family started having conversations about how they would make it happen. “We just always knew it was going to work,” Ryan says. “We worked together to set a goal, and then worked our way towards it.”

After attending college, Ryan came back to farm full-time with his dad. Wayne says those few years helped validate that transitioning to Ryan would work. “I didn’t want to expand or go into debt too much to start something that he was going to walk away from,” Wayne says. He adds that Ryan felt the same way – and those years made it clear Ryan was serious about farming. “Those were thin years and he stuck with it.”

At that point, the family began attending workshops on farm transfer. Wayne says attending workshops held by different groups was helpful – each offered a differing perspective. The family also started working with various professionals on the plan for bringing Ryan on board.

Carl Johnson of Vermazen Tax Service, an accounting firm in northeast Iowa, was one of those people. The company does a lot of farm accounting – tax returns, payroll, bookkeeping – primarily for farms that have a net worth in the $1 million to $10 million range. The company is also part of the Iowa Farm Business Association and offers farm business management services.

The hardest part about the farm transfer process for many families is talking openly about their vision for the farm. “If they haven’t talked about what their goals are or what their plans are, the time with us is the icebreaker,” Carl says. “So we talk about it. Sometimes farmers aren’t ready to change anything or do anything. They just need someone to bounce things off.”

When farmers come in to do their taxes, they get the conversation started. “We might discuss five or six things and give them another five or six things to discuss as a family,” Carl says. Vermazen Tax Service doesn’t draft legal documents, but the company shares some options with clients – such as ways other people have structured similar estate plans, so they can be better prepared when talking to an attorney.

“An attorney is very important, but most people are afraid to go in and have to make a decision,” Carl says. “Farmers like to think about things for years, and if they’re not sure, they’re reluctant to make a quick decision.”

Wayne says that, in his experience, lawyers excel at identifying potential problem areas. “They tend to ask things like ‘have you talked about this? What are you going to do about that?’” he says. “Clarifying our relationships with each other and each person’s responsibilities – those things are not to be taken lightly. Those are the things that can easily get to be a problem that people fight over.”

Kate Kohorst is a lawyer who practices in Harlan, in southwest Iowa. She counsels families to start planning for the future of the farm as soon as the next generation joins the operation. She also believes it’s important to communicate your intentions for an estate during your lifetime.

“I used to not think that,” Kate says. “I used to think ‘well, they’ll find out when the person dies.’” After working with many families, however, Kate’s perspective changed. “They may be unhappy, but it’s better to be unhappy when they’re alive and can deal with it.”

Because lawyers can be expensive, Kate says to be mindful of that cost when planning. You want to expedite the process and keep it as inexpensive as possible. “The more information you can give to the person that’s working with you, the better,” she says.

Before meeting with a lawyer, gather a list of assets, along with addresses and phone numbers for beneficiaries, and share any challenging situations or family members you’re worried about it. “We keep it confidential,” Kate says. “So the more we know, the better.” She adds that people should feel comfortable with their plan: “If it doesn’t pass the sleep test, it’s not a good estate plan.”

Owning a Piece of the Farm

A big piece of advice the Wangsnesses received from Vermazen was for Ryan to own a specific part of the operation. “I think the key was that I started my own farm,” Ryan says. “It wasn’t really that I was taking over Dad’s after he retired. I had mine and he had his and we tried our own things. So then you’re kind of growing that way, instead of taking over what was already there.”

“If they haven’t talked about what their goals are or what their plans are, the time with us is the icebreaker. So we talk about it. Sometimes farmers aren’t ready to change anything do anything. They just need someone to bounce things off.” – Carl Johnson

When it came time to expand to bring Ryan on board, Wayne wanted to make sure it was in an area where quality would come through, or where buyers associated quality with Ryan’s farm. That lesson – learned during the farm crisis of the 1980s – is one Wayne hopes to pass down to Ryan, and other farmers as well.

“If you have something that isn’t special, people don’t care where they buy it,” he says. “As a result, they buy from the seller that will sell at the lowest price.” In this spirit of this advice, Wayne and Ryan considered many options. Wayne admits they even considered adding ostriches to the operation.

Eventually, they settled on raising eggs for Organic Valley because it made practical sense and was something Ryan was interested in. Ryan also says the company has a stable program for eggs, and he likes the steady income. “We were doing organic crops and we wanted a way to add value to them,” Ryan says. “With egg layers and dairy, you get a check every two weeks.” In contrast, he says farmers raising beef cattle get paid every 1.5 years, or annually with row crops.

The Wangesses’ banker was also important when it came to planning for the new enterprise. In addition to advising on what capital they needed, Wayne says their banker helped identify risks associated with the new enterprise and how to cover those risks through insurance. “If Ryan would have died, I’d have been left with a mess, because it was his deal,” Wayne says. “I didn’t really want to do chickens myself.”

Ryan’s Farm Service Agency loan officer was another crucial resource. His loan officer helped guide him through good record-keeping practices and the process of making good decisions. FSA farm operating loans and FSA guaranteed farm loans can also help buoy beginning farmers. “I don’t think I would have been able to do it without FSA,” Ryan says. His advice for working with them? Be prepared. “Have a really good plan, have your numbers figured out on what you’re expecting – either records or planned financials.”

“I don’t think I’d have been able to do it without FSA.” – Ryan Wangsness

Looking back, Wayne says the easy part of farm transfer was bringing Ryan on board, because it was just a matter of figuring out how to generate more income. The next step was writing their will, a task that was less straightforward and more emotional. “We all had a little reluctance to do it,” he says. “If I’d have died at 50, it would have never happened. As time went on, it became obvious that there needed to be something done.”

Start Planning Early – and Stick With It

Carl has seen many families go through the farm transfer process, and says the Wangsnesses are a good example of how to do it right. “Anyone in farming with those types of questions would really benefit from taking the Wangsnesses out to dinner and picking their minds about it,” Carl says. “They communicate well and they don’t have ulterior motives.”

Starting the process can be difficult, even for families that agree on farm transfer plans, talk regularly and generally get along well. Wayne and Cheryl have four children: in addition to Ryan, they have two daughters and another son who is disabled and can’t participate in the farm. Ensuring continuity of the farm is first and foremost for Wayne and Cheryl, and this has influenced their farm estate planning. They want to provide for their two daughters while fairly recognizing the work Ryan has put into the farm.

“We’re trying to be helpful to our daughters, but it seems unreasonable that they should be anywhere near one-third, because the net worth of Cheryl and I would be considerably less if we would have quit operating 20 years ago,” Wayne says, referring to when Ryan joined the operation. Wayne says his daughters have successful careers, and their spouses also work – a fact that eased the task of figuring out how to fairly split the estate. “It’s not a case where they need every last dollar.”

Ryan adds that his siblings have been supportive throughout the process. “They figure whatever Mom and Dad think is fine,” he says. “The farm is Mom and Dad’s, so Mom and Dad get to decide what they want to do with it.” Wayne cautions that deciding on a farm transfer plan didn’t happen overnight.

“The conversations took place over a long period of time as the girls came to visit, and as we went to visit them,” he says. He also recognizes that estate planning is always a work in progress. “Times change, circumstances change,” Wayne says. “I hope we can revisit it without any conflict.”

Measuring Conservation on the Farm