Adding small-grains species like oats, wheat, rye or barley to a crop rotation is an effective way to biologically control weeds, grow a bigger or more diverse cover crop that can offset feed or fertilizer costs and spread labor throughout the year.

Once common on farms across the Corn Belt, the acres planted to these crops fell sharply over the decades – and with it, the infrastructure and markets farmers once relied on.

Today, the absence of obvious markets makes it hard for even the most forward-thinking farmer to incorporate small grains as an enterprise. Practical Farmers of Iowa’s board of directors and farmer membership observed these challenges and tasked PFI with generating more market opportunity for small grains in Iowa and the Corn Belt.

From 2016 to 2019, supported by Conservation Innovation Grants through USDA’s Natural Resources Conservation Service, we have worked to this end. Our strategy has been twofold: build farmers’ capacity for growing greater quantities of high-quality small grains while connecting with key market players.

We started by developing marketing pilot projects with food and beverage companies that use small grains in their products, guided by the premise that as farmers produced more food-grade small grains, the companies would find it logistically feasible to purchase more of these crops from farmers in Iowa and the Corn Belt.

On the farmer side, we worked to address two other key barriers to growing small grains: lack of knowledge and cost. We launched a small grains peer network and offered a suite of educational programming. In 2017, we debuted a cost-share program for farmers in Iowa, Minnesota and Wisconsin who expanded their two-year corn-soybean rotation by adding a small-grains crop followed by a leguminous cover crop over a year of production.

Farmers used the funds to grow barley, oats, rye, triticale and wheat, and used the program’s flexibility to take different approaches to their cover crops. Some frost-seeded clover or drilled alfalfa with the growing small-grain; others waited until after small-grain harvest and seeded a diverse mix that included grasses, brassicas and legumes. In total, 69 farmers planted 3,650 acres of small grains, supported by cost-share funds over three growing seasons (2017-2019). 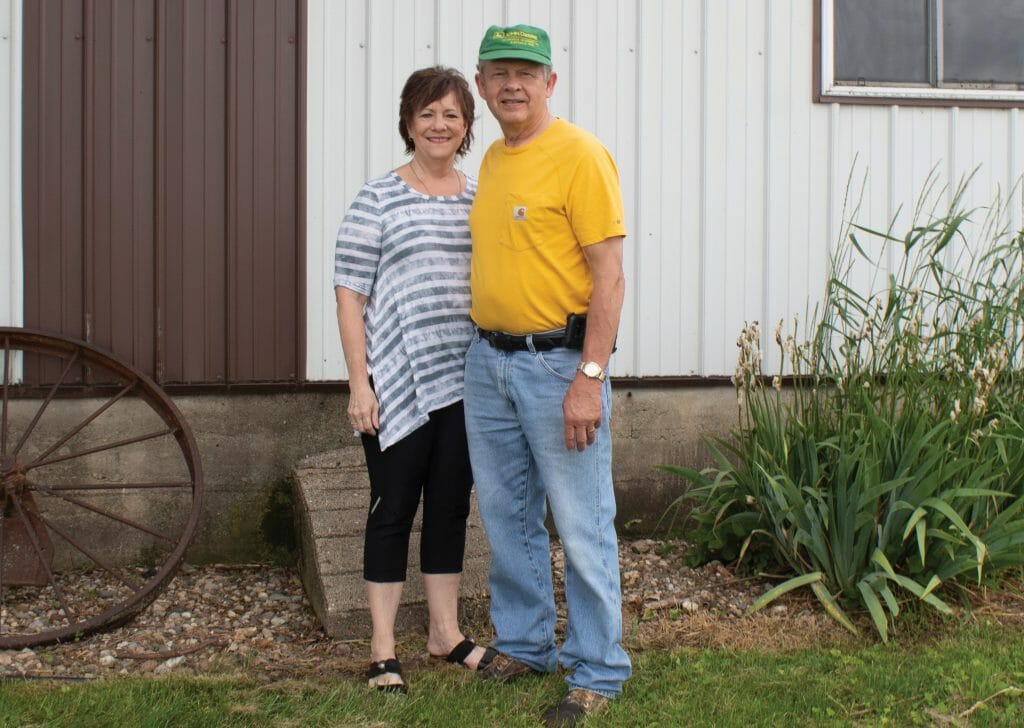 Denise and Wayne Brunsman stand on their farm near Dyersville.

Initially, some farmers were motivated to plant small grains for weed management and agronomic benefits. “I had waterhemp problems that motivated me to plant oats,” says Wayne Brunsman, a 2018 cost-share participant who farms near Dyersville in northeast Iowa. “Then with two cuttings, one to harvest oats in July and another cutting later that summer for hay, I could get ahead of the weeds.”

Wayne also found that the oat fields were some of his most profitable acres in 2018. His expenses were relatively low – only $201 per acre, primarily seed costs and field passes. And thanks to multiple revenue streams from his diversified rotation – oat grain sold to Grain Millers; oat straw; and hay from his cover crop, which he sold to neighboring dairies – Wayne’s revenue was nearly $724 per acre that year. His oat and cover crop fields alone netted nearly $523 per acre.

“I had waterhemp problems that motivated me to plant oats. Then with two cuttings, one to harvest oats in July and another later that summer for hay, I could get ahead of the weeds.” – Wayne Brunsman

Besides the economic benefits, extended crop rotations reduce erosion rates by keeping soil covered for more of the year and eliminating some field passes. They also lower greenhouse gas emissions by reducing the amount of synthetic inputs required. Major food and beverage companies interested in supply chain sustainability are enthusiastic about these environmental benefits.

“Coming into this spring, the oats looked more profitable than soybeans, between the [oat] straw and our oat contract.” – A.J. Blair

In 2017 and 2018, PFI and Sustainable Food Labs, our grant partner, co-hosted over 50 representatives from major food and beverage companies to highlight the ecological benefits of extended rotations and emphasize the lack of markets for small grains in the Corn Belt. Through these gatherings, we made a critical connection with Oatly – a Swedish company that makes dairy replacement products from oats.

In 2017, Oatly launched its products in the U.S. and was going to need a lot of oats. “We take the whole oat groat after it’s been de-hulled, then crack it a bit and add enzymes to form the base for our oat milk products,” says Sara Fletcher, communications and public relations lead with Oatly U.S.

In 2019, Oatly launched a pilot program to source some of its oat supply from growers in the Midwest. In this program, oats are sold and processed via the Grain Millers facility in St. Ansgar, Iowa. Why the Midwest? “It’s all about connections,” Sara says. “We’re friends with Grain Millers and then we got to know PFI and Sustainable Food Labs. As we’ve grown in Sweden, our demand for oats has grown dramatically, so we know the same will be true here. But what’s great is that what we’ve learned in the Midwest is on of the areas in the U.S. where oats can be grown the best.”

Oatly has structured the program so growers have a guaranteed market for three years with forward contracting at the market value of oats before oat planting; the program also provides a price floor. In addition, farmers have access to Practical Farmers cost-share funds at $25 per acre to plant a cover crop following their oats. 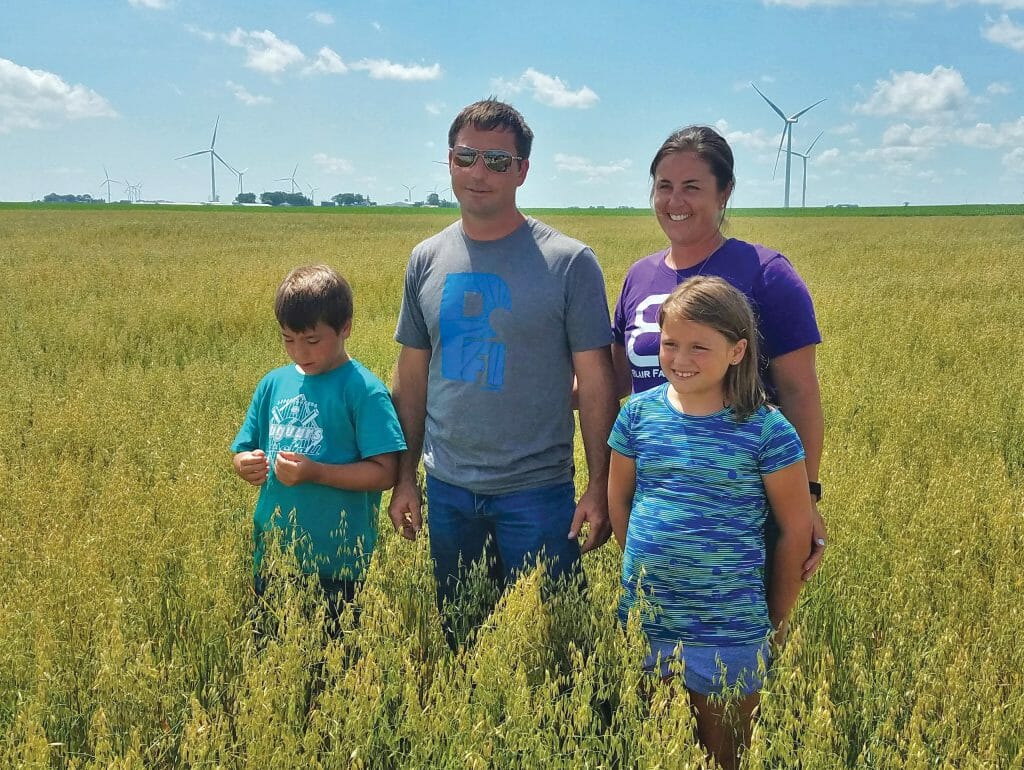 A.J. and Kellie Blair stand in one of their oat fields with their son, Wyatt, and daughter, Charlotte.

Kellie and A.J. Blair, PFI lifetime members near Dayton, leapt at the opportunity to grow another crop on their farm and signed up to grow oats as part of this pilot program. “Coming into this spring, the oats looked more profitable than soybeans, between the [oat] straw and our oat contract,” A.J. says. The oats also integrate well with their livestock, Kellie says, which can eat oats that don’t meet food-grade specifications.

Another perk is how an oat crop can benefit their non-GMO seed bean production. “We can’t control waterhemp or ragweed in non-GMO beans with herbicide options very easily,” A.J. says. “Oats give us more options with herbicides we can use in that year, and by breaking up weed cycles for those problem weeds.”

For Oatly and the Blairs, the arrangement is a win-win. Both gain access to new markets – the Blairs to one that supports further farm diversification and another income stream, and Oatly to a new supply region that can help the company expand. Oatly also gets to build personal relationships with farmers and has the satisfaction of knowing it’s supporting profitable farm businesses and environmental stewardship, values that are at the core of the company’s mission.

“Direct contact is better for everyone in the system,” Sara says. “We can talk directly to the farmer about varieties and specifications.” She adds that the environmental impact of oats is lower than some other non-dairy milks: “All [plant-based] milks have pluses and minuses in terms of their climate impact but because they’re pretty easy to grow, we know oats on the whole are pretty good.”

Our Plans for the Future

Practical Farmers of Iowa members have a big vision for agriculture in the Midwest, including markets for a wider diversity of field crops. Steering something as big and complex as markets takes time, but we’re seeing feedback that we’re on the right track. However, as we’ve worked with farmers to sell their small grains over the past few years, we’ve realized that creating markets just for food-grade small grains is not enough to remove the risk of growing these crops.

What’s needed are robust alternative markets if the grain does not meet the high standards for human consumption. Because these grain qualities often depend on weather, there will always be quality characteristics farmers can’t control, and grain that doesn’t meet the standards to sell into food markets. Thus, over the next several years, we’ll be working more on developing secondary markets, like animal feed and cover crop seed, to complement our food-grade market development.