“Ecosystems are more than the sum of their parts. They are more than collections of species or genes; they are functioning, synergistic wholes, processes as well as parts, and many are in decline worldwide.”
— Paul Mugge, “The value of biodiversity,” the Practical Farmer, Spring 1998

Paul Mugge grew up on a farm near Sutherland, Iowa, that his parents purchased when he was 1 year old. As a college student at Iowa State University, he chose the toughest curriculum he could find: aerospace engineering. “I wanted to prove that I could do it,” Paul says. But while getting his degree, he learned about agriculture. “I was fortunate to be in the honors program, which allowed me to set my own schedule,” Paul says. “My engineering advisor thought that I was nuts for adding agriculture classes.” Paul graduated with a degree in aerospace engineering in 1974, and moved to Seattle to work for the Boeing Company.

Karen Mugge grew up with an Army dad, so she regularly moved all over the world. When her dad retired, the family settled in Longview, Oregon, 50 miles north of Portland. Paul and Karen met at Boeing. They fell in love and got married. Not long after, Paul’s dad decided to retire from farming. “Coming back to the farm was always a possibility for me, but I wanted a challenge and to see the world,” Paul says. “I appreciated the experience of being in the Pacific Northwest.”

Karen and Paul returned to Iowa in 1976. “Let me tell you, that first year was something,” Karen says. She learned to drive the tractor and acclimated well to farm life. Until recently retiring, Karen also worked as a home health aide, and Paul worked as a math and science teacher.

Paul was part of a ridge-tiller club in northwest Iowa. PFI co-founder Dick Thompson came up to talk to the club around 1988, about three years into PFI’s existence. Paul and some others from the ridge-till group joined Practical Farmers of Iowa on the spot. “Dick was a great presenter and talked about ridge-till on his farm,” Paul says. “But the impactful thing he talked about was doing on-farm research and all of the things he researched over the years. Research was sort of my thing. I thought I could do research, too, and that it would be kind of fun.”

Paul could indeed do research. In fact, he holds the record for most PFI research trials conducted by a cooperator. In 2013, he was one of the inaugural recipients of PFI’s Master Researcher Award, which recognizes the efforts of those who have conducted at least 20 on-farm trials with PFI. To date, Paul has participated in 65 trials. Paul has also shared knowledge with others at 22 field days he has hosted on his farm over the years.

“PFI gave me the confidence to become organic. Just to see other people doing it – and that it actually worked, that you could farm without herbicides or any anhydrous ammonia – and to have people you could contact if you have questions, is vital.” – Paul Mugge

Paul served on PFI’s board of directors from 1990 to 1998. He relishes being surrounded by people he holds in high esteem. “Dick Thompson was an idea person,” he says, “and Larry Kallem knew everything about everything.” Dick and Sharon Thompson, along Larry Kallem, are PFI’s co-founders. “The giants of the industry, Ron Rosmann, Vic Madsen and Tom Frantzen, were all part of the board.”

Paul says notable accomplishments of the early days include research on ridge tillage and ridge tillage without herbicides. “We worked together a lot on ridge-till research, plus shared information on equipment and practices. That has really impacted my farm. I still ridge-till today because of that.”

Early PFI research cooperators also worked with Dr. Alfred Blackmer at ISU on the late-spring soil nitrate test that lets farmers more accurately gauge nitrogen needs. “Our research showed that, in most cases, you don’t need that much nitrogen,” Pauls says. “Almost all of those early cooperators who experimented with ridge-till without herbicide went on to become organic farmers.”

Rick Exner, who worked for years as the farming systems coordinator for Iowa State Univeristy and served in a dual role as an early PFI employee, played a big role in the early research. “As farmers, we didn’t know how to set up scientific experiments that meant something. That was Rick’s thing,” Paul recalls. “He was the scientist in residence that kept us on track and helped us do it right so the results would be meaningful at the end of the day. He worked at it pretty hard, and we’re a tough group of people to get to comply.”

Paul has farmed organically for almost 20 years, and says the farm has seen significant changes since he took the helm. “This farm has gone through quite an evolution from the way my dad farmed – with moldboard plowing, herbicides and chemical fertilizers and the whole industrial agriculture approach – to completely organic.”

While Paul describes himself as a “lifelong environmentalist,” he credits his involvement with PFI – the support of other members, the ability to network with and learn from them – with encouraging his transition to organic. “PFI gave me the confidence to become organic,” he says. “Just to see other people doing it – and that it actually worked, that you could farm without herbicides or any anhydrous ammonia – and to have people you could contact if you have questions, is vital. That’s the same today. The ability to network with other people that are doing it – there’s some real value there.”

Paul thinks Practical Farmers’ member-led approach is important. He has attended many PFI field days, but a recent field day at Vic Madsen’s farm stands out to him as one of the best. “Some PFI members asked to see cultivators on an organic farm, so PFI sought out a farm that could host,” Paul explains. “This bottom-up kind of approach is why this field day really worked, I think. Weather was horrible – it rained 3 inches during the field day, so we didn’t get to look at much of anything. But we had a great discussion for several hours.”

Being in involved in Practical Farmers of Iowa for 30 years, Paul has seen how much the organization has grown. While he misses the intimacy of the smaller PFI, he also knows the growth and broader focus are important. “In the early days, PFI was a small, intimate group of just a few of us that knew each other pretty well,” Paul says. “At the annual meeting, basically cooperators would present their results and scientists would come in and ask for farmers to participate in their projects. Now, it’s a lot larger group, a much more diverse group. But it is obviously meeting a need.”

He also sees an ongoing need for the work PFI is doing to connect and support farmers. “Agriculture in this state still isn’t where it needs to be or should be. There’s still a lot of work to do, and a lot of innovation to be done out there,” he says. “Farmers are good at innovation, and there are a lot of things to be tested and experimented with to reduce our environmental footprint and make healthier food.” 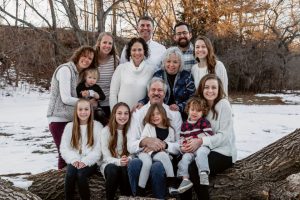 At the same time, Paul has hope for the future of Iowa’s agriculture. He believes it’s easier now that when he started farming to become more sustainable or move to organic farming. “There are a lot more people trying sustainable practices who are willing to share their knowledge, and there are a lot of resources.” But he warns that people need to do their homework. “You have to make use of all the stuff out there,” Paul says. “The PFI model allows you to fine-tune things for your own situation. It allows you to research things that are applicable and appropriate for your farm.”

Paul and his family have a long-term vision for the farm where profit is not the sole objective. A profile of the Mugges published in the winter 1996-97 issue of the Practical Farmer shows the continuity of this vision – one where profit and stewardship are mutually inclusive, supporting the farm into the future: “I want to end my farming career with the soil and its inhabitants healthier than when I began,” Paul said in the article. “Implied in this vision, of course, is that I be profitable enough over the next 20 years that I am still the steward of my farm.”

Graze More Instead of Owning More