Lee Tesdell is proud of his farm’s long history and heritage. Purchased in 1884 by his great-grandfather, he is the fourth generation to steward Tesdell Century Farm, near Slater. As a non-farming landowner, Lee is also outspoken about the need for farmland owners to collaborate with their farming tenants on conservation.

Together with his tenants, Charles and Mike Helland – who raise row crops on 60 of the farm’s 80 acres – Lee has modeled what positive collaboration can do to improve soil, water and wildlife habitat in Iowa. In addition to using terraces, no-till, cover crops and limited or no tillage in the fall, he has also established a bioreactor, a riparian buffer, a saturated buffer and prairie strips on his farmland. 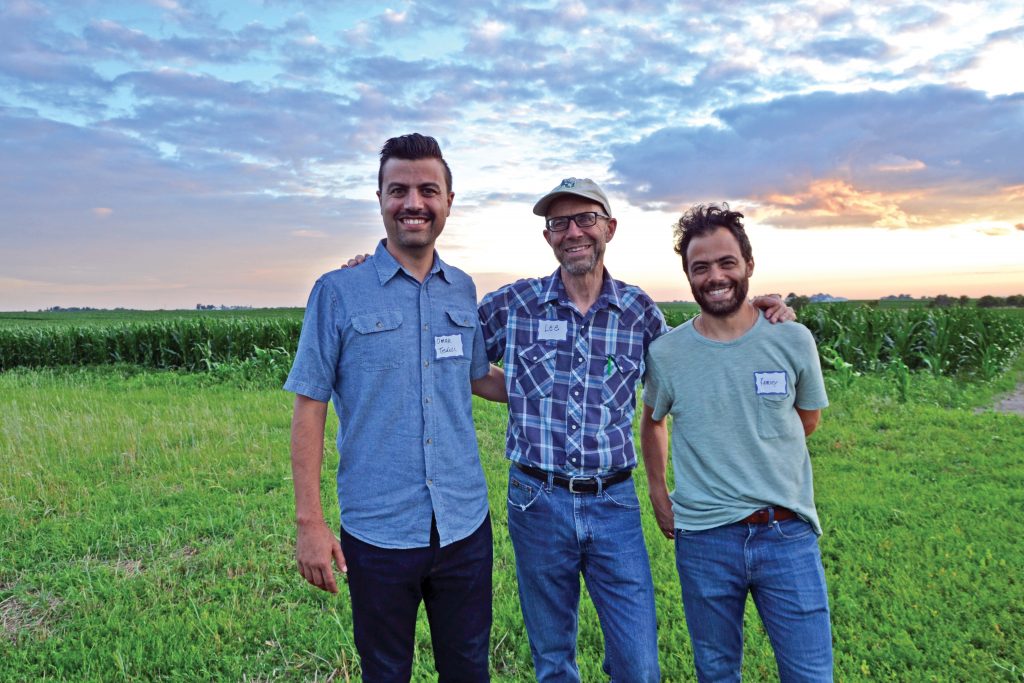 Lee Tesdell (center) with his sons Omar (left) and Ramsey after the award presentation and field day on July 10. Omar and Ramsey are both involved with the farm and discuss management plans with Lee.

This commitment to managing his land with long-term sustainability in mind led to Lee’s selection by Practical Farmers’ board of directors as the 2019 recipient of PFI’s Farmland Owner Legacy Award, which was presented at a ceremony and field day near Slater on July 10 that was attended by nearly 90 farmers, landowners, students, families and others interested in learning about conservation on working farms.

The Farmland Owner Legacy Award is granted annually by Practical Farmers of Iowa to landowners who use their land to help the next generation get started, advance land stewardship and promote long-term sustainability of farm businesses, environmental quality and rural communities. The point of the award is to highlight the important role non-operator farmland owners can play in the future success of sustainable agriculture.

Lee credits the ability to conserve resources – soil, water, nutrients, habitat, energy and more – to partnerships. “This work on my farm wouldn’t be a reality if I didn’t have a neighbor like Mike,” Lee says. The Helland family has been farming Lee’s land for nearly 40 years. Nick Helland, Mike’s son who also farms Lee’s land, says that one of the biggest advantages to farming Lee’s ground has been the ability to experiment with new conservation practices.

“We call it the Tesdell research farm,” Nick says. “We’ve had a chance to use this as a playground to see what works.” The Hellands have been able to show the results of using no-till and cover crops on Lee’s farm to other landowners they rent from – which Nick says has helped convince those landowners to do conservation practices on their farms.

“We’re trying to show other landowners and tenants in the area that we can work together,” Lee says. “It’s not just a matter of me getting a check in December.”

“Some of the things Lee does on his farm don’t provide any benefit to him. They truly benefit other people, and I think that’s a great message about responsibility as a farmland owner, and your responsibility to your community as a whole.” – Adam Kiel

Lee is also a firm believer in the need for landowners to share the cost of conservation practices with their tenants. He and Mike split the bill on cover crop seed 50-50. Lee says he doesn’t get involved in crop production decisions, but thinks they have a joint responsibility when it comes to conservation. “It’s important for us to work together on paying the bills, too,” Lee says. “I think we owe it to future generations to do a little better job on soil health and water quality.”

Over the years, Lee has also worked with numerous organizations on his land stewardship goals, most of whom had representatives at the field day he hosted after the award ceremony.
Todd Hammen of Iowa Energy Alternatives discussed the photovoltaic solar arrays Lee has installed on the farm to conserve energy. Thomas Fawcett of Heartland Co-op talked about the use of precision agriculture, and the potential use of drones, on the farm. Lisa Schulte Moore and Tim Youngquist, both from Iowa State University, discussed their work with Lee to get prairie strips established on the farm.

And Adam Kiel of the Iowa Soybean Association talked about Lee’s collaboration with ISA to install a saturated buffer. This type of buffer is similar to a regular riparian buffer, but uses underground pipes to channel water from the tile lines of crop fields into the buffer, holding it there for a time before entering a stream.

Riparian buffers usually include a mix of grass, shrubs and trees, and they offer numerous conservation benefits. Besides providing habitat for a variety of wildlife species, shade from the trees also helps cool the water, improving the habitat for aquatic species like fish and invertebrates. If properly designed, the buffers can also filter sediment and nutrients from water flowing off the surface of crop fields.

But most water entering streams comes through subsurface drainage tiles, bypassing the buffer completely. That’s where the saturated buffer comes in. Instead of dumping water directly into the stream, saturated buffers spread out the tile flow along the length of a buffer, where soil microbes and plant roots take up excess nutrients like nitrate. “It’s a super efficient practice, very cost-effective,” Adam says. “Some of the things Lee does on his farm don’t provide any benefit to him. They truly benefit other people, and I think that’s a great message about responsibility as a farmland owner, and your responsibility to your community as a whole.”

Conserving Farmland for the Future

Lee works as a professor of English at Minnesota State University in Mankato, Minnesota, where he teaches courses on technical communication – his partner, Cindy Hemingway, lives on the farm in Slater, and he comes back every weekend. But he says he developed an interest in the outdoors at an early age. He participated in 4-H, enjoyed learning about agriculture and “had a sense it was important to know where your food comes from.” As he learned more about the environment and how food is produced, Lee became convinced that more needed to be done to conserve the land.

“If we’re going to be able to sustain a reasonable kind of food production system into the future, we’re really going to have to change our practices,” Lee says. “And that probably means less row crops and more small grains and other kinds of crops. I think all those things are important to a sustainable agriculture future.”

While doing his part to protect the landscape is important to him, his family is first in mind when he thinks about the future. His sons, Omar and Ramsey, are both involved with the farm and attended the field day with their families. “I like the idea of leaving it [the farm] in better condition than when we started out, for future generations,” Lee says. “My sons and my grandchildren, I hope, will continue conservation work here.”

“It’s important for landowners and tenants to work together, to respect the land together and to have a good working relationship.”
– Lee Tesdell

“We are thinking about ways we can keep this momentum going,” Omar says. “If we can get more plant cover, more vegetative cover on the landscape over a longer period of time, it will show great returns both environmentally and economically.” As they look to the future, Omar says they’re thinking about raising Kernza, a perennial grain crop developed over the past few decades at the Land Institute that has seen more market growth in recent years. “General Mills and some of the large food companies are investing in it now,” he says.

Lee adds: “I think it’s important to do what we can while we’re here. And hopefully we’re being a good example in the neighborhood. Mike and I talk about that quite a bit, and Mike always says ‘our neighbors are watching’ – so we hope we’re having a good effect.”

Preventing soil erosion is one of Lee’s top conservation priorities. A few years ago, he had a farm advisor calculate the cost of erosion on his farm and how different farming practices can help.
“If you put a dollar figure to 1 inch of topsoil that you’re either losing or not losing, you’re talking some serious money after a while,” Lee says. “People who are crunching numbers could see pretty quickly that both no-till and cover crops will actually save you a lot of money.”

Lee had been interested in edge-of-field or semi-permanent conservation practices and infrastructure for a long time, but it was Mike who first suggested cover crops. Mike and Charles had been doing no-till for nearly 20 years, and were interested in giving cover crops a shot. They started out with tillage radishes, about 10 years ago. “We didn’t get a good result, but it was kind of interesting,” Lee says. He started splitting the cost of planting cover crops with the Hellands, and they also started using more mixes that contain cereal rye – which has continued to show good results.

For Lee, cover crops address several of his conservation priorities. They keep the ground covered when corn and soybeans aren’t growing, suck nitrate out of the soil that could otherwise end up in streams and lakes and add more biomass to the soil, improving soil health. And though it’s not relevant on his farm, Lee also likes that cover crops can be a good source of cattle forage for livestock farmers.

“If you want to start somewhere on your farm with conservation, start with cover crops,” he says, “because we get some really good benefits for cover crops, for really not a big cost.”

Lee’s advice for other landowners? Learn about the things you care about on your land. “Educate yourself, look at the research,” he says. “Iowa State University, Practical Farmers of Iowa, Joel Gruver over at Western Illinois, people at Minnesota and others are doing good research on conservation.”

After learning some of the specifics, he says it just takes respect and dialogue. “Meet with your operator and see what you can come up with,” Lee says. “It’s important for landowners and tenants to work together, to respect the land together and to have a good working relationship.”

Who owns the farmland?