Iowa is the number one hog production state in the United States. Most hog diets in Iowa are made up predominantly of corn and soybean meal. But what if a hog’s diet could drive a more diverse crop rotation that met more management goals for the farmer? Long-time PFI member Tom Frantzen set out to answer this question by conducting a feeding trial with hybrid rye in his grow-finish pigs.

He hoped that the hybrid rye would provide weed management and soil health benefits for his organic crop rotation, while allowing him to continue to fatten his hogs for market. On our April shared learning call, Tom shared the results of his trial which showed that pigs maintained essentially the same rate of gain when 50% of the corn in their ration was substituted with hybrid rye grain.

Tom Frantzen has farmed near New Hampton in northeast Iowa for the past 46 years – about half of which he has been certified organic. In the beginning of his organic career, Tom practiced a five-year crop rotation of corn-soybean-spring small grain-hay-pasture. After pasture, he applies manure and tills the pasture before planting corn again.

“We had two problems that we developed,” Tom says, “One was that that heavy disruptive tillage in April is very weather dependent and introduced erosion concerns. The second problem was far worse – giant ragweed absolutely invaded our organic cropping practices, so bad that in the last eight years we’ve only had two successful spring small-grain crops.”

When the ragweed took over they would harvest the oats, weeds and all as silage and feed it to the cows, but this left them without straw for bedding in their farrowing operation. Something had to change.

In 2016, Tom caught wind of a new crop on the market – hybrid rye. A company called KWS had recently commercialized hybridized rye seed. Cereal rye is planted in the fall, grows a bit, goes dormant over the winter and then begins greening and growing again in the spring and culminates in a rye grain crop in late June or July. But with an open-pollinated rye variety you would expect yields of only 40 to 60 bushels per acre.

Despite the water quality, soil erosion and weed control benefits of keeping the soil covered with a living plant more of the year – the low yields of an open-pollinated rye weren’t economically attractive to grow as a main crop in the rotation. Hybrid rye, like corn, has considerable hybrid vigor which can result in yields in excess of 100 bushels per acre. 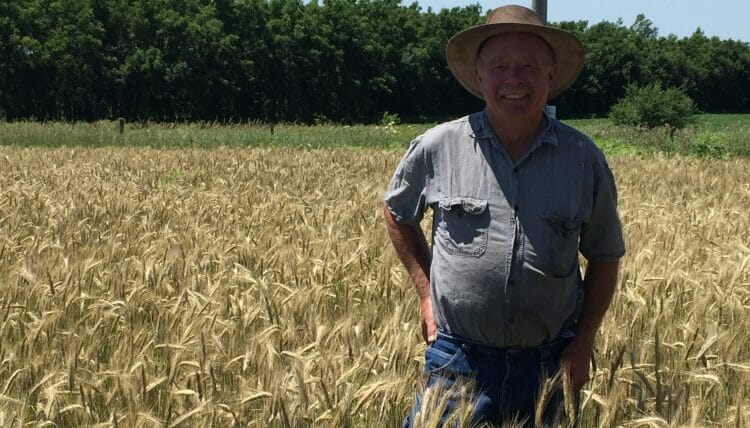 Tom decided to take the plunge and planted his first crop of hybrid rye in September of 2016. The addition of hybrid rye added a year for a total of a six year rotation: corn-soy-small grain-hay-pasture-hybrid rye. Now he terminates his pasture with tillage in September, a drier time when tillage can be conducted more reliably and with less risk of soil compaction. “By doing [my tillage] in September and immediately planting hybrid rye, I have good erosion protection and it looks nicer than my lawn by October 15,” Tom says.

After rye harvest, Tom plants a multi-species cover crop that he grazes with his cattle herd. The mix winter-kills so he can plant corn in the spring without having to conduct heavy tillage like moldboard plowing to terminate the cover crop.

Tom harvested hybrid rye on July 23, 2019. In this photo you can see green strips from another trial Tom conducted on comparing interseeded and summer-seeded green manure cover crops in the rye.

“Rye is getting us in front of our infestation with ragweed,” Tom is happy to report. The fall planting date of the hybrid rye puts it in a good position to compete with giant ragweed which is a summer annual. “Rye gets a good jump on it and out-competes it in the early stages of the season,” Tom says. “Ragweed does emerge but in June, so it gets killed at rye harvest before it goes to seed and without any hand weeding expenses.”

By July 2017, Tom had rye combined and in the bin and was faced with the question of what to do with it. Tom had already been conducting on-farm trials with grow-finish pigs at that time and thought that that would be a good way to test adding hybrid rye into his operation.

In September of 2018, he began feeding two different rations—one was a standard organic hog ration that was mostly corn and soybeans – the other replaced 50% of the corn in the ration with hybrid rye. This worked out to be about 37% of the ration overall as hybrid rye. The only other change between the rations was adding 20 pounds of organic soybean oil per ton of feed in the rye replacement diet to ensure that the energy levels were comparable.

The ration was fed to two different pens of animals for three different feeding periods spaced out between September 2018 and December 2019 – you can read more about the trial design in the forthcoming research report about Tom’s study. 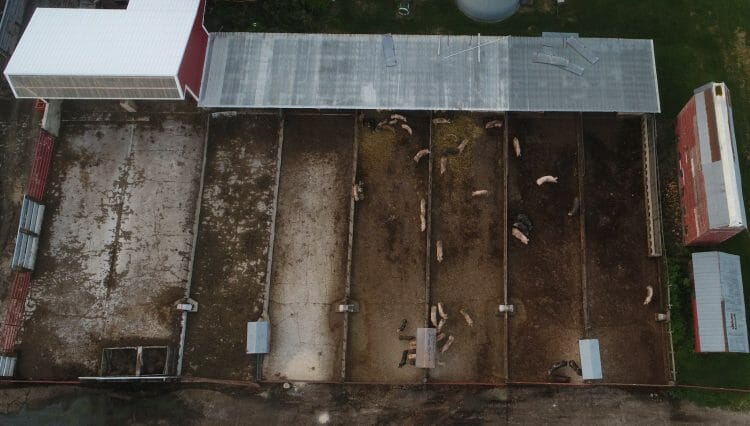 An overhead shot of Tom’s pig pens where the feeding trial was conducted.

Across the three replications of the feeding trial, the corn-soy pigs averaged 1.64 pounds of gain per day and the rye pigs gained 1.61 pounds per day. This translated to 3.75 pounds of corn-soy feed per pound of gain and slightly lower 3.7 pounds of rye feed per pound of gain. These results show that pigs perform extremely similarly between the two rations. Moreover, the hybrid rye ration was actually slightly cheaper.

Because Tom grows all of his own feed, he based his estimation of dollars per pound of ration on his production costs for corn and rye. Rye has more tillage costs because it follows pasture, but the rye seed costs about half of corn seed costs ($46 vs. $96 per acre).

Tom also doesn’t buy crop insurance for rye and he has to hire a crew to hand weed for ragweed in his corn ($80 per acre) which he doesn’t have to do for rye. Finally, he doesn’t have to dry his rye grain while lately he has had to dry his corn. In total he finds that adds up to about $200 per acre less to grow rye than to grow corn. Once we figure these numbers in the ration, the corn-soy ration costs $0.59 per pound while the hybrid rye costs $0.56.

When Tom began the second feeding period with new 2018 crop, he noticed lower intake. So, Tom submitted some samples for testing and it showed that there were toxins in both the rye and corn. Specifically, there was Vomitoxin (or DON), Zearalenone and ergot caused by fungal diseases on the rye. When ordering samples for toxins in grain, it is important to order results that show you the concentration in parts per million or parts per billion.

This allows you to correctly calculate you next steps whether that it blending grain clean grain and grain with toxins to push the toxin level below the harmful threshold or feeding a binder. Based on his test results, Tom began feeding a toxin binder at 3 pounds per ton, specific to the toxins they were trying to address and saw intake recover to normal levels.

Another important observation that Tom made was that the hogs on the rye diet slightly outgained the corn-soy diet hogs during the extreme cold weather Iowa experienced in February 2019. Usually temperature extremes lead to lower feed intake and slower gains as more of the animal’s calories are diverted to basic maintenance to survive. 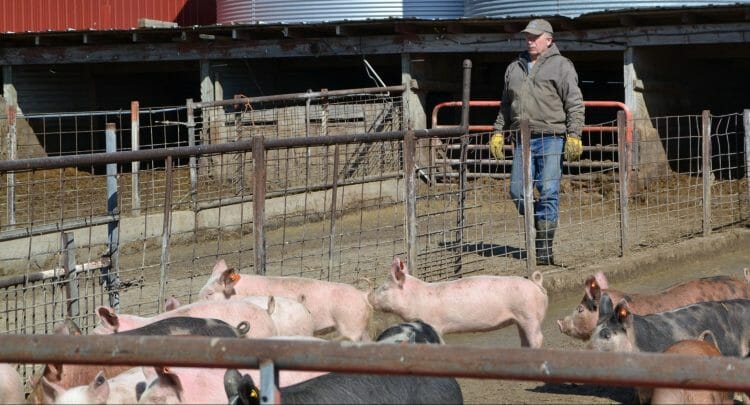 As for milling the rye and blending it into rations Tom says, “I have no fear of storing or processing the grain at all; there’s been no difficulties.” He observed that it grinds harder than corn but easier than barley. Tom used a hammer mill with the same screen size as corn (3/32) this resulted in rye particles of 750 microns. “You are likely to get flour-y with oats and wheat and barley just breaks,” Tom says. “Rye grinds pretty well by comparison!”

Looking back at his experience and what he’s learned by conducting this trial through PFI’s cooperators program Tom is pleased, “I feel good about diversifying the landscape by including these grains in pig diets.” To join future shared learning calls and get resources on small grain production delivered to your inbox sign up for our monthly small grains newsletter.