In philosopher Harry Frankfurt’s book “On Bullshit,” he claims that bull (abbreviated for tact) is information intended to persuade without regard for truth. The tendency toward bull is encouraged by the widespread view that a responsible citizen ought to have an opinion about everything. Harry says, “You can’t know very much about everything, so your opinions are likely to be bull.”

To survive this social pressure of being experts at everything, sometimes we pick a group or groups and adopt their beliefs. Subscribing to a platform of “truths” exacerbates both the spread of bull and polarities within our culture. The world is far more complicated than any simplified, stripped-down version of truth. PFI co-founder Dick Thompson said, “You can’t buy the answers in a bag.” Finding sound information is complicated and requires hard work.

In 1985, Practical Farmers of Iowa’s founders Larry Kallem and Dick and Sharon Thompson, along with inaugural members, recognized the need for a framework for information exploration. While it would be convenient to buy the answers in a bag, not only is that impossible, it is uninspiring.Practical Farmers was created to help farmers work toward a resilient agriculture through investigation and information-sharing. PFI equips farmers with tools to conduct research and use evidence-based facts to drive decisions. 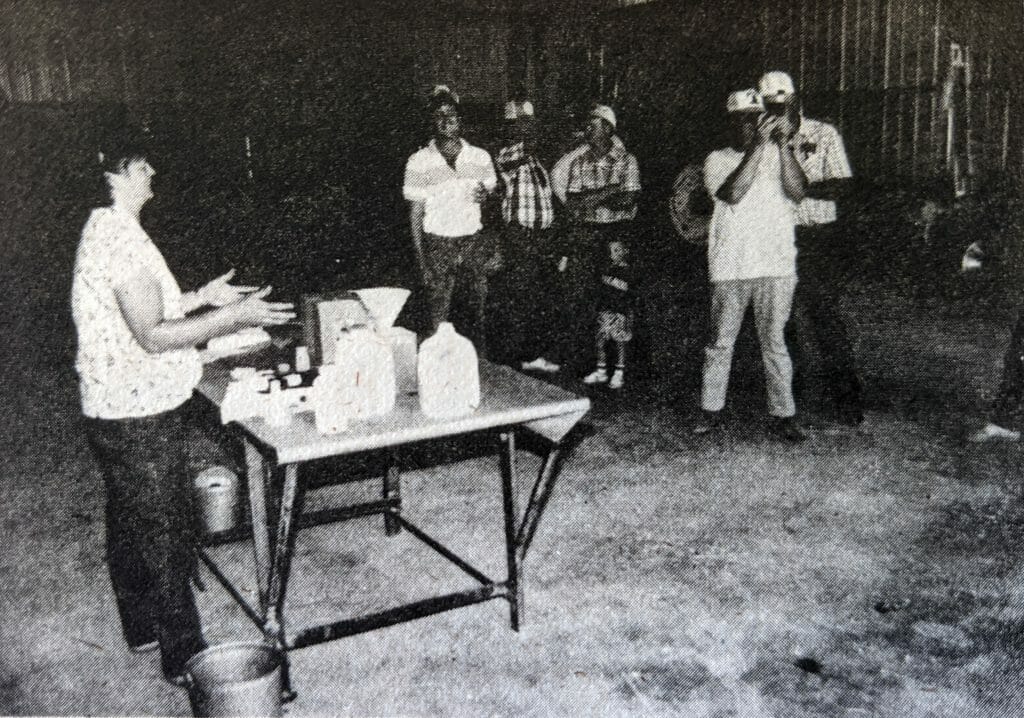 From the PFI archives, Cindy Madsen, left, explains to visitors how to use the late-spring nitrate test kit, developed by ISU agronomy professor Fred Blackmer, to take their own nitrate readings. This photo appeared in the Winter 1990 issue of “the Practical Farmer” newsletter.

Harry believes bull is more prevalent due to amplified marketing in our society. We are continually being sold products, candidates, programs, policies and more. “Once you start out supposing your object is to sell something,” Harry says, “your object is not to tell the truth but to get them to believe what you want them to believe about it.”

Fortunately, PFI’s founders recognized the risk of salespeople and made it clear in our bylaws that PFI was not to be a selling apparatus: “Practical Farmers of Iowa shall not specifically or arbitrarily promote the special interests of any particular commercial product or other organization.”

While Harry argues there is no clear-cut way to call bull, there are certainly strategies to do so. The research and knowledge acquisition tools central to PFI are examples of such tactics. For example, on page 26 Larry Neppl talks about how farmers on land he managed were able to cut nitrogen rates after conducting the late-spring nitrate test that many PFI farmer-researchers used based on research by the late Iowa State University agronomy professor Fred Blackmer.

Between 1988 and 1993, Fred collected data from 58 site-years through replicated trials. The results showed that cutting nitrogen rates didn’t affect yield for the overwhelming majority of test sites. This, and many trials that ensued, helped farmers learn and share details of what they researched, how they did it and their findings. Because each farm is unique, farmers have always framed their findings as personal experience, not a prescription.

According to Neil Salkind’s “Designing Research,” high-quality research builds on existing knowledge; and is replicable, generalizable, logical, doable, cyclical, incremental and apolitical. Experimental research isn’t the only method of seeking truth. If you’ve attended PFI events, you have heard members generously share their experiences, production and financial details included. But the fundamentals of research design can provide us all with a way of discerning truth from bull. In his “Farnam Street” blog, Shane Parrish suggests additional traits we should consider as we seek out good information:

As Aristotle famously said, “The more you know, the more you know you don’t know.” This perspective hopefully helps us give ourselves permission to practice humility and say “I don’t know” when we don’t know. Together we can continue our inspiring and ongoing quest for authentic knowledge.
To investigation and information-sharing in pursuit of resilient farms and communities,

“PFI offers a variety of resources that are truly helpful in the way of technical information and encouragement.”  – Tom Cory, Elkhart

Now is the Time to Foster Resilient Farms and Communities

Welcome to the Neighborhood