Making Land Affordable for the Next Generation

Nimrod siblings sell farm with focus on community vitality, rather than top dollar

In 2004, Dale Nimrod and his siblings, Vance and Faith, decided it was time to sell the family farm near Stanton, Iowa.

Their long-time farm manager, who had worked the farm since 1948, was retiring and it quickly became apparent that none of the siblings – now in their 60s – was interested in returning to their hometown to manage the farm. “It was time to turn the farm over to someone else,” Dale recalls. “We, like nearly every retiring farmer or landowner I know, aspired to find a nice young family who would appreciate the land, the community and the church, and would invest themselves in caring for all three.” Of course, such a task is easier said than done.

There is an irony, Dale says, in that the types of people you’d like to see buy a farm – such as beginning or newly established farmers, young families or locals invested in rural communities – can rarely afford land sold at auction to the highest bidder. There is enormous pressure, financial or cultural, for retiring farmers and landowners to get top dollar for their farms, and sellers usually just end up hoping that whoever buys the land will share their goals and visions for the property and the community. The siblings were determined and able to see a different outcome for their Stanton farm.

There were two main questions that the siblings were forced to grapple with in order to realize their vision for the family farm: who to sell the farm to, and how to make the farm affordable for the right buyer.

Mark and Melanie Peterson on the Stanton-area farm they purchased from Dale Nimrod and his siblings.

“I started by calling the Lutheran pastor in Stanton,” Dale says. “That’s how we connected to Mark Peterson.”

Dale recalls that at the time, Mark and his wife Melanie, both PFI members, had established themselves within the church and community. The Petersons were renting some land and owned some machinery, and the family seemed to be ready to purchase and make the most of the Nimrod family farm. “We were incredibly lucky to find Mark and Melanie,” Dale says. “They were exactly what we were looking for in a potential buyer for our farm.”

Mark and Melanie eventually ended up buying the Nimrod farm. But at the time, they didn’t really know Dale and his siblings, and it was a surprise when Dale contacted them about purchasing the farm.

“At first when Dale called and started talking about selling the farm, I thought he was looking for a realtor,” Mark says. “I had my realtor’s license at the time, so I thought that’s why he was calling. When I figured out he wanted to sell the farm to us, I told him I couldn’t afford to buy that land. He just said ‘stick with me, I think you can.’ ”

“This was really the type of thing we were looking for, and it was an opportunity for Mark as well,” Dale says. “So then we started working through how to establish a purchase price.”

Anyone who has ever thought about getting into farming knows that the cost of land is arguably the biggest barrier for beginning farmers. That was true in 2004, and it remains the sobering truth today – if anything, land prices are even more daunting for new farmers. Dale and his siblings were determined to help the right buyer break through this barrier.

“It is a misperception, I think, that selling to the highest bidder is the only way to be fair when disposing of property,” Dale says. “We were determined to make our desired outcome a reality, and we were convinced that such an outcome would go much further towards sustaining the community rather than, say, making a cash gift.” 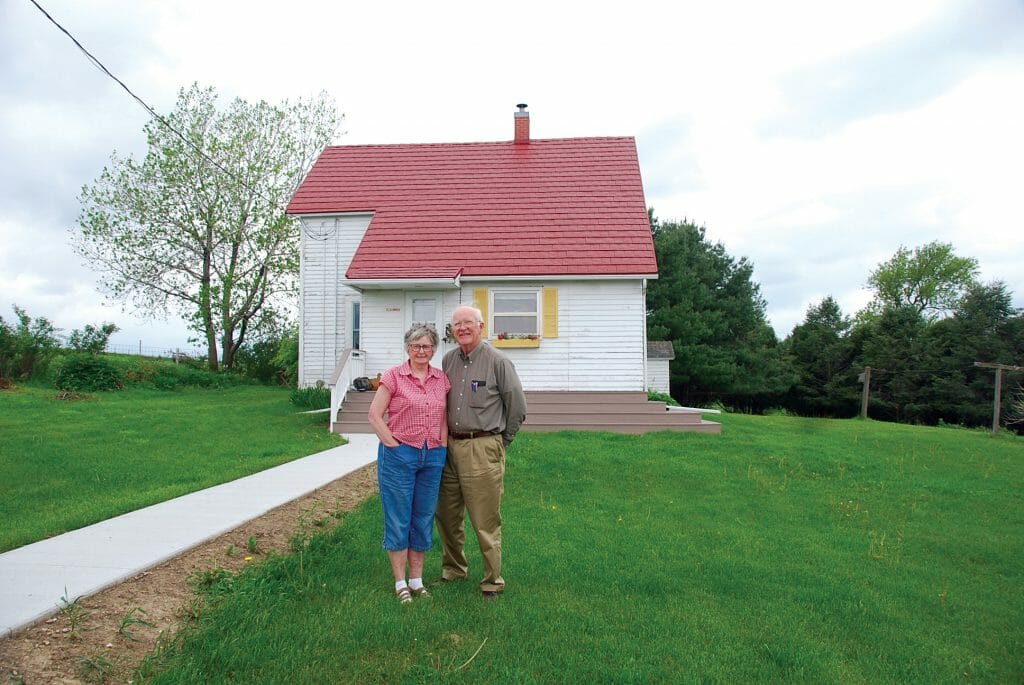 Sonny and Dale Nimrod by their home near Decorah.

Iowa has some of the highest agricultural land values in the world. Generally, the market value of a given property – what a piece of land might sell for at auction or on the realty market – far outpaces what the property can realistically produce in terms of revenue. In other words, as land prices increase, it becomes increasing difficult, if not impossible, for aspiring, beginning or newly established farmers to cash-flow the cost of the land without (and oftimes even with) additional sources of income.

What Dale and his siblings decided to do was sell the land at a price based not on the market value of the property, but rather on the production value (i.e., the cash flow potential) of the farm. They laid the burden on Mark to provide the information needed to determine an appropriate price. “My assignment was to show what the value of the land was based on what it could produce and cash flow,” Mark explains. “It was quite a task to get assigned.”

“It is a misperception, I think, that selling to the highest bidder is the only way to be fair when disposing of property. We were determined to make our desired outcome a reality, and we were convinced that such an outcome would go much further towards sustaining the community . . .” – Dale Nimrod

Mark started by looking at some historical data – average yields for similar ground, current commodity market outlook for different crops, fixed costs, etc. “I looked at corn suitability ratings, production history and county average yields,” Mark says. “I even used crop insurance rates as a baseline in terms of yield. I figured the more data I had, the more accurate and fair my numbers were going to be.”

Mark plugged the information he gathered about potential yield and revenue, along with information about his fixed costs, into several tools offered through Iowa State University’s Ag Decision Maker. “It was a daunting task,” Mark remembers, “both in terms of estimating potential revenue from the land as well as trying to accurately quantify my fixed costs. I wanted to be fair and honest with Dale and his siblings but also wanted to be realistic about what we could afford.

“We really benefited because Dale was up front from the beginning that he wanted to be sure it was something we could cash-flow, within reason. They wanted to make sure it would work for us, that we wouldn’t try and take it on and immediately get into financial trouble.”
At the end of his calculations, Mark came up with a number he could afford in land payments and worked backwards from there, based on a 20-year payment schedule at then-current interest rates, to find a total “production value” of the property.

“We siblings looked over the numbers carefully,” Dale says, “and we concluded that he had done his calculations correctly.” They set a purchase price based on Mark’s production and cash flow calculations, a number substantially less than market value. Together, the siblings and the Petersons had found a purchase price that met the needs of both sides.

The Value of Trust

Mark Peterson recalls that, as complicated and daunting as the process was, it went incredibly smoothly. That’s due in large part, he says, to the way Dale and his siblings approached the issue. They had already committed to the idea of selling the land at a price based on its cash flow potential and had identified who they wanted to talk to about it.

“There was a mutual trust,” Mark explains. “They had really done their homework, and for some reason they had picked us to buy the farm. At that point, I was comfortable being realistic about what we could afford and sharing those numbers with Dale because I was comfortable that I wasn’t competing with anyone – he made it clear it was a one-on-one situation.”

“We really benefited because Dale was up front from the beginning that he wanted to be sure it was something we could cash-flow, within reason. They wanted to make sure it would work for us, that we wouldn’t try and take it on and immediately get into financial trouble.” – Mark Peterson

“It’s a huge commitment for the owners to be willing to sell to someone like me,” Mark says, “especially knowing that they could sell for more based on market value.”

In selling their land, the Nimrod siblings had wanted to help an aspiring farmer, one who they knew would honor both land and community, and they found that buyer in Mark and Melanie Peterson. “This transfer is perhaps the most satisfying accomplishment of my entire life,” Dale says. “I’m profoundly grateful to my hometown community, church and my parents for their influence on my life. To see how Mark and Melanie have seized the opportunity and given back to the community moves me to tears.”

“They had made a commitment to help someone out and make the land affordable,” Mark says, “and we were just damn lucky they picked us.”

A Farm Transfer in Progress