From employee conversations to contingency planning, farmers take the lead.

As cases of COVID-19 continue to spread across Iowa, people living in rural areas are not immune from risk. Because they can’t afford to get sick during key planting or harvesting windows, farmers are taking precautions.

According to the Centers for Disease Control and Prevention, COVID-19 spreads mainly from person to person through air-borne droplets produced when an infected person coughs or sneezes. But the virus can also linger on surfaces. The ease with which the virus spreads has led to widespread social distancing and increased personal hygiene.

In March, before planting began, southwest Iowa farmer Jon Bakehouse of Maple Edge Farm limited himself to weekly runs into nearby Hastings to pick up essentials. When Jon gets home from town, he follows a strict process. He turns off the farm truck, the only vehicle that has left the farm in weeks, and wipes down the steering wheel, door handles and anything else he touched since he left earlier in the day. As Jon heads inside with the family’s groceries and other supplies for the farm, he enters through the side door instead of the front so he can change clothes and wash up before heading inside to join his wife, Tina, and son, Anderson. By early-April, operations at Maple Edge Farm were as busy as usual. Weekly trips off the farm quickly turned into daily trips. Jon had to pick up a bull, take a steer to the local processor and take seed deliveries just like any other April. 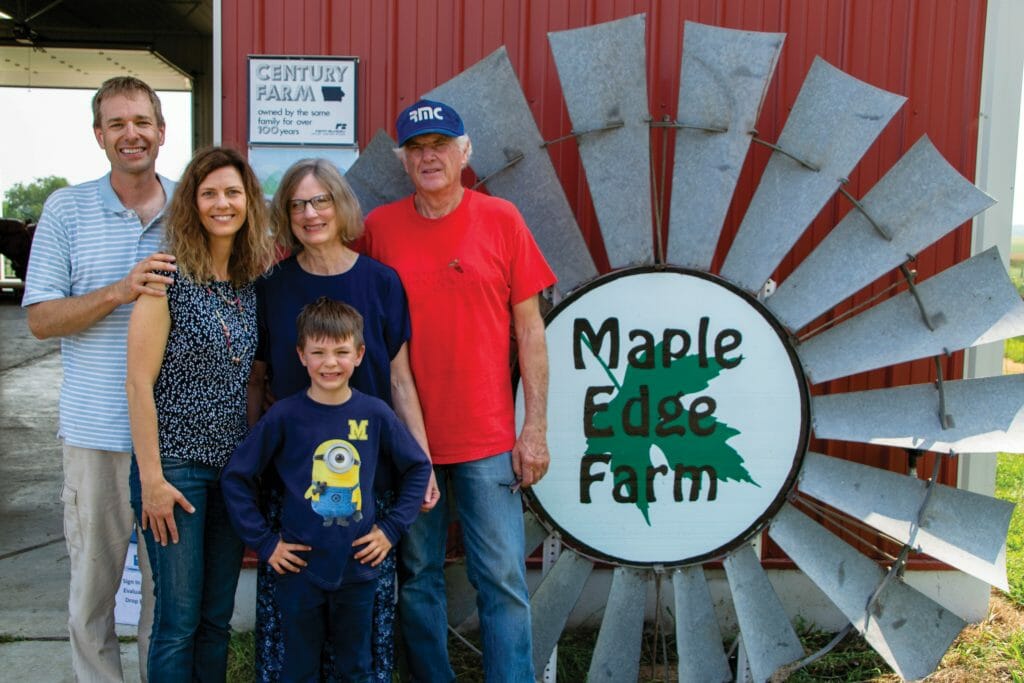 The Bakehouse family – including, from left to right, Jon, Tina, their son Anderson, and Jon’s parents Bach and Nancy – pose by their farm sign.

Gayle Olson is the assistant to the director for Iowa’s Center for Agricultural Safety and Health. Her work, like many others, has pivoted to working from home. Gayle and her husband, Jeff, also farm near Winfield in southeast Iowa. When trips off the farm are necessary, she and others on the farm wear masks. But because the farm team is small – just four people, all family save one – limiting trips to town is the main precaution Gayle is taking. “I ran some errands on Sunday,” she says. “That was the first time I had gone to the grocery store in about two weeks.” 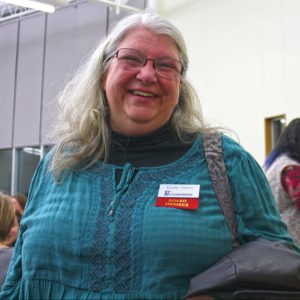 Gayle Olson farms near Winfield and serves on PFI’s board.

The Olsons are being strategic with farm crew safety. They have focused on better hygiene by setting up handwashing stations around the farm. They’re also limiting interactions in spaces and with items they might share with another person. “We don’t have half a dozen employees like some farms do,” Gayle says. “We have Jeff, myself, my son and one part-time hired man.” For those with a larger farm crew, Gayle suggests people specialize to specific equipment to avoid spreading the virus, and heavily sanitize after each use.

Willie Hughes of Hughes Farms in Janesville, Wisconsin, manages 5,000 acres alongside his dad Randy, mom Judy, sister Julianne and four other full-time employees – who do most of the fieldwork, operating and equipment maintenance throughout the year.

When COVID-19 became more serious, Willie had a discussion with the farm crew, emphasizing their right and responsibility to do what was necessary to keep themselves and their families safe. He reiterated to his employees the importance of taking sick days when they’re not feeling well or when they need to take care of sick family members. For a long time, Hughes Farms has offered paid sick leave to its employees. It’s something the Hughes family feels strongly about.

As an essential business, Willie knows he and his employees are constantly being confronted with situations that could put them into contact with someone who could be infected. “We’re out in the world every day,” Willie says. “There’s really no way to guarantee the prevention of infection, but we’re trying to self-isolate as best we can.”

Willie understands that it takes cooperation to maintain the farm, and working together in the same physical space is inevitable. The crew at Hughes Farms limits direct contact closer than 6 feet of each other to no more than 30 minutes per day, and only when necessary. “How can you fix a broken piece of equipment or take off a tire tractor without someone lending a hand?” Willie says. “At some point we have to still work together.”

The eight-person Hughes Farm crew convened shortly after their first meeting to put precautionary measures in place. The conversation began with discussing safety practices including hand-washing and disinfecting high-contact surfaces like cell phones and door knobs. “It’s been a challenge,” Willie says. “It’s easy to put precautionary measures into place, but it’s much harder to put into practice. Nobody’s been in this situation before. Life experiences up to this point don’t really prepare you for this new normal.” 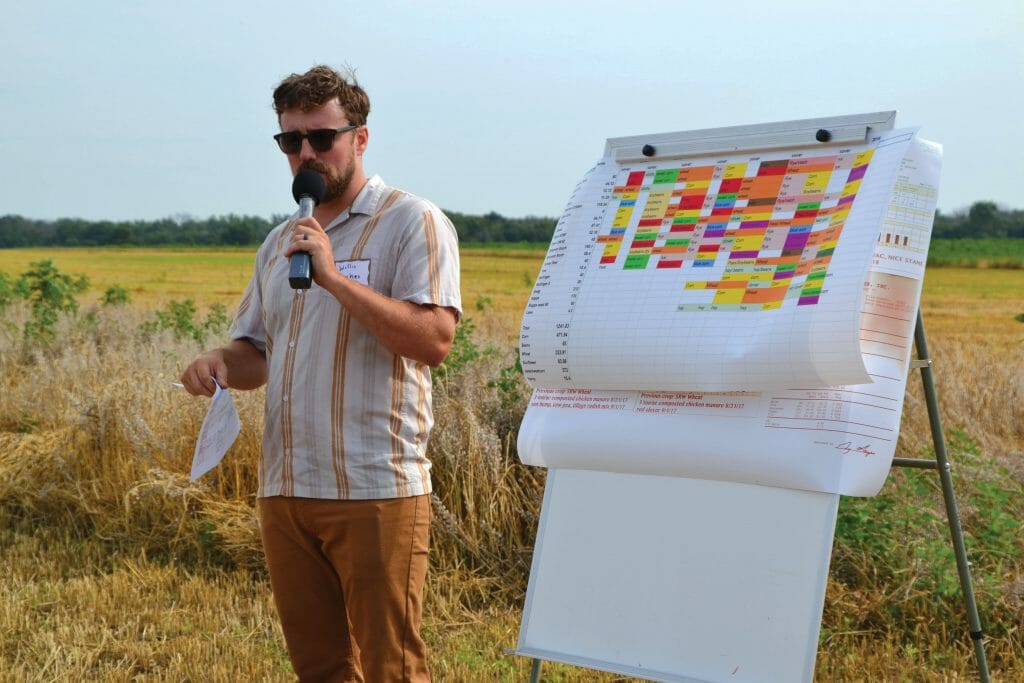 In March, anticipating the likely need to take farm precautions, Willie was able to source a virucide called QDII, a food-grade sanitizer. He mixed this sanitizer into a solution and put it in spray bottles that he keeps around the farm in every vehicle for employees to spray down after use. “Whether it’s the steering wheel, shift lever, radio dial, seat belt buckle or whatever it is you touched, you just spray it and leave it,” Willie says. “You don’t even have to wipe it off. It just dries and neutralizes the virus.” Willie wants to be sure the safety procedures put in place are effective, but also not overly burdensome for his employees.

Though the Olsons haven’t implemented one on their farm, Gayle suggests using a sanitation checklist to indicate when a piece of equipment gets sanitized: “That way you don’t have to take for granted whether or not the last person to use that machine sanitized it.”

Once it became apparent to Willie that COVID-19 could affect the farm’s day-to-day operations, he implemented standard operating procedures. Farm workers each drafted an SOP for the equipment they knew best. “Obviously each machine has its own operator’s manual, Willie says. “But those aren’t always the whole picture. You could look at the operator’s manual for the planter, the tractor or the monitor, but the knowledge about how all those pieces interact is what they aimed to capture in the SOPs.”

Thankfully, no one has been sick at Hughes Farms. But Willie feels better knowing they’ve prepared for that possibility by ensuring others can more easily operate the farm equipment.

Farm safety and health is something the Olsons are always mindful of on the farm, but it’s also a part of Gayle Olson’s day job at I-CASH. She says it is now more important than ever to pay attention to safety – and not just precautions to keep you safe from COVID-19, but those that can protect you from other ailments like falls and broken bones. “You don’t want to expose yourself at the emergency room, and you don’t want to be that extra burden on medical professionals that are already working their tails off,” Gayle says. “Paying close attention to safety in general is really important right now.”

With new outbreaks surging across the U.S. – and future outbreaks likely, according to CDC researchers – farmers may need to have similar preparations in place for harvesting amidst the ongoing pandemic.