Testing the Limits of Terminating Rye in Soybeans

Cover crops offer many on- and off-farm benefits. Not only do they reduce soil erosion and help keep nutrients in place, they can make it easier for soil to absorb water, thus increasing resilience to flooding.

Cereal rye is the cover crop of choice for many Iowa corn and soybean producers because it grows in the fall and spring between harvesting one crop and planting the next, and because it overwinters well. Many farmers plant cereal rye in the fall after harvest, then kill it prior to planting the next spring, either mechanically or with herbicides, to ensure it doesn’t compete with the cash crop for essential nutrients, moisture and light.

But research has also shown that letting rye grow for longer in the spring can help control weeds and boost other benefits of cover crops. More living roots in the ground and denser plant matter covering the soil increases the cover crop’s ability to control weeds, slow erosion and stem nutrient loss. For growers, this can lead to tangible cost-savings.

Three Practical Farmers of Iowa members – Sam Bennett of Galva, Jon Bakehouse of Hastings and Tim Sieren of Keota – sought to test this approach on their farms. Through PFI’s Cooperators’ Program, they conducted on-farm research to find out if waiting to kill the cereal rye until after planting soybeans could maximize the rye’s biomass without negatively affecting soybeans. 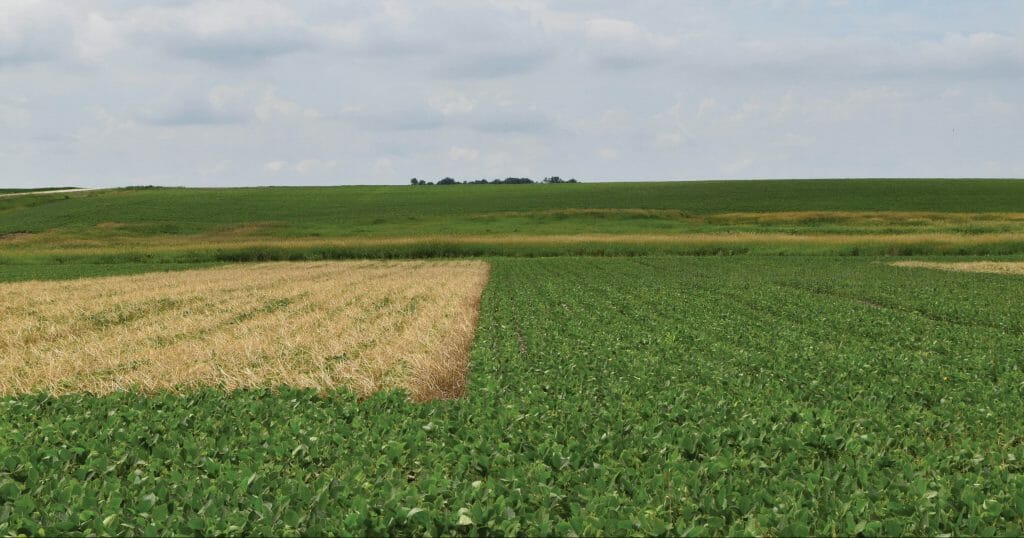 Research That Paved the Way

Before this trial, Sam conducted other research that showed how a cereal rye cover crop can control weeds without sacrificing profitability in soybeans. By using a cover crop, he was able to reduce herbicide costs and increase his return on investments by $4.14 per acre.
Earlier research by PFI members first tested the limits of older recommendations for terminating rye, which advised farmers to kill it two to three weeks before planting soybeans. In 2015 and 2016, participating farmers showed that delaying termination until near the date of planting soybeans, as opposed to two weeks prior, could result in better weed control and a nearly $50 per acre increase in return on investments.

Encouraged by those results, Tim and Jack Boyer, of Reinbeck, pushed those limits further in 2018 by testing the effects of delaying termination until two to three weeks after planting soybeans. Both found that delaying termination lowered soybean yields, but Tim was pleased the strategy allowed him to reduce his use of herbicides.

Although the cost-savings from reducing herbicides was not enough to pay for the yield drag that year, it showed the potential boon to weed suppression of the termination strategy and encouraged Sam, Tim and Jon to test the strategy in 2019 under different conditions.

Sam Bennett (left), Jon Bakehouse (center) and Tim Sieren (right) participated in on-farm research with PFI to find out if waiting to kill a cereal rye cover crop until after planting soybeans could maximize the cover crop biomass – and with it, weed control and soil health benefits – without affecting soybean yields.

To test their shared hypothesis, all three drilled cereal rye after harvesting corn in fall 2018. The following spring, they terminated rye in multiple strips on two different dates – one near the date of planting soybeans, and another date as much as 52 days after planting soybeans. By the end of the season, the farmers had collected data on rye biomass, soybean stand counts and soybean yields in each strip. In northwest Iowa, Sam was pleased to find that delaying termination until 27 days after planting soybeans did not reduce his soybean yields and produced more rye biomass.

“I’d like to see the USDA Risk Management Agency remove the restrictions on cover crop termination dates as they apply to soybean crop insurance eligibility,” he says, referring to rules informed by Natural Resources Conservation Service research that require farmers to terminate cover crops on or before the date of planting soybeans in the western third of Iowa, and before soybean emergence in the eastern two-thirds of Iowa, to remain eligible for crop insurance.

In eastern Iowa, Tim likewise found his soybean yields were unaffected by delaying termination until 16 days after planting soybeans. As in 2018, he observed less weed pressure in the strips where he delayed termination and was happy to again use less herbicide. The results have encouraged him to continue waiting longer before killing rye in his soybeans.

“I plan to use more rye cover as a replacement for the first residual herbicide pass,” Tim says. “I’ve been seeing weed control advantages in my use of covers in soybeans. Now I have numbers that prove it works.”

On Jon’s southwest Iowa farm, wet weather in spring 2019 prevented him from killing the rye at soybean planting time. As a result, he was only able to test the effects of terminating it 24 and 52 days after planting. This spring, however, Jon was pleasantly surprised to find green cereal rye growing in the strips where he had terminated rye the previous year 52 days after planting soybeans. The rye in those strips had fully matured and dropped seed before he was able to terminate it, which produced a free cover crop this spring ahead of corn. Initially, his experience during the trial prompted him to feel a need “be more careful about letting cereal rye go too long before termination.”

Seeing the self-seeded cover crop this spring, however, has inspired him to think about other ways he can continue pushing the limits of delaying rye termination in soybeans.

“I plan to use more rye cover as a replacement for the first residual pass. I’ve been seeing weed control advantages in my use of covers in soybeans. Now I have numbers that prove it works.” – Tim Sieren

This growing season, both Jon and Sam are extending the trial by comparing three rye termination dates: at planting, just after soybean emergence and at the V1 stage after the first soybean trifoliate leaf unrolls. They will see how those dates compare with not terminating the rye at all. In this treatment, the farmers will let the rye grow with soybeans and self-seed.

In addition to measuring soybean yields in each treatment, they will measure rye biomass during the soybean season and the following spring before planting corn to determine how much biomass the self-seeded rye cover crop can produce. Jon is reluctant to use cover crops before corn because it’s more sensitive to cover crops than soybeans. But he wonders if a self-seeded cover crop would produce less biomass – and thus be less likely to affect corn yields.

Both farmers are eager to see if they can maximize environmental benefits of cover crops while reducing costs by getting two cover crops for the price of one – though time will tell how the strategy affects soybean yields.
Regardless of the outcome, curiosity and a desire to steward the environment while improving their profitability drives farmers like Jon, Sam, Tim and other farmers who conduct on-farm research to test all manner of wild ideas – often to their surprise and benefit.