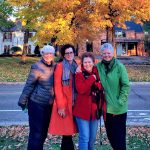 The event is free and will take place Tuesday, Oct. 20, from 7-8:15 p.m., on Zoom. All are welcome to attend, but pre-registration is requested by Oct. 17. To sign up, visit practicalfarmers.org/farmland-owner-legacy-award.

At 7 p.m., PFI Executive Director Sally Worley will welcome guests. Past PFI executive director Teresa Opheim will present the award at 7:15 p.m., after which the Bouska sisters will show a video and discuss their journey as farmland owners.

At 7:45 p.m., Teresa – who now directs the Climate Land Leaders initiative of the Minnesota-based Main Street Project – will share a few resources to help people identify and communicate farm transfer goals. At 8 p.m., guests will have a chance to ask questions during a Q&A.

The Farmland Owner Legacy Award is granted annually by PFI to landowners who use their land to help the next generation get started, advance land stewardship and promote long-term sustainability of farm businesses, environmental quality and rural communities. With this award, Practical Farmers calls attention to the important role non-operator farmland owners can play in the future success of sustainable agriculture.

When the Bouska sisters inherited their family farm in 2009, after their father Edward’s death, they became joint owners of the 450-acre farm they grew up on near Protivin, in northeastern Iowa. But they also inherited their parents’ legacy of proactive planning, community-mindedness and working together toward shared goals.

After their mother, Elmarie, died in 2011, the sisters began taking increasingly deliberate steps to map out their vision for the farm while creating space for sometimes difficult emotional dynamics and differences of opinion to be navigated with love and compassion.

They have also progressively increased conservation practices on the land, and last year made the bold commitment to convert the farm to a regenerative agriculture model within 10 years.

“Our parents really set the tone for getting along,” Peg says. “They worked hard to improve their community, and in their way, were movers and shakers. We think they would be really proud of us right now.”

In 2013, the Bouska sisters and their brother Jack, who also was a joint owner, decided to incorporate the farm into an LLP, with each sibling owning a share. In 2014, Jack died suddenly. As outlined in the partnership agreement, the sisters bought out Jack’s share.

The sudden loss also catalyzed their farm visioning process. Before Jack’s death, the siblings had started talking with their long-time tenant, Tom, about the possibility of planting a pollinator field in a small 9-acre area adjacent to a wetland that was not convenient for Tom to farm. Jack had been actively involved in researching the idea.

The following spring, the Bouska sisters pressed forward with the pollinator planting, naming the field “Jack’s Field” in their brother’s honor. In 2017, they added two more pollinator fields, 5 acres each, named after their parents. The sisters also started meeting and discussing farm business more regularly.

“When we started doing that,” Peg says, “it just accelerated our process.”

In 2014, Peg attended Practical Farmers’ inaugural performance of the play “Map of My Kingdom,” which explores the many thorny and emotional facets of farmland transfer. That’s how she learned about PFI and got connected with Teresa Opheim, PFI’s executive director at the time. In 2016, the Bouska sisters gathered at the farm with the singular purpose of mapping out their goals for the future of the farm.

“We were raised in a mindset of conservation, stewardship and love of nature,” Ann says. “My sister partners and I were all concerned about international buyouts of Iowa farmland, CAFOs increasing in our area and land consolidation. This would also mean the decline of the local community, small towns and rural quality of life.”

Maintaining family harmony has been central to the process. With a 19-year age spread between Jack, the oldest, and Carol, the youngest, listening and reaching consensus are essential to how they work together.

“We vote, but we also talk through things and explain our concerns,” Carol says. “If somebody feels left out, we try to address that. It takes time and effort, but I believe that in the end, we are leaving our healthy partnership as part of our legacy also.”

In 2017, each sister drafted a farmland legacy letter, capturing treasured memories and personal hopes for the land’s future. Afterwards, they all went swimming together, a tactic – planning a group fun activity after the business ends – they intentionally weave into all their meetings.

“It’s really, really important to have that relief of fun,” Sally says. “We have a very strong ethic of doing the work, then having fun. That contrast between working hard but also enjoying yourself has really cemented our connection.”

The big turning point in the sisters’ farmland visioning, when they decided to convert the farm to a regenerative system, was in October 2019, when they all attended a Women in Sustainable Agriculture conference, organized by MOSES, in Minneapolis.

They had hired Rena Striegel, president of Des Moines-based Transition Point Business Advisors, to lead them in two half-day farmland planning sessions over a weekend. Before the first session with Rena, they attended a regenerative agriculture workshop at the WISA conference led by Lindsey Rebhan and Paula Westmoreland of Ecological Design.

“It was transformative,” Peg says of the workshop. “It was a four-hour intensive, and it was one of those beautiful fall weekends. It was kind of like things just clicked for all of us.”

The timing couldn’t have been better. The sisters carried their renewed sense of purpose into their session with Rena, who encouraged them to think big and helped them refine their vision. Peg says Rena also gave them confidence that they were much further along than they realized, both emotionally and in having a shared vision.

The sisters have since hired Ecological Design, a women-owned firm, to help them transition their farm from conventional row crops to a system with diverse plants and animals that keeps soil covered year-round.

Earlier this summer, they took another big leap, becoming part of Main Street Project’s Climate Land Leaders initiative. “The sisters will be implementing a stretch goal to implement climate-friendly agriculture on their land,” Teresa says. “We need more farmland owners like the Bouska sisters, who put family relationships first and are deeply committed to conservation while working with their existing tenant.”

For their part, the sisters are excited about what the future holds. While they acknowledge they have many questions still to work through – not least, how to transition the farm – they feel closer as sisters, and energized knowing they can use their hallowed ground to care for the land, embody their values and honor their heritage.

The sisters advise other families facing a farmland transition to not wait, seek out resources and people who can help, find shared goals, treat the process as a business and recognize it takes time. Above all, they urge others not to wait until death or tragedy forces a decision.

“Don’t leave the decision about land until a funeral forces it,” Sally says. “That’s a time when people are grieving and stressed, not making their most logical or wise choices.”

“Farmers are kind of private people, and it’s really hard to talk about farm legacy planning because you’re planning your death, basically,” Carol says. “It requires one to be brave and think deeply. But it is also so rewarding to know that when I leave this planet, I will not be leaving a lot of unresolved issues for the next generation to deal with.

“I personally went in a year’s time from feeling really sad about the farm, and what’s going to happen after us, to feeling really excited and energized about what we can do in our lifetime – and that’s given me purpose.”