Have you ever wanted to seed cover crops but found there were just not enough days after harvest? It turns out that seeding cover crops such as cereal rye later in the year can reap some of the same benefits of earlier seeded cover crops.

Wade Dooley is a Practical Farmers of Iowa member in Marshall County, Iowa and the sixth generation in his family to operate Glenwood Century Farm. In 2018, he had some extra seed in storage and wondered how late one could seed cover crops and still see some of the benefits. The question prompted Wade to set up an informal on-farm trial in hopes of adding to the growing body of anecdotal evidence of the cutoff date for planting a cereal rye cover crop in Iowa.

Starting in the fall of 2018, and into the spring of 2019, Wade began drilling rye into an 80-acre field in quarter-mile long strips at 1 bushel an acre. He tried to complete as many passes as possible with rye in the drill before it got too muddy for the equipment. Wade made these passes every few weeks after the frost softened in the mornings. By November 2019, Wade had drilled rye every month of the year – in the process, had pushed the envelope on seeding. 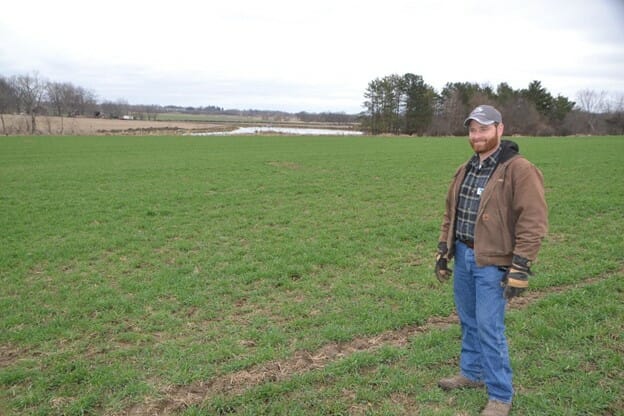 Wade Dooley with his cover crop.

Observation 1: Rye can be planted all the way till spring of a following year, but don’t expect a good stand come corn and soybean planting time.

In mid-May, when Wade went to plant soybeans, he found – as he expected – that stands of cereal rye seeded at different dates resulted in differing spring performance. The rye drilled during the early fall of 2018 had the best stand, unsurprisingly, as indicated by the number of shoots (known as tillers) on the plants. The cover crop seeded closer to March had germinated but not tillered, which created a thin stand when the soybeans were planted.

Observation 2: Seeding cover crops past March 20, 2019 conditions did not allow for vernalization.

Wade wondered if the March planted rye would stay vegetative or produce flowers. Because rye needs exposure to prolonged cold weather to trigger flowering, a process called vernalization, most often any rye seeded after March 20 will fail to flower and will remain supple and grass-like. All rye planted before March 20, 2019 initiated flowering. The rye seeded March 20 rye did not.

Observation 3: If your goal is weed control plant in October or November. Don’t wait!

As for weed control, Wade found that the mid-fall seeding worked best – another result he anticipated. If you have high weed pressure plan to seed cover crops before ground freezes. If your fields have mid to low weed pressure, you can seed into February, but Wade does not recommend seeding into March.

Wade observed that the non-vernalized rye performed the worst at weed control. Wade also reported that all of the stands were easy to terminate with Roundup, which he did after no-till planting soybeans directly into the cover crop.

Observation 4: Keep your end goal in mind, and be willing to adjust practices

No matter when you seed cover crops, it is important to determine your goals for seeding cover crops. Your goals will guide what would be best practices, even if you seed cover crops late. If you are aiming for the best weed control in the spring, your seeding rates will need to be increased substantially if you seed the rye in the dormant timeframe. Wade recommends at least doubling the amount you normally seed if not triple the amount in order to obtain the best weed control.

Last fall, Wade provided some rough guidelines on how you might adjust seeding rate based on seeding timing and your goals:

As you consider the possibility of seeding cover crops late in the year, it is also important to keep cost in mind. While Wade’s research has shown it’s possible to seed rye later in the year, you may not get the economic value that you would have gotten if you had seeded earlier.

Because weather is so variable from one year to the next, Wade doesn’t try to seed his cover crops by a hard-and-fast date. However, he does generally aim to finish seeding cereal rye by Thanksgiving, but in ideal conditions the earlier the better for him personally.

Testing the Limits of Terminating Rye in Soybeans