Imagine being able to raise organic soybeans as a labor saving and soil building crop. 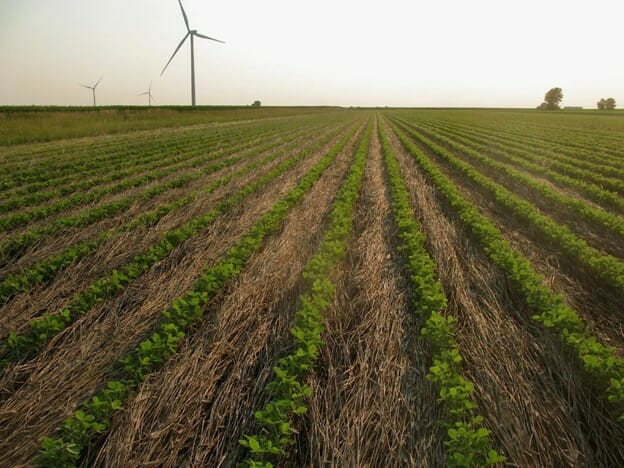 The Allison Farm has a long history of organic production: most fields have never received herbicides and the first field was organic-certified in 1997; the whole farm has been certified since 2009. As a result, all organic no-till research at the Allison Farm has been conducted in fields with large weed seed banks (unlike fields transitioning from conventional management).

Joel joined our shared learning call earlier this month to share his insights of raising and experimenting with organic no-till soybeans.

Joel emphasized that effective weed suppression by a rolled cover crop requires a strong uniform stand of a high biomass cereal grain such as cereal rye, triticale or cover crop mixtures. Early planting of the cereal grain and a favorable seedbed are both key to reducing risk of inadequate cover crop growth, and both are much easier to achieve following a small grain crop.

For example, the field planted to no-till soybeans at the Allison Farm this summer (2021) produced a small grain crop in 2020.  Soon after a late July harvest of mixed oats and peas, the field received shallow tillage to terminate weeds and promote digestion of crop residues. A second shallow tillage pass occurred shortly before cereal rye -either Progas hybrid rye or ND Gardner open pollinated cereal rye-  was drilled on September 18, 2020. The second tillage pass terminated a strong stand of volunteer oats and peas creating a weed free seed bed with good nutrient availability for the rye. In addition to rye, some plots were also drilled to supplemental species (e.g., 4010 peas, Survivor winter peas, radishes, crimson clover, balansa clover, buckwheat and flax) on September 19 and 20. 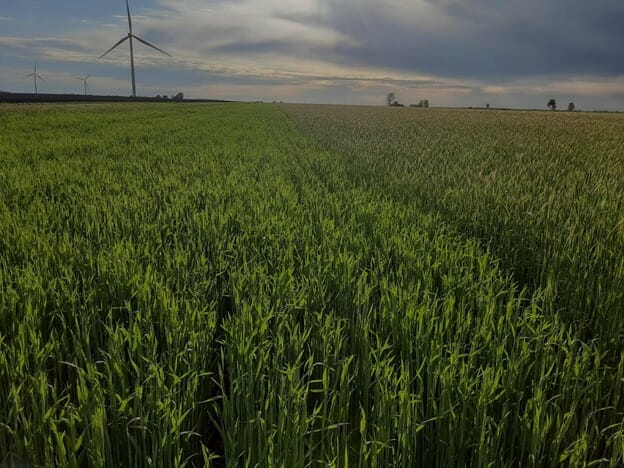 The open-pollinated rye began shedding pollen on May 13, 2021, about a week before the hybrid rye. Almost three weeks later, on June 3, 2021, soybeans (Blue River 34A7, a tall, leafy organic variety used for most no-till soybeans studies at the Allison Farm since 2009) were planted on 30” rows at a target population of 195,000/acre. High cover crop biomass levels (5-7 dry biomass tons/acre) were measured for all plots a few days before planting. On June 8, 2021, the field was rolled with a 15 foot I&J roller crimper resulting in very effective knock-down of rye in the early dough stage. 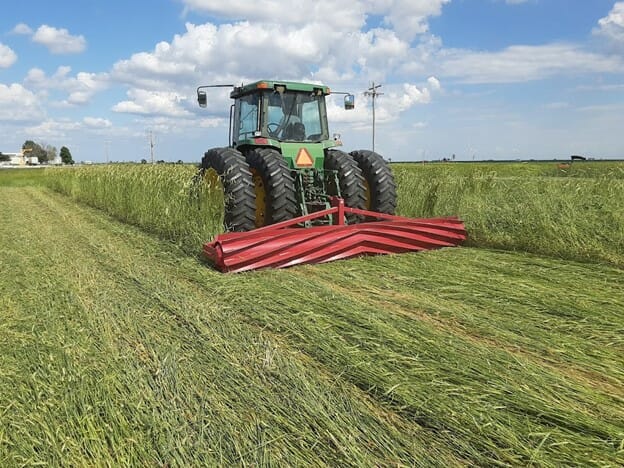 Roller crimping when the rye is at dough stage enables a more thorough roll-down.

2. In fall, be selective in picking a field for no-till, organic soybeans

Joel commented that no-till soybean fields should be carefully selected.

Perhaps most important, fields should have low weed pressure with special emphasis on perennial weeds such as Canada thistle, bindweed, horsenettle, quack grass and trees that are not strongly suppressed during no-till soybean production.

Fields coming of out conventional production with a history of good chemical weed control are good candidates for success.

Fields that are broadcast seeded to cover crops without incorporation (e.g., aerial seeding or ground based seeding into standing corn) are much less likely to result in strong uniform stands of cover crops.

3. Check again in the spring

Another critical condition for success is adequate moisture in the soil profile and/or a high chance of moisture recharge. Joel explains, “Cereal rye does a great job of pulling moisture out of the soil – both the surface and the whole soil profile – with its high water demand when it is at, and for a few weeks after, anthesis. Surface soil conditions can go from ideal moisture to too dry very quickly.”

4. Plant soybeans later and deeper than you might otherwise

About five years ago, Joel transitioned from drilling no-till soybeans on 7.5” rows to planting on 30” rows using a precision corn planter to achieve uniform seed placement. Planting deeper – at least two inches deep – increases the likelihood of adequate moisture and strong stand establishment. Crusting is unlikely when a field surface is covered with a thick mat of cover crop residue, so soybeans can emerge from more than 2.5 inches. 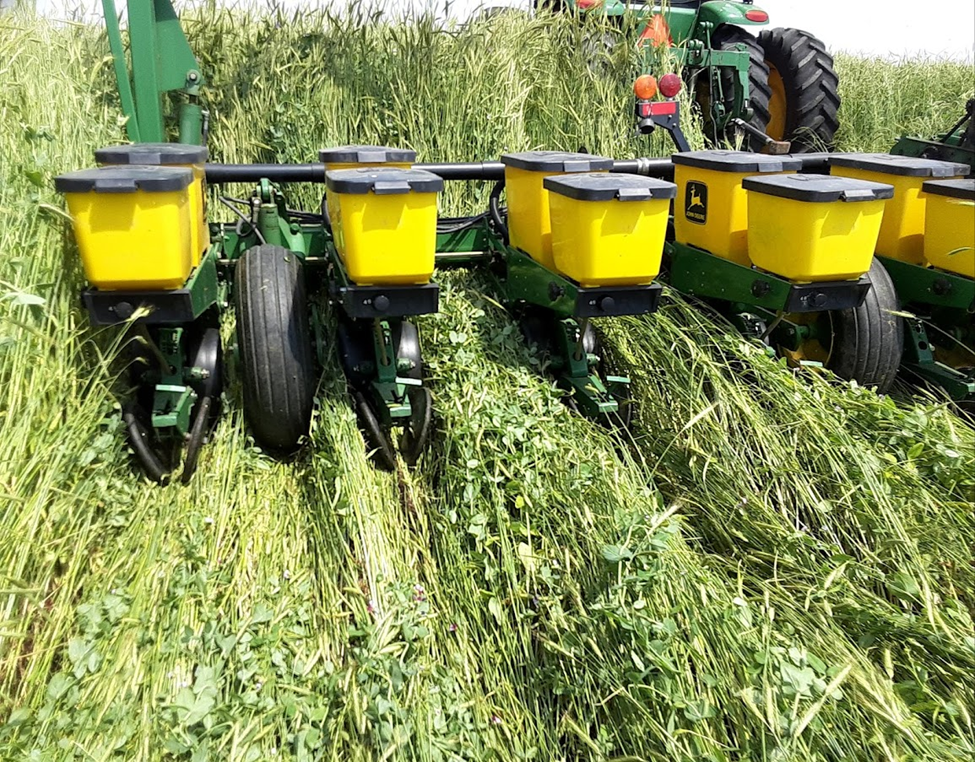 Planting later followed by roll/crimping after planting will allow rye to reach the milk to dough stage, resulting in full and permanent knock down of rye with pretty much any type of roller.

Joel likes to roll about a week after planting and commented that rolling after soybeans reach V2-V3 adds risk because both the crimper and rye stems can act as a guillotine for elongated soybean seedlings.

5. Have a backup plan for if conditions aren’t right

So what do you do if you don’t check the stand and moisture boxes? Joel says, “You should probably pull the plug and not do organic, no-till soybeans in that field.” One option is converting to tillage-based soybeans, with the caveat that it may be difficult to adequately process the abundant rye residues to allow effective field operations. Even if your planter can handle the residue, your cultivation system might not be able to. Removing the rye residues by grazing, or harvesting for straw, hay or silage are options. Flail-chopping can also make the rye residues more manageable for future field operations. 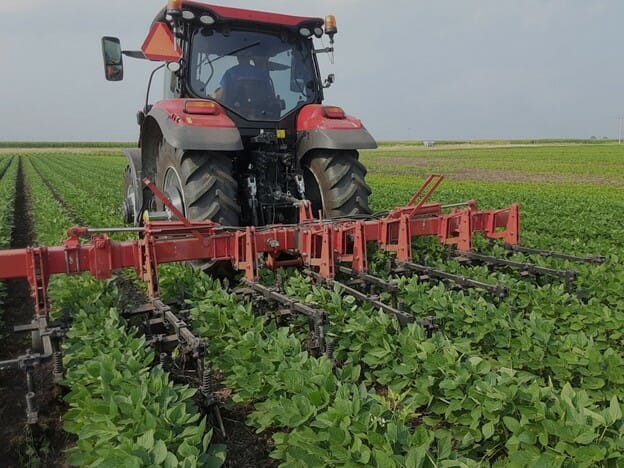 If no-till, organic soybeans isn’t in the cards, reverting to cultivation is an option.

Joel would be happy to hear from producers who are thinking about experimenting with a similar system, so feel free to contact him using the phone number and email on his page.