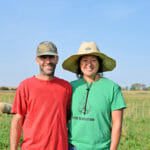 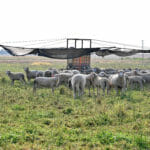 AMES, Iowa — Practical Farmers of Iowa, in partnership with farmer hosts, will present four screenings of its feature-length documentary, “Livestock on the Land,” at locations across Iowa in September, starting with a showing on Sept. 4 in Charles City.

The film – PFI’s first full-length production, which debuted during PFI’s virtual annual conference in January – tells the story of regenerative grazing and its promise for the Iowa landscape. Central to the story is the role of community as an essential connective thread.

“ ‘Livestock on the Land’ goes beyond the science of regenerative agriculture to tell a more vital story about community, stewardship and resilience,” says Nick Ohde, PFI’s communications and marketing director, who produced and narrates the film. “The concept of regenerative agriculture has generated a lot of buzz, with ample talk about soil and carbon, cover crops and pasture, and the role of livestock on farms.

“But clean water and healthy soil are only part of resilience. Community is the other side of the equation, and as we see in the film, livestock are central threads connecting people and bolstering our rural communities. “What sets ‘Livestock on the Land’ apart from other documentaries about regenerative grazing is this focus on people, and the message that if we want an agriculture that works for our people, we have to work together to build it.”

All screenings are free and open to the public, and will take place outside. Guests are advised to bring chairs and blankets for comfortable viewing. Dinner or snacks will be available to enjoy before or during the film.

Afterwards, a panel discussion with some of the farmers featured in the film will let guests learn more about the project and ask questions inspired by the film. Learn more at practicalfarmers.org/livestock-on-the-land.

PFI’s late co-founder, Dick Thompson, believed that when cattle leave the farm, the people leave and the community begins to crumble. “Livestock on the Land” explores how thriving rural communities and livestock are inherently linked.

Since premiering in January 2021, the film has grossed over 111,000 views on YouTube and serves as an introduction to PFI’s vision for Iowa’s landscape: an Iowa with healthy soil, healthy food, clean air, clean water, resilient farms and vibrant communities.

Farmers hope to encourage others through film viewings

To produce “Livestock on the Land,” Practical Farmers of Iowa interviewed 40 of its farmer members. While not all these farmers could be featured in the final documentary, their perspective and experiences offered vital insights that helped inform the central themes of the film.

The participating farmers hope their honest experiences about livestock farming will help inform others about regenerative agriculture, the importance of community and how livestock are key to a resilient system. They also hope the film will invite new voices to the table – both farmers and supporters.

“Livestock farming is a possibility for anyone regardless of background,” says Wendy Johnson, an event host and farmer featured in the film.

Through the film screenings and farmer panel discussions, she hopes viewers will appreciate livestock and understand their ownership in the food system.