A Calling to Teach

Doug Peterson has always had a reputation as a dedicated speaker and teacher. For 32 years, until retiring in July 2020, he served as a soil health specialist with the Natural Resources Conservation Service based in northern Missouri, a career that took him across Iowa and the Midwest to give talks and demonstrations on soil health. 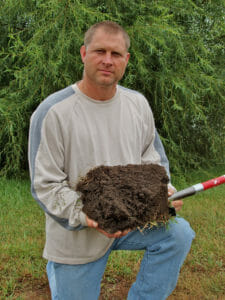 Still, I had expected Doug to be enjoying some downtime when I rang him this past July to thank him for becoming a lifetime member of PFI. So I was surprised when Doug answered and told me he was presently travelling across Colorado and Wyoming consulting with landowners on regenerative agriculture.

My surprise stemmed partly from the fact that Doug, who operates a 250-head cow-calf operation near Ridgeway, Missouri, was involved in a serious farm accident earlier this year that sent him to the hospital for several weeks. But neither the accident nor retirement has slowed him down.

Anyone who’s had a chance to see Doug speak during his time with NRCS has felt his passion for soil health, and his eagerness to share it. “The teaching-calling came back to me,” says Doug of his post-retirement motivation to resume outreach work. “Now I’m doing consulting through the group Understanding Ag.”

The work brings him alongside farmers like Gabe Brown, Ray Archuleta and Allen Williams to coach landowners on regenerative agriculture practices. And, like his previous career, it has kept him on the move: In the year-plus since retiring, Doug has already consulted in California, Georgia, North Carolina, Texas, Oklahoma, Kansas, South Dakota, Wyoming and Colorado.

In his final five years with the NRCS, he covered a lot of territory in Missouri and Iowa as the regional soil health specialist. In that time, he spoke at roughly 70 meetings a year, reaching about 7,000 to 8,000 people each year with the principals of regenerative agriculture and how to improve the environment while being profitable.

He attributes his interest in soil health to a number of fortuitous happenings in his career and on his farm. In the 1980s, Doug participated in a farmer-led grazing group, Green Hills Farm Project, where he learned from well-known grazier Jim Gerrish and was introduced to Allan Savory, cofounder of the Savory Institute and an advocate of holistic grazing, and his teachings.

After buying his own farm in 2000, Doug set up a grazing system with 16 pastures on a 30- to 40-day rotation. Due to a water tank issue, he had to skip one pasture in the rotation, which inadvertently gave it a 90-day rest before the cows came back to it.

“I thought if I turned them out into waist-high grass, they’d waste a bunch of it,” Doug says. “So I strip-grazed it doing daily moves in the tall grass. I thought it was a waste at the time. But the next year, that paddock grew twice as much forage as any other. I didn’t know what was going on yet, but that got me thinking again about higher stocking densities.”

This led Doug to revisit Allan Savory’s “Holistic Management” book and take some Holistic Management classes. Soon after, he learned about soil’s aggregate stability from Ray Archuleta and started down a different path, questioning the amount of terraces being cost-shared in northern Missouri. “That’s when I realized that virtually all of the practices NRCS was offering were treating symptoms, not the root causes,” Doug says. ‘If we want to solve our environmental issues for good, we have to treat the root cause not the symptom.”

On his own farm, he has started focusing more on genetics, after struggling to find cattle that could do what he wanted. He started with a Pharo genetic base, and now has a mainly Red Angus base with a little bit of Hereford and South Poll influence.

“I’m trying to get adapted animals, where everything is rotated intensively,” he says. “We really focus on using the livestock as a tool to improve the land.” Doug plans to add sheep soon, take over his family’s farm, and continue consulting across the country.

As for his decision to become a lifetime member of PFI, Doug says: “After I spent four to five years working in Iowa, I knew PFI was my kind of group. I appreciated [your] work and efforts. I like people that fight the good fight, even when it’s an uphill battle.”