Review of “Iowa’s Remarkable Soils: The Story of Our Most Vital Resource and How We Can Save It”

Soil scientists have a tough row to hoe: making their reams of data accessible and meaningful to the average citizen. In her book, “Iowa’s Remarkable Soils: The Story of Our Most Vital Resource and How We Can Save It,” Kathleen Woida attempts to do just that.

This title especially caught my attention because it is the only one of my many soil health books that uses the word “story.” What better way to relate reams of data than through stories? This book is in two parts: the first addresses the traditional five factors of soil formation; the second explores Woida’s assertion that human imprint is a sixth factor.

When discussing soil formation, Kathleen includes interesting stories relatable to a farmer’s experience. Soil scientists develop a “feel method” to identify a soil’s texture with great accuracy, and in the stories of how soil scientists mapped Iowa, she describes the work of Robin Wisner. He started mapping soils in 1968 and didn’t stop until 2014. During those years, he “… walked an average of 8 miles a day every weekday of the year when the ground wasn’t frozen. Mapping was accomplished … by pushing a three-quarter-inch soil probe 60 inches, later 80 inches, into the ground at least forty-five to fifty times a day … Now that he’s in his seventies, Robin’s lower back remembers those days well.” 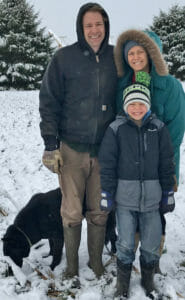 I could imagine walking those miles, feeling the texture of different soils and later feeling all that work in my back. This kind of illustration fades too quickly, and the story of Iowa’s soil turns into a textbook of the history of Iowa’s soil. A section titled “The ABCs of Soil” starts off with this sentence: “The vast majority of Iowa’s soils formed in unconsolidated geologic materials deposited by ice, water, wind, or gravity.” This is good information, but not the start of an engaging story.

While the first section reads like a textbook, the second reads like a review of existing literature, perhaps aimed at readers just becoming familiar with the abuse Iowa’s soil has endured since plow broke sod. Kathleen touches on erosion, the soil food web, the importance of fungi, the dangers of relying on synthetic inputs and other aspects you will find familiar if your bookshelf bows under the weight of soil-oriented books. She includes modern-day success stories about farmers regenerating Iowa’s soils, like Thom Miller, the Rosmann family of Rosmann Family Farms, Steve Berger and Levi Lyle, to name a few.

This book relies heavily on its holder being a student and less of a reader, which was a bit of a letdown for me. Perhaps I put too much stock in Kathleen’s use of “story” in her title. There are hints of her writer’s voice, but her inner storyteller can’t quite get the upper hand over her scientific voice. I am thankful, though, that Kathleen wrote a well-researched book. If this is one of the first titles someone picks up – and if they stick with it – they will be well on their way to understanding Iowa’s remarkable soils.

Jon Bakehouse is a lifetime member of PFI who operates Maple Edge Farm with his wife Tina, son Anderson and parents near Hastings, Iowa. The family raises corn and soybeans, and is integrating goats for grazing with their small cow-calf herd. Jon has also participated in on-farm research with PFI for over six years.

More about “Iowa’s Remarkable Soils: The Story of Our Most Vital Resource and How We Can Save It” 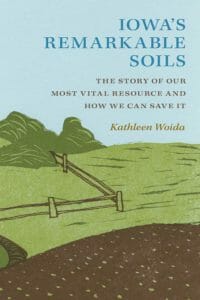 Synopsis: Sometimes called “black gold,” Iowa’s deep, rich soils are a treasure that formed over thousands of years under the very best of the world’s grasslands-the tallgrass prairie. The soils are diverse and complex and hold within them a record not only of Iowa’s prehistoric past, but also of the changes that took place after settlers utterly transformed the land, as well as ongoing adjustments taking place today due to climate change.

In language that is scientifically sound but accessible to the layperson, Kathleen Woida explains how soils formed and have changed over centuries and millennia in the land between two rivers.

In the land hundred years, large-scale intensive agriculture and urban development have severely degraded most of our soils. However, as Woida documents, some innovative Iowans are beginning to repair and regenerate their soils by treating them as the living ecosystem and vast carbon store that they are.

RTVP Week 1: Reduced-Tillage Research at the University of Wisconsin with Rue Genger and Claire Strader