Summer on the Farm

By Liz Kolbe and Practical Farmers of Iowa

Field days have been a cornerstone of PFI’s farmer-led programming since our earliest days – even before we had a name. Over the years, we’ve made changes to how we organize, manage and publicize field days. Some of the changes have been subtle: Few of you would have noticed when we began bringing clipboards or PFI-branded pens. We’ve added microphones, full-color field day guides, event webpages, an evaluation drop-box (and an online evaluation option) – and we even bought a van. Many of you likely noticed those changes!

But like many things that happened in 2020 and 2021, the changes we made to our field day season the past two years were unprecedented. Field days went completely virtual in 2020. And in 2021 we crafted a summer events season that featured in-person and virtual events, and released two separate summer event guides to accommodate a rolling event schedule adaptive to changing public health guidance.

Despite all these changes – good, bad or necessary – the spirit of PFI field days has remained steadfast, rooted in curiosity, creativity and connection. We tend to overanalyze how it happens, but somehow, being on a farm with other people who are gathered in that spirit is impactful. Attendees are inspired to ask new questions and try out new ideas on their own farms. They connect with one another – over shared interests, a shared meal, shared conversation, a summer storm experienced together – and grow those connections into networks and friendships.

The next eight pages share a snapshot of some of our 2021 summer events, including field days, “Catching Up” events and scenes from the sets of “Live From the Farm” episodes. We hope to see even more of you in 2022. 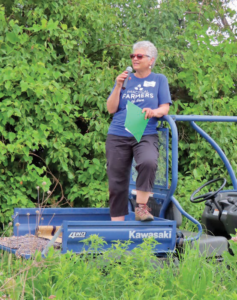 Peg Bouska discusses on-farm conservation efforts during the June 25 event she hosted with her sisters Ann Novak, Carol Bouska and Sally McCoy on their jointly-owned farm near Fort Atkinson, Iowa.

Attendees walked through wheat and oats interseeded with clover at Doug Linker’s farm on June 30 near Chadwick, Illinois. 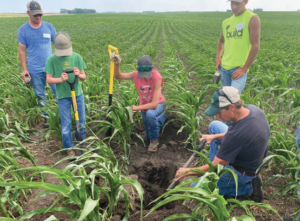 Vaughn Borchardt (with shovel) evaluates a soil pit alongside his two sons and attendees. His event on June 17 near Fenton, Iowa, focused on strip-tilled corn following a cover crop.

A bumblebee visits the hairy vetch flowers among the cover crops at Grow: Johnson County in Iowa City, Iowa. 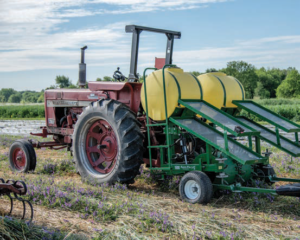 A water wheel transplanter is ready to roll at the Grow: Johnson County farm. 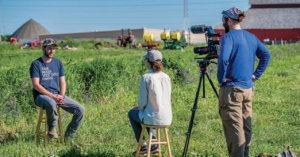 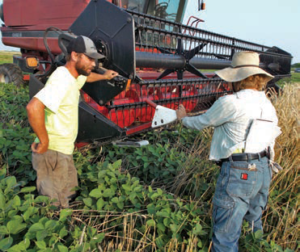 Michael Vittetoe and Ann Cromwell chat at his “Catching Up” event on July 19 near Washington, Iowa. Michael is combining cereal rye that is relay-cropped with soybeans. 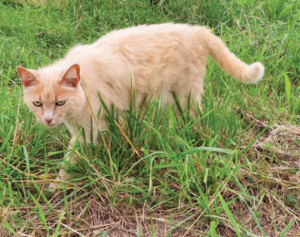 A cat gingerly walks around the guests at Mark Quee’s “Catching Up” event on July 14 in West Branch. 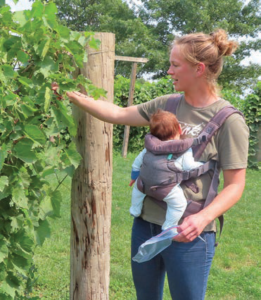 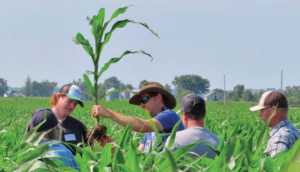 Jon Bakehouse pulls up a corn plant to show attendees the root ball during his event on July 9 near Hastings, Iowa. Jon and his wife, Tina, raise corn and soybeans, a cow-calf herd and are getting started with goats at Maple Edge Farm. 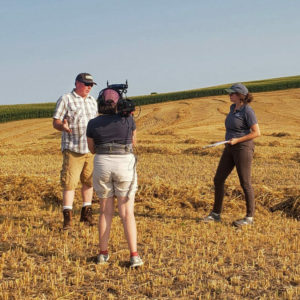 Roger Wilcox of Wilcox Farm shares tips for harvesting small grains from his recently combined oat field near Pierson, Iowa, on July 27. PFI staffers Rebecca Clay (right) and Emma Liddle (with camera) were on site for Roger’s “Live From the Farm” event. 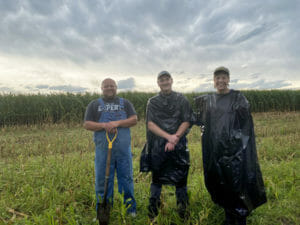 Josh Hiemstra, Zach Laughlin and Becky Wagner (left to right) sport emergency rain protection following the “Live From the Farm” episode at Hiemstra Dairy near Brandon, Wisconsin, on Aug. 24. The group took viewers to see their collection of annual and perennial forages for the dairy, including several co-seeding and interseeding trials. 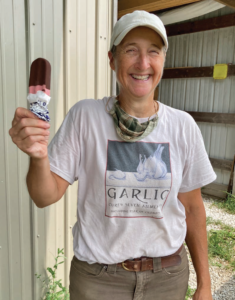 Jill Beebout of Blue Gate Farm enjoys a popsicle after delivering her “Live From the Farm” episode near Chariton, Iowa on Aug. 10. 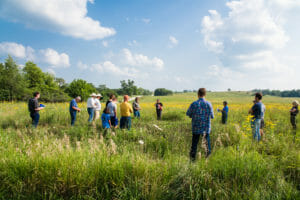 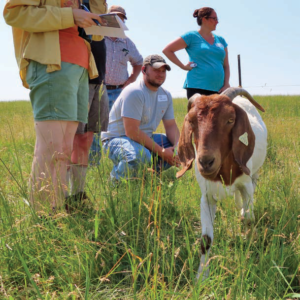 Attendees got chummy with the goat herd during Cheryl Hopkins’ event at Frog Hollow Farm near Walker, Iowa, on June 17. 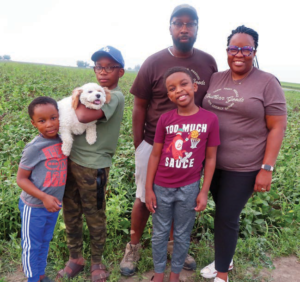 Shaffer and Madelyn Ridgeway, with their three boys and family pup, Sugar, pose in front of a field of purple peas after their “Catching Up” event near Waterloo, Iowa, on Aug. 5. Their farm, Southern Goods, specializes in traditional Southern crops.

Attendees discuss pepper production at Michi Lopez’s vegetable plots during her “Catching Up” event on June 26 near Iowa City, Iowa. This event was hosted in Spanish and English.

Curt Miller and Randy Reidinger catch up with Diane and Ivan Arenson (left to right) during the Arensons’ event near Hinton, Iowa, on July 2. The day focused on prairie restoration and managed grazing.

Jordan Scheibel (center in gray T-shirt) demonstrates how he mists flats on his outdoor germination table (and keeps the critters off). Jordan’s event on July 30 focused on low-tillage production techniques at his farm, Middle Way Farm, near Grinnell, Iowa. 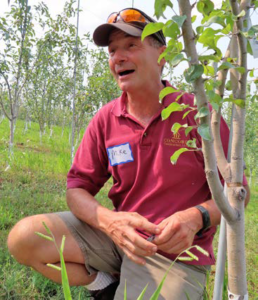 Mike Malik of Long Lane Orchard near Solon, Iowa, answers questions about his high-density trellis system for apples on July 29. 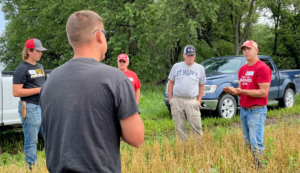 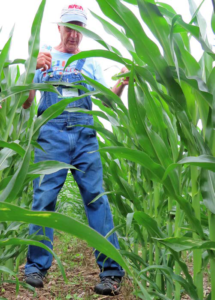 Dick Sloan looks down at the clover cover crop established as part of a PFI on-farm research project prior to his corn planting. Dick discussed this research during his June 29 “Catching Up” event on his farm near Rowley, Iowa.

Landon Brown poses near his roller-crimper, which was the feature of his event on June 24 near New Providence, Iowa. 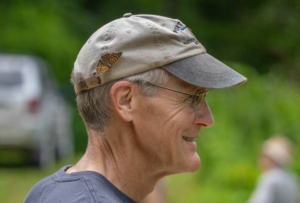 A frittilary butterfly rests on Bill Ohde’s cap during the “Catching Up” event at Amund Bartz’s land, which focused on habitat restoration and management, on June 24 near New Albin, Iowa. 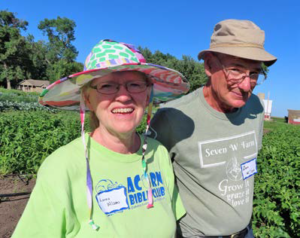 Dan and Lorna Wilson look at the vegetable fields at John and Janna Wesselius’ farm, The Cornucopia, near Sioux Center, Iowa, on Aug. 11 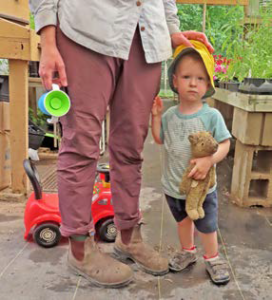 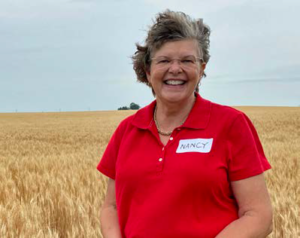 Nancy Brannaman braved the wind for a photo by her wheat field following her June 24 event near Streator, Illinois.

The Bennett family poses following their field day near Galva, Iowa, which focused on cover crops and organic field crops on their 2,000-acre farm. From left: Danielle, Harry and Sam Bennett; LuAnn and Alan Bennett; and Cory Bennett. 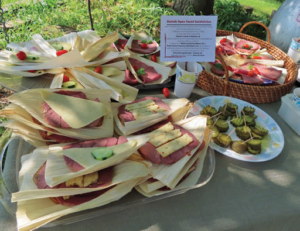 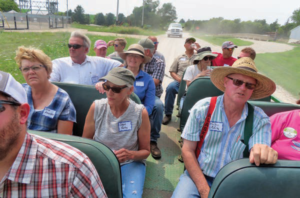 Attendees at Alec and Rachel Amundson’s field day take a ride in a deluxe people mover to a soon-to-be-harvested rye field on July 13, near Osage, Iowa. 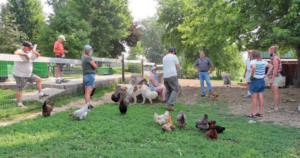 Attendees stop in the poultry pen during The Walker Homestead’s field day near Iowa City, Iowa, on Aug. 1. 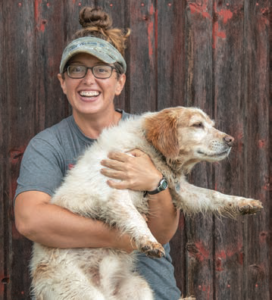 Dayna Burtness of Nettle Valley Farm wrangles her farm dog, Buddy, into a photo following her field day on Aug. 7 near Spring Grove, Minnesota. Joining Dayna as hosts were Bailey Lutz, of Listenmore Farm, and Heidi Eiger of Radicle Heart Farm, whose farms are located at Nettle Valley Farm. 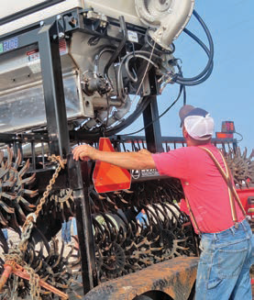 Nick Baker looks at a rotary hoe for interseeding cover crops that Mick Zoske brought to the field day at Plagge Farms. 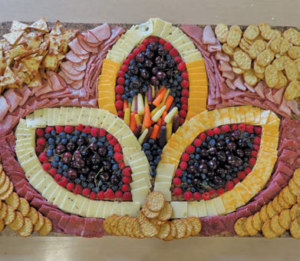 The PFI logo comes to life in a cheese and fruit tray at the Bennett field day. 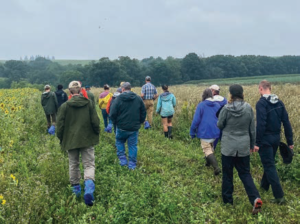 Attendees walk across the pastures at Nettle Valley Farm (soon to be chased back by a thunderstorm). Hosted in partnership with the Xerces Society, the field day focused on silvopasture and the role of livestock in forestry management. 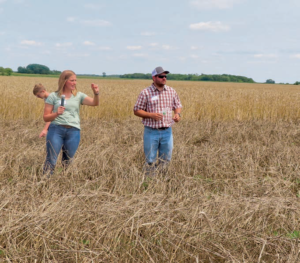 Rachel and Alec Amundson discuss harvesting rye. They raise corn, soybeans and rye at Green Country Farms, and have been relay-cropping since 2018. 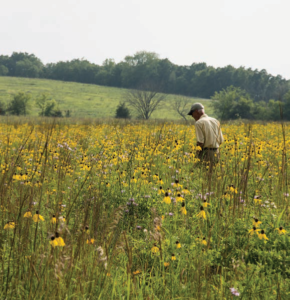 An attendee to Don Eyerly’s field day near Winterset, Iowa, walks into a restored prairie. The field day on July 22 focused on habitat restoration and conservation programs.

Attendees wade into the soybean field at Plagge Farms (Landon and Ann Plagge) near Latimer, Iowa, on Aug. 6. The Plagges discussed how they plant soybeans “green” (into a standing cover crop), as well as their seed cleaner and cover crop business.