“The Best Beef You Can Bite”

The Sawyer family has farmed in Iowa since the 1850s. Neal and Lucie Sawyer represent the fifth generation to uphold this tradition. Neal’s grandfather bought the farm near the Mississippi River town of Princeton, Iowa, in 1948, officially establishing it in 1950. He eventually passed the farm to Neal’s dad, Norman Sawyer, who decided in the late 1970s to begin Sawyer Beef, selling corn- and hay-fed beef to the community. Being near the Quad Cities region, which spans Iowa and Illinois, has posed a convenient and enthusiastic market for “the best beef you can bite,” as the Sawyers describe their product. 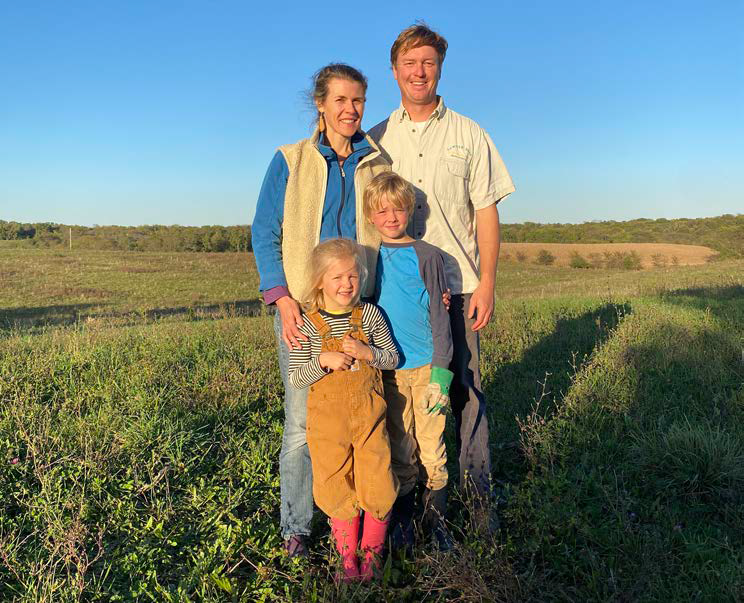 Neal grew up with the cattle and crops, then ventured into the world. He went to college, joined the Peace Corps and later met Lucie, his future wife. In 2005, Neal and Lucie came back to Sawyer Beef and began transforming it into a formidable grass-fed beef operation. When he returned, Neal worked with his dad to make changes and connections, like growing a predominantly Angus cow herd. Neal learned of PFI in 2006 while visiting Lucie, who was finishing her graduate degree and shared classes with students in Iowa State University’s sustainable agriculture graduate program. He attended PFI’s annual conference that year and has been a member since.

It was in 2008 that Neal and his dad plunged into intensive rotational grazing. “To some degree, my dad had always done a little bit of rotational grazing,” Neal says. “But it was two pastures back and forth all summer.” The first 90 acres were split into 10-acre paddocks. After two years, Neal and Norman divided the remaining 300 acres into paddocks. As business grew, so did demand for grass-fed and grass-finished beef. The Sawyers proceeded in the same manner, first finishing two animals on grass, then six when that was a success. Neal estimates that in 2013, grass-fed beef made up about half of his total sales alongside corn-fed beef.

Neal moves his 100 cow-calf pairs as often as every 12 hours to ensure they always have fresh forage available. He planned the cell size so it was large enough not to crowd the cattle, but small enough so they could consume or trample all the grasses in a given paddock. The trampled, mowed and fertilized grass develops a deeper root system, taller structure and definitive seed bank. Neal tracks the movements of the cattle to maximize this paddock rest period and let the grass rebound. In a typical summer, the paddocks are grazed three times each. Neals says the cycle promotes “healthy soils, grasses and cows that go on to produce delicious, nutrient-rich beef.” He adds: “The system also ensures that a grass-fed Sawyer cow only ever ingests what it grazes.” This is true even during the winter, when the cows graze the neighbor’s cornstalks or hay baled from the fields.

Livestock herding and handling is a 365-day-a-year job. A typical day for Neal involves the regular chores, like feeding his corn-fed finishing cattle and moving the grass-fed cattle to fresh grass. This year, Neal is raising fewer corn-fed animals due to the high price of corn, leaving more time for cow rotation.

Neal decided that a PFI lifetime membership would be a meaningful tribute to his dad, who died in 2020. A few of Neal’s friends sent in donations, which Neal combined with his own donation. The gift honors the five-generation Sawyer Farm legacy and shows his dedication to his community. “We were the first people to go no-till in Scott County,” Neal says. “[Our community is] the reason we’re doing natural beef, retail cuts and grass-fed beef. We both benefited from learning about other people.”

Neal looks forward to engaging even more with PFI’s content in the future. He’s most enjoyed the networking, farmer knowledge-sharing and connections that make up PFI.

“I like hearing about new ideas and ways of thinking about how people are managing their farm and trying out things. That’s certainly what I get from this community.”

Review of “Iowa’s Remarkable Soils: The Story of Our Most Vital Resource and How We Can Save It”