Selling wheat straw, Angela Knuth and her family have found a steady stream of income in a volatile commodity market.

When Angela Knuth joined her husband Kerry’s third-generation family farm, Knuth Farms, near Mead, Nebraska, she didn’t have experience with a row crop operation. Today, she is in charge of precision agriculture technology on the farm. 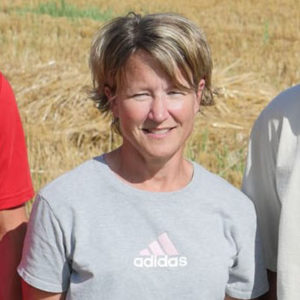 “I didn’t grow up on a commodity farm that grew corn or soybeans,” Angela says. “I grew up on a small farm with a lot of animals.”

After college, Angela moved back to Mead, Nebraska, her hometown. In 1992 she married her husband, Kerry, and became interested in learning more about his family’s corn and soybean operation.

Angela started out on the farm by washing equipment, driving seed and chemicals out to the field and helping run the grain cart. During these early days, she also did a lot of internet research. “I read about farmers like Dave Brandt in Ohio, who were talking about soil health already, and I started going out to our fields and observing things for myself,” Angela says. “I noticed that after tillage, the soil was cloddy and loosened within those first 6 inches.”

From her research, Angela knew that the top 5 to 10 inches of soil had the highest biological activity, so she began to question how Knuth Farms’ tillage program was benefitting the farm and their bottom line.

In 2004 the Knuths’ took their first step towards increasing their soil health by no-tilling during the soybean year of their rotation. The following year, the Knuths switched from conventional tillage to strip-till on their corn acres. But the real turning point came in late 2012.

Corn prices were starting to trend downward from their all-time high and the Knuths wanted to explore ways to make a profit that could also help them further build the soil and reduce their inputs. “I started looking at the season itself,” Angela says. “Our growing season is roughly 190 days. The idle season is almost as long. How could we utilize more of the season and turn a profit?”

Seeking to grow more during that idle season, the Knuths were approached about a program offered in 2013 by the University of Nebraska that paid farmers to grow food-grade wheat for a specialty market. The Knuths had never raised wheat before but were open to trying new things. “I realized that growing wheat created an opportunity to move in the direction of soil health,” Angela says. “Planting in the fall and harvesting mid-summer opened up new windows of the year for us to add diversity to our rotation. It also allowed us to better spread out our workload.”

That first year, the Knuths received a premium from the university program and grew 200 acres of wheat. But the premium was only offered for one year and wheat prices began to trend down again a few years later. Rather than stop growing wheat, the Knuths found a way to keep it in the rotation – and remain profitable – in the face of changing markets: selling small square bales.

Finding a Steady Market in Straw

“Straw and other forages have given us contact with customers. And now that we’ve been at it long enough, we have customers returning each year.” -Angela Knuth

“Straw has been the anchor of our wheat program,” Angela says. “It’s a steady source of income.” Unlike grain prices, the price of straw does not fluctuate as widely. Even in years with low grain prices, the Knuths keep wheat in their rotation to maintain their straw customer base.

The straw from small-grain crops like wheat is harvested after the grain in the middle of the summer. It can be packaged in various shapes depending on the baling equipment used, but is most commonly found in small squares or large rounds. The straw is primarily marketed to livestock operations to be used as feed or bedding, but smaller bales are often popular with individuals or other businesses.

Small square bales make up the majority of the Knuths’ straw harvest. They produce between 5,000 and 6,000 small square bales a year, which they market to a variety of outlets. “We sell most of it to a feed store, but people buy a handful of bales for their animals and others will buy bales during the fall for holiday decoration,” Angela says. To get the word out, the Knuths put ads in the local paper and in farm magazines.

All the bales that don’t go to the feed store are directly marketed, which the Knuths enjoy. “We don’t get to direct-market with our commodity crops. They just go to the elevator,” Angela says. “Straw and other forages have given us contact with customers. And now that we’ve been at it long enough, we have customers returning each year.”

The Knuths also learned from one of their customers about renting bales, which is especially compatible with outlets, like stores, that only need them seasonally. After a customer is done renting the bales, the Knuths are able to sell those bales to someone else, generating more income. The steadiness of the small-bale market has made it a vital component of the family’s wheat crop. Says Angela: “In years of low [wheat] prices, the grain is the gravy on top.” 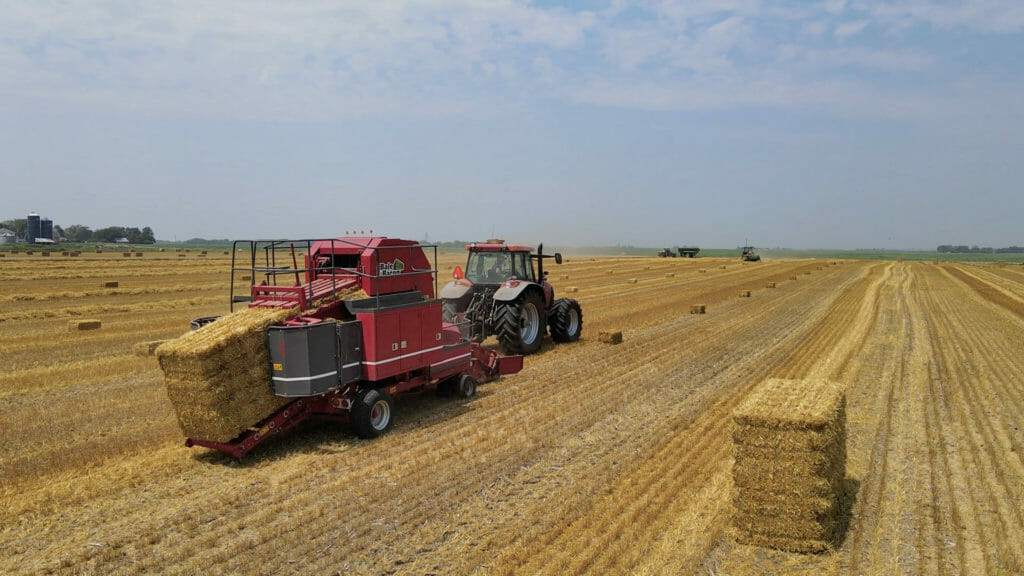 The Bale Baron, a machine that accumulates small square bales in packs of 21, which makes for streamlined transportation.

But harvesting and marketing straw takes added work. When they were first starting out, the Knuths found the process to be very labor-intensive. The first year they hired a custom-baler. The baler would drop the small squares every 6 feet along the windrows and the Knuths had to come back with a hayrack to pick up the bales and stack them together – no small feat when harvesting thousands of bales. “Thankfully, we had two high-school aged boys, Gregory and Garrison, who were up for the tasks with friends,” Angela says.

After the first year, the Knuths bought their own baler so they wouldn’t have to hire out the custom work. But they still had to find the labor to stack the bales in the hayrack. So they got creative. “Our local school had a fundraiser with a live auction, and for a couple years we had people bid on a ‘bale party’,” Angela says. “We’d call the winners when the straw bales were ready and they would spend a few hours picking up and stacking with us out in the field.”

Word got out, and the Knuths hosted a few large groups for these parties. After helping to stack the bales, the Knuths invited the group to a barbecue back at their home place. “I think there’s something unique about baling straw that attracts people,” Angela says. “They enjoy the simplicity and the slow steady rhythm of the baler as it chugs along. A lot of people grew up doing it. It’s fun for them to be out in the field again.”

Through the years, the Knuths have been able to streamline their straw harvesting process. They now hire a neighbor to use a Bale Baron, a machine that goes through the field and scoops up the small square bales in packs of 21, eliminating the need for big groups to tackle the labor. While they still get requests from people who want to help during the summer, the added equipment has been invaluable to the family’s workflow. 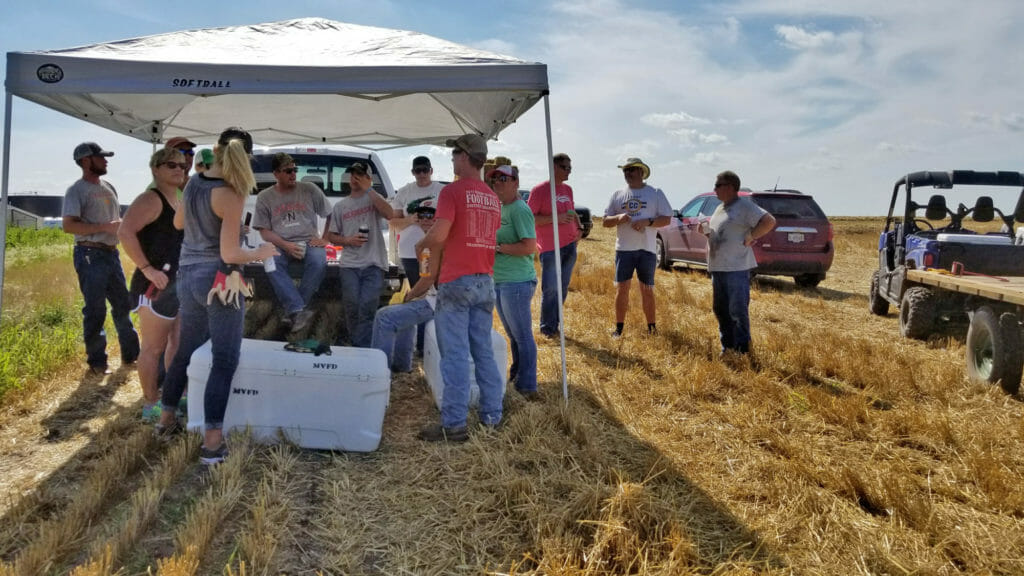 The winners of the ‘baling party’ gather on the Knuth’s farm.

While the consistent cash flow from wheat straw is a huge asset, having wheat in the rotation has other benefits. Angela says it gives them a large window to experiment with cover crops. “This past summer with the advice of our consultant, we planted a 17-species mix after harvest to build soil health,” she says.

The Knuths have also noticed other benefits across the rotation, like a 10-bushel per acre yield bump, on average, in the corn planted the year after wheat. “Soil health and economics are related,” Angela says. “If we can maintain or increase yields, reduce inputs by growing our own nitrogen and suppress weeds with cover crops, that keeps more money in our pockets.”

Angela continues to observe her fields and notes that even though the family is still early in their soil health journey, some results are already evident. “We have much better water infiltration now,” she says, “and our soil looks and feels so much better in the spring when there’s been a cover crop.”

In her local area, wheat is still fairly uncommon. “Small grains, cover crops, growing your own nitrogen – they are changes worth exploring.”

Doing the Math and Picking a Market for Straw Profitability