Sustainability to Benefit Farms and the Future 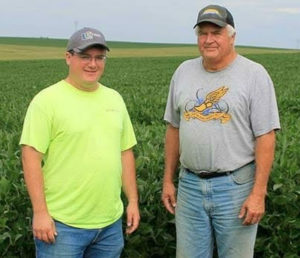 Dan Voss with his son Brian

Dan Voss is a lifelong farmer from Atkins, IA; he joined Practical Farmers of Iowa in 2017 to gain a sense of community with fellow Iowa farmers. In addition to operating Voss Farm, Dan is also a retired rural letter carrier with the United States Postal Service, a career he is proud of and says, “goes great with farming!”

Today, Dan is busier than ever managing a 670-acre diversified farm on the outskirts of the Chain-O-Lakes Wildlife management area, specializing in corn, soybeans, hay and small grains, all of which he manages on extended rotations in an ongoing effort to improve the soil quality of his land.

Often employing local students, Dan tries to instill a mindset of sustainability on his farm, aware that he is employing (and educating) future farmers. In speaking about conservation, Dan likes to look at the big picture.

“It’s not just my lifetime, it’s the succeeding generations. Soils are an important resource for us. We get our food from them, and the more we degrade them, the more fertilizer we need. The more we have to do to our soils for viability, the more degraded they become.”

Dan has always believed that conservation is an important and integral part of his family’s farm. He grew up with dairy cows and saw how hay could not only be a cash crop, but a part of sustainable crop rotation. Dan’s mission has been to integrate conservation practices into his farm, but he hasn’t done it alone.

In 2016, Dan signed up for Conservation Stewardship Program (CSP), empowering him to expand his farms conservation impact. CSP is a working-lands conservation program offered by the U.S. Department of Agriculture’s (USDA) Natural Resources Conservation Service (NRCS).

“I wanted to become involved in this program because we’re losing topsoil above replacement rates,” he says, “and I wanted to do my part in slowing that process down.”

As part of his CSP contract, Dan installed a bioreactor in the fall of 2021 as well as a saturated buffer along his outer corn rows. He has also strategically planted pollinator habitat strips alongside the saturated buffer zones that provide critical habitat and food for species such as the monarch butterfly. He’s also used support from CSP to establish wildlife corridors on his farm. 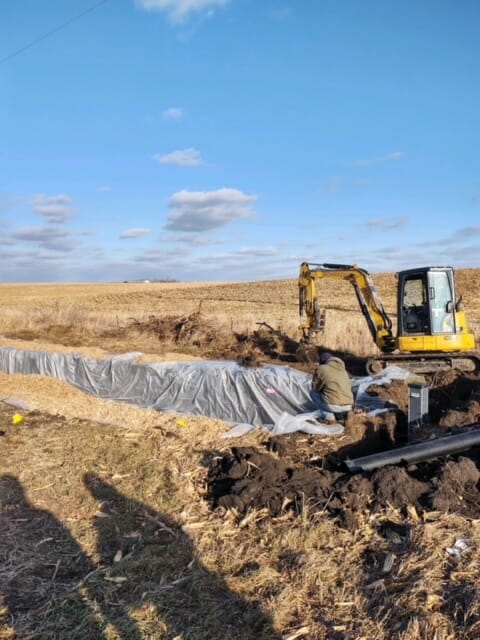 “There is always more that can be done,” Dan says.  “Not only on my farm, but in all of Iowa, and I feel that being involved with a program like CSP is the gold star of conservation. I’m very proud of our efforts on Voss farm.”

Dan plans to continue working with the CSP program. Already he is planning on installing more pollinator habitat in the spring of 2023 as well as four more bioreactors and a new prairie strip. “I’ve been no-till for 33 years, and extended rotation for nearly that long as well. Now I’m also implementing soil testing and a wider variety of cover crops.”

To increase microbial diversity on his farm, Dan has received funding to plant a more diverse mix of cover crops that include not only oats and cereal rye, but also camelina, radishes and nitrogen-fixing clover. He is especially excited about the camelina grass as it has the ability to overwinter and further reduce topsoil erosion. 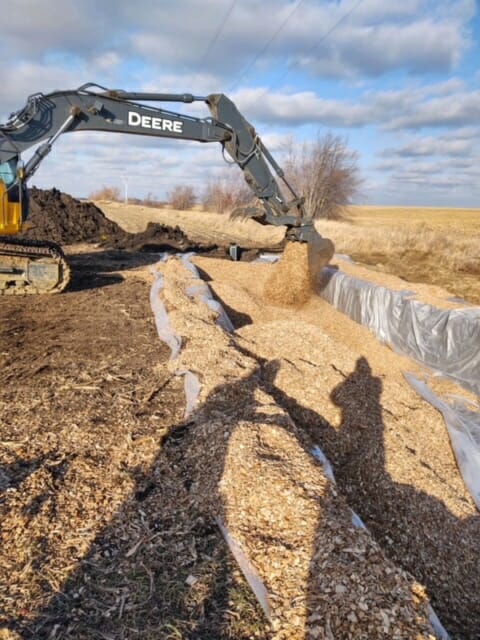 You Get Out What You Put In

Dan admits that the CSP program can sometimes be a bit difficult to work within, especially when the program’s timeline for cover crop planting doesn’t always work in years where harvest of corn and soybeans is slow. “It can be tricky, but they [NRCS] are a great group of people, and will work with you when the unexpected happens. I’ve never had any real problems.”

With a focus on conservation, and with assistance from programs like the Conservation Stewardship Program, Voss farms has seen an improvement in soil quality and overall farm health. It’s been a lot of work along the way, but Dan knows that it’s been worth it.

“When we get a heavy rain, the soil seems to soak up the water better,” he says. “We don’t have ponding. Also, our soybean yield has improved, I believe, in part due to increased soil health.”

“Some of these projects have been difficult or time consuming, but you get out what you put into them. We should, as people, be more in touch with the earth. That’s what I love about farming. I like that you start in spring, you plant these little seeds and then you get a crop. You’re always planning ahead to the seasonality of things, and in the slow times, there is time to reflect and be grateful.”

Farmers and landowners interested in learning more about CSP and other conservation programs can click here for a series of fact sheets on the most popular programs or can visit their local USDA Service Center.

What Do Practical Farmers of Iowa Farmers Have in Common? Commitment, Context, Carbon and Community