Dean and Judy Henry of Nevada will receive PFI’s 2023 Sustainable Agriculture Achievement Award; award will be presented Jan. 20, in Ames 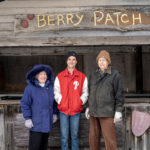 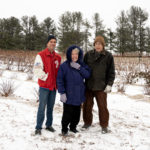 AMES, Iowa — Dean and Judy Henry, long-time owners of The Berry Patch Farm near Nevada, Iowa, have been chosen to receive the 2023 Sustainable Agriculture Achievement Award from Practical Farmers of Iowa.

The award is given each year by PFI to an individual or couple that has shown exemplary commitment to sustainable agriculture, generously shared their knowledge with others and been influential in efforts to foster vibrant communities, diverse farms and healthy food.

The award will be presented on Friday, Jan. 20, at 5:20 p.m., in the Iowa State Center Scheman Building during Practical Farmers’ 2023 annual conference, “On Common Ground,” in Ames. Pre-register by Jan. 12 at practicalfarmers.org/2023-annual-conference.

For more than 50 years, the Henrys have raised a variety of orchard fruits, berries and other horticultural crops, both familiar and less common, on their 140-acre farm south of Nevada, where they have introduced generations of Iowans to community-focused agriculture, locally raised produce and land stewardship.

Farming with their son, Mike, who has been an integral part of the farm’s operations for many years, the Henrys have experimented with a range of vegetable and fruit crops over the years both outdoors and in greenhouses.

Today, they raise apples; strawberries; blueberries; red, black and gold raspberries; elderberries; red and black currants; strawberries; tart cherries; gooseberries; rhubarb; pumpkins; decorative gourds; and, most recently, honeyberries – all of which they market through U-pick. They also operate an on-farm store and sell their produce to local restaurants, stores and through partnerships with local CSAs.

“The Henrys are lifelong stewards and adventurers in growing food, improving soil and nurturing community,” says Jill Beebout, co-owner of Blue Gate Farm near Chariton, Iowa, who nominated Dean and Judy for the award.

“For decades, they have kept their fingers on the pulse of the produce industry, trialing interesting new crops and trends and always generously sharing the information they glean with other growers and the public.”

Dean and Judy were among the first growers in central Iowa to raise strawberries for local markets, starting their first plants in the late 1960s before they moved to the farm that would become The Berry Patch. Strong local food advocates, the Henrys helped found a farmers market in Ames, Iowa, in 1968 and were familiar faces for many years at several central Iowa farmers markets, including the Des Moines Downtown Farmers’ Market.

They introduced the concept of U-pick to central Iowans and were early pioneers of using diverse cover crops and crop rotations to build soil health.

“Our strategy was to have something diversified through the whole season,” Dean says.

Through diligent soil sampling, crop rotation and extensive cover cropping each year with marigolds, cereal rye, tillage radishes and yellow mustard, they Henrys have doubled their farm’s organic material while rehabilitating land Dean says had been “pretty abused by cattle buyers” before he and Judy purchased it.

Over the years, Dean and Judy have also shared their knowledge widely through workshops, farm tours, speaking engagements, participation in groups like the North American Raspberry and Blackberry Association and through Judy’s long-running farm-based preschool that was years ahead of the farm-to-school movement.

“We were doing farm-to-school before there was a name for it,” Judy says. “The preschool was a good way to transition between spring and the busier growing season. We were done by April or May and could put our full energies into the summer crops.”

In 1995, the Henrys joined PFI after learning about the group from Ryan Thompson, son of PFI co-founders Dick and Sharon Thompson. At the time, Dean was teaching science at Des Moines Area Community College – a career he maintained for over 30 years in addition to farming.

“Ryan was in my class at DMACC,” Dean says, “and said I should meet his dad because he had crazy ideas [about farming], like me.”

Since joining, the Henrys have hosted many field days, spoken at PFI’s annual conference – a commitment they will continue at PFI’s 2023 annual conference, sharing their many years of experience running a U-pick operation – conducted on-farm research and participated in PFI programs like Labor4Learning to help mentor the next generation.

Committed to Local and Long-Term Sustainability

The couple met in 1956 while both were attending Moody Bible College in Chicago. Judy, who grew up near Philadelphia, was studying education and Dean, who grew up in Ames, was studying science. They returned to Ames and married in 1959, both continuing their studies at Iowa State University.

Over the course of their long farming career, they have seen changes in the agricultural landscape, customer preferences and awareness of local foods. While some of that change has meant more competition and shifting consumer and market dynamics, the Henrys have also had a chance to see the impact their farm has made.

“I’ve seen more adults wanting to know where their food has come from, and wanting to pass that on to their kids,” Judy says.

Recounting the birthday wish of a long-time customer, Mike shared a recent anecdote to illustrate the affection customers have forged with the business. “She turned 100 years old,” he says, “and wanted to pick apples here for her birthday.”

Despite all the change, the Henrys’ commitment to holistic sustainability – and to an authentic experience of an Iowa farm – has never waivered.

“We’d like to be here next year – that’s sustainability in one sense,” Dean says. “In a larger sense, we want to pass the farm onto the next generation without it being worn out, so we work on keeping the soil in good shape.

“Why do we do all this? There are some orchards that buy cherries and blueberries and resell them – but they’re not the real thing. They’re not fresh off the farm.”

“I’d like the farm to continue,” Judy says, “and for someone to appreciate what’s here and keep it growing.”

About Practical Farmers: Practical Farmers of Iowa works to equip farmers to build resilient farms and communities. Our values include: welcoming everyone; farmers leading the exchange of experience and knowledge; curiosity, creativity, collaboration and community; resilient farms now and for future generations; and stewardship of land and resources. To learn more, visit http://practicalfarmers.org.